NDSU, Coach Prime and 45 Numbers to Know for the 2022 FCS Season | The Analyst 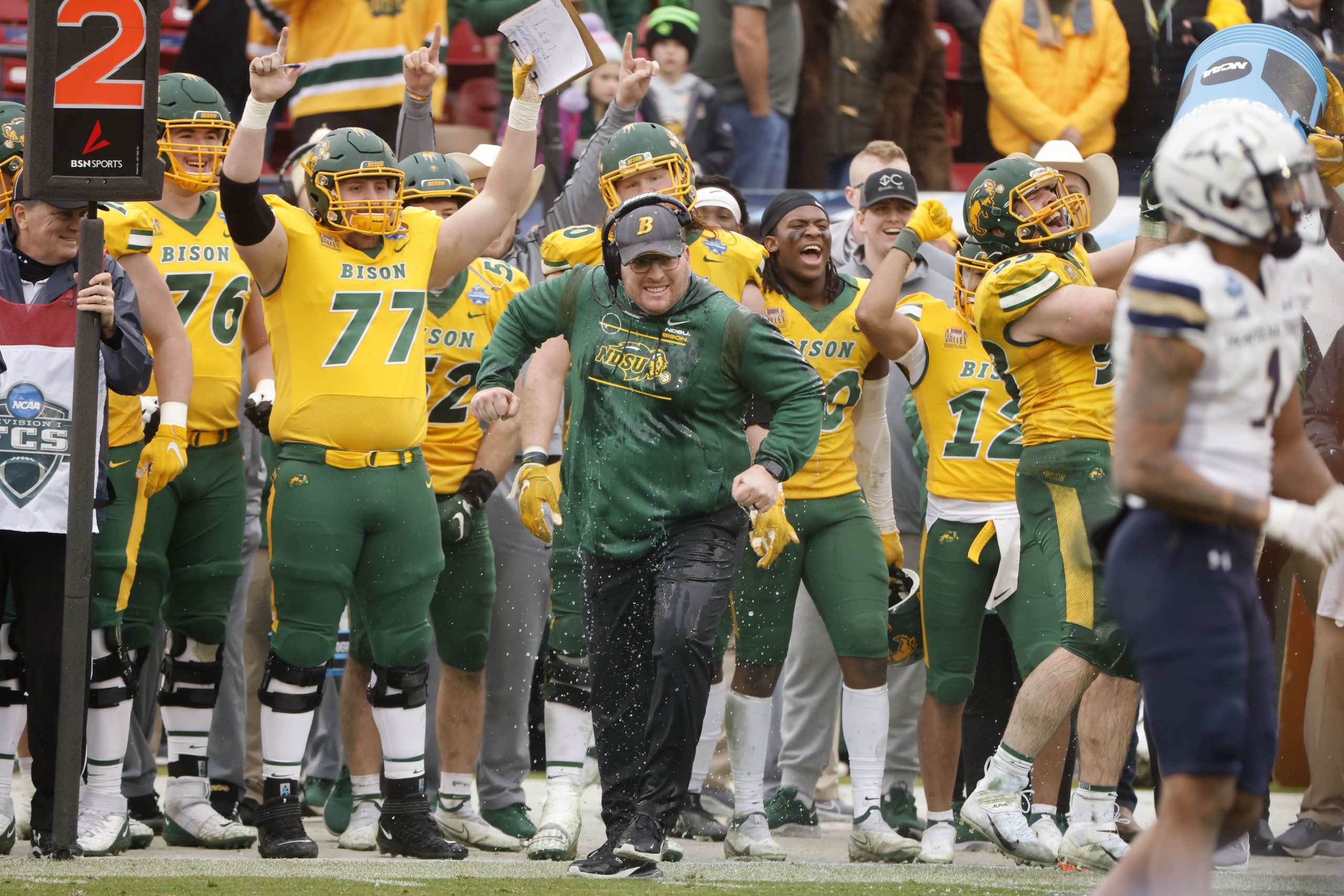 NDSU, Coach Prime and 45 Numbers to Know for the 2022 FCS Season

The numbers won’t lie during the 2022 FCS college football season.

Not as long as North Dakota State’s dynasty patrols the Division I subdivision, scooping up everything in sight.

It goes way beyond the Bison, however. With a record number of teams this season, the 45th season of FCS football will have plenty of numbers to know.

Here are 45 to know heading into the anticipated campaign:

0 – The combined 2021 wins total of Houston Baptist and Wagner, who get a fresh start with a new season.

1 – Travis Hunter, a combo defensive back/wide receiver, was considered by some recruiting services as the nation’s top high school recruit when in February he flipped a verbal commitment to Florida State to join one of that school’s more-famous former players, coach Deion Sanders at Jackson State.

2 – Appalachian State linebacker Dexter Coakley (1995-96) is the only two-time recipient of the Buck Buchanan Award, but the last two national defensive players of the year are back in the Southwestern Athletic Conference – defensive ends Jordan Lewis of Southern (2020 season) and Isaiah Land of Florida A&M (2021).

3 – Big South member Gardner-Webb is the only FCS program that will face three FBS opponents: Coastal Carolina, Marshall and Liberty.

3 (and again) – The number of FCS conferences out of 15 – yes, three, with the Ivy and Patriot leagues and the Southern Conference – that have not had a member change or announcement of a future move since last July. (2022 season changes)

3 (because it’s a good number) – The number of FCS programs that can add to their current streaks of conference championships – Davidson (Pioneer, two), Holy Cross (Patriot, three) and Sacred Heart (Northeast, two).

4 – The Southern Conference seeks to lead the FCS in rushing for the fourth straight season, armed (or is it legged?) with four players who have surpassed 1,000 yards in a past season: Chattanooga’s Ailym Ford, The Citadel’s Alex Ramsey, ETSU’s Jacob Saylors and Furman’s Devin Wynn.

5 – The number of games in which SoCon champion ETSU overcame a fourth-quarter deficit for a win last season – more than any FCS team.

6 – FCS champion North Dakota State’s winning streak against FBS opponents since 2010. The Bison will likely be favored when they visit Arizona on Sept. 17.

6 (again, and simply too good) – The number of two-point conversions scored last season by Presbyterian running back Delvecchio Powell II, matched by only one FCS team (Eastern Washington).

7 – The record number of games that involve FCS programs when the season kicks off in Week 0. (Best season-opening games)

9 – In its last nine seasons, at least two Ivy League teams have ranked in the top 20 in the nation in scoring defense, with Dartmouth and Harvard ending third and fifth, respectively, last season.

9 (again) – Given James Madison’s FBS departure, CAA Football will be put to the test of extending its streak of seasons with at least one playoff semifinalist.

12 – Samford’s visit to Georgia on Sept. 10 means an FCS program will play the reigning FBS champion in a 12th season over a 14-year span.

15 – The number of consecutive winning seasons at Big Sky power Eastern Washington, the longest active streak in the FCS.

17 – The number of returning first-team Stats Perform postseason All-Americans from the 2019, ’20 and ’21 squads, including a pair of teammates last season – Montana linebacker Patrick O’Connell and cornerback Justin Ford.

18 – The number of MEAC titles won by reigning Celebration Bowl champ South Carolina State, one more than the combined total of the conference’s other five current programs.

22 – The number of new head coaches in the FCS, with the SWAC having the most (four).

24 (again) – Who will make the FCS playoffs for the first time? There are 24 possibilities, with Bryant and Campbell in the Big South and Mercer in the Southern Conference perhaps the strongest candidates.

25 – Chima Uzowihe’s Big South record of 25 sacks at Liberty from 2012-15 could be threatened by Charleston Southern’s Anton Williams (19) or Campbell’s Brevin Allen (16).

37 – The Southern Conference all-time sacks record that is well within reach of Chattanooga defensive lineman Devonnsha Maxwell, who has 29.5 and is pursuing a former Moc, Davis Tull.

38 – The career touchdowns of UC Davis running back Ulonzo Gilliam Jr., the most among active FCS players.

43 – The SWAC enters the campaign having led the FCS in attendance average in all but one of the subdivision’s first 44 seasons.

75 – The Colonial Athletic Association is celebrating its 75 years as a conference and the Ohio Valley Conference is holding its 75th anniversary season in football.

100 – Each of the three returning ASUN programs has a kicker coming off a perfect 100 percentage on PAT attempts – Central Arkansas’ Hayden Ray (52 of 52), Eastern Kentucky’s Patrick Nations (34 of 34) and Jacksonville State’s Alen Karajic (28 of 28).

100 (again) – This is the centennial celebration season for OVC member Tennessee Tech, which will play five of its 11 regular season games at Tucker Stadium.

130 – The record total of FCS programs this season, including newcomers Lindenwood (Ohio Valley), Stonehill (Northeast) and Texas A&M-Commerce (Southland), but it’s also the final one in the subdivision for FBS-bound Jacksonville State and Sam Houston.

158 – What college football’s most-played rivalry will turn when Lafayette hosts Lehigh on Nov. 19.

228 – The points responsible for by Kennesaw State quarterback Xavier Shepherd last season, the most of any returning FCS payer and including a national-high 23 rushing touchdowns.

497 – The NCAA all-divisions record total of consecutive games that Dayton has scored in since 1976.

500 – With 364 career tackles, Montana safety Robby Hauck is within striking distance of the half-century club. Only three players have reached that milestone since the NCAA began to chart defensive statistics in 2000.

500,000 – After playing before announced crowds of 461,015 last season, Jackson State could surpass a half million this season if the Tigers repeat in the SWAC and return to the Celebration Bowl. With Coach Prime as a draw, all of their games are in stadiums that seat at least 22,000 fans.