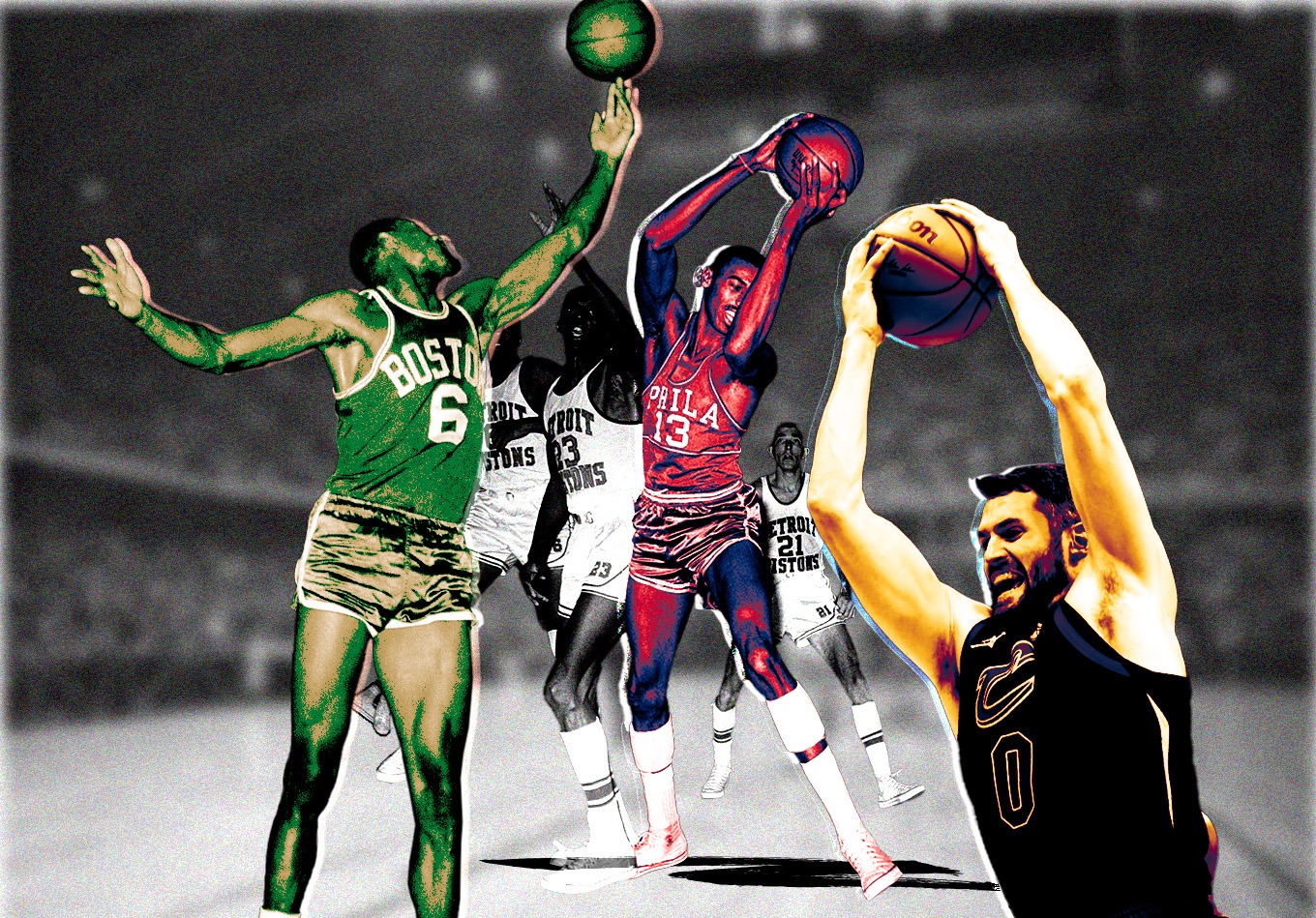 Cleaning the Glass: The Most Rebounds in a Regular-Season and Playoff Game in NBA History

Long before he did the same with his hair, Dennis Rodman turned rebounding into an art form.

The five-time NBA champion and arguably best rebounder of his generation won a record seven straight rebounding titles between the 1991-92 and the 1997-98 seasons while playing for the Detroit Pistons, San Antonio Spurs and Chicago Bulls.

Fellow Hall of Fame player Wilt Chamberlain ended up with a total of 11 rebounding titles, but he never won more than four in a row.

So how did Rodman do it? By working at it.

“I practiced a lot focusing on the angle of the ball – the trajectory of it,” he explained on “The Last Dance” documentary miniseries. “Basically, I just learned how to put myself in position to get the ball.”

But as great as he was, Rodman never had more than 34 rebounds in an NBA game. That effort came during the 1991-92 season when he averaged a career-high 18.7 boards. But his 34 rebounds aren’t even close to the single-game record.

Here’s a list of the NBA players who cleaned the glass better than anyone else in NBA history in one historic effort.

Most Rebounds in a Regular-Season Game

It likely wasn’t just another regular-season game for the four-time MVP when Bill Russell and the defending champion Celtics visited Philadelphia Arena for an early season showdown. He pulled down more boards in one night than any other player in NBA history, but he shot just 15 for 42 from the field (34 points) in a 132-129 loss to Boston. He finished with 45 rebounds on two other occasions: Feb. 6, 1960 against the Syracuse Nationals and again about a year later against the Los Angeles Lakers.

Russell became the first player to reach the half-century mark in boards on this night. But his record performance against the Nationals at the old Boston Garden only stood on top for about nine months until Chamberlain smashed it in front of Russell in Philadelphia. It’s hard to believe that Russell was reportedly slowed by a charlie horse as he broke his own mark of 49 set two years earlier. He would hit 49 again on March 11, 1965 against the Detroit Pistons.

Most Rebounds in a Regular-Season Game in the 21st Century

Love finished with 31 points and 31 boards in a 112-103 win over the Knicks, becoming the first player to post a 30-30 game since Moses Malone of the Houston Rockets did it against the Seattle SuperSonics in 1982. Long the best player on a Timberwolves team that wasn’t very good, Love was also the first player with 30 rebounds since Charles Barkley 14 years earlier. Nobody had a 30-30 after Love until Dwight Howard did it for the Charlotte Hornets against the Brooklyn Nets on March 21, 2018.

Most Rebounds in a Playoff Game

Another big game against Russell – this time in the playoffs. Chamberlain stepped up with 20 points, nine assists and an NBA-playoff record 41 boards in a 115-104 win over the Celtics that gave the Philadelphia 76ers a 3-0 series lead. After topping rival Boston in five games, Wilt, who averaged 29.1 boards and 9.0 assists that postseason, won his first NBA title when the 76ers beat the San Francisco Warriors in six games.

Most Rebounds in a Playoff Game in the 21st Century

Biyombo set a Toronto franchise playoff record in a 99-84 victory over LeBron James and the eventual champion Cavs in Game 3 of the Eastern Conference finals. Biyombo wasn’t an All-Star, more of a defensive role player and he had 20 rebounds before scoring his first point. He ended up with all seven of his points in the second half.

Howard has had 10 20-rebound games in the playoffs over his up-and-down career, but this was the best of the bunch and keyed a dramatic Houston win. “He was a beast,” teammate James Harden said of Howard’s historic night in a 130-128 victory that gave Houston a 3-0 first-round series lead. It was the most rebounds in a playoff game by a Rocket since Hakeem Olajuwon also had 26 against the Mavs on April 30, 1988.