2022 NFL Draft Review: The Good, the Bad and the Ugly | The Analyst 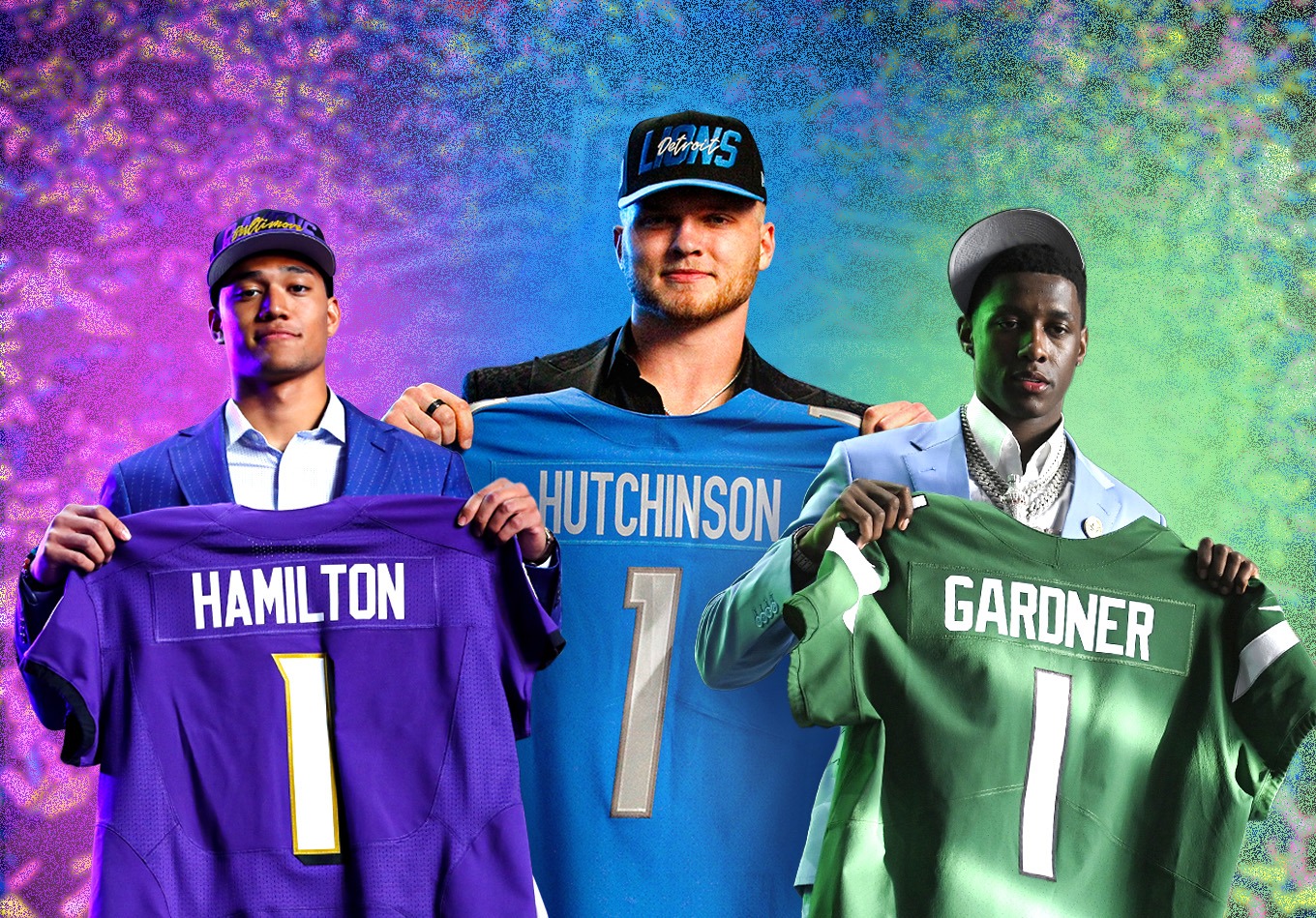 The 2022 NFL Draft is in the books and this latest crop of rookies will soon get its first taste of life in the league.

With the NFL clearly having a very low opinion of the quarterback class, to the extent that only one was drafted in the first two rounds, it is debatable whether this draft will come to be viewed as influential on the league in the coming years.

But even hitting on one or two members of a draft class can have a transformational impact on the fortunes of a franchise, while an inability to unearth and develop gems can count against coaches and general managers when the franchise hierarchy comes to review the end of a disappointing season.

Evaluating a rookie class in the immediate aftermath of a draft is extremely difficult, but with the help of our advanced data, we can reveal the teams that put themselves in position to improve with a strong class and those who should have cause for concern after their picks in Las Vegas.

Top of the Class

The Ravens did what they always do. They stuck to their board and refused to panic when teams jumped ahead of them for players who may have been on their radar.

When the Philadelphia Eagles traded up ahead of Baltimore to get Georgia defensive tackle Jordan Davis (a seemingly excellent fit for the Ravens defense), general manager Eric DeCosta simply took the best player on the board in Notre Dame safety Kyle Hamilton.

Hamilton was seen as the top player in the draft by some and will join an already extremely talented Ravens safety group that features Chuck Clark and recent free agent signing Marcus Williams. The former Notre Dame star can offer the Ravens significant defensive flexibility with his ability to excel against the pass and the run from the deep middle, the box and the slot.

Hamilton can also become an immediate playmaker in the secondary through his awareness and athleticism that belies his disappointing 40-yard dash time. Hamilton’s eight interceptions between 2019-21 were the fifth most among FBS safeties during that period.

After trading wide receiver Marquise Brown for the Arizona Cardinals’ 23rd overall pick and then trading down with the Buffalo Bills, the Ravens were still able to acquire Tyler Linderbaum – the top center in the draft. Coming from a zone-blocking scheme, Linderbaum is not a perfect fit for Baltimore but his stoutness in pass protection should greatly help an offensive line that was 17th in pass protection win rate last year.

The Ravens could then afford to take a chance on Michigan edge rusher David Ojabo after he tore his Achilles. Ojabo, whose 7.6% adjusted sack rate led the 2022 draft class last season, reunites with college defensive coordinator Mike Macdonald, who also gets to work with a defensive tackle in Travis Jones (19 tackles for loss in three seasons).

Tight ends Charlie Kolar (756) and Isaiah Likely (912) were in the top five among FBS tight ends for receiving yards last season, while the latter was second with 12 touchdowns.

Similar to the Ravens, the Lions didn’t overthink after the Jacksonville Jaguars took Travon Walker first overall. They stuck to their board and kept Aidan Hutchinson in Michigan.

The Lions, who ranked 27th in pass rush win rate last season, hope he can transform their front seven after finishing with the second-best pressure rate (30.8%) in the 2022 edge class. He’s also an impact player against the run, registering 17 tackles for loss in 2021 – two more than second-round pick Josh Paschal, who brings inside-out versatility up front.

Trading up from 32 to 12 for Jameson Williams was extremely aggressive, but it’s a move that will pay dividends if he can replicate his sole season at Alabama. He registered a burn – a play in which he was targeted and won his matchup with a defender – on 74.6% of targets, leading the receiving class in that metric, and in burn yards per route (4.91) and burn yards per target (19.34).

With D.J. Chark already on the roster on a one-year deal, the Lions won’t necessarily need Williams to be ready to return from his torn ACL immediately in 2022. Williams is a player drafted with a view towards becoming their long-term deep threat for whoever they eventually pick as their quarterback of the future.

Safety Kerby Joseph will be tasked with improving an often dismal secondary after recording five interceptions in 2021 for Illinois. Only two FBS defensive backs had more. The Lions got better at every level of a bad defense in this draft and will be more explosive on offense when Williams is healthy again.

Expectations are likely to be sky high for the Jets in the Big Apple after general manager Joe Douglas orchestrated a draft for which they have received deserved widespread plaudits.

New York boosted a much-maligned secondary by selecting cornerback Ahmad “Sauce” Gardner fourth overall. Gardner gave up just one burn for a touchdown in three college seasons and should pair nicely with Bryce Hall, who had the lowest combined open percentage (14.61) allowed across man and zone coverage of all corners in the NFL with at least 100 coverage matchups in 2021.

A trade for Deebo Samuel did not materialize so the Jets settled for a receiver in Garrett Wilson who trailed only Williams and Alec Pierce (72.9%) with a burn rate of 71.6% with the 10th overall pick. They capped a stellar first round with edge Jermaine Johnson, who lasted until pick 26 despite posting 17 adjusted sacks in 2021 – just one fewer than Hutchinson.

Second-round running back Breece Hall had the most scrimmage touchdowns (23) in the Power 5 last year, while fourth-round tight end Jeremy Ruckert averaged 11.9 yards per reception in his final season with Ohio State.

With more weapons around him and supported by what should be an improved defense, the pressure is firmly on last year’s second overall pick Zach Wilson to deliver at quarterback.

Betting on traits is something a lot of general managers do at some point in the NFL Draft, just not typically with the first overall pick.

Trent Baalke did so by taking a phenomenal athlete in Walker, who had just 9.5 sacks in college and a 2021 pressure rate of only 12.0%. Maybe Walker can harness his physical gifts on a more consistent basis in the pros, but given the Jaguars’ track record, it’s tough to envision the gamble paying off and it’s tough to look past that decision when evaluating their draft.

Having already given a lucrative contract to off-ball linebacker Foyesade Oluokun in free agency, the Jags then traded up to take another in Utah’s Devin Lloyd at 27th overall. Lloyd is an excellent prospect and had an FBS-high four interceptions among linebackers last season, but the allocation of resources to a non-premium position that they addressed again with the pick of Chad Muma in the third round is difficult to understand.

The Jags might be better in 2022, but this draft doesn’t leave much reason for excitement about a team that acquired one of the most exciting quarterbacks to come out of college in the 21st century in Trevor Lawrence last year.

The Cardinals’ big move was to reunite Kyler Murray with Brown, his former college teammate. Maybe their rapport from their time at Oklahoma quickly returns, but trading the 23rd pick for a receiver who was the 25th pick in 2019 and has a single 1,000-yard season in three years is not good business.

On the surface, getting John Mackey Award winner (top tight end) Trey McBride with the 55th pick is good value. However, the Cardinals already have Zach Ertz and Maxx Williams and very rarely play two-tight end sets under head coach Kilff Kingsbury. Unless Kingsbury is planning to change that in 2022, McBride’s pick makes little sense for the immediate future.

The selections of Cameron Thomas, who had 17 adjusted sacks last year, and fellow edge rusher Myjai Sanders, who had a 20.4% pressure rate in 2021, should help the defensive line in the wake of Chandler Jones’ departure.

However, by using a first-round pick in a trade for a receiver and waiting until Day 2 to address edge rusher, the Cardinals attacked their needs in the wrong order.

There’s nothing wrong with building on a strength. The Bears added cornerback Kyler Gordon and safety Jaquan Brisker to a secondary that was already arguably the class of a weak roster.

But this is more about what the Bears didn’t do. Chicago failed to get Justin Fields anything resembling significant help to improve an offense that was 27th in yards per play (4.86) last year. Third-round receiver Velus Jones Jr. will be 25 by the time the season starts and was known more for his return ability than his receiving prior to finishing with seven touchdowns in 2021.

The Bears also did not address a pass rush that lost Khalil Mack this offseason until the fifth round with edge rusher Dominique Robinson.

Let’s just say it’s increasingly difficult to see how Fields is set up for success in his sophomore season in the pros.