Deebo Samuel and the Evolution of the Wide Back | The Analyst 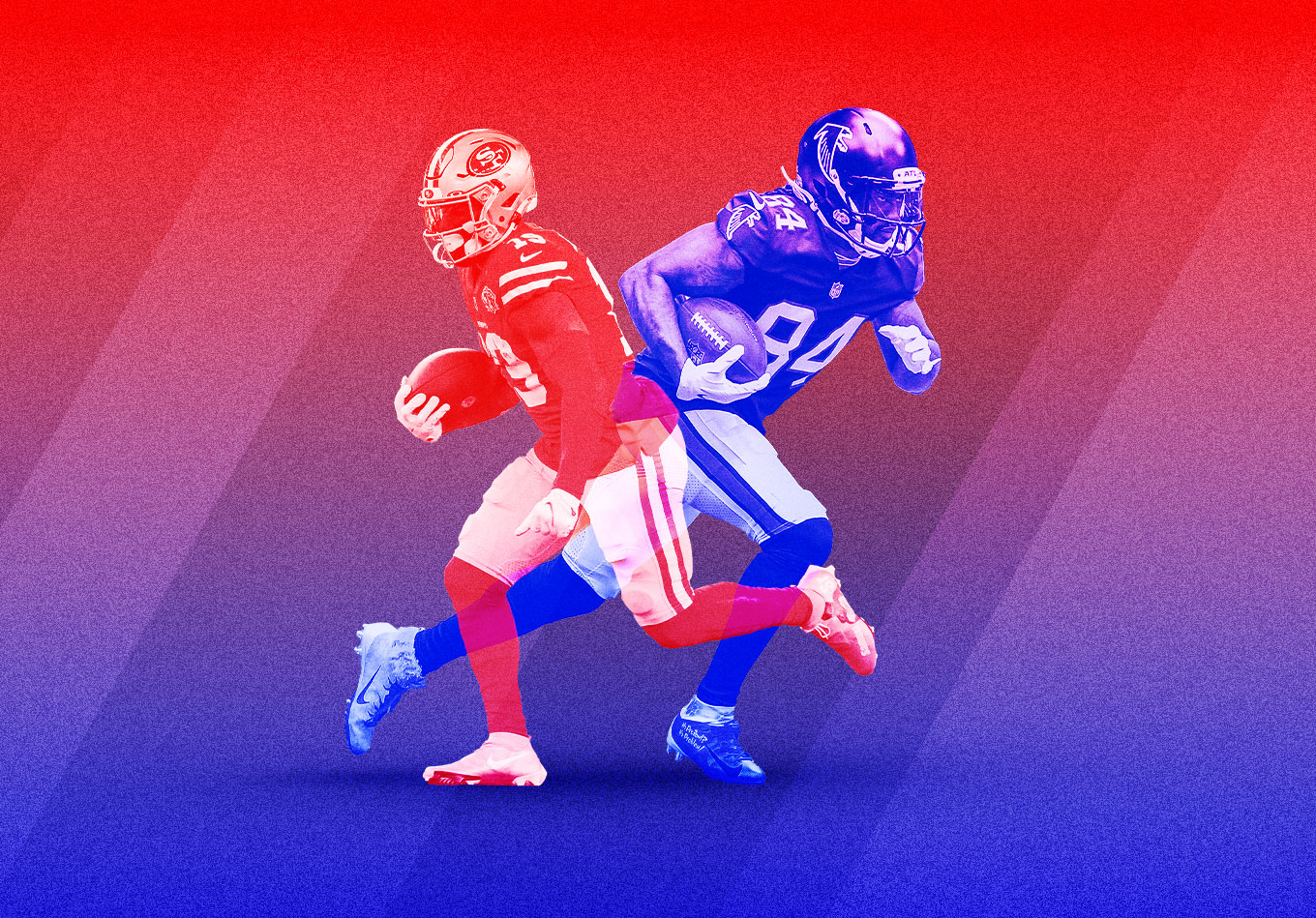 It was fitting that one of the most significant plays of the wild-card round of the playoffs was made by Deebo Samuel.

Few non-quarterbacks have played such a defining role in the 2021 NFL season as Samuel, who has blossomed into a true positionless player in the San Francisco 49ers’ dynamic and frequently devastating offense.

Samuel followed his blocks on a run to the outside, spotted a cutback lane and zig-zagged his way through the Dallas Cowboys’ defense to put the Niners 23-7 up and strike what ultimately proved the decisive blow in their 23-17 upset win at AT&T Stadium.

He became the first 49ers wide receiver to score a rushing touchdown in the postseason, with his emergence as a receiver who can dominate playing as a wideout and lined up as a running back among the most fascinating developments of an engrossing campaign.

Receivers lining up in the backfield is not a new concept, but in the endless search for mismatches, offensive coordinators are sending their wideouts behind the quarterback with increasing frequency.

In 2021, nobody has had as much success as the 49ers have enjoyed when using Samuel as a pivotal part of their rushing attack. In a copycat league, teams across the NFL will surely allocate resources in free agency and the draft to finding receivers with the physical skill set to replicate Samuel’s incredible impact.

Asked what position he plays prior to the win over Dallas, Samuel replied: “Wide back.” Here are some of the numbers behind the evolution of the ‘wide back’ and whether more players could find themselves deployed in that role because of Deebo’s stunning season.

Samuel may now be the poster boy for the concept of a wide receiver also taking significant snaps at running back, and he was used in such a fashion during San Francisco’s run to the Super Bowl in 2019. However, as he spent most of the 2020 season on the sideline through injury, a couple of other versatile wideouts profited from their coaching staff’s intelligent usage of their flexible skill sets.

In 2020, five receivers played 10 or more snaps in the backfield where they lined up in a position to receive a downhill carry. Leading the way in that regard was Cordarrelle Patterson, who took 144 running back snaps as the Chicago Bears tried to make the most of physical gifts that led him to be selected in the first round by the Minnesota Vikings back in 2013.

Patterson carried the ball 61 times in such instances for an average of 3.69 yards per carry, while he ran 35 routes and was targeted six times, registering a burn – which is when a receiver wins his matchup with a defender on a play where they are targeted – on four targets for an average of 9.5 burn yards per target.

Curtis Samuel took 64 running back snaps and received 33 carries in his final year with the Carolina Panthers and was decidedly more efficient than Patterson. He averaged 4.70 yards per rush and 2.76 yards after contact per attempt. For context, the NFL leader for yards after contact per attempt among running backs in 2020 was J.K. Dobbins was 2.68.

Both Patterson and Curtis Samuel landed with new teams in 2021 and though injuries decimated the latter’s first year with the Washington Football Team, the Atlanta Falcons designated Patterson as a full-time running back.

The move was a success as Patterson scored 11 total touchdowns, averaging 4.00 yards per carry and 3.04 yards on carries where there was a run disruption by a defender (the league average was 2.87 yards). Among running backs with at least 20 targets, Patterson was third with a big play rate of 22.6%, behind only Demetric Felton and James Conner.

Given his influence for the Falcons running and catching the ball, there’s an argument Patterson was still a ‘wide back’, just with a running back designation. And, even with him making the permanent switch, the number of receivers seeing substantial time in the backfield increased in 2021.

Eleven receivers played 10 or more snaps in the backfield in a position to receive a downhill carry this season, more than double the amount in the 2020 campaign.

Ty Montgomery led the way with 76 such snaps for the New Orleans Saints but did not produce efficiently, averaging just 2.93 yards per carry and recording a burn on six of his 15 targets.

Arizona Cardinals rookie Rondale Moore was more effective, racking up 5.82 yards per carry on 11 rush attempts, while NFL Offensive Player of the Year frontrunner Cooper Kupp took 22 snaps as a running back but ran routes on 17 of them as the Los Angeles Rams looked to take advantage of potential mismatches in space against linebackers.

But no receiver had anything close to the same impact as Samuel did when deployed in the backfield in the regular season. He lined up as a running back in position for a downhill carry 74 times and ran the ball on 53 of those snaps. The numbers make for astonishing reading.

With 365 of his 1,770 scrimmage yards and eight of his 14 total touchdowns coming on the ground, Samuel averaged 6.58 yards per rush. He recorded 4.11 yards before contact per attempt, 2.67 yards after contact and averaged 4.77 yards per attempt on carries where there was a run disruption by a defender.

For comparison, Rashaad Penny led all qualifying players with 6.29 yards per carry, with the Seattle Seahawks running back and Dontrell Hilliard of the Tennessee Titans the only players with over 50 carries at their position to average over 4.00 yards before contact per rush.

Of running backs to meet that same attempt threshold, Kareem Hunt (2.84) was the sole player to average more yards after contact per attempt than Deebo. No tailback could match Samuel’s efforts on carries where there was a run disruption.

Sample size must be taken into account. The NFL’s rushing champion Jonathan Taylor carried the ball 332 times in 2021, a substantially heavier workload that does not lend itself to the same efficiency.

Yet the production cannot be ignored. Samuel is an elite option for the Niners on the ground and, as was the case after the 2019 season when he set the record for rushing yards by a wide receiver in a Super Bowl, this coming offseason will likely be dominated by teams searching for their Deebo.

Several teams may already have their candidate to play the Deebo role in the building.

Laviska Shenault (16 running back carries in 2021) remains a painfully underused weapon on the ground by the Jacksonville Jaguars. Isaiah McKenzie averaged 12.3 yards per touch in the Buffalo Bills’ wild-card win over the New England Patriots operating in a strikingly similar fashion to Samuel. The Cardinals would also surely benefit from making greater use of Moore’s speed and elusiveness out of the backfield to take the pressure off a quarterback in Kyler Murray who looked overmatched in their playoff loss to the Rams.

But those looking to identify their own Deebo cannot expect to simply plug a quick receiver into the backfield and get the same results.

Samuel is something of an anomaly at the receiver position in terms of his build and style of play. At 6-feet and 215 pounds, he’s a stocky wideout whose weight is something he and the Niners consistently monitor, but it’s his heft that helps give him the advantage when he aggressively attacks contact and bounces off defenders for extra yardage.

And not every play-caller can take advantage of such a physical skill set to the degree that 49ers head coach Kyle Shanahan does.

The 49ers boast an offensive line that is adept at getting to the edge and to the second level of defenses to spring Samuel for huge gains on runs to the outside. But Shanahan’s ability to bamboozle defenses with how he uses Samuel is perhaps best encapsulated by the implementation of inside runs with the wide receiver in the gameplan.

When opponents key in on runs to get Samuel to the edge, Shanahan can respond with toss counter plays up the middle and be confident they will succeed. Samuel gained 19 yards on three runs up the middle in the win over Dallas.

There is no production line of receivers who thrive lined up out wide, in the slot and on runs to the outside and up the middle from the backfield. It takes a rare blend of a player with Samuel’s attributes and a coach with Shanahan’s play-calling acumen for a receiver to be this impactful in so many areas.

Finding a ‘wide back’ capable of replicating Samuel’s influence will be a sizeable task for any team. However, between the increase in receivers playing in the backfield this season and the All-Pro campaign he has enjoyed, opposing franchises look almost certain to try to rise to the challenge.