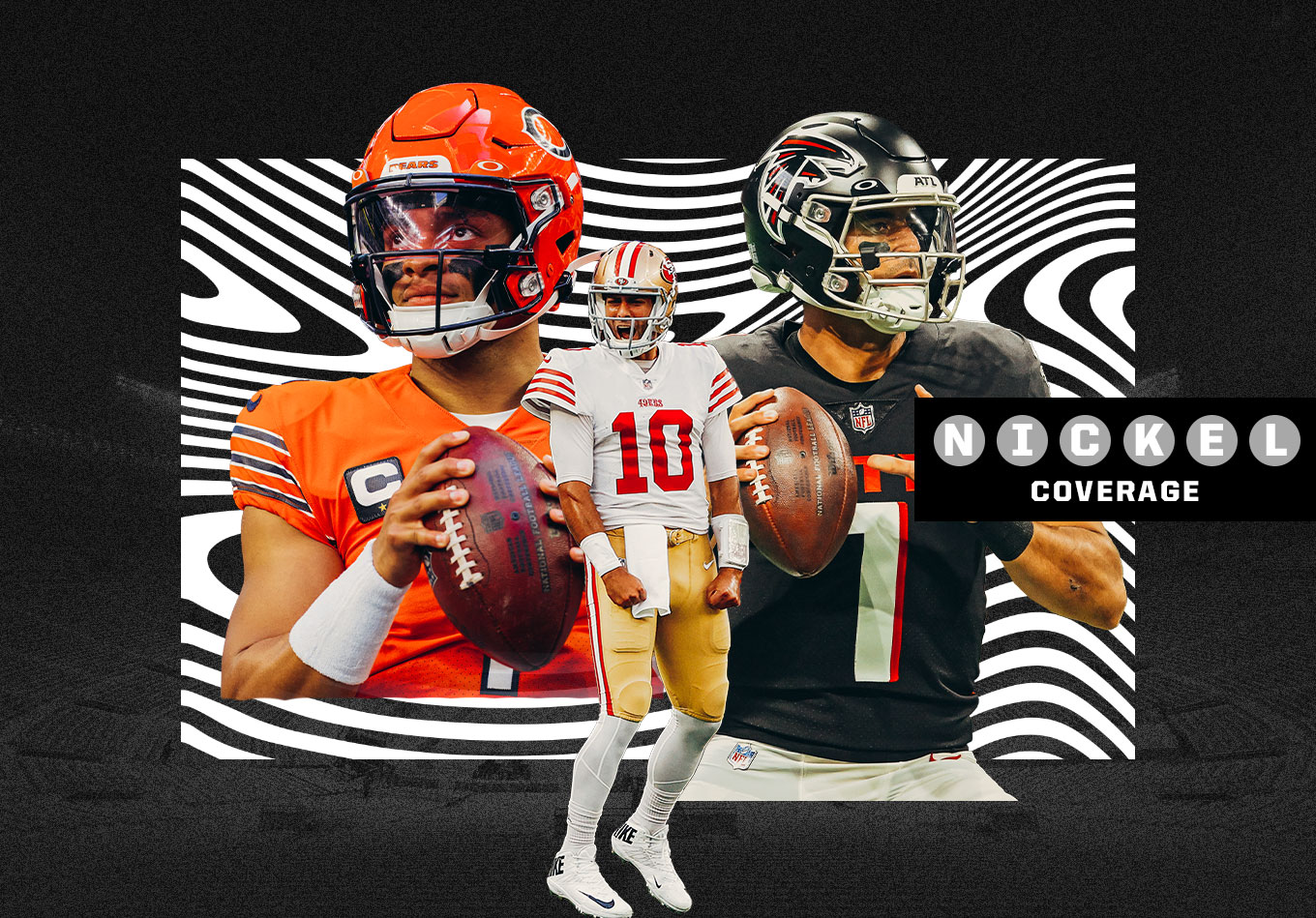 Eight weeks into the 2022 NFL season, it’s fair to say that it has been a year of surprises.

This is a campaign in which to expect the unexpected and, as such, three of the top quarterback displays from Week 8 heading into Monday Night Football have fallen entirely within that theme.

While one star still shaking the rust off following an injury layoff delivered the kind of game most have come to anticipate from him, the degree of accuracy displayed by the trio of signal-callers surrounding him at the top of our well-thrown percentage leaders by the end of Sunday’s action was eyebrow-raising to say the least.

And one quarterback who tried and failed to find a new team in the offseason rose above the rest.

There will never be a game that definitively decides the endless Jimmy Garoppolo debate in the Bay Area, where the San Francisco 49ers quarterback who was meant to be elsewhere this season remains a beloved but polarizing figure.

But nobody could argue Garoppolo was not excellent in Week 8 as the 49ers scored 24 unanswered points to sweep the Los Angeles Rams with an emphatic 31-14 win at SoFi Stadium.

So much of the attention in the immediate aftermath was rightly on Christian McCaffrey, who became the fourth player with a touchdown pass, rushing touchdown and touchdown reception in a single game since the 1970 merger in a remarkable performance just 10 days on from his trade from the Carolina Panthers.

However, Garoppolo also deserves a share of the spotlight following what was, by at least one measure, a near-perfect game from a quarterback frequently criticized for his volatility.

Garoppolo finished the game with a well-thrown percentage of 96.0, meaning one of his 25 passes, excluding throwaways, was deemed to be accurate and well-thrown.

Though Garoppolo averaged only 6.76 yards per attempt, he still completed a host of big-time throws, including a third-down touchdown shot to a leaping McCaffrey and a 56-yard bomb down the left sideline to Ross Dwelley.

The dart to Dwelley was followed by a perfectly placed ball to George Kittle in the back of the end zone on a sprint out pass that iced the game.

At 4-4 heading into the bye with a star-studded offense and a series of players still to return from injury on defense, the 49ers are ideally positioned for a surge down the stretch.

They won’t get this accuracy every game from Garoppolo, but if he maintains a level close to what he produced in Inglewood on Sunday, San Francisco will be a major threat in the NFC.

Marcus Mariota had hardly been trusted to throw the ball over the four games prior to the Atlanta Falcons’ wild win over the Carolina Panthers.

Only once over those four games had he registered more than 20 passing attempts, but Mariota was allowed to air it out on Sunday, and the Falcons should be delighted by the manner in which he did so.

The former second overall pick delivered a 92.6 well-thrown percentage on his 27 pass attempts, maintaining remarkable accuracy while pushing the ball down field with consistency in a captivating shootout.

Mariota blended accuracy and deep-ball aggression in a way most quarterbacks struggle to replicate.

And though he tossed an overtime interception that should have cost the Falcons the game, his performance may convince head coach Arthur Smith to diversify his approach and shift to a more balanced attack as the 4-4 Falcons look to make a surprise run at the NFC South title.

The case could be made that the Dallas Cowboys were still running the ‘Cooper Rush’ offense in Prescott’s first game back from a finger injury in Week 7 against the Detroit Lions.

Dallas labored somewhat in that one before pulling away and, though the Week 8 performance was not a faultless one from Prescott, it was one to breed hope the Cowboys can legitimately go deep into the NFC playoffs with him at the helm.

Prescott posted a well-thrown rate of 92.3% in the Cowboys’ 49-29 win over the Chicago Bears, with arguably his most aesthetically pleasing throw coming on his first touchdown pass as he split safeties Eddie Jackson and Jaquan Brisker on a 21-yard rope to CeeDee Lamb on third-and-9.

Third down did not prove a challenge for Prescott at any point. He completed five of his six third-down throws for 85 yards and a touchdown, with a Bears defense ill-equipped to stop the Cowboys consistently frustrated when they got into positions to get off the field.

An interception by Jackson was the sole blemish on the day for Prescott, who also had a rushing touchdown, and the room for improvement he clearly still has after a showing of this caliber should be of great excitement to the 6-2 Cowboys as they attack the second half of the season.

The Bears did not produce the all-round performance to keep pace with the Cowboys, but it was another effort by last year’s first-round pick Justin Fields to boost optimism around his prospects of blossoming into one of the league’s better quarterbacks.

After finally building a game plan around his athleticism in the Monday Night Football win over the New England Patriots, the Bears once again leaned on Fields’ mobility. He threw seven times on the move, with Chicago also implementing play-action and the quarterback bootleg into the attack.

The results were impressive as Fields finished the game with a well-thrown rate of 90.9% while averaging 9.5 air yards per attempt. On top of that, he did not throw a single pickable pass, though he did have one pick called back because of a roughing the passer penalty.

Fields was perfect on play-action, with all six of his passes from those concepts well thrown, and he would have had significantly more than 151 passing yards to his name had rookie receiver Velus Jones not dropped an outstandingly placed moonball down the right sideline from the Chicago 47-yard line in the second quarter.

But Fields still accounted for three touchdowns, throwing two and rushing for another in a 60-yard display on the ground. Though the Bears’ decision to trade defensive stars Robert Quinn and Roquan Smith will play a role in limiting their wins in 2022, the Bears will be increasingly convinced Fields is the right man to rebuild the team around if he continues to make progress.