Run CMC: Can McCaffrey Help the 49ers Go on Another Deep Run? | The Analyst 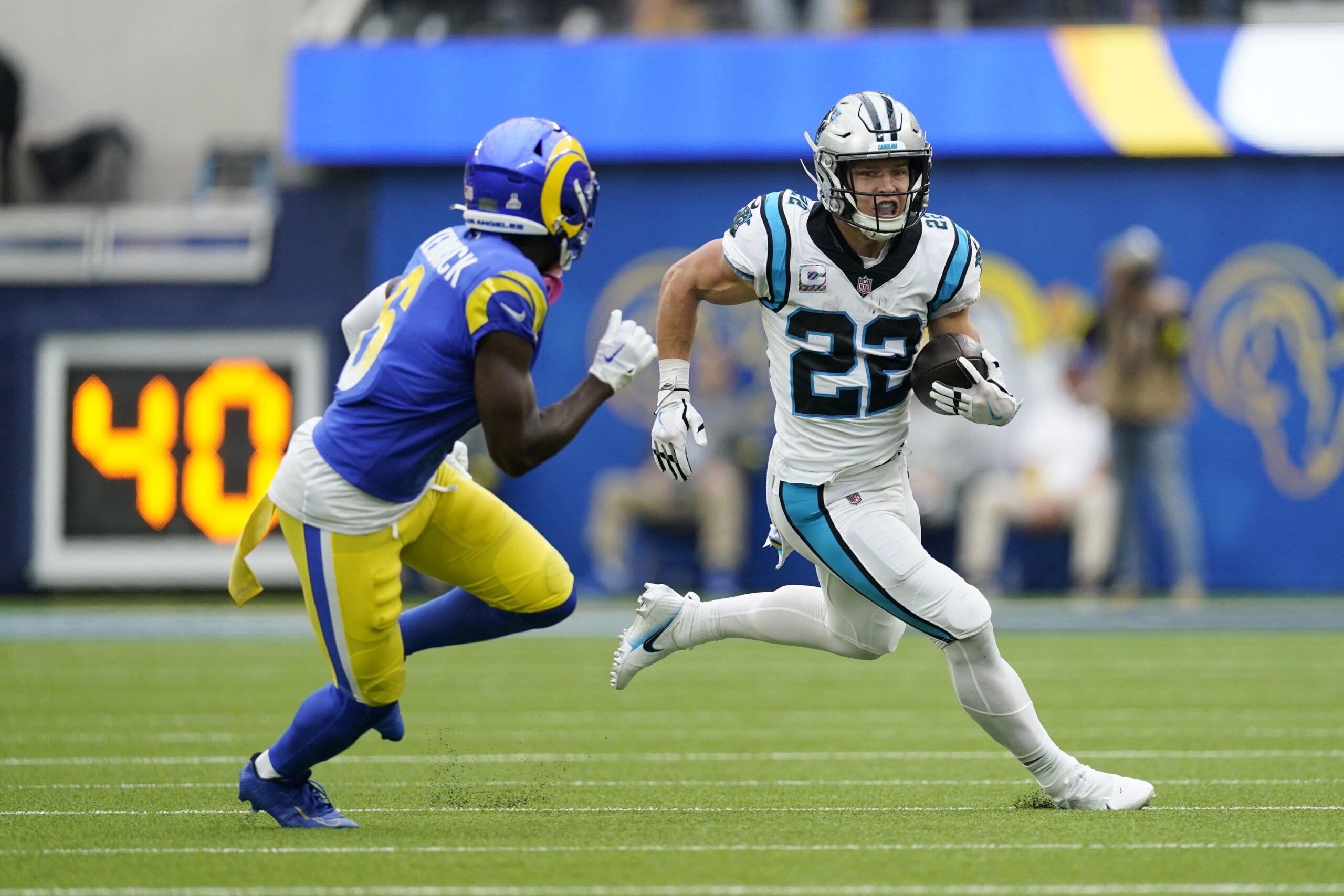 Run CMC: Can McCaffrey Help the 49ers Go on Another Deep Run?

The San Francisco 49ers’ running game hasn’t quite performed at the standard they would have hoped so far in 2022, but they made a blockbuster move to address that on Thursday by trading for two-time All-Pro running back Christian McCaffrey

San Francisco traded a second, third and fourth-round pick in the 2023 draft as well as a fifth-rounder in 2024 to acquire McCaffrey from the Carolina Panthers.

At his best, McCaffrey can be one of the most devastating playmakers in the NFL. Back in 2019, he became only the third player after former 49ers great Roger Craig and Marshall Faulk to rack up 1,000 rushing yards and 1,000 receiving yards in the same season.

In the two subsequent seasons, however, McCaffrey played only 10 games because of injury and will carry a cap hit of at least $12 million in each of the next three seasons.

While he has played every game so far in 2022, giving up that level of draft capital and committing to pay that contract — though it could be restructured in the offseason — for a player with McCaffrey’s durability problems represents a significant risk.

The 49ers’ average of 4.43 yards per carry is 14th in the NFL, though they rank 10th in offensive EVE — which compares projected yards to the actual yards gained or prevented in specific situations — on run plays.

San Francisco’s run game has not produced at an elite level so far in 2022, but it is one of the more efficient in the NFL.

The level of compensation paid to land McCaffrey suggests the 49ers believe he can lift the rushing attack to the very top of the league, but can he do enough to justify the outlay San Francisco spent on him?

Still Potent on the Ground

Despite playing behind an offensive line in Carolina that ranks 30th in run block win rate, McCaffrey has produced a compelling argument through the first six weeks that he is still one of the most dangerous running backs in the NFL.

While his 393 rushing yards are only good enough for 14th in the NFL, his advanced numbers illustrate his value running the ball.

His yards before contact average of 2.29 yards is below the league average of 2.5, with that figure a reflection of the disappointing blocking of the offensive line in Carolina.

However, McCaffrey did an impressive job of overcoming the Panthers’ futility in the trenches, putting up 2.44 yards after contact per attempt — above the average of 2.05.

Additionally, he’s also averaging 3.36 yards per carry on runs where there is a disruption by a defender, again above the league-wide mark of 3.05 and just below that of Saquon Barkley (3.37), who is second in the NFL in rushing yards with 616.

Though the Niners, who possess a young interior offensive line, are just 16th in run block win rate, that still represents a marked improvement on Carolina’s performance and McCaffrey should benefit from blocking that will enable him to rack up more yardage before contact and more consistently get to the second level of the defense.

Yet his rushing production is just part of the appeal with McCaffrey, with the potential added dimension offered by his significant receiving upside surely a huge factor in the 49ers’ decision to part with such a substantial package of draft picks.

Despite battling injuries for each of the last two seasons, McCaffrey still has an extremely strong claim for being considered the premier receiving running back in the NFL.

Since 2017, when he was drafted eighth overall by the Panthers, only the New Orleans Saints’ Alvin Kamara (3,454) has racked up more receiving yards among running backs than McCaffrey (3,292).

However, Kamara has played 78 games to McCaffrey’s 64 in that time and the per game numbers skew heavily in the latter’s favor. McCaffrey has averaged 51.4 receiving yards per game across his career — the most among running backs since 2017 — compared to 44.3 for Kamara in second.

This season, though, McCaffrey’s production through the air has not been efficient even though the Panthers have targeted him 43 times — only Ekeler (48) has more among backs.

He has produced a burn, which is when a receiver wins his matchup on a defender on a play where he is targeted, on 17 of his 43 targets. His burn rate of 39.6% is below the league average at his position of 47.6, and he has delivered a big play on 11.0% of targets (the average this season is 12.7).

Yet his final weeks in Carolina were ones with a team clearly ill-equipped to maximize his talents.

San Francisco head coach Kyle Shanahan should have no such problems, with McCaffrey likely to benefit from his new play-caller’s ingenuity and from playing alongside another of the league’s most versatile offensive weapons.

Doubling up on Wide Backs

McCaffrey may be the NFL’s best pass-catching running back, and he’s joining the league’s top ball-carrying wide receiver on the San Francisco offense.

Last season, Deebo Samuel set the NFL record for rushing touchdowns by a wide receiver in a single season with eight of his 14 total touchdowns coming on the ground.

When lined up as a running back for a downhill carry in 2021, Samuel averaged 6.58 yards per rush. He recorded 4.11 yards before contact per attempt, 2.67 yards after contact and averaged 4.77 yards per attempt on carries where there was a run disruption by a defender. His remarkable proficiency in the self-termed ‘wide back’ role fueled San Francisco’s surge to the NFC championship game.

This season, Samuel has 19 carries from the running back spot and is averaging 6.53 yards per rush and 4.61 yards after contact per attempt on those runs.

McCaffrey, meanwhile, has lined up as a slot receiver for 20 snaps this season after having done so on just 11 occasions in seven games in 2021.

Expect Kyle Shanahan, a play-caller for whom disguise is a calling card, to increase that number. Samuel and McCaffrey will almost certainly interchange between the running back and wide receiver roles, while split back formations with McCaffrey and Samuel in the backfield are sure to become a staple of the attack.

With McCaffrey and Samuel both a threat to run or catch the ball in such instances, those formations promise to be a nightmare for defenses to decipher and the problems for opponents figure to intensify in 2023 when Jimmy Garoppolo gives way to the dual threat of Trey Lance at quarterback once more.

The 49ers are hoping McCaffrey will provide more explosiveness in the run game, but it is the added diversity for which they are paying such a high price.

McCaffrey’s recent injury history makes that cost seem a little more exorbitant. But while in the short term the trade may well be judged on whether this acquisition ensures the Niners again go deep into the postseason, most will forget about the price tag next season if he plays alongside Samuel and Lance in a dynamic run game that helps the 49ers stay at the sharp end of the NFC despite their quarterback’s inexperience.