NFL Predictions: What Does Our Projected Playoff Bracket Look Like Heading into Week 8? | The Analyst 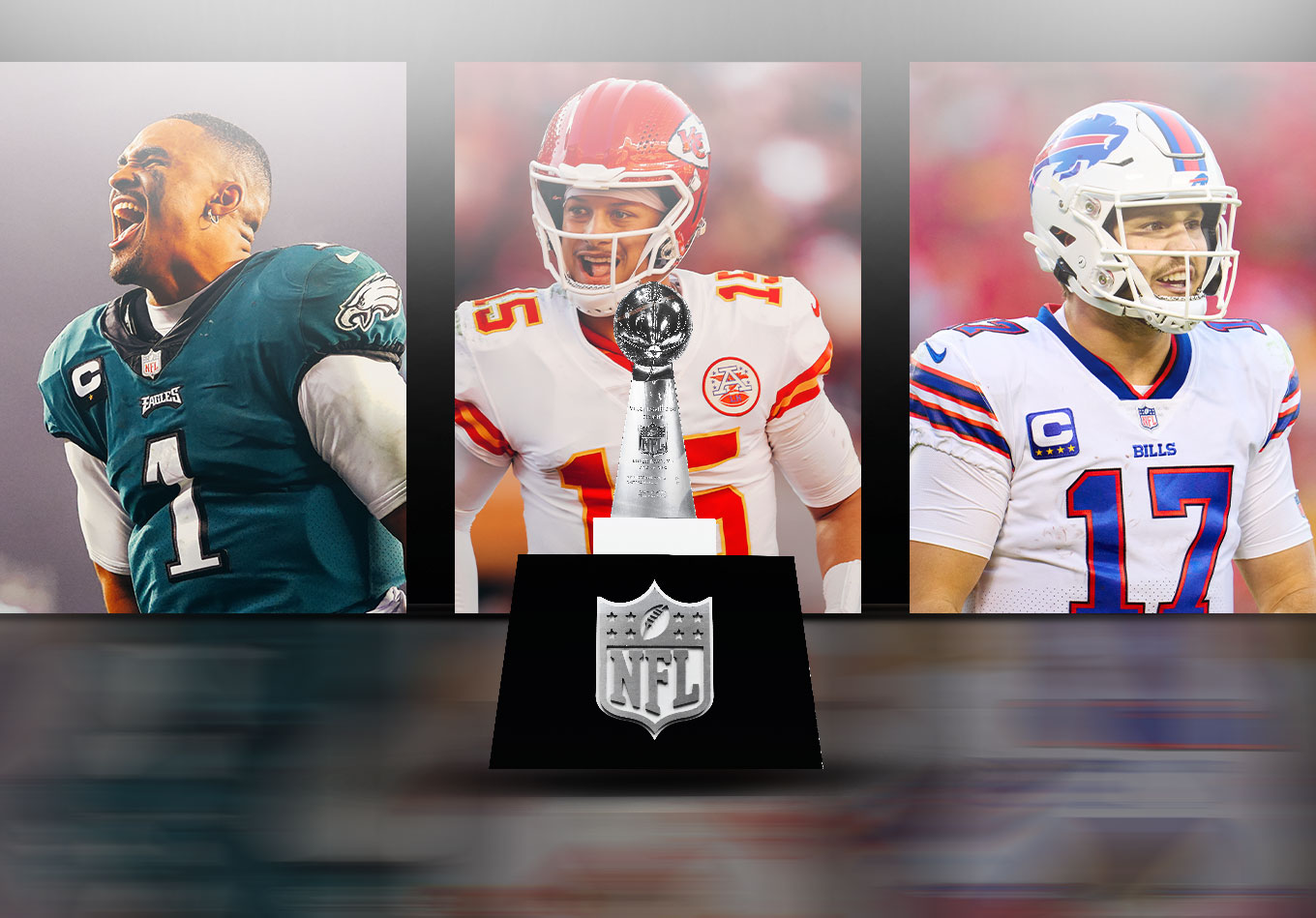 NFL Predictions: What Does Our Projected Playoff Bracket Look Like Heading into Week 8?

There is a clear top tier in the NFL.

The Buffalo Bills and Kansas City Chiefs, both AFC powerhouses, and the unbeaten Philadelphia Eagles are in a class of their own.

After that, take your best guess.

Our rest-of-season (ROS) projection is reflective of the state of the league. The 6-0 Eagles are given a 42.4% chance to reach the Super Bowl, with the Bills (33.8%) and Chiefs (30.4%) on course to lock horns in the AFC championship game. No other team has more than a 15% shot.

That trio does have company in terms of predicted average win total. The Minnesota Vikings (12.2) are projected to win more games than the Chiefs (12.0), though that is indicative of a softer schedule rather than being any sign of Minnesota superiority over Kansas City.

The projected win percentages are then aggregated to produce the forecasted standings. And right now it is offering hope to some teams that look anything but Super Bowl contenders.

Bucs Not Finished, but Green Bay Can Pack It Up

More questions have arisen about the viability of the Tampa Bay Buccaneers and Green Bay Packers as legitimate challengers after their latest hugely disappointing performances.

Green Bay suffered a third successive loss at the hands of the Washington Commanders, while the Buccaneers reached a low point of the Tom Brady era as they slumped to a 21-3 defeat to the Carolina Panthers.

Both are now 3-4, though the Buccaneers retain the lead of the underwhelming NFC South, and the projection still believes Tom Brady can inspire a turnaround.

Indeed, at 8.6%, the Bucs have the second-best odds of winning the Super Bowl among NFC teams, looking up at only the Eagles. They also have an average projected win total of 10.0 compared to 8.3 for the Packers, who would miss the playoffs if that prediction proved accurate.

Tampa Bay and Green Bay each have an average depth of target of just 5.9 yards as Brady and Aaron Rodgers continue to struggle to generate explosive offense.

But at this point, the model has distinctly more faith in the Buccaneers’ star-studded receiving corps than it does a Packers group bereft of targets for Rodgers to trust as injuries bite a group already thinned by the Davante Adams trade.

The Bengals Are Back

Many were quick to write off the defending AFC champion Bengals following an 0-2 start, but they have since won four of their last five to put themselves firmly in the mix to win the AFC North for a second successive year.

Joe Burrow was back to his best in the Week 7 win over the Atlanta Falcons and continues to be unerringly accurate, boasting a well-thrown rate of 84.4% that is 10th among all quarterbacks with at least 100 pass attempts.

His performances have lifted the Bengals’ average projected win total to 9.7 (third in the AFC behind the Bills and Chiefs), while they are also given a 12.4% shot of making the Super Bowl and a 5.2% chance of winning it.

Those may seem like relatively small odds, but nobody expected Cincinnati to go within minutes of winning the Lombardi Trophy last season.

This is a team that cannot be counted out.

Given the Seattle Seahawks surge to the top of the NFC West, you might think the projection would suddenly have them as contenders to win the division.

Despite back-to-back defeats in which their offense struggled for consistency and what many believe to be an elite defense collapsed amid injuries and the issues posed by facing the Chiefs, the San Francisco 49ers are still projected to prevail in the West.

The ROS projection predicts an average win total of 10.2 for the 49ers, meaning they would need to follow a remarkably similar path to their 2021 success down the stretch and win seven of their final 10 games. San Francisco’s 5.8% chance of winning the Super Bowl puts it fourth among NFC teams.

San Francisco meets the Los Angeles Rams for the second time this season on Sunday in a contest that will be critical to both teams’ hopes, and the projection still believes Los Angeles can make the postseason.

The Rams, even with an offensive line allowing an adjusted sack rate of 8.7% that is tied for the third worst in the NFL, are still given an average win total of 8.5. That’s good enough to sneak the defending Super Bowl champions in as the seventh seed.

What of the Seahawks?

Their predicted average win total of 7.7 suggests a close fight with the Rams, but Geno Smith and Co. would surely be disappointed with that after their 4-3 start.

If Smith maintains the form that sees him lead the NFL with a well-thrown rate of 88.4%, the projection may soon change.

We projected the Eagles to win 11.9 games and finish first in the NFC East, and that number has risen to an NFC-best 14.5 victories.

The Dallas Cowboys and surprising New York Giants are also projected to make the postseason out of the division.

After being projected to win 11.1 games during our preseason predictions, the Bills’ projected win total has soared to an AFC-best 14.5 games.

The New England Patriots and Miami Dolphins are also projected to qualify for the playoffs out of the AFC East.

In the AFC South, the Indianapolis Colts have fallen out of the top spot and the Tennessee Titans have regained control of the division.

The Titans, however, aren’t exactly projected to be a dominant division winner with just 7.9 wins.

The aforementioned Chiefs have seen their projected win total rise from 11.5 games in the preseason to 12.0 heading into Week 8.

Though this was expected to be the best division in football, Kansas City is the only team projected to make the postseason out of the AFC West.