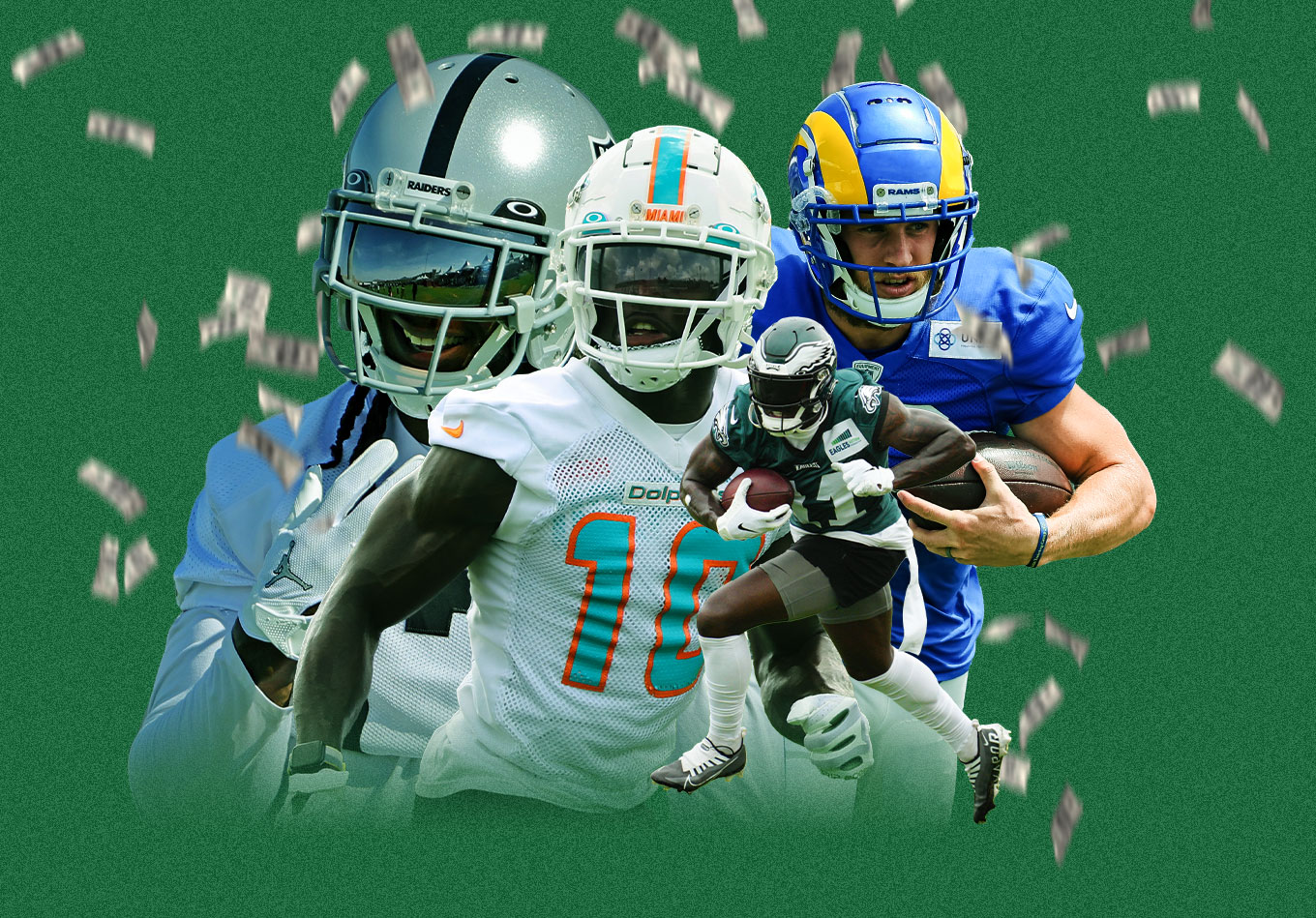 2022 has been the year of the wide receiver.

Kupp, the best receiver in the NFL all year, capped his historic season with a dominant display in the playoffs. He averaged 139 yards per game in the Rams’ final three games and scored five touchdowns, including the go-ahead score with 1:25 remaining in the Super Bowl. His exploits resulted in a Super Bowl MVP as he become only the second wide receiver to win the award since 2010.

Earlier this offseason, Kupp was given an extension, rewarding him with the most guaranteed money and the fourth largest contract by average dollars per year given to a wide receiver.

Eleven of those wideouts put pen to paper this offseason.

There are more wide receivers coming. You don’t think Justin Jefferson and CeeDee Lamb are sitting back, looking at this booming market and enjoying every second of what it might mean for their future career earnings when it becomes their turn to sign a contract extension?

The question is no longer whether wide receivers are going to be paid top dollar. Besides quarterback, they are now alongside pass rushers as the most financially compensated position. The question actually is: Should teams be paying top dollar for these elite wide receivers?

It’s a tough question to answer, simply because it’s often tough to separate quarterback play from wide receiver play. But let’s attempt to determine the factors front offices face in answering that question by looking at the roster construction of previous Super Bowl teams before looking at some more specific wide receiver metrics.

There have been 22 Super Bowls played since the turn of the century. Only three of those winning teams had an All-Pro wide receiver on the roster that year. The 2021 Rams had Kupp. The 2006 Indianapolis Colts had Marvin Harrison. The 2011 New York Giants had Victor Cruz, who made the second team roster. That’s it.

Expanding the search to all 44 teams that played in those Super Bowls, only 13 of the 44 Super Bowl-bound teams had an All-Pro wide receiver. That includes the 2007 New England Patriots, who had Randy Moss (first) and Wes Welker (second) both make the All-Pro team.

But let’s go a step further. Of the 14 total wide receivers that were an All-Pro, only three of them accounted for more than $7 million dollars against the salary cap: Hill (2020), Julio Jones (2016) and Terrell Owens (2004). Only Jones and Owens accounted for at least 10% of their team’s total cap space.

Now, because so many receivers signed their deals this offseason, teams were able to keep their salary numbers manageable for this season. For example, Hill is only costing the Miami Dolphins $6,485,000 against the cap, which comes out to 3.1% of the cap number. In fact, only one wide receiver will be counting for more than 10% of his team’s cap –Kenny Golladay of the New York Giants.

However, for the 2023 season, 14 wide receivers are currently scheduled to account for a cap number higher than $20 million dollars. With a rapidly rising salary cap, that’ll keep most of the wide receivers below that 10% cap hit. However, here’s where things get tricky.

In 2021, the top 10 wide receivers (measured by their cap number for that specific season) combined for two playoff wins (both by Hill). The only other team that won a postseason game was the Tampa Bay Buccaneers, but Chris Godwin missed the game due to injury. Amari Cooper (first), Adams (third), and DeAndre Hopkins (10th) were all on teams that lost their first playoff games. The other five players were on teams that didn’t make the playoffs.

In 2020, the top 10 wide receivers combined for seven playoff wins, but four of those came from Kansas City’s Hill and Sammy Watkins. Five of those wideouts played on teams that didn’t make the playoffs.

In 2019, the top 10 wide receivers combined for four playoff wins, but three of those came from Watkins during the Chiefs’ run to the Super Bowl. Hopkins accounted for the only other postseason win. The other eight played on teams that didn’t make the playoffs.

In 2018, the top 10 wide receivers combined for one playoff win – T.Y. Hilton. Three wide receivers lost in the first round and six more didn’t make the playoffs.

Finally, in 2017, the top 10 wide receivers again only accounted for one playoff win as Jones and the Atlanta Falcons were able to win a game as the No. 6 seed. Two receivers lost in the first round and seven didn’t make the playoffs.

The numbers are jarring, and they don’t get any better the further back you look. Not a single top-10 wide receiver won a postseason game in 2014. And in 2009 and 2010, not a single top-five wideout even made the playoffs.

It’s more than fair to say that historically, paying wide receivers has not led to much team success.

Which leads us to a critical caveat in this discussion. We aren’t arguing against having great players – great players help you win. Every team would have been better with Kupp last season. But the ultimate cheat code in the NFL isn’t having a Cooper Kupp, it’s having Kupp-like players on either on a rookie deal or an extremely team-friendly one.

Kupp, Chase and Samuel combined to account for just over $10.3 million against the cap during the 2021 season. That total is less than what Will Fuller IV cost the Dolphins. Those players’ manageable salaries allowed their respective teams to do things like trade for Von Miller and sign Odell Beckham Jr midseason, or sign Trey Hendrickson and four (!) secondary starters before the season began.

Last season, the Rams lapped the field in pass rushing, led by the incomparable Aaron Donald. The Rams had an unbelievable 3.95 standard deviation above league average in our one-on-one matchup data, significantly better than the NFL’s second-best unit.

Three of those top-five teams were amongst the final four. And all four conference championship teams were led by defensive lineman making top-10 money at their position: Donald (third at DT), D.J Reader (fourth at DT), Arik Armstead (eighth at DT) and Frank Clark (first at EDGE).

It was similar story in 2020 when Chris Jones (seventh at DT), Clark (fourth at EDGE), Za’Darius Smith (fifth at EDGE) and Shaquil Barrett (ninth at EDGE) all at least reached the conference championship.

While the history of elite pass rushers is much more littered with successful teams, there is a reason wide receivers have seen a massive rise in financial compensation over the past couple seasons. The last few years have seen the most impactful pass-catching groups have the highest possible team success.

In fact, 12 of the 14 playoff teams had pass-catching groups that were above league average. Not so coincidentally, 12 of our top 14 teams in pass offense EVE (efficiency versus expected) made the playoffs.

Basically, in order to make the playoffs last season, teams needed to have an efficient passing offense. And having an elite group of pass catchers was certainly helpful in that pursuit.

Take a look at those top six teams again. Samuel, Kupp and Adams were the first team All Pro receivers. Chase and Jefferson were the second team receivers.

Back in 2020, the Super Bowl was contested between teams that had pass-catching groups ranked first (Chiefs) and third (Buccaneers). Had those teams lost in their respective conference championship games, well, the Green Bay Packers had the second-best group of pass catchers, and the Buffalo Bills were fourth.

And that is why the decision to pay wide receivers top dollar is such an interesting question. Both the Chiefs and Packers decided against doing so, letting their leading men – Hill and Adams – go to other teams in favor of stocking other positions. But the Rams and Bills both decided that their leading men are critical to their team goals.

It’s a massive team-building question, one that is certainly going to help decide which teams have the most successful season.

But if there’s one thing for certain, it’s that teams like the Minnesota Vikings, Dallas Cowboys and others with elite, cheap wide receivers need to take advantage before those wideouts demand top-of-the-market money.