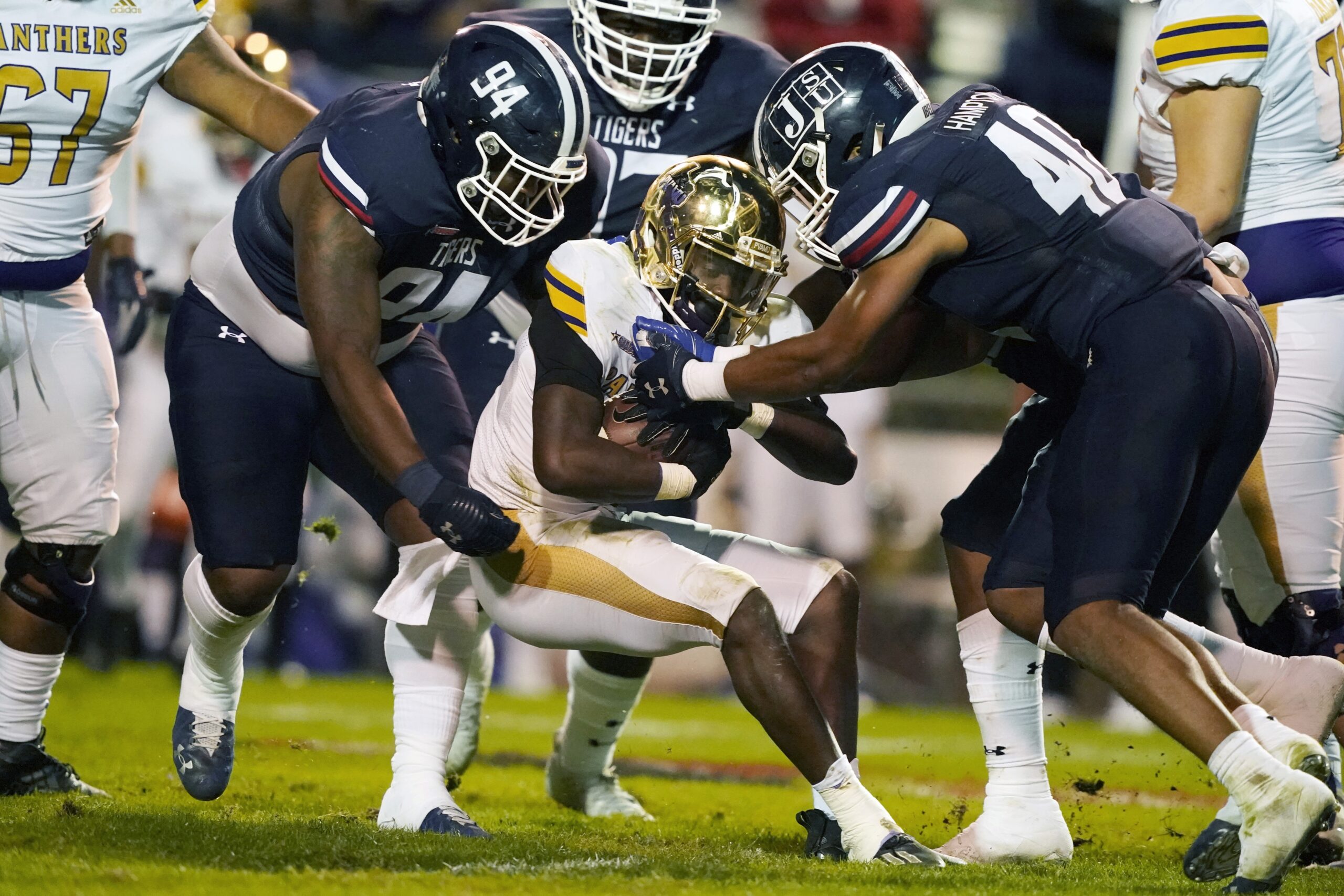 “There’s going to be a signature game each and every week,” he said, “for one team to stay alive.”

Yes, it’s survive and advance in the SWAC, where there isn’t much margin for error for any team, including defending champ Jackson State.

Eddie Robinson Award-winning coach Deion Sanders led the Tigers to their first conference title since 2007, but Florida A&M nipped at their heals in the East Division all season long before the Rattlers claimed the SWAC’s first FCS playoff bid since 1997. (Watch the FCS National Awards)

The West Division is even more bunched with contenders. So much so that Prairie View A&M, last year’s top team was picked third in the SWAC’s preseason poll behind Southern and Alcorn State.

The two division winners will square off in the SWAC championship game on Dec. 3, with the winner advancing to the Celebration Bowl on Dec. 17 in Atlanta. Last year, Jackson State (11-2) was stunned by Mid-Eastern Athletic Conference champ South Carolina State 31-10 in the annual bowl game.

Following is a quick look at the upcoming SWAC season. The four head coaching changes are the most for any FCS conference.

1. Jackson State (2021: 11-2, 8-0 SWAC; preseason No. 15 ranking) – Much of the attention rightfully went to Deion Sanders and his son Shedeur, the Jerry Rice Award-winning quarterback, but the Tigers’ defense was just as important to the team’s success last season, ranking second in the FCS in fewest yards allowed per game (257.4) and second in points allowed per game (14.8). The Tigers have loaded up on transfers again with a unit that returns linebacker Aubrey Miller Jr. (team-high 109 tackles).

3. Alabama A&M (7-3, 5-3) – Abdul-Fatai Ibrahim is the only active FCS player with two seasons of at 1,000+ receiving yards, but he and the Bulldogs are going to miss quarterback Aqeel Glass, the two-time SWAC offensive player of the year. Standing only 5-foot-6, running back Gary Quarles led the SWAC in rushing yards per game (95.5) and rushing touchdowns (10).

4. Alabama State (5-6, 3-5) – New coach Eddie Robinson Jr. (no relation to the legendary Grambling State coach) doesn’t lack for spotlight games with the MEAC-SWAC Challenge (Howard), a visit to UCLA as the Bruins’ first-ever FCS and HBCU opponent, and the Magic City Classic with rival Alabama A&M. The team’s strongest unit is the secondary with safety Irshaad Davis (team-high 67 tackles) and cornerbacks Nayton Culpepper and Keenan Isaac.

5. Bethune-Cookman (2-9, 2-6) – The Wildcats’ first season in the SWAC was stunning because they slumped to their worst record since finishing 2-9 in 1996. Kemari Averett led FCS tight ends in receiving yards (876) and TD catches (10) on 51 receptions, while linebacker Omari Hill-Robinson’s 101 tackles were the second-most in the conference.

6. Mississippi Valley State (4-7, 3-5) – In coach Vincent Dancy’s fourth season, the Delta Devils were competitive in all but one of their SWAC games, ending the encouraging campaign with two straight wins. Caleb Johnson is coming off 1,004 rushing yards – MVSU’s first member of the century club since Corey Holmes in 2000. Junior college transfer Jamari Jones steps in at quarterback.

1. Alcorn State (6-5, 5-3) – The Braves won four SWAC titles and reached two other championship games from 2014-19, so last year’s step backward after sitting out the pandemic-delayed 2020 season was difficult. Three of their losses occurred in games they led or were tied in after three quarters, but they enter the new season with 13 straight home games, the FCS’ longest active streak. Niko Duffey has surpassed 800 rushing yards in each of his first two seasons.

2. Southern (4-7, 3-5) – After leading Prairie View A&M to the SWAC championship game last season, coach Eric Dooley will try to do the same at Southern after making a move across the division (he’s also been an assistant at Arkansas-Pine Bluff and Grambling State). Dooley has brought Jason Dumas (43.5 tackles for loss and 19.5 sacks in career) with him to team on the defensive line with 2020 Buck Buchanan Award recipient Jordan Lewis (48.5 TFLs, 34 sacks).

3. Prairie View A&M (7-5, 6-2) – While this is Leonard “Bubba” McDowell’s first season as head coach, it’s his 11th on the coaching staff. His Panthers return eight starters on each side of the ball. Running back Ja’den Stewart, who impressed as a freshman with 657 yards and seven TDs, will take pressure of new QB Trazon Connley. Linebacker Tre’Vion Green is the team’s top returning tackler (57).

4. Grambling State (4-7, 3-5) – New coach Hue Jackson has his pick of transfer quarterbacks, including former four-star recruit Kajiya Hollawayne from UCLA. The Tigers should be led by a defense that boasts end Sundiata Anderson, linebacker Blake Thomas and defensive back Quincy Mitchell. With road games and “classics,” the Tigers won’t play on campus until their seventh game on Oct. 15.

5. Arkansas-Pine Bluff (2-9, 1-7) – Last season was a big drop-off from winning the West title in the 2020 season that was held in spring 2021. Quarterback Skyler Perry has 6,324 yards of total offense and 42 total touchdowns in his career, but he’s coming off a subpar season in which he threw more interceptions (nine) than TDs (six). Linebacker Monroe Beard III (team highs of 78 tackles and five sacks) is considered one of the harder hitters in the SWAC.

6. Texas Southern (3-8, 2-6) – As a freshman, QB Andrew Body set TSU’s single-season record by averaging 265.9 yards of total offense per game. A handful of his key weapons are gone, but tight end Jyrin Johnson is a safety valve. A porous defense continues to be an issue, with the Tigers allowing 456 yards and 36.1 points per game last season – their worst totals since 2012.

(A look back to SWAC Football Media Day)

Travis Hunter, S/WR, Jackson State – College football’s No. 1 recruit in the 2021 signing class is going to want to make his presence known on both sides of the ball. He had 19 interceptions, 263 receptions and 50 touchdowns in his Georgia scholastic career.

Shedeur Sanders, QB, Jackson State (Walter Payton Award preseason nominee) – Sanders struggled a bit in two postseason games, but his overall freshman numbers (3,231 yards and 30 TDs through the air) were outstanding. Entering his sophomore season, he was selected as the SWAC’s preseason offensive player of the year.

Florida A&M vs. Jackson State (Sept. 4 in Miami Gardens, Florida) – Jackson State never looked back in the SWAC after edging FAMU 7-6 to open last season. A lively crowd at Hard Rock Stadium, the two marching bands and an ESPN2 broadcast add to the regular-season’s most important SWAC matchup.

Alcorn State at Southern (Oct. 15) – Southern won with a walk-off field goal last season, ending Alcorn’s 4-0 start in the SWAC and handing the Braves the first of three losses in their final four games. This is the second consecutive year the matchup is in Baton Rouge.

Grambling State vs. Southern (Oct. 26 in New Orleans) – This is the 49th matchup since the all-time series was rebranded as the Bayou Classic, and quite conveniently the rivals are knotted at 24 wins apiece. Garrett Urban’s fifth field goal of the game with two seconds remaining lifted Grambling to a 29-26 win last Thanksgiving weekend.

Incredibly, a SWAC team doesn’t have a win over an FBS opponent since Grambling State beat Oregon State under Eddie Robinson in 1978.

(SWAC seeks improvement out of conference)

The SWAC has led all conferences in attendance average in 43 out of the first 44 FCS seasons, highlighted last season by Jackson State’s record 42,293 average over six games at Mississippi Veterans Memorial Stadium.