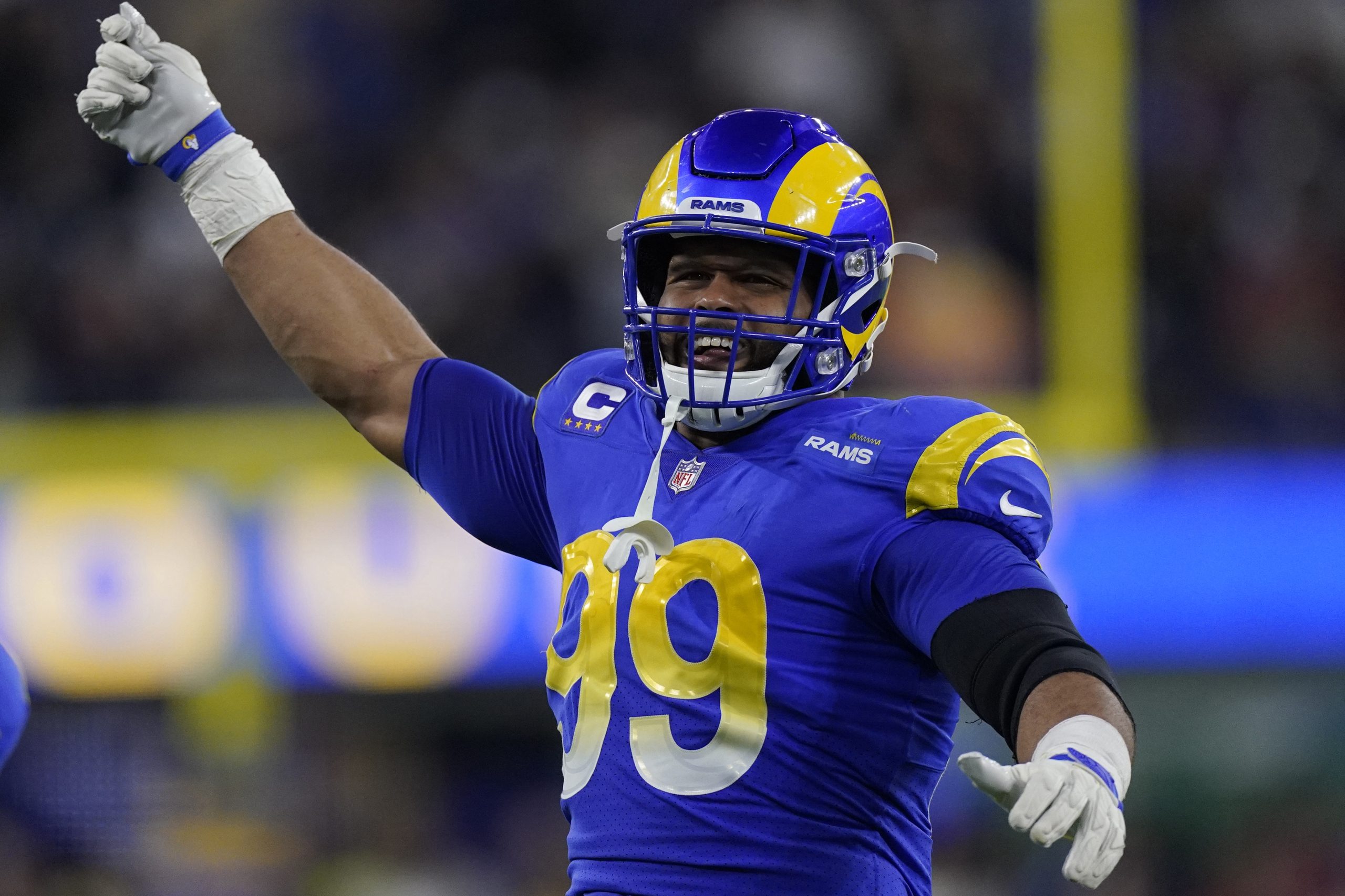 All-time greats often are not truly appreciated until after they have called it a career.

Following speculation he could hang up the cleats in the wake of the Los Angeles Rams’ Super Bowl LVI triumph, Aaron Donald has ensured the NFL world will have more time to marvel at his remarkable talents.

It was revealed on Monday that the Rams had restructured Donald’s contract to guarantee him $95 million over the next three seasons.

No years were added to Donald’s deal, but the added guaranteed money will make the seven-time All-Pro defensive tackle the highest-paid non-quarterback in NFL history.

Eye-watering money, but the Rams won’t have felt the need to look even twice at a contract that arguably represents the NFL’s most expensive bargain.

Simply put, no non-quarterback has done more to impact the game than Donald since he entered the league.

Drafted 13th overall in 2014, Donald has amassed 98 sacks in his pro career – the most of any player in that time – with Chandler Jones his nearest challenger on 90.

Looking at tackles for loss, none of his contemporaries come close to matching Donald’s production. He has racked up 150 tackles behind the line of scrimmage since 2014, 36 more than the next-best player – Cameron Jordan.

It is a similarly absurd gap between Donald and Jordan in terms of overall quarterback pressures. Donald has racked up an astonishing 735 pressures since entering the NFL. Jordan (544) is the only other defender even above 500.

The title of most disruptive defender in the league is one Donald has monopolized, and he has done so despite the substantial energy opposing offenses have put into slowing him down.

Last season, no pass rusher was the subject of more double teams than Donald, who earned the attention of two pass protectors 182 times.

Despite the rate at which he was doubled, Donald still recorded a stunt-adjusted pass rush win rate of 63.83%. Only one other pass rusher with at least 100 one on one pass-rush snaps, Myles Garrett (53.56), posted a win rate above 50%.

Doubled 95 times as a run defender, no player (min. 100 one on one run defense snaps) had a better double-team adjusted run disruption rate than Donald’s 58.29%. Lowering the threshold to 50 one on ones, Donald was still fourth in 2021.

The numbers don’t always tell the entire story, but in Donald’s unique case, they are enough to encapsulate his value. He’s a true unicorn who can impact the game at any point regardless of situation.

“It’s not great news; it’s phenomenal, outstanding, any nice adjective that you can place around it,” Rams head coach Sean McVay told SiriusXM of Donald’s restructure. “It’s a big deal, and he’s earned it. And he truly is one of one, in my opinion. This means so much to me, to our organization.”

And Donald saved his best for the moments that meant most to the Rams last season.

Shining on the Brightest Stage

From the wild-card round rout of the Arizona Cardinals through to the nerve-jangling win over the San Francisco 49ers in the NFC championship game and the Super Bowl defeat of the Cincinnati Bengals, there was a clear theme that defined the Rams’ surge to the Lombardi Trophy: Their defensive front overwhelmed opponents.

It was Donald who unsurprisingly led the charge, ably supported by Von Miller, who the Rams will face when they raise their Super Bowl banner against the Buffalo Bills in Week 1 of the 2022 season, and Leonard Floyd. Donald ended the postseason with 29 pressures, while Miller recorded 27 and Floyd 22.

The depth of pass-rushing talent at the Rams’ disposal prevented Niners quarterback Jimmy Garoppolo and Bengals star signal-caller Joe Burrow from knocking them off in contests that went down to the wire.

It was fitting that the final say went to Donald, who ended the Bengals’ hopes of sending the Super Bowl to overtime with a game-tying field goal by knifing past left guard Quinton Spain with his devastating hand speed and using his flexibility to flatten his angle to Burrow, flinging him to the turf as the quarterback’s hurried desperation fourth-down heave fell incomplete.

A jubilant Donald pointed to his ring finger in celebration. He now has that Super Bowl ring secured, along with a contract that properly reflects his importance to the reigning champions.

Donald isn’t the straw that stirs the drink for the Rams, he’s the chief ingredient in a cocktail of premium talent that has propelled the Rams to the NFL mountain top.

Sure, the trade for Matthew Stafford provided the critical final seasoning for Los Angeles, but the mix doesn’t work without Donald’s ability to blow up the best-laid plans of their opponents. Those foes had hoped talk of Donald’s retirement would remove the headache of game planning to try to stop him.

However, the Rams have put such hopes to bed and made sure offensive coordinators across the league will have sleepless nights for a few more years when preparing to face an all-time great who will continue to provide value for Los Angeles even at his new exorbitant price tag.