The Ultimate Arsenal: Who Has the 'Most Valuable' Pitches in Major League Baseball? | The Analyst 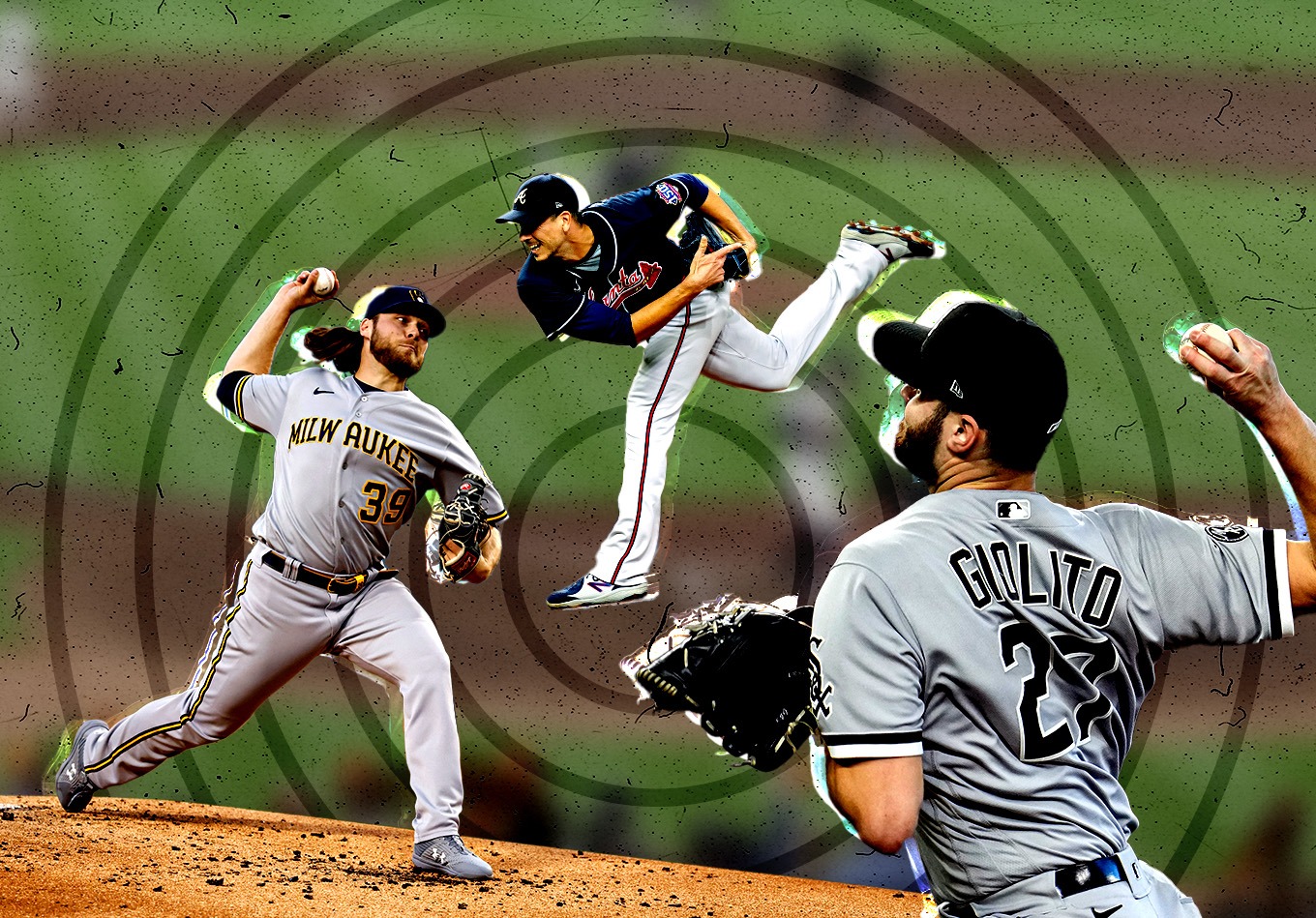 The Ultimate Arsenal: Who Has the ‘Most Valuable’ Pitches in Major League Baseball?

These are the signature pitches that have helped hurlers reach the top of their craft and become legends throughout the history of Major League Baseball.

Fans, opposing batters and media certainly have their opinions about which current pitchers are the best at throwing each pitch in today’s typical repertoire. But by using raw value, we can actually measure how much value each pitch of a hurler’s arsenal brings to a team.

Raw value (RV) is calculated by assigning value to all the different outcomes a pitch has instead of waiting for the conclusion of the at-bat. Pitchers are credited for coaxing opposing hitters into a poor launch angle, exit velocity or horizontal spray angle (i.e., pop-ups).

RV also factors in whether a pitcher has the stuff to get a swing and miss on a strike or the command to lure a batter into swinging at a ball. Basically, pitchers get a boost for forcing hitters into bad decisions and dinged for allowing positive results.

So by adding up all the RV accumulated on each pitch in 2021, we can figure out who has the most valuable pitches in each respective type heading into this season.

Here’s that list, along with a little insight into the when and where the most valuable pitches in baseball are utilized.

Rodón was dominant for most of last season, finishing with a 2.37 ERA and 185 strikeouts over 132.2 innings for the Chicago White Sox in 2021. The hard-throwing left-hander was also fifth in the AL Cy Young voting.

How did he do it? By going right after hitters with his four-seam fastball while mixing in an equally devastating slider. The combo made up for 85.0% of his pitches thrown last season.

Whiff+ measures a pitcher’s ability to generate swings and misses, and BIP+ tells us about the quality of contact against a particular pitcher or pitch and is also standardized to 100. For this stat, lower is better since it indicates worse contact quality.

Rodón, however, missed some time in August with a shoulder injury. He made four starts in September to get ready for the playoffs but wasn’t quite the same. His fastball averaged 92.9 mph and topped out at 97.8 mph.

With nearly two weeks off before facing the Houston Astros in Game 4 of the American League Division Series, Rodón averaged 95.8 mph and hit 99.4 mph with his four-seamer but didn’t have the stamina to go more than 2.2 innings in a 10-1 defeat.

Rodón is reportedly healthy heading into 2022, so that four-seamer should be on full display to open the season.

When you think about the Milwaukee Brewers’ dynamic starting rotation, Adrian Houser probably isn’t the first, second or even third pitcher who comes to mind.

But Houser (10-6, 3.22 ERA) and his two-seamer should start getting the attention they deserve.

Wisely, the right-hander throws his knockout pitch a ton – it was the 22nd most-used pitch and the third most-used two-seamer in baseball last year. It also accumulated an MLB-best minus-15.9 raw value.

Houser has no qualms about throwing the two-seamer to any hitter, any part of the plate and in any count. He threw it 54.2% of the time in 2021, far more than his second most-used offering – his curveball at 14.5%. In fact, it’s his most used pitch in any situation.

With two strikes, that usage jumps to 62.2% against righties. That’s when he often attempts to bury the fastball down in the strike zone to get either a chase or weak ground ball.

Houser’s two-seamer averages 93.6 mph, but he can ramp it up to 96.2 when necessary. And while it doesn’t have mind-blowing movement on it, he gets slightly above average both run and sink on the pitch.

That’s likely due to the way he lowers his arm angle somewhat on the delivery, but it’s not enough so that batters are able to pick up the difference.

Part of what makes the right-hander so tough is that he never really throws a traditional fastball. According to our TVL data, a majority – 52% – of his offerings are deemed cutters, while only 10.6% of all his pitches are two-seam or four-seam fastballs.

And those cutters totaled an MLB-best minus-31.8 raw value and came in at an average velocity of 95.2 mph – the second highest in the majors in 2021 among those who threw it at least 600 times – and with a spin rate that was also the second highest next to Yu Darvish’s cutter.

The right-hander uses that cutter to get ahead in counts (53.7% in 2021), aiming primarily for the low-and-away part of the zone to both left- and right-handed batters. With two strikes, he relies heavily on that cutter against lefties, throwing it 53.9% of the time.

And after hitting the low-and-away part of the zone early in the count, he attempts to coax worrisome batters into chasing that pitch further out of the zone.

If he lives up to his billing as a strong sleeper pick for the 2022 AL Cy Young Award, it’ll likely because Cease continues to excel with his slider.

Cease likes to keep opposing batters off balance to open at-bats, diving the slider low and away 36.0% of the time against righties to keep them off the first-pitch fastball (50.1%).

With two strikes, the slider becomes his put-away pitch against righties. He throws it 45.4% in those spots with designs on moving it off the plate low and away.

It’s quite difficult to judge between that disappearing pitch (which had the highest spin rate of any slider thrown at least 600 times in 2021) and a four-seamer that he also likes to paint on the lower outside corner with two strikes.

Considering it was the most valuable in its pitch type with a minus-19.4 raw value, it shouldn’t be such a surprise that Morton threw his curveball more than any other pitch (36.7%) – even his four-seam fastball (36.2%) – in 2021.

Against lefties, he’s almost primarily a two-pitch pitcher with the four-seamer and curve. And he became a little bit more curveball heavy versus lefties over four postseason starts during last year’s run to the title with the Braves.

During the regular season, he tried to throw them either a four-seamer up and away (41.5%) or a curveball down (52.0%) on most occasions. In the playoffs, he threw the curve (mostly down and out of the zone) 60.0% of the time.

It should be interesting to see if he continues that trend in 2022.

Giolito relied heavily on his great changeup (throwing it 31.8% of the time) in 2021 while solidifying his place as a key member of the AL Central division champs’ rotation.

The right-hander will throw his change to either side of the plate, but what’s remarkable is that he’s willing to leave it higher in the zone – an absolute no-no for most pitchers.

Giolito, however, can get away with it because hitters have trouble distinguishing it from the high fastball that’s commonplace on two-strike counts across the league.

His confidence in the pitch, which totaled an MLB-high minus-15.9 raw value last season, allows him to throw it any count – and he actually goes to it more when behind. As a result, hitters can never sit on a fastball.

To illustrate, the chart below is a look at when Giolito utilized his changeup last season.

Gausman rode his splitter (and nobody threw more in 2021) all the way to the best season of his career. His splitter totaled an MLB-best minus-17.1 raw value while he went 14-6 with a 2.81 ERA for the surprising Giants.

The right-hander threw it 36.3% of the time at an average of 83.6 mph compared to 52.8% and 94.6 mph for his four-seam fastball. But the splitter really becomes the go-to pitch when Gausman moves ahead in the count.

He threw it 51.1% of the time in those situations, often burying it across the bottom of the zone.