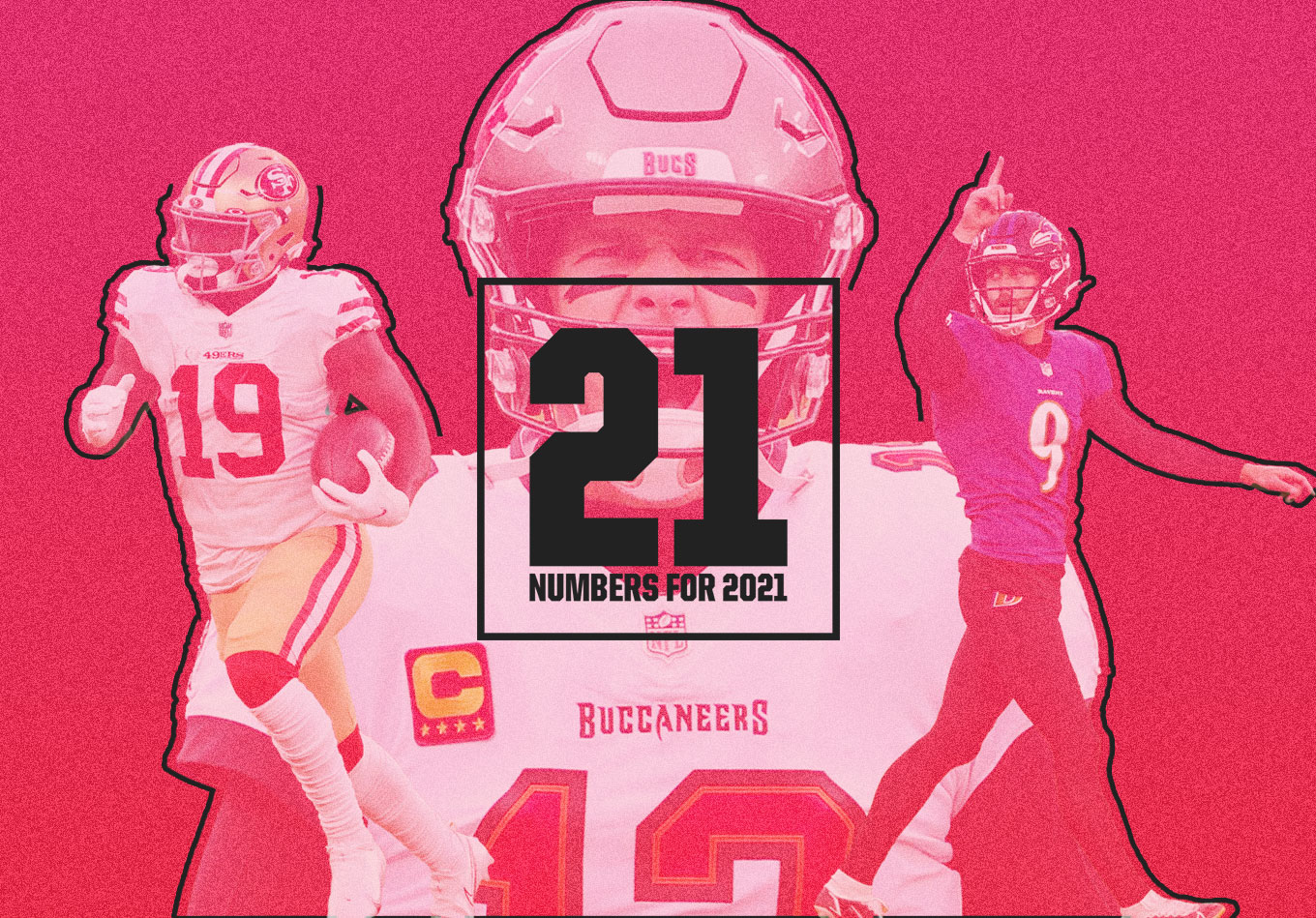 What a year it’s been. A receiver surpassed Justin Jefferson’s rookie receiving yards record from 2020, a defensive end recorded at least half a sack in 11 straight games, the game’s best defensive player made his seventh straight All-Pro team, and a wide receiver won the ultra-rare receiving triple crown. And that’s only from the two teams with a game still to play.

There are thousands of numbers that help highlight this fantastic NFL season.

Here are 21 of them that help tell the story of this season, starting with the biggest change entering the year and the G.O.A.T sailing into retirement after one final elite campaign.

Games played by each NFL team this season, the first time a 17th game was added to the NFL calendar. While most of the playoff spots were already wrapped up entering the first ever Week 18, the final game of the regular season didn’t disappoint, going the full distance before a Daniel Carlson field goal with no time remaining in overtime punched the Las Vegas Raiders’ ticket to the postseason and knocked the Los Angeles Chargers from the dance.

Passing yards by Tom Brady this season, a total that led the league in what turned out to be his final season. It was only Brady’s second time leading the league in passing yards since 2008 and was a career high mark. If this is indeed the end for Brady, the 2021 season was a sterling end to a stunning career, as he leaves playing some of the best football of his life.

The average yards gained or prevented versus the expected amount by the Buffalo Bills, who finished first in our EVE rankings. Essentially, the Bills were better in all situations by a yard compared to the league average team, a remarkable number. The top-10 teams in our EVE metric all made the playoffs.

Darius Leonard forced fumbles, the most by a non-pass rushing linebacker since 1994. It highlighted another banner season from Leonard, his third All-Pro appearance in four seasons in the NFL.

Deebo Samuel rushing touchdowns, far and away the most by a wide receiver in a single season in NFL history. Samuel, basically singlehandedly, carried the San Francisco 49ers offense to the NFC championship game in one of the most unique and spectacular individual seasons ever. Samuel finished the season fourth among all players with 50 rushing attempts in yards per carry (6.19) and first among all qualified players in yards per catch (18.2).

Total tackles by Foye Oluokun, the most by any player since Chris Spielman’s 195-tackle season in 1994. It wasn’t a banner season for the Atlanta Falcons’ defense, but Oluokun was a rock all season, recording 55 more tackles than his next closest teammate.

Straight seasons that two-point plays have a higher successful conversion percentage when running the ball versus throwing the ball. This season, teams converted at a clip of 55.6% when running and 45.9% when throwing. So, remember those percentages the next time your coach calls a run play on a two-point conversion. Because even though the pass is the sexier play, the run is more successful.

The length of Justin Tucker’s game-winning field goal in Week 3 over the Detroit Lions, the longest field goal in NFL history. The game’s best field goal kicker, bar none, Tucker saw his 66-yard attempt hit the field goal post before just climbing over the bar, snatching a 19-17 victory from the jaws of defeat.

Rushing yards by Rashaad Penny over the final three weeks of the season. Already eliminated from the playoffs, the Seattle Seahawks played their final three games without a lot of fanfare, so you might have missed Penny’s explosive exploits to end the season. Penny, on the strength of his final three games, ultimately led the NFL in yards per carry (6.29).

Fourth-down conversions by the Chargers, the most by a team since 1991. As analytics became more mainstream, teams were more aggressive in going for it on fourth downs. In a season in which the NFL had more fourth-down conversions than ever before, it was Brandon Staley and Justin Herbert that were the poster boys of aggressiveness. Even in seemingly odd circumstances, like on a fourth-and-1 from their own 18-yard line in their must-win Week 18 game, the Chargers left their offense on the field.

The number of rushing yards between Jonathan Taylor’s league leading total and second place – the largest discrepancy since 2009. Taylor was exceptional all season, which was good, because the Indianapolis Colts relied on him so heavily. How did that manifest itself? The Colts went 9-1 when Taylor rushed for 100 yards and 0-7 when Taylor didn’t reach the century mark.

Sacks by T.J Watt, tying Michael Strahan’s sack record. Because he missed a couple of games due to injury, Watt hit the number in only 15 games. And, maybe most remarkably, he was five sacks off the record with only two games to go. But a monster four-sack performance against the Cleveland Browns in Week 17 got him to within one, before he reached the 22.5 mark by sacking Tyler Huntley in the regular season finale.

Creed Humphrey’s pressure rate allowed percentage (PR-A%), which calculates an offensive lineman’s tendency to be beaten and allow a defender to get into the backfield and have an unabated path to the quarterback. With centers sporting an average 5.3 PR-A%, Humphrey was the best center by leaps and bounds at limiting pressures. And yes, Humphrey was just a rookie this season.

The successful onside kick rate, the highest percentage since the new kickoff rules were installed prior to the 2018 season. Three of the nine overall successful onside kicks were recovered by the Detroit Lions and, oddly enough, all three came against NFC West teams (San Francisco 49ers in Week 1, Los Angeles Rams in Week 7, Seattle Seahawks in Week 17). The Rams meanwhile, were the worst in onside kick situations, allowing three successful recoveries in six attempts.

Mark Andrews receptions this season, pacing the tight end position. It was only the fifth all-time season in which a tight end caught at least 105 passes. When the top tight ends are mentioned heading into next season, Andrews needs to be one of them.

Teams had at least one 50-yard rush this season, the fewest since the NFL expanded to 32 teams. With teams protecting against the big play, there have been fewer opportunities for teams to exploit one hole at the line of scrimmage and run for big chunks of yardage. Five of the top eight players in rushing yards this season did not record a single run of 50 yards. 2013 was the last time more than two of the top eight rushers failed to have such a run.

Aaron Rodgers’ touchdown/interception ratio, his second straight season leading the NFL in that category. Remarkably, Rodgers has played 10 or more games in nine seasons since 2011 and in all nine of those seasons, Rodgers has finished in the top three among all quarterbacks in TD/INT ratio. If this was his swan song season in Green Bay, he’s likely exiting after a second straight MVP season.

Interceptions by Trevon Diggs, part of the Dallas Cowboys’ highly improved defense that led the NFL in takeaways (34). Diggs, who recorded at least one interception in each of the first six games, became the first player since 1981 to record 11 or more interceptions in a single season.

The longest reception in the league this season, pulled off by Quez Watkins of the Philadelphia Eagles in Week 2 against the 49ers. Remarkably, not only did the play not go for a touchdown, but the Eagles didn’t even score on the drive, failing on a fourth down from the 49ers three-yard line.

Joe Burrow’s well-thrown percentage, a league-leading number that has helped propel the Cincinnati Bengals all the way to the Super Bowl. With his special trio of wide receivers, Burrow is one game away from helping the Bengals win their first ever Super Bowl.