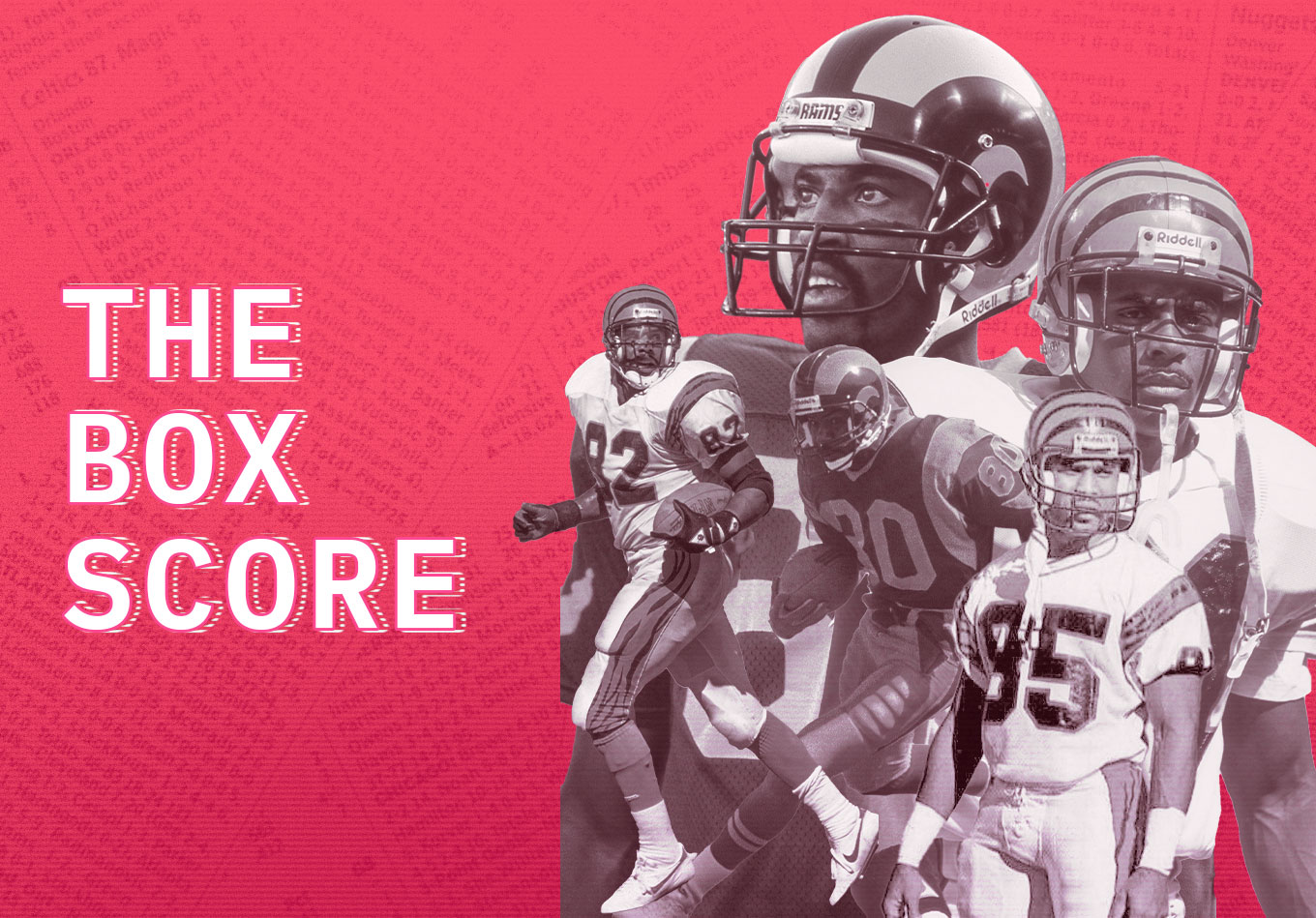 Another Day the Bengals, Rams Were ‘Super’: Boomer, Everett and the Five 100-Yard Receivers

Ahead of their much-anticipated matchup in Super Bowl 56 on Sunday, we’re revisiting a historic meeting between the Cincinnati Bengals and Los Angeles Rams in 1990 that came on the heels of a locker room controversy.

The Super Bowl 56 matchup between the Cincinnati Bengals and Los Angeles Rams will occur 50 years after their first one and immediately become the most important between the two franchises.

But they’ve met 14 times previously, led by a wild, historic game more than 31 years ago.

The Bengals’ 34-31 overtime win over the Rams on Oct. 7, 1990 at Anaheim Stadium marked the NFL’s first regular-season game to have five players reach the 100-yard receiving mark.

The feat had only been achieved previously by the San Diego Chargers in an epic overtime win over the Miami Dolphins in the 1981 divisional playoff round.

It’s been matched only one more time, also involving the Rams when they beat the Minnesota Vikings in the 2018 regular season (Rams star Cooper Kupp was the game’s leading receiver with 162 yards).

Games with 5+ Players with 100+ Receiving Yards (All Time)

A scenario off the field stole some of the spotlight from the 1990 Bengals-Rams game, but the passing attacks proved to be “Super” in their own right that day. (Take the Super Bowl 56 Quiz)

The rarity of the Bengals and Rams combining for five 100-yard receivers in their 1990 matchup wasn’t immediately recognized afterward, although that somewhat was due to the Bengals being surrounded by controversy the week before.

Coach Sam Wyche was fined close to $30,000 by the NFL for refusing to allow a female reporter into his team’s locker room after a Monday night loss in Seattle. Six days later, close to 10 female reporters entered it following the Rams game.

Boomer Esiason’s then-Bengals single-game record 490 passing yards were even misreported afterward because the official statistics failed to include a 19-yard pass, but they were updated later to reflect his 31-of-45 passing with three touchdowns.

The 1988 NFL MVP completed all five of his attempts on an OT drive that began at the Bengals’ 11-yard line and ended with Jim Breech kicking a game-winning, 44-yard field goal nearly 12 minutes into the extra session.

The Bengals had three of the five 100+ receivers, but it didn’t include Pro Bowler Eddie Brown, the team’s usual deep threat, who sat out the game.

“The defenses were not the leaders out there today,” Rams coach John Robinson said afterward.

The win was Wyche’s 55th with the Bengals and tied him with Paul Brown for the franchise record, but after his team improved to 4-1, he was defiant, still irked by his league fine in the previous week and that his team again played on the West Coast following a Monday night game while the Rams were coming off a bye.

“This is about as big as win as I’ve ever had,” he said in the locker room, opening his postgame interview with a towel around his waist, although he wore pants underneath. Wyche also joked with a male radio reporter who wore a wig and a dress.

How the Game Unfolded

The Bengals jumped to a 21-0 lead with touchdowns on their first three possessions, including Esiason connecting on 27- and 9-yard scoring passes to Brooks in the first quarter (the lefty QB later had a 14-yard TD pass to running back Harold Green in the third).

Rams signal caller Jim Everett (25 of 36, 372 yards) threw TDs to Anderson (55) and tight end Damone Johnson (nine) during the Rams’ comeback, and they tied the game at 28 on Cleveland Gary’s second scoring run with 12:50 remaining.

The Bengals answered with the first of Breech’s two field goals (a 40-yarder with 8:43 left), but the Rams’ Mike Lansford forced overtime with his own 40-yarder at the 1:36 mark. Each team had two possessions in OT.

“It was hard to concentrate this week, with the whole circus atmosphere going on around us. The coaches tried to go to a basic, simple offense,” said Esiason, whose 490 passing yards stood as the Bengals’ single-game record until this season when Joe Burrow went all Scrooge on the Baltimore Ravens on Dec. 26 with 525.

Of course, Anderson remains the NFL record holder for receiving yards in a game, having torched the New Orleans Saints for 336 (all courtesy of Everett) less than a year earlier on Nov. 26, 1989.

After going 11-5 in 1989, the Rams finished a disastrous 5-11 in ‘90, including the OT loss to the Bengals, which dropped them to 1-3. The Bengals went 9-7, won a tiebreaker to finish atop the AFC Central, and captured a first-round playoff game.