Easy Mode: The Most Single-Game Receiving Yards in NFL History | The Analyst 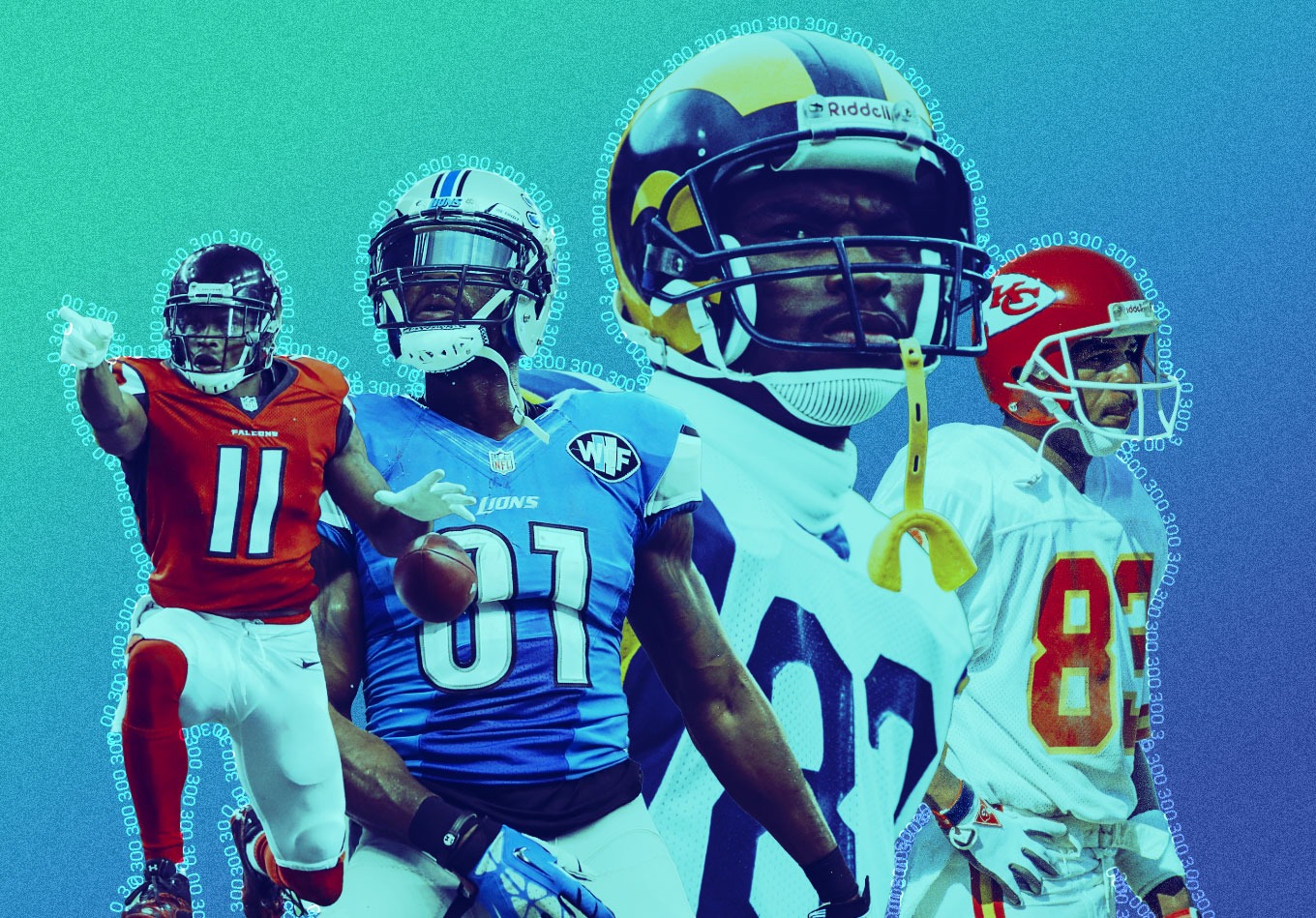 Easy Mode: The Most Single-Game Receiving Yards in NFL History

That’s strange because Qadry Ismail is on this list. Yeah, Qadry, not even his brother Raghib “Rocket” Ismail of Notre Dame fame. But no Randy Moss. Kenny Britt, yes. Randy Moss, no. We’ll get by without him, but it somehow feels less fun with no Randy Moss (you can always read our best fantasy football seasons by wide receivers of all-time article to fulfil your Randy Moss cravings).

That said, Jerry Rice and Calvin Johnson will be making appearances, and they’ll be dressed quite well.

So who’s the leader on this list? It’s not Jerry Rice. It’s not Calvin Johnson (but should it be?). It’s not Randy Moss. It’s Willie “Flipper” Anderson. Now, if you’ll follow Flipper and I through these doors to the 300-Yard Club, our first stop, where you’ll occasionally be able to put a face to a name but probably won’t confuse this with the Hall of Fame…

The sixth-best single-game yardage total for a pass-catcher actually came in what may have been Julio Jones’ worst statistical season between 2014-19. He still managed 83 catches for 1,409 yards in 14 games, but he sandwiched the 300-yard game between performances of 16 and 29 yards with a total of three catches.

The majority of his receptions came in the first half, but he saved the big play for the end with a 75-yard score on his last catch:

Jones’ game was impressive, but his quarterback’s might have been better. Matt Ryan passed for 503 yards on 37 attempts for an average of 13.59 yards per attempt. He’s the only player since the NFL merger to attempt at least 37 passes in a game with a YPA that high.

It was Julio’s second of three games with 250 yards or more. No other player has done it more than once.

Box entered the NFL as a halfback. It didn’t last after averaging 2.1 yards per carry his rookie season for a whole 62 rushing yards.

Five years after the first 300-yard game in NFL history, Box came a single yard short of matching the record while scoring four TDs in this one of 22, 32, 67 and 82 yards. Box only played five seasons in the NFL, and the 302 yards in one game ended up accounting for 11.3% of his total career receiving yardage.

Another Detroit pass-catcher blew past the franchise yardage record 63 years later but only scored one TD and got stopped short of the goal line three times. More on that to come.

The first 300-yard game in NFL history came on Thanksgiving Day of 1945, not three months after the end of World War II, from a player who four years prior had quit the NFL to coach a high school team in Arkansas. The decision to come back proved fruitful in the regular season with the receiving record and in the playoffs with the Rams’ NFL championship in a 15-14 win over Washington. It was the franchise’s Ohio finale before heading west to Los Angeles.

It’s not the only notable record Benton was a part of after resuming his playing career. In 1943, Benton played for the Chicago Bears. Quarterback Sid Luckman threw for seven touchdowns in a game that season, and Benton was on the receiving end of two.

Luckman’s record still stands, though it has been equaled seven times. Benton’s does not, though it lasted for 40 years and one month until…

Hope you’re ready to be informed about perhaps the oddest receiving performance in NFL history, and one that at the time established a single-game NFL receiving record with the first post-merger 300-yard receiving game. Paige reached 309 yards on just eight catches. The other five receivers to reach 300 yards did so on an average of 12.6 catches for 24.9 yards per catch. All 300-yard receiving games may be unlikely, unsustainable, impossible to replicate, whatever. But Paige’s magical 60 minutes of football were particularly unique in that he finished that 1985 season with a total of 943 receiving yards in 16 games. Paige had one 1,000-yard receiving season, and barely – 1,021 in 1990 – before playing three games in his final season of 1991, but innumerable 1991 Tecmo Super Bowl games under the thumbed tutelage of many. It’s just that he spent them blocking for Christian Okoye and Barry Word.

But back to that game because there’s even stranger stuff to discuss. Todd Blackledge started at quarterback for the Chiefs, and it began well with a 56-yard pass to Paige just under five minutes into the game. In the second quarter, after Blackledge had departed, backup Bill Kenney connected on an 84-yarder to Paige to give the Chiefs a 28-3 lead over the San Diego Chargers. Blackledge and Kenney combined to attempt just 23 passes in the contest and completed just 13 for 343 yards, 90% of which went to one Stephone Paige, who never had more than 10 catches in a game in his career. But he did have another 206-yard receiving performance in his career, which is still more than Randy Moss ever had.

But one of Moss’ contemporaries remains the king of the big yardage game, even if he doesn’t have the record…

Seven seasons into a much-too-short nine-year career, Johnson had his biggest game in terms of yardage and receptions but only scored once. It’s feels ridiculous to note that he almost had four touchdowns in this game when he only finished with one, but three of his other catches set Detroit up inside the Dallas 3-yard line.

Calvin Johnson was an NFL receiver that stood out from NFL receivers. Despite retiring at 30 still very much an elite receiver, he’s the only player in NFL history with four games in the top 100 for single-game receiving yards – the worst of which came in at 214 yards. In all, he had six 200-yard receiving games, including a 211-yard effort in one of his two career playoff games. Lance Alworth, who managed seven straight 1,000-yard seasons in the 1960s, is the only other player in NFL history with five regular-season games of at least 200 yards, while Jerry Rice joins the party if we include the playoffs. Including the playoffs, only 13 players have even had three 200 or more games.

So Johnson was 7 yards from the single-game record, but why limit this to 60 minutes? He preceded his 329-yard game with one of 155, and that too ranks second over a two-game span. That record belongs to Josh Gordon’s 498-yard total with the Cleveland Browns in 2013.

But here’s where the conversation-starting tinge of controversy comes in. Johnson had 329 yards in a four-quarter football game. Fourteen years prior, Flipper Anderson’s record came in overtime…

Forget single-game receiving yards for a moment. As a general football number, 336 is still in today’s NFL a solid number when talking about quarterback passing yards for a single game. To everyone. It felt even bigger in 1989 before the NFL passing game became what it is now. Now, consider what it meant for one receiver to haul that in. Prior to Anderson’s game, only 11 players had ever gone over 250 receiving yards. Now, it’s 30.

But Anderson would have settled for 250-plus rather than 300 if his game had ended after 60 minutes. He had 296 yards at the end of regulation, and a missed field goal as the clock ran out allowed for OT. Anderson’s first catch in OT put him at 310 yards to surpass Paige, and his last came on a third-and-11 to put the Rams in field goal position to win the game after being down 14 with under three minutes to play in regulation. There you have it: 336 receiving yards in a single NFL game.

It was Jim Everett slinging footballs Anderson’s way with the pair combining for just over half of the team’s 29 completions for the game, one that was televised on ESPN’s Sunday Night Football. You don’t need 4K TV to wonder now how they played football on that Superdome artificial turf. Anderson’s 15-catch Week 12 accounted for 34% of his 44 catches for the season, which went for 1,146 yards. All of the numbers here sound like video game numbers, but 44 for 1,146 might top the list. Anderson was a downfield threat in the extreme with a yards-per-catch average of 20.1 for his career and 26.0 for 1989, making him the only qualifying player since 1976 to average even 25 yards per catch for an entire season.

Anderson didn’t have another game before or after this one with more than eight receptions, and he managed to crack 100 yards just eight other times in his career.

The rest of the list of players to surpass 275 yards in a game is dominated by the San Francisco 49ers. There have been five games in that 275-299 range, and three belong to the 49ers. All came within an 11-year span, but none happened with the same QB. It had to pain Hall of Famer Jerry Rice that Joe Montana’s No. 2 wide receiver had a bigger game than him in terms of receiving yards. That’s right, the 1980s ended with the San Francisco franchise record belonging to John Taylor, who caught 11 Montana passes for 286 yards on Dec. 11, 1989 against the Los Angeles Rams. Rice eventually did something about it six NFL seasons later with Steve Young as the two connected 14 times for 289 yards versus the Minnesota Vikings.

That doesn’t mean it’s the most impressive 49ers receiving game. That may belong to Terrell Owens with his 283-yard effort paired up with Jeff Garcia in 2000 for San Francisco. That was a particularly special game because the two connected on 20 passes on 22 targets to set – for the time being – the NFL record for receptions in a game. It’s since been broken by Brandon Marshall’s 21 during his time with Denver and Jay Cutler, but Marshall’s game (200 yards) doesn’t crack the top 100 for single-game receiving yards.

As for the most recent among the top 20, that belongs to Cincinnati Bengals rookie Ja’Marr Chase, whose 266 yards against the Kansas City Chiefs in 2021.

That clears a lot up, but it doesn’t answer everything. Three more related questions:

Most receiving yards by a tight end?

Benton and Box were technically “ends” and not “wide receivers,” but pass-catching positions were different in earlier years of the NFL, so we’ll go back to 1960 for this one. Denver Broncos tight end Shannon Sharpe had 12 receptions for 214 yards in a Brian Griese-led 37-34 overtime win over the Kansas City Chiefs. He’s the only modern-day tight end to appear in the top 100 regular-season receiving totals.

Most receiving yards by a running back?

Only three running backs have had 200-yard receiving games, and this record has stood for nearly six decades. Kansas City Chiefs running back Curtis McClinton had 213 receiving yards on just five catches in a 45-35 win over the Denver Broncos on Dec. 19, 1965. Perhaps more interesting, he didn’t score on any of those despite averaging 42.6 yards per catch. He did, however, score on the ground despite being held to 15 yards on seven carries. The Chiefs had 22 rushing attempts for a total of 0 yards.

Most receiving yards in a playoff game?

And to cap it off, here’s the Randy Moss-less (and Chris Carter-less and Minnesota Vikings-less) top 25 single-game receiving yards leaders going all the way back to 1932:

Most Receiving Yards in a Game