How Much Does Winning the Offseason Really Matter? | The Analyst 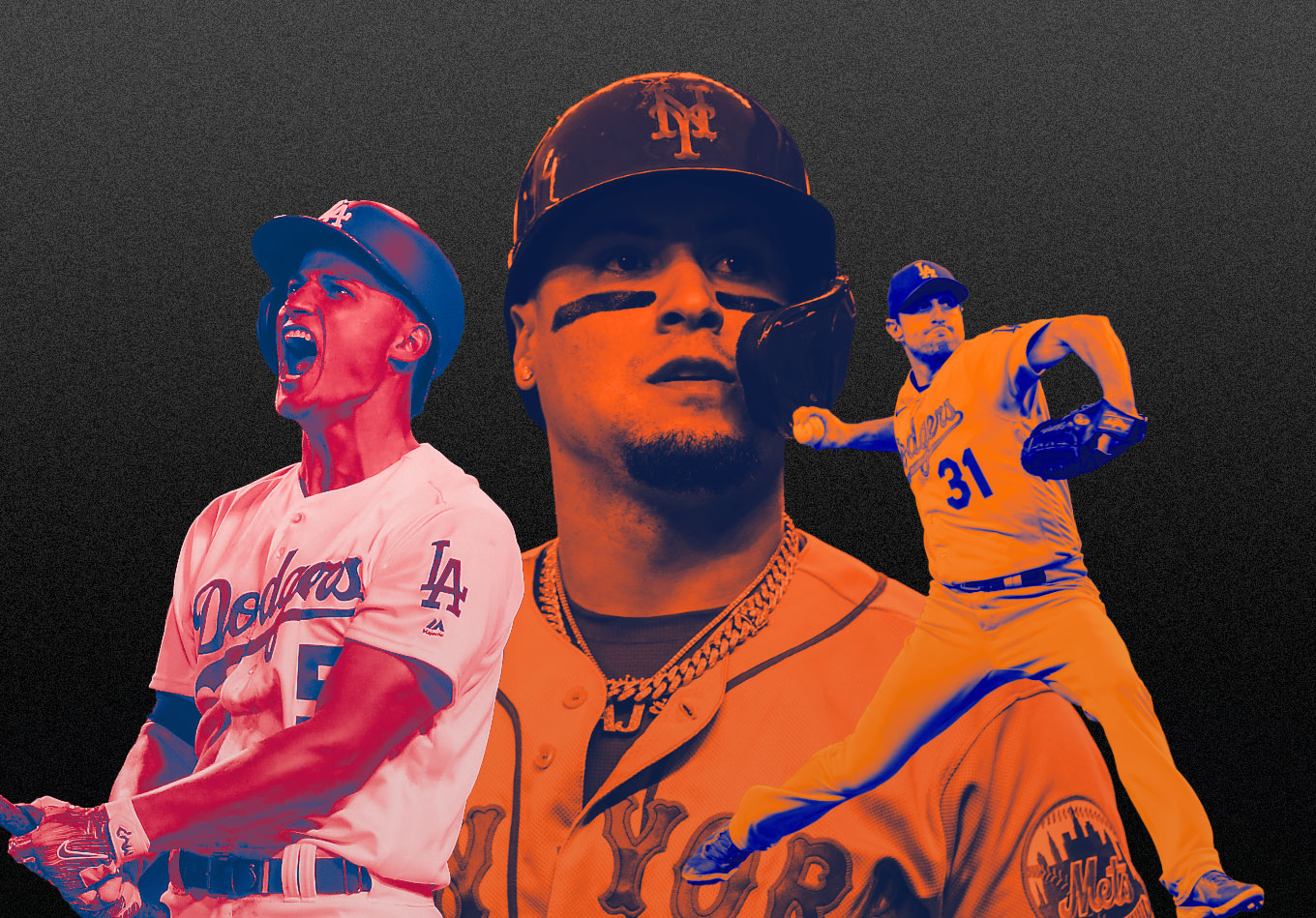 How Much Does Winning the Offseason Really Matter?

The Texas Rangers were big spenders this offseason before everything came to a halt. By paying out the most money in free agency (so far), they’ve guaranteed themselves major improvement in 2022. Or have they? We aimed to find out.

It was the storm before the calm.

The early December deadline for the players and owners to reach a new collective bargaining agreement acted as something of a signing deadline as well, with a record $1.7 billion committed to free agents in the month of November.

Seager finished 23rd in the majors during the regular season with a 144 raw value+ among those with at least 400 plate appearances. Raw value+ (RV+) assigns value to all the different outcomes of each pitch – a batter’s discipline, contact and damage inflicted on a batted ball – instead of waiting for the conclusion of the at-bat.

Semien hit 45 home runs to set a record for a second baseman while finishing 11th in MLB with a 121 discipline+, which in simplest terms, measures a batter’s ability to swing at strikes and lay off pitches outside of the zone.

After they went 68-61 from May 8 on last season, the Detroit Tigers looked to build on that performance by signing two-time All-Star shortstop Javier Baez for six years and $140 million, and left-hander Eduardo Rodriguez to a five-year, $77 million deal. Likewise, the Seattle Mariners picked up AL Cy Young winner Robbie Ray on a five-year, $115 million contract after just missing out on the postseason in 2021.

The New York Mets have designs on bouncing back from their disappointing 77-85 campaign as they inked ace Max Scherzer (three years, $130 million) and outfielder Starling Marte (four years, $78 million) to big contracts.

When the clock quite literally struck midnight, it marked the end of what some called one of the most exciting offseason periods of all time. But what does it all mean? At the time everything stopped, the Rangers and Mets ($254.5 million) were the highest spenders off the offseason.

How often has that translated into a deep postseason run? How often has it made a team more likely to reach the playoffs? Or does it more usually just lead to an improvement in wins the following season?

We’re attempting to answer that question by looking at the top-spending teams of each offseason over the past nine years and comparing how they performed before and after their shopping sprees.

Note: We’re not including blockbuster trades but rather only spending on free agents (using spotrac.com). Additionally, we acknowledge that injuries may have played a role in a team’s performance from season to season.

Return on investment (ROI): Better but short of the postseason.

Offseason: The Yankees (336.5 million) and Washington Nationals were easily the biggest spenders of the 2019-20 offseason, though much of the Nationals’ spending was re-upping with Stephen Strasburg (seven years, $245 million). New York signed Gerrit Cole, who had led the majors with an RV- of 40 in 2019, away from the AL champion Astros on a nine-year, $324 million contract that stole the headlines. The ace right-hander was third in the majors in whiff+ (143), 10th in RV- (62) and had a 2.84 ERA in 12 starts for the Yankees during the 60-game 2020 season.

Offseason: The year of the megadeal. You remember it well. Bryce Harper and Manny Machado waited around long into the offseason. The updates came daily. Finally, the Phillies landed Harper on a historic 13-year, $330 million deal and the Padres got Machado for 10 years and 300 million. The Phils also added Andrew McCutchen for a mere three years and $50 million. Harper hit 35 home runs but had a RV+ of 138 that ranked 34th in the majors among those with at least 200 plate appearances and Machado belted 32 homers but with a RV+ of 118 that ranked 99th. Neither team made the playoffs.

Offseason: The Cubs wanted to get back to the World Series and took a leap of faith by inking Yu Darvish to a six-year, $126 million deal, and not everyone believed it was a good one after Darvish had faltered with the Dodgers in the 2017 Fall Classic. The right-hander struggled with injuries in his first season in Chicago, going 1-3 with a 4.95 ERA in just eight starts.

Offseason: The Dodgers actually spent the most money that offseason, but on re-signing their own players from a team that was coming off an NLCS loss to the Cubs. The Mets were trying to get back to the World Series after falling short in 2016, so they made one of the boldest moves of an otherwise uneventful offseason by signing Yoenis Cespedes to a four-year, $110 million deal. He didn’t take the next step like New York had hoped, playing in just 81 games and hitting 17 home runs after finishing with a combined 66 in the previous two seasons.

Offseason: The Giants and Cubs both spent over $300 million. The Giants added Johnny Cueto (18-5, 2.79 ERA in 2016) and Jeff Samardzija (12-11, 3.81) on big contracts, while the Cubs weren’t satisfied after reaching the NLCS. No, they wanted to end the longest championship drought in pro sports. So they went out and locked up deals with Jason Heyward, Ben Zobrist and John Lackey. The rest, as they say, is history.

ROI: From out of the playoffs to in.

Offseason: Losing is never an acceptable outcome in Boston. A last-place finish? Well, that’s catastrophic. So the Red Sox hoped to bounce back to prominence (they won it all in 2013) by signing Pablo Sandoval to a five-year, $95 million deal and Hanley Ramirez to a four-year, $88 million contract.

In the NL, the Cubs marked their arrivals as a serious contender by signing Jon Lester to a six-year, $155 million contract, but it was the Nationals who spent the most money. Washington was looking to push its roster over the top by adding Scherzer on a seven-year, $210 million deal. He was an All-Star, but the Nationals as a whole took a step back.

ROI: Better, but still out of the postseason.

Offseason: The Mariners signed Robinson Cano to a 10-year, $240 megadeal, and the Yankees tried to cover up for losing their star infielder by inking Masahiro Tanaka out of Japan, Jacoby Ellsbury from the rival Red Sox, catcher Brian McCann from the Atlanta Braves and Carlos Beltran from the Cardinals. They also brought back right-hander Hiroki Kuroda. It didn’t exactly work out. Tanaka went 13-5 with a 2.77 ERA in 20 starts, Ellsbury hit .271 with 16 homers, McCann hit .232 with 23 home runs and Beltran batted .233 with 15 homers.

Offseason: The Blue Jays re-tooled through a bunch of trades and the Angels made the biggest signing in the AL during this relatively quiet offseason by locking up Josh Hamilton to a five-year, $125 million deal. After seeing the rival Giants win their second World Series title in three years, the Dodgers responded by signing Zack Greinke to a six-year, $147 million deal that was the largest contract of the 2012-13 offseason. They also brought in Korean import Hyun Jin Ryu, who would win 28 games for the club over the next two seasons. Hamilton lasted just two disappointing seasons with the Angels.

ROI: From out of the playoffs to in.

Of the 13 teams we featured as the top spenders in these offseasons, only three went from out of the playoffs to qualify for the postseason and only one – the 2016 Cubs – won the World Series. And one of those clubs, the 2016 Giants, won just three more regular-season games after their big spending.

So 10 of the 13 fell into the ‘worse,’ ‘basically no difference’ or ‘better, but out of the playoffs’ categories. The category with the most teams? Worse with five.

You’re probably waiting for our explanation on the 2018 Cubs. Even though they won three more regular-season games, that Cubs team was placed in the worse category because it went from a division championship and a place in the 2017 NLCS to a second-place finish and loss in the ’18 NL Wild-Card Game. That’s a step back.

It certainly doesn’t bode well for the 2022 Rangers and Mariners.