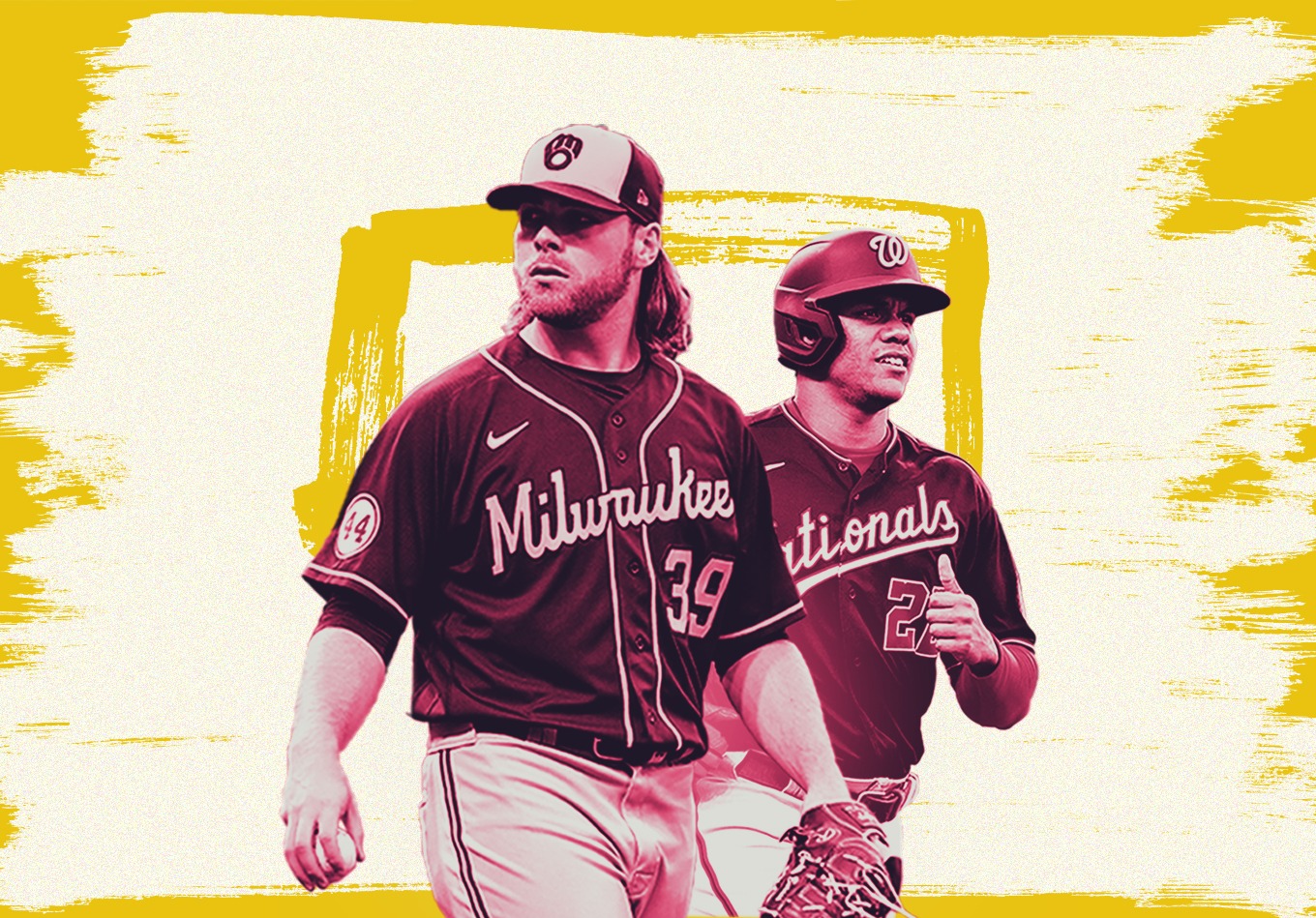 Who Should Win the NL’s Most Prestigious Awards and Not-so-Prestigious Superlatives?

If the voters consider momentum to be of the utmost importance or value of total innings pitched to the highest degree, the crime of the century may be upon us when it comes to the NL Cy Young Award.

According to our advanced metrics (and many of the mainstream statistics, too), there isn’t much of a debate when it comes to who has not only been the best pitcher in the NL, but in all of baseball as well.

Max Scherzer has come on strong in the NL Cy Young race by going 7-0 with a 1.43 ERA in 10 starts since joining the Los Angeles Dodgers, while new teammate Walker Buehler (195.2) and Philadelphia Phillies ace Zack Wheeler (206.1) are said to be better candidates than Corbin Burnes of the Milwaukee Brewers because they’ve thrown so many more innings than Burnes (158.0).

Burnes did have a brief stint on the injured list in April and May, but he’s only been allowed to pitch more than seven innings four times and eclipse the 100-pitch mark five times in his 26 starts mainly because of the way manager Craig Counsel handles his starting pitchers. Still, the right-hander has qualified for this race by six innings – and only 16 fewer than Scherzer’s 174.0 – entering Thursday’s action.

But enough about history and what people think is important when it comes to naming a Cy Young Award winner, who does the data back as the best all-around pitcher in the NL so far this season? If it makes everyone more comfortable, we can name him our NL pitcher of the year.

RV- examines how a pitcher performs throughout each pitch of an at-bat rather than just the result, while RV+ does the same for a hitter. Whiff+ measures a pitcher’s ability to generate swings and misses and command+ can finally tell us which pitchers have the best command.

Buehler probably finishes fourth in this race. He has a solid command+ of 103, but a whiff+ of 107 and a RV- of 73 that falls well short of the other candidates.

Hader entered Thursday’s play leading the majors in whiff+ (194) – a critical metric for a reliever coming into a big spot and needing a strikeout – and second among all bullpen arms with a 33 RV- behind only Liam Hendriks of the Chicago White Sox.

But perhaps what’s most surprising given his delivery and pitch-like-your-hair’s-on-fire style is that the left-hander also has a command+ of 101 – putting him just above the league average in that category. Hader paces MLB in save percentage (97.1), having blown only one save in 34 chances this season. That’s on pace to be the 11th-highest save percentage of the modern era among those with at least 30 opportunities.

Much like the NL Cy Young race, we don’t want to get into the opinions about what should and shouldn’t go into the NL MVP Award. So we’re going into this with more of an old-school mindset. The best player, or in this case, the best offensive player is going to win the award, even if it means naming Andre Dawson of the last-place Chicago Cubs the winner.

So now that we’ve got that out of the way, we realize that Soto isn’t going to get much consideration for NL MVP because the Washington Nationals haven’t been in the pennant chase for much of the season. But the data doesn’t take that into account, it only measures how good the player has been.

And Soto has been historically good in September, batting .473 with a .608 on-base percentage, an .838 slugging percentage, 35 hits, 26 walks, seven home runs and two stolen bases entering Friday’s action. The last player to match or exceed those numbers over any 22-game span was another left-handed slugger named Babe Ruth in 1923.

Soto leads the majors in batting average (.325), walks (131), on-base percentage (.470), OPS+ (182), RV+ (191) and discipline+ (136). He’s also 23rd in BIP+ (162) and 64th in contact+ (102), leaving him one of only eight players who are better than the league average in RV+, contact+, discipline+ and BIP+. Mookie Betts, Justin Turner and Trea Turner of the Los Angeles Dodgers, Jesse Winker of the Cincinnati Reds, Freddie Freeman of the Atlanta Braves, Luis Urias of the Brewers and Trevor Story of the Colorado Rockies are the others.

Max Muncy and Trea Turner, two other MVP candidates, are behind Soto in every category. Fernando Tatis Jr. of the fading San Diego Padres is only better in BIP+ (214), where he ranks second in the NL behind Tyler O’Neill of the surging St. Louis Cardinals.

Ok, let’s have some fun by combining some of our key metrics to determine which NL players are worthy of our top superlatives as the standouts in specific facets of the game this season:

This is the guy who drives pitchers crazy because he always seems to make contact and fight off good pitches. Conversely, he doesn’t often swing at bad ones. Betts has probably been the best of the bunch this season, ranking 21st in contact+ (108) and fourth in discipline+ (124).

The intimidator is a little bit of a more frightening proposition for an opposing hitter because not only does he stay disciplined on pitches out of the zone, but he also mashes anything he hits. Soto and Muncy are the top two candidates in this category because of their discipline+ and BIP+ prowess. And, as mentioned earlier, Soto holds the edge in both BIP+ (162-156) and discipline+ (136-124).

What makes this guy the unicorn? Well, because most sluggers who have an extremely high BIP+ aren’t very good at making contact and are often high strikeout-rate guys. Other guys certainly have higher BIP+ and contact+ numbers, but Machado ranks 30th in the majors in BIP+ at 150 while also coming out above the league average in contact+ at 104. A rare combination of skills to be sure. No one in the NL has a contact+ that high with a BIP+ of at least 150.

Extreme chase+ measures which pitchers are elite when it comes to generating swings on pitches far off the plate. That’s a particularly telling indicator of nasty stuff; in many instances, batters see these pitches as strikes and begin their swing before the ball drops, breaks, sails, or rises well out of the strike zone. And no one’s done this to hitters more than Burnes, who leads the majors with an extreme chase+ of 169.

Ultimately, the goal of strike+ is to discover how good a pitcher is at generating whiffs or getting called strikes based on his pitch types. So this strike machine award goes to the pitcher who’s able to do this while also throwing the ball exactly where he wants (command+) – a devastating combination. Nola gets a lot of hitters to swing and miss his devastating curveball that drops out of the strike zone, but he also generates a lot of called strikes – and very few whiffs relatively speaking – with his two-seam fastball. He ranks second in command+ (124) and third among all starters in strike+ (113).

Not only is Smith hitting .267 with 25 home runs and 73 RBIs for the playoff-bound Dodgers, but he also ranks first in the NL in framing runs with 11.9. We equate that as the catcher saving Los Angeles pitchers 11.9 runs over the course of this season due to his ability to properly frame pitches. He gets some strike calls on pitches outside the zone and makes sure umpires don’t miss pitches inside the zone. In other words, he’s a pitcher’s best friend.