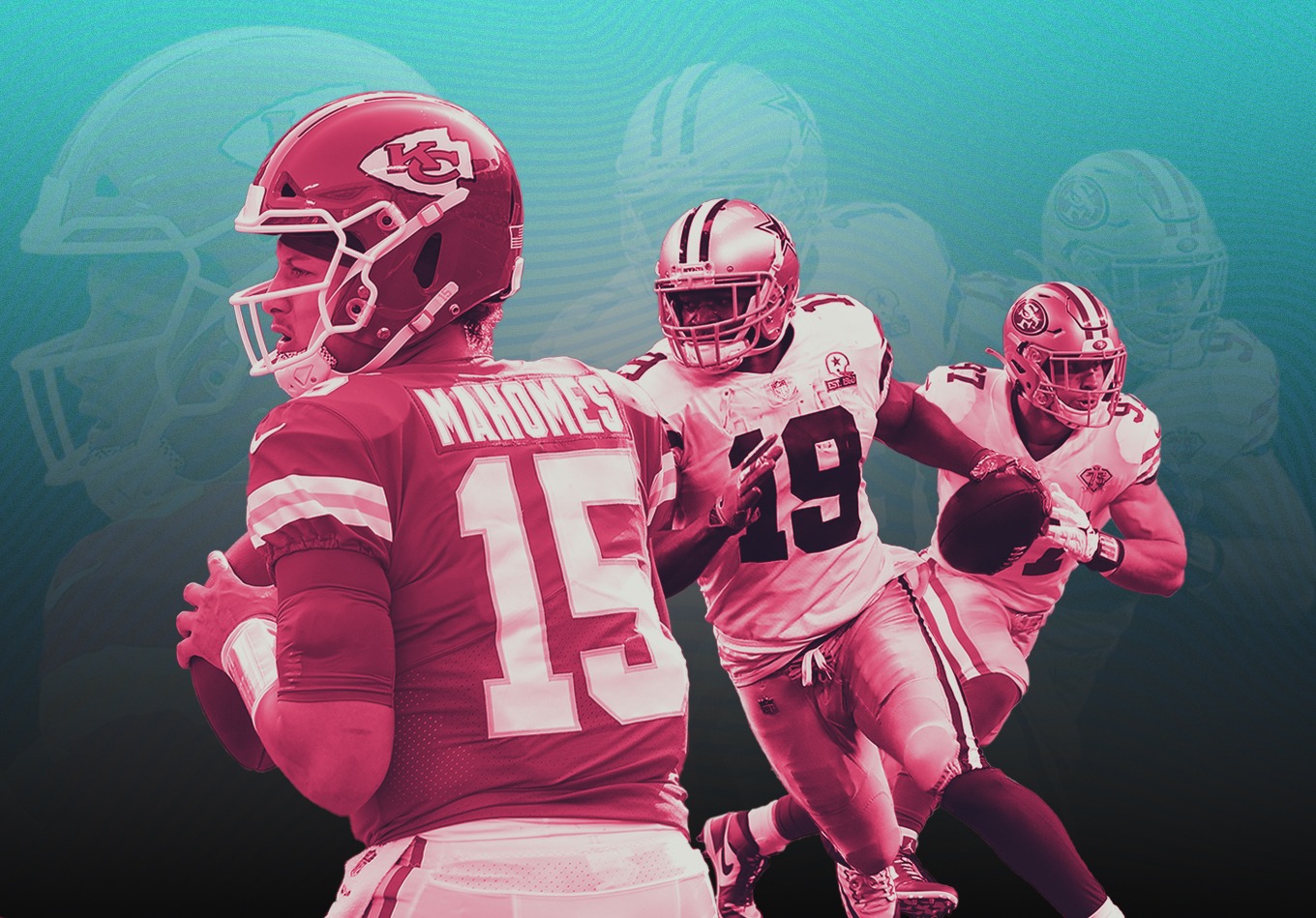 Week 1 of the 2021 NFL season began with a bang and finished with a frenzy.

From the reigning Super Bowl champion Tampa Bay Buccaneers escaping in the final seconds to beat the Dallas Cowboys in last Thursday’s opener to the Las Vegas Raiders rallying for a wild overtime win over the Baltimore Ravens on Monday night, the bookend games of the weekend were exhilarating.

The fact those contests were two of the best shouldn’t be all that surprising, however, given they were among the top four highest-rated games on our Week 1 watchability index, which rates matchups based on their interesting subplots, star power and high probability of being competitive.

The third-ranked game on our index – Cleveland Browns-Kansas City Chiefs – was another thriller, though the one we projected to be a tad bit better – Green Bay Packers-New Orleans Saints – turned out to be a dud. (We think we deserve a pass on that one, though, seeing as our model did not take into consideration that future Hall of Famer and part-time “Jeopardy!” host Aaron Rodgers would forget how to play football a mere seven months after capturing his third NFL MVP Award.)

While Rodgers sputtered his way to a league-low 36.8 passer rating this past weekend, 16 qualifying quarterbacks eclipsed the century mark, including such luminaries as Russell Wilson (152.3) and Patrick Mahomes (131.4), as well as such surprises as Jameis Winston (130.8), Tyrod Taylor (112.1) and Mac Jones (102.6).

As a league, QBs compiled a 99.6 rating – the sixth highest for a single week in NFL history(!) – and that’s even with Rodgers stinking it up.

It will be tough for the quarterbacks this week to top their performances from Week 1, though it shouldn’t be too difficult for Rodgers (and with that, we’re done piling on the Green Bay legend). Week 2 only features three games pitting undefeated teams against one another, and only one of the early battles of unbeatens made our list of what we deem to be the most competitive and watchable of this weekend’s slate.

Reasons to watch: It’s a matchup featuring two teams we believe will take a big step forward this season after finishing last in their respective divisions a year ago. The 49ers and Eagles also put together impressive wins to open the 2021 campaign behind excellent play from their quarterbacks – a position that was a question mark for each team heading into the season. Coming off an injury-plagued 2020 leading to the drafting of Trey Lance, Jimmy Garoppolo completed 17 of 25 passes for 314 yards with a touchdown while posting a 124.2 rating in San Francisco’s 41-33 victory over the Detroit Lions. In Nick Sirianni’s coaching debut for Philadelphia, second-year signal-caller Jalen Hurts completed 77.1% of his 35 throws for 264 yards with three touchdowns and no interceptions for a 126.4 rating in his fifth career start as the Eagles trounced the Atlanta Falcons 32-6.

In addition to Garoppolo being sidelined, another big reason for San Francisco’s 2020 drop-off following a trip to the Super Bowl the year prior, were season-ending injuries to Nick Bosa and Dee Ford within the first two weeks. Playing their first regular-season game together in 364 days this past Sunday, neither showed much rust. Bosa won 46.15% of his 26 rushes on the quarterback and was credited with 11 QB pressures – any play with a full or half sack, hit, hurry or knockdown – second only to Pittsburgh Steelers defensive tackle Cameron Heyward’s 15. Ford won 57.14% of his 14 rushes, had seven pressures, and both he and Bosa each sacked the Lions’ Jared Goff once. The league average for win percentage on one-on-on matchups for edge rushers is 23.5%.

The Eagles’ offensive line was ravaged by injuries last season and surrendered a league-high 65 sacks, but it dominated the line of scrimmage in Atlanta as Hurts was sacked just once. Jordan Mailata and Lane Johnson will be tasked with slowing down Bosa and Ford, and the two Philadelphia tackles more than held their own in Week 1. Mailata won 81.25% of his 16 one-on-one matchups, while Johnson, a three-time Pro Bowler limited to seven games in 2020, won all 21 of his one-on-ones. The league average of win percentage on one-on-one matchups for tackles is 78.5%.

Reasons to watch: The opportunity to gaze upon the beauty that is SoFi Stadium is all the reason you need to tune in. However, if football is your thing, this game should also provide entertainment and keep you engaged between cutaways of the gorgeous home of the Chargers and Rams.

Our models are high on the Cowboys in 2021, and they showed plenty of reason to believe they could be a contender in the NFC as they had the defending Super Bowl champs on the ropes last Thursday before falling 31-29 on Ryan Succop’s 36-yard field goal with two seconds to go. Playing in his first game in 11 months following a gruesome ankle injury sustained in Week 5 of last season, Dak Prescott looked sharp, completing 72.4% of his 58 pass attempts for 403 yards with three touchdowns and one interception. His counterpart for Week 2, the Chargers’ Justin Herbert, also picked up right where he left off from last season. The 2020 Offensive Rookie of the Year passed for 337 yards with a TD and pick in Los Angeles’ 20-16 win over the Washington Football Team.

We get it, that’s broad, but that’s essentially what we’re looking for in this game – can Dallas’ offense keep up with Los Angeles’. With De Marcus Lawrence out with a broken foot suffered in Wednesday’s practice and fellow edge rusher Randy Gregory unlikely to play following a positive test for COVID-19, we don’t see much stopping the Chargers from piling up some points.

Conversely, how will Dallas attack Los Angeles when it has the ball? The Cowboys were one dimensional on offense last week, throwing on 76.6% of their 77 plays – second-highest percentage of pass plays in week 1 behind the Buccaneers at 78.1. Offensive coordinator Kellen Moore wisely opted to avoid dealing with Tampa Bay’s vaunted rush defense with Ezekiel Elliott carrying the ball just 11 times for 33 yards. Now they’ll be going up against a Los Angeles team that allowed a league-low 133 passing yards in Week 1, though that came against Ryan Fitzpatrick and Taylor Heinicke – not exactly the most dangerous arms in the league. Star edge rusher Joey Bosa was part of the reason, compiling a 31.3% pressure rate that ranked fourth in the NFL in Week 1 among those with at least 10 pass rushes.

While the Chargers kept Fitzgerald and Heinicke in check, they were vulnerable against the run – especially on first down. Los Angeles allowed Washington to gain at least four yards on nine of its 12 first-down rushes – and that 75% of opponents’ rushes of four yards or more on first down was tied with the Indianapolis Colts for worst in the league in Week 1. The Cowboys ran a league-low 28.6% of the time on first down in Week 1 (10 of 35), and you can expect Elliott to be much more involved in the offense this time around, especially with six-time Pro Bowl guard Zack Martin back after he missed the opener after testing positive for COVID-19.

Reasons to watch: You’ll have been waiting all day for this Sunday night showdown between two of the AFC’s best teams and two of the league’s top quarterbacks. The five-time defending AFC West champion Chiefs needed to rally from a 22-10 halftime deficit in their 33-29 comeback win over the Cleveland Browns last weekend, while the Ravens blew a 14-0 second-quarter advantage and three fourth-quarter leads in falling to the Raiders 33-27 in overtime on Monday night.

This will be the fourth straight season these teams square off, with the Chiefs winning each of the last three. Patrick Mahomes has got the better of Lamar Jackson in the head-to-head matchups, completing 70.5% of his passes for 1,136 yards with nine touchdowns to one interception, compared to Jackson completing 52.6% of his throws for 511 yards with three TDs and no picks. He’s also rushed for 196 yards and another score.

This will be the 48th career game for both the 2018 and 2019 MVPs, and Mahomes’ QB ratings in the last two matchups (133.5 in 2020 and 132.0 in 2019) are two of the five highest single-game ratings in any regular-season game in his career. The sixth-highest regular-season QB rating for Mahomes? Well, that came last Sunday, when he threw for 337 yards with three touchdowns and no interceptions to register a 131.4 rating.

Jackson, who had 73.1 and 70.6 ratings in Baltimore’s last two games against Kansas City, shouldered much of the offensive load against Las Vegas with the backfield beset by injuries. Jackson threw for 235 yards with a TD and rushed for 86 yards, but also lost two fumbles – including one in OT to set up the Raiders’ winning score.

The Ravens have had no answer for Mahomes in the past, and they’ll have to clean up a lot during their short week after their meltdown on Monday. Baltimore allowed 409 passing yards – its most in a game since 2017 – and although 101 of those yards through the air came after regulation, the secondary looked susceptible most of the night. The Ravens allowed seven passing plays of 20 yards or more last week – the most surrendered by any team in Week 1.

That doesn’t bode particularly well considering Tyreek Hill’s four receptions of at least 20 yards were the most of any player last weekend. Hill took advantage of single coverage against the Browns, accounting for 10 burns – when a receiver wins his matchup on a play where he is targeted – and was on the receiving end of Mahomes’ deep throws, with a Week-1 high 150 yards at the catch.