NFC Win Projections: Can the Vikings Spoil the Last Dance in Green Bay? | The Analyst 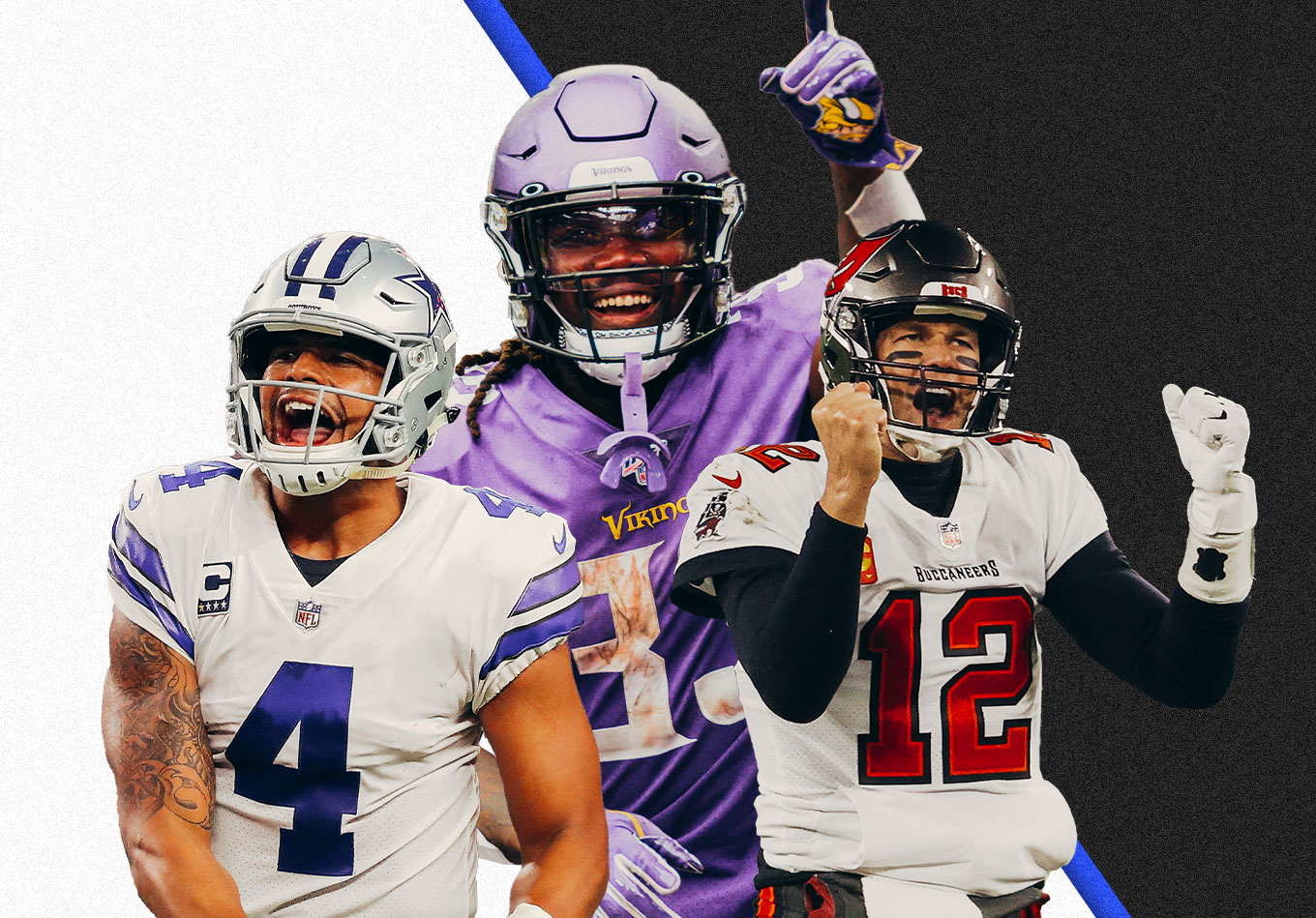 NFC Win Projections: Can the Vikings Spoil the Last Dance in Green Bay?

Aaron Rodgers is back with something to prove after ending his dispute with the Green Bay Packers. And his favorite target, Davante Adams, should be motivated to put up big numbers in the final year of his deal with the team.

It figures to add up to a special season in what some are calling the tandem’s “last dance” with the franchise, right?

Not according to our 2021 win projection model, which has calculated that the Minnesota Vikings should be poised to upend the two-time defending division champs and claim the NFC North crown.

After that, a win percentage is created for each game based on aggregated team ratings and those eight weighted team components. Remember that because of the way the NFL puts together its schedule, it’s hard for teams that finish first in their division to pile up wins again the following year.

These projected win totals are the average wins that come as a result of our season simulations. (Obviously, we know that finishing with 10.6 wins is impossible.)

First, let’s start with those Vikings in the NFC North, which we rate as the fourth-best division in the conference and seventh-best overall. Note: The strength of schedule ranking is across the entire NFL.

We think the Vikings should be much improved in 2021. They found a real star in Justin Jefferson, who gives them more than just Dalvin Cook and opens up the offense while creating more one-on-one matchups for Adam Thielen. The offensive line remains a disaster and they need Christian Darrisaw to get healthy as soon as possible. The defensive line is where the team will be most improved. They get Danielle Hunter and Michael Pierce back from injury and an opt-out, respectively, while also adding run-stuffing monster Dalvin Tomlinson to the mix. The defensive line was a mess in 2020 and replacing three starters with game-changers is the biggest reason they’re projected to have a better season.

The Packers need David Bakhtiari to get healthy as soon as possible. Elgton Jenkins is a star and will be a high-level replacement for D-Bak until he’s back, but sliding him out to tackle makes the interior weaker. With changes at both guard spots and center, there are a lot of questions for this offensive line. If the new players currently occupying those spots perform, the offense will be as good or better than last year, but that’s a lot to ask. The defense should be as good as it was last year and could be better if the pass rush returns to its 2019 form.

The pass rush and run defense will still be good. The rest of the team is littered with question marks. After moving on from Kyle Fuller, the starting corners are currently Jaylon Johnson, Duke Shelley and Kindle Vildor. Johnson performed well in 2020, but Vildor and Shelley both played limited snaps with mixed results. The offense will likely depend on how quickly the team moves to Justin Fields. The offensive line has the potential to be a disaster and the pass-catching group still has a lot to prove. Combine all the questions with a tough schedule and it could be an ugly year in Chicago.

This is a team in a full rebuild. They’ll be physical in the trenches under new coach Dan “we’ll bite a kneecap off” Campbell, but this is really a year for a new regime to figure out what they have on the roster. Jeff Okudah was bad last year, but he dealt with several nagging injuries and could take a step forward in his second year.

We rank the NFC East as the best division in the NFC and second-best overall. And with Dak Prescott and the entire offensive line back to start 2021, the Cowboys should be one of the best teams in football. Their offense is absolutely loaded with talent. CeeDee Lamb looks like one of the best young receivers in football, Amari Cooper is still great and Michael Gallup can take the top off of any defense. They also have a dynamic running back duo, but the health of the offensive line will be the key to the season. If Tyron Smith and La’el Collins can stay healthy, this offense may have some record numbers. Defensively there are a lot of questions, but it should still be an above-average defense. We’re very excited to see how Micah Parsons is used.

The Eagles will be good because of how they play in the trenches. The offensive line is great, as usual, and the defensive line is maybe the best and deepest in the league. They are first overall in our projected pressure rate, led by veterans Brandon Graham and Fletcher Cox. The offense could really be anything, but they’ll have options behind a stellar offensive line.

A rough schedule will make 2021 a difficult year for Washington. Its defense will be the breadwinners, with a loaded front seven and a pass defense with some questions but also some high upside. Offensively, they have a lot of weapons and they’ll need them to produce to find wins on their schedule. Washington has an eight-week stretch (at Buffalo, at Atlanta, New Orleans, Kansas City, at Packers, at Broncos, BYE, Buccaneers) that might be the toughest for any team in the league.

There isn’t much to be excited about here. The offensive line has not been fixed and while they do get Saquon Barkley back and have added Kenny Golladay, Daniel Jones will still need protection to find them. The defense is fine, but it’s lacking a pass rush. If Azeez Olujari can be a difference-maker as a pass rusher, the outlook improves a little, but that would give them one good edge rusher when they really need two to make this defense function.

Not much to say about the Bucs, who headline the third-ranked division in the NFC and fifth overall. They return everyone from last year’s Super Bowl winners and even added a little bit of depth. They have so many weapons, an excellent offensive line and a great pass rush. The secondary would be the only concern, but with so much youth on the back end, they could be even better.

Sean Payton has never had an offense finish outside of the top 10 in points and 2021 won’t be the first year. Despite a big change at quarterback and a receiving group without a household name, the outlook for this team remains strong. There’s a lot to like about Marquez Callaway and he’ll be a name everyone knows at the end of the year. The offensive line is still among the best in football and Alvin Kamara remains a dynamic option on offense. The defense has more question marks than it did a year ago, especially with the suspension of David Onyemata. Marcus Lattimore and Marcus Davenport need to stay healthy to keep this defense from cracking.

The Falcons should be much better than they were in a four-win 2020 campaign. Their offensive line still has some holes on the interior, but the pass-catchers were already intriguing before adding Kyle Pitts. The defense will be what puts the Falcons in the playoffs or keeps them out. Defensive tackle Grady Jarrett is a star, but the rest of the defensive line isn’t exciting. The secondary could go any number of ways and strong development from the youth they have at corner would be a welcome occurrence in 2021.

The return of Christian McCaffrey is a welcome addition to this offense, but we’ll have to see a lot from Sam Darnold before we can buy in. The offensive line is still a massive question mark and while the offensive weapons available are intriguing, Darnold will have to get the ball out quick. Defensively, the Panthers will be looking for continued development from Brian Burns, who could be a star if he adds a few more moves. Derrick Brown should be even better on the defensive interior, Jordan Chunn is a fun piece to move around and Jaycee Horn could be good right out of the gates. If Horn struggles, the pass defense is going to struggle, and without a consistent pass rush to get home, the defense could be in trouble.

This projection is made with an even split of Jimmy Garoppolo and Trey Lance taking snaps during the season. With either, the outlook for one of the most injured teams in football in 2020 is strong. This division, ranked second best in the NFC and third best overall, could really see any order, but our projections put the 49ers narrowly on top. The offensive line has gotten better with the addition of Alex Mack, and Nick Bosa is back after a year of injury. Barring another year of brutal injuries, the team should be better at almost every position. The biggest question is who plays opposite Jason Verrett, who was incredible in 2020. However, teams could avoid him entirely if the corner on the other side isn’t up to the task.

Matthew Stafford could unlock rooms full of play calling from Sean McVay. The Rams added Tutu Atwell and DeSean Jackson as downfield threats and Sony Michel, who our models love, in a trade with the New England Patriots after some injuries decimated the running back room. The offensive line has some issues, but McVay’s system helps them out a lot. The defense should still be strong; Aaron Donald is the best player in football and Jalen Ramsey may be the best defensive back in football.

The Rodney Hudson trade was a big move. The center position has been a nightmare in Arizona for years and Hudson is among the best in the league. He should make the line better as a whole, which is something this offense needs. J.J. Watt isn’t what he was a few years ago, but he’s still one of the most productive defensive ends in the league. The big questions with this team have to do with whether Kliff Kingsbury can get the most out of the pieces available to him and how the cornerbacks perform.

It seems like our models are always down on the Seahawks and then Russell Wilson goes 6-1 in one-score games. In 2021, we have them finishing last in the division – but just 1.5 wins behind the first-place team. In other words, they have almost the same chance of finishing first in this division and last in this balanced division. The offense will be just fine, but there are concerns on the defensive side of the ball. The defensive line is a patchwork of players without a significant game-changer and their best pass rusher is probably safety Jamal Adams. Tre Flowers and D.J. Reed are the projected starters at corner, but Flowers has not been very good in his career and Reed is a career special teamer who was decent in 2020.