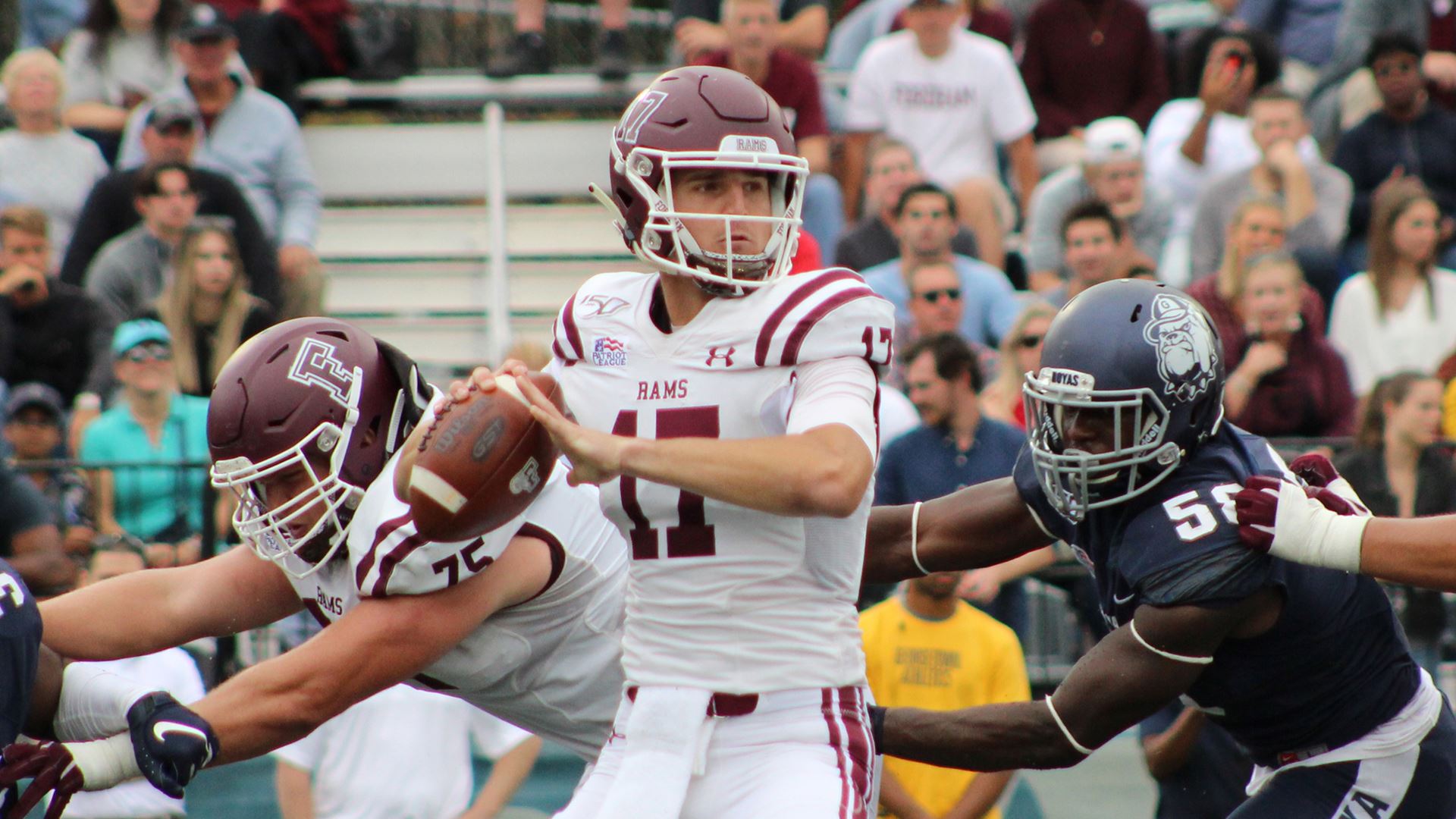 Reigning Patriot League coach of the year Dave Cecchini made perhaps the most noteworthy comment during the league’s virtual preseason media day, calling Fordham the class of the league entering the 2021 season.

He may be correct about Fordham, but the favorite in the league’s preseason poll was Holy Cross, which has won the last two Patriot titles, including with a win over Bucknell in a one-time league championship game during the pandemic-delayed 2020 season that was played in the spring.

The fun part will come in finding out if Cecchini is correct. The Patriot League is ready for a full season again, and with Georgetown back on the field after being the lone program to sit out the spring schedule.

Here’s a preview of the upcoming Patriot League season:

3. Lafayette (2-1, 2-1) – The defense is stacked in the front seven with Malik Hamm and Damon Washington up front and Marco Olivas flying around at linebacker. The offense is starting over again at quarterback, but tight end Steven Stilianos (four TD catches in three spring games) will be a nice target for the new starter.

4. Colgate (0-2, 0-2) – New coach Stan Dakosty was a part of seven of Colgate’s 10 all-time league titles as an assistant. Quarterback Grant Breneman, a fifth-year starter, has been around long enough that it may seem like he founded the university. He’s accounted for 6,216 yards of total offense and 45 total touchdowns in his career.

5. Bucknell (2-2, 2-1) – Long known for their physical defense, the Bison return only three starters on that side of the ball, although defensive back Gavin Pringle (two interceptions and 11 pass breakups in 15 games) is usually around the ball. Quarterback Tarrin Earle can distribute the ball to running backs Jared Cooper and Coleman Bennett and wide receiver Dominic Lyles, whose 31 receptions and 291 receiving yards were league highs in the spring season.

6. Georgetown (2019: 5-6, 1-5) – While the Hoyas have only one winning season since 1999 (8-3 in 2011), they’ve gone 5-6 in each of their last two campaigns, and they return 11 starters from the 2019 squad (six on offense and five on defense). Mark Brunell’s quarterback son Joseph should be solid, and his running backs, Herman Moultrie III and Joshua Stakely, will form a nice tag-team. Safety Ahmad Wilson is a defensive anchor.

7. Lehigh (0-3, 0-3), 35 – The Mountain Hawks, who managed only 16 points in three spring games, are a fairly young team with only 11 seniors. One of them, Rashawn Hill, combines with junior Zaythan Hill (94-yard TD run in 2019) for a solid running back duo. Linebacker Pete Haffner (186 career tackles) anchors the defense, which limited opponents to 252.7 yards and 15.3 points per game in the spring to rank first in the league.

Fordham quarterback Tim DeMorat – The 6-foot-4 height isn’t the only thing that towers over the competition. DeMorat led the FCS in completion percentage (72.1) during the 2020-21 season and averaged 349.7 passing yards in the three spring games.

Lafayette defensive end Malik Hamm – With explosive speed around the edge, the 6-3, 260-pound Hamm is unstoppable in the Patriot League. He has at least one tackle for loss in his last 10 league games and in 14 of 15 overall (the exception came against Holy Cross in 2018). It’s added up to 30.5 TFLs and 18 sacks in 26 career games.

The Patriot League has been the lowest-scoring conference in the FCS for four straight seasons, with teams averaging 18.3 points per game this past spring. No offense is going to match Fordham’s firepower, but the other teams need to make a jump.

Colgate vs. Holy Cross (Oct. 23) – This will be the first college football game at Polar Park, home of the Boston Red Sox’s Triple-A team in Worcester, Massachusetts.

Holy Cross at Fordham (Nov. 13) – The annual Ram-Crusader Cup is on the line, and the league title and FCS playoff bid surely will be as well.

Lafayette at Lehigh (Nov. 20) – A high noon kickoff is appropriate for the most-played series in college football. Lafayette will take an 80-71-5 lead into the 157th meeting.