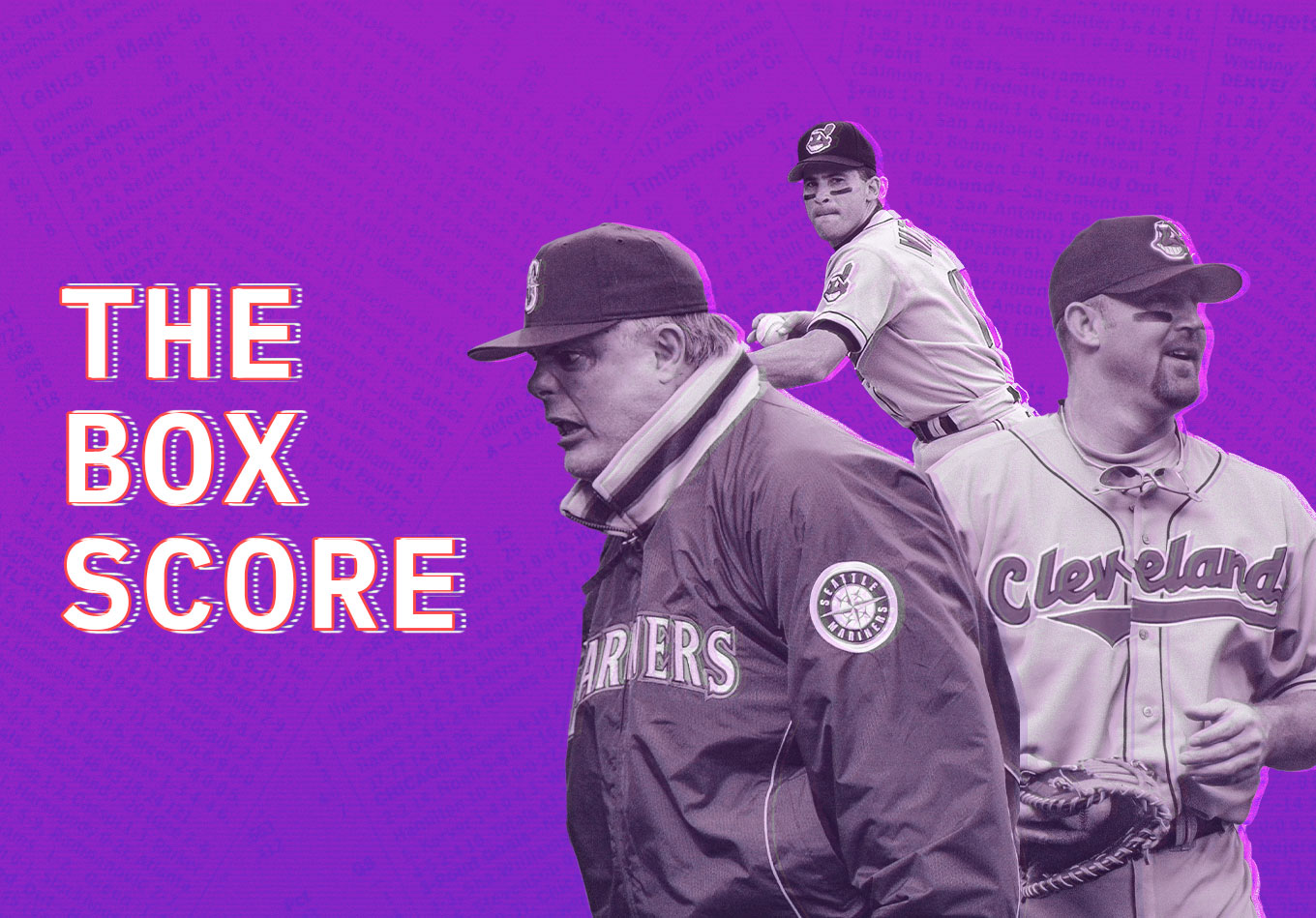 It’s a story as old as the tortoise and the hare, and there’s never been a better illustration that there’s no game clock in baseball. Or, as noted philosopher Yogi Berra once observed, “It ain’t over ’til it’s over.”

But did Berra really believe his words? What if a team held a 12-0 lead after three innings, and then led by 14-2 through six innings? Oh, and if the team with that sort of lead happened to be the best in baseball, and would finish that season tying MLB’s all-time record of 116 wins in a single season? What’cha gonna say now, Yog? Wouldn’t you consider a game like that to be “over”?

Well, no. Twenty years ago this summer, the Seattle Mariners proved the point. Or should it be said that the Cleveland Indians proved it? Whichever, on Aug. 5, 2001, the Mariners ran off to those huge early leads in a nationally televised Sunday night game in Cleveland, to the point where both teams started removing multiple star players from the lineup – the timeworn telltale sign that while not claiming victory or conceding, each team’s manager, well, knows what the score is. This lead was so big that the mercy rule would have applied in certain youth or high school games.

That Seattle team was somehow still stacked. Yes, the previous two offseasons, it had lost a pair of players that could have been considered the best in baseball at the time. Center fielder Ken Griffey, Jr., heading into the final year of his contract, was traded to his hometown team, the Cincinnati Reds, following the 1999 season. And shortstop Alex Rodriguez signed with the Texas Rangers for big free-agent money after the 2000 season. But manager Lou Piniella’s squad still included Edgar Martinez, John Olerud and Bret Boone, and they were joined for the 2001 season by outfielder Ichiro Suzuki, the seven-time batting champion and three-time MVP of Japan’s Pacific League. All Ichiro did in his first year stateside was win the American League’s Rookie Of The Year and Most Valuable Player Awards, and earn a Gold Glove.

When they woke up that Sunday morning in Cleveland, the determined Mariners owned an 80-30 record and already held a 20-game lead over second-place Oakland (60-50) in the AL West. The Indians, meanwhile, were a decent team, fighting the Twins for the AL Central lead. Cleveland would eventually win that battle and take the division by a six-game margin, and then take the Mariners to the limit before dropping a best-of-five Division Series.

Knowing that might have made what we’re about to discuss easier on Sweet Lou and Co.

The Mariners reached Indians starter Dave Burba for four runs in the second inning, with Ichiro driving home a pair. They routed Burba in the next inning, and then turned up the heat against reliever Mike Bacsik, making his big-league debut. By the time that the third out was recorded, eight more runs had scored on seven hits (two by Olerud) and an error by the usually flawless Cleveland shortstop Omar Vizquel. Seattle starter Aaron Sele went out to pitch the last of the third possessing a 12-0 lead.

Jim Thome’s two-run homer put Charlie Manuel’s team on the board in the fourth inning, but Seattle responded with a pair in the fifth to restore its 12-run lead. And so things moved into the last of the seventh, by which time Ichiro, Martinez and Olerud had been withdrawn from the lopsided contest. Not to be outdone, Manuel had taken out four of his starters, including his No. 3 and 4 hitters, Robbie Alomar and Juan Gonzalez.

Don’t Call It a Comeback – Yet

Russell Branyan, one of the mid-game replacements, homered to start Cleveland’s seventh, but two quick outs followed. Mind you: The Mariners now held an 11-run lead with seven outs to go and the bases clear. Even Yogi might have dozed off. But after a single and a pair of walks, Sele gave way to John Halama, who promptly yielded a two-run single to Alomar’s replacement, Jolbert Cabrera. No sweat. Halama retired the next guy and it stood at 14-5 heading into the eighth.

Bacsik pitched a scoreless eighth – who would have thought he’d last six innings after that extremely rocky debut? Nevertheless, he allowed seven runs in six innings after starter Dave Burba was charged with seven of his own. It’s the only time in the modern era that a team has won a game despite having two pitchers each allow seven or more runs.

Just as Branyan had done in the seventh, Thome started the eighth with a homer, his second of the game. Then Branyan was hit by a pitch and Marty Cordova homered. Now it was 14-8. A groundout was followed by a pair of hits and a pitching change, as Piniella waved in Norm Charlton, then in his final big-league season. The lefty had been one of Lou’s bullpen mainstays, nicknamed “The Nasty Boys,” during the Reds’ remarkable run to the 1990 world championship. Vizquel greeted him with a double, making it 14-9, with runners on second and third and just one out. The remaining portion of the original crowd of 42,494 was on its feet, in full throat, someone surely uttering the phrase, ‘The comeback starts now,’ seven runs too late.

However, here came one of those plays that snuffs out a rally in an instant. On a 1-1 pitch, Cabrera swung and missed at a Charlton vestigial slider and after the ball bounced away from catcher Tom Lampkin, the runner on third, Kenny Lofton, belatedly dashed for the plate. Lampkin retrieved the ball quickly and flipped it to Charlton; Lofton, with his team down five runs, was tagged out at home. An absolutely horrible baserunning play, one that seemed to squelch any dreams of a Cleveland comeback, by a player generally considered one of the smartest in the game. Cabrera then struck out to end the inning.

The Comeback of the Century

Rich Rodriguez threw a 1-2-3 top of the ninth against a Mariners lineup that still probably didn’t feel overly obligated to reach base. And though Eddie Taubensee singled to open the home half, Charlton retired the next two hitters.

With a five-run lead and one man on base, Seattle stood one out from victory. But Cordova stroked a double, convincing Piniella to bring in one of his relief aces, Jeff Nelson. Wil Cordero reached a full count and then walked, filling the bases, and Einar Diaz kept things moving with a single to left, sending home two runs. Cleveland now trailed 14-11 with the potential tying run coming to bat.

Kazuhiro Sasaki, who would finish the season with 45 saves, replaced Nelson. Lofton, looking for redemption after his blunder of some 20 minutes earlier, punched a single to left, loading the bases for Vizquel. The count again went full, and the next two pitches were fouled off. Then Vizquel pulled a sharp grounder between substitute first baseman Ed Sprague and the line, and as the ball rolled to the right-field corner, all three baserunners scored. It’s interesting to note here that Sprague had replaced Olerud, an accomplished defensive first baseman who might have guarded the line and gobbled up Vizquel’s grounder for the final out.

It was MLB’s first ninth-inning, game-tying, two-out, three-run triple since Barry Bonds had delivered one for the Pirates in 1992. Remarkably, Bonds produced that big blow on a Sunday game in Ohio, against the Reds, managed by Piniella, and off Charlton, no less!

With the would-be winning run 90 feet away, Sasaki then battled back from a 3-0 count to retire Cabrera, sending the game into extra innings tied at 14. No MLB game had headed for the 10th inning with so many runs having been scored in 22 years, since the Chicago Cubs and Philadelphia Phillies had gone to the 10th tied 22-22 in 1979. The Phillies won that one 23-22 on Mike Schmidt’s 10th-inning homer.

““We have seen a historic game tonight, and not many people who are still living have ever seen anything like this,” says Jon Miller from the booth.

He still didn’t know which way it would go.

Following a scoreless 10th, Cleveland’s John Rocker came in for the 11th and struck out the side. In the bottom half, Lofton and Vizquel reached Jose Paniagua, Seattle’s last available reliever, for a pair of one-out singles. Then Cabrera, swinging at the first pitch, blooped a broken-bat hit into left, and Lofton raced around with the game-winning run. The Indians, after trailing by 12-0 and 14-2, had come back to win 15-14. And there it was, proof positive. It ain’t over ’til it’s over.

Cleveland had tied the Major League record for the largest deficit overcome in a victory. Only twice previously in MLB’s 126-year history had a winning team rebounded from a 12-run deficit, with the last such instance happening 76 years earlier, when Connie Mack’s Philadelphia Athletics did it against the Indians in 1925. Ty Cobb’s Detroit Tigers had won a game over the Chicago White Sox in a similar manner in 1911.

The Mariners, shocked as they were, came back, defeated the Indians the next night and flew back home having taken three of the four games in Cleveland. At season’s end, though, the significance of the August 5 loss loomed large, as Seattle finished with a record of 116-46, equaling but not exceeding the Major League record for wins in a season that had been set by the Cubs in 1906. Those Cubs played a shorter schedule, and finished with 116 wins against only 36 losses.

Neither the 1906 Cubs nor the 2001 Mariners finished off their spectacular season by winning the World Series. The Cubs were beaten by the crosstown White Sox, a team so weak at the plate that it earned the nickname of “Hitless Wonders” in a six-game series. After beating the Indians in the Division Series despite having trailed 2-1, the Mariners dropped four of five to the Yankees in the ALCS.

But that August night in Cleveland still shines bright in the memories of all who witnessed it, either in person or on television. Something astounding happened that had not been done in 76 years, and that hasn’t been done in the 20 years since.

Catch up on a previous box score or two.