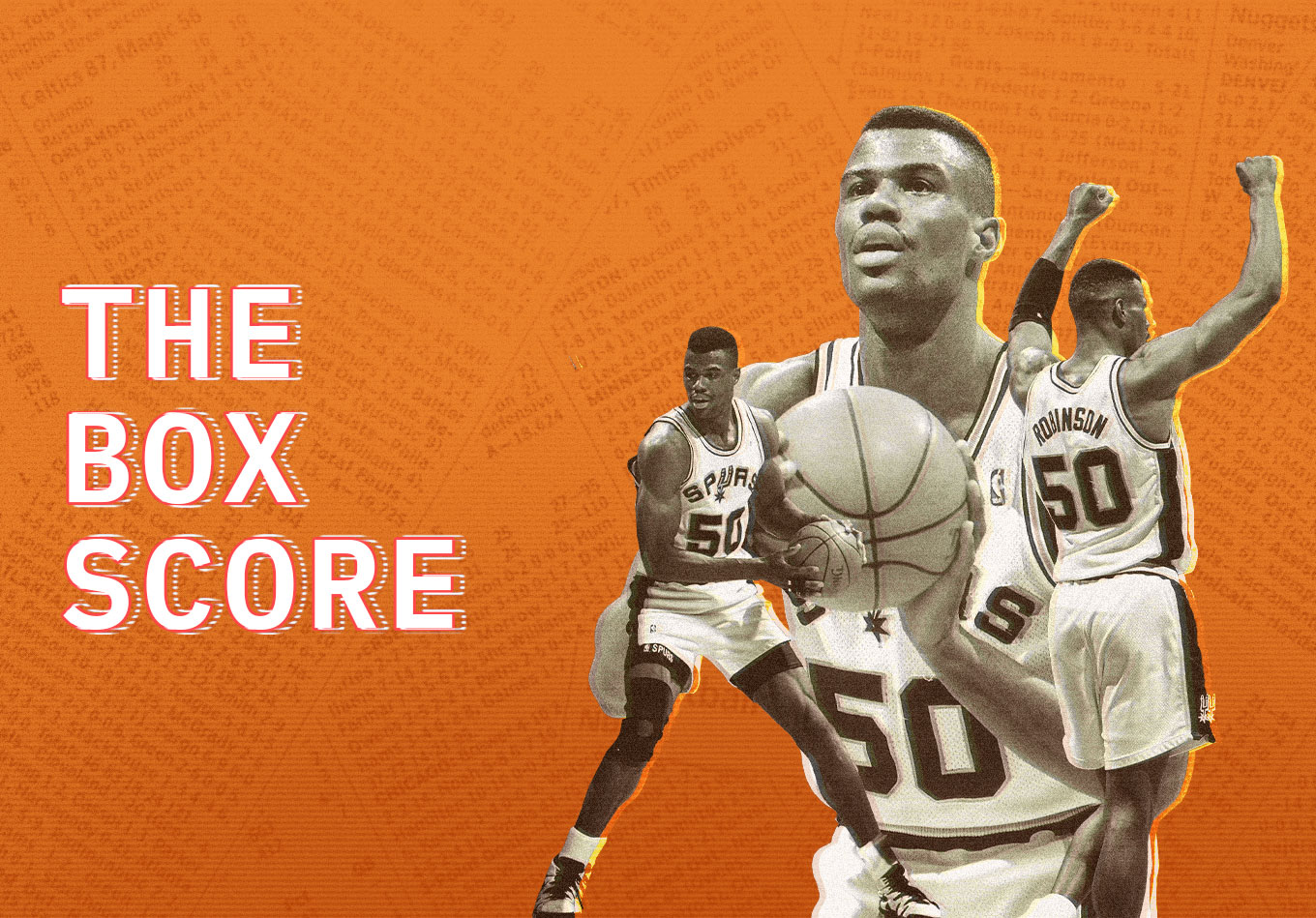 It was Feb. 17, 1994. San Antonio, Texas. Fourth quarter of a Spurs-Pistons regular-season game. “I’ll tell you what folks, get a look at that because I don’t know if you’ll see that again this year or for a few years.”

A few years? What NBA Hall-of-Famer David Robinson accomplished that random Thursday in February hasn’t happened in 27 years since.

That night, the 36-14 San Antonio Spurs were hosting the 12-37 Detroit Pistons. Facing Hall of Fame point guard Isiah Thomas in his final NBA season, Robinson dominated the Pistons on his way to 34 points, 10 rebounds, 10 assists and 10 blocks for just the fourth officially recorded quadruple double in NBA history.

In an era of NBA basketball where triple doubles have skyrocketed – there were 115 in 2018-19, the NBA’s last full regular season, and 36 in 1993-94 – the quadruple double has seemingly become…even rarer. Nate Thurmond accomplished one for the Bulls in 1974, Alvin Robertson for the Spurs in 1986, and Hakeem Olajuwon did it for the Rockets in 1990.

However, the most monster performance of them all was none other than the Admiral’s 4×10 in 1994, which was also the last time anybody accomplished this feat — and not many players have come close since.

Most notably, Golden State Warriors star Draymond Green recorded the first-ever triple double without points as a contributing category, finishing with 12 rebounds, 10 assists and 10 steals in a win over the Memphis Grizzlies on February 10, 2017. Green finished with four points and actually came slightly closer to the quadruple double with his five blocks.

Then there was Feb. 18, 1985. Larry Bird had 30 points, 12 rebounds, 10 assists, and 9 steals in 33 minutes. Bird sat out the entire fourth quarter. After three quarters, head coach K.C. Jones informed Bird that he was one steal away from a quadruple double and asked if he wanted to stay in the game. Bird declined, saying that he “already did enough damage.” Legend.

A season after Bird, Clyde Drexler had 26 points, 11 assists, 10 steals and nine rebounds for the Trail Blazers. He also had seven turnovers and they lost to the Bucks. But more than a decade later on November 1, 1996, Drexler was playing for the Rockets. He fell one assist short, recording a stat line of 25 points, 10 rebounds 10 steals and nine assists against the Kings. And there’s some controversy with this one surrounding an assist he wasn’t credited for on a Matt Maloney layup. Which, if you go back and watch the tape of that game, looks not unlike a fastbreak assist.

And perhaps even more impressive is how close Shaquille O’Neal and Tim Duncan got to recording quadruple doubles in the NBA Finals.

But that’s the beauty of a somewhat arbitrary stat like quadruple doubles — “so close” doesn’t get you any brownie points. There’s such a thing as three quarters of a quadruple double: it’s called a triple double.

Back to that historic day in February of ’94. Facing an undersized Pistons frontcourt featuring no player taller than 6-foot-10, the 7-foot-1 athletic demigod Robinson was a wrecking ball on both sides of the court. Due to their lack of size, the Pistons were forced to double team Robinson whenever he caught the ball near his patented high post, and he was able to continuously find the open man – a major reason why he was able to pile up 10 assists and a 10-to-1 assist to turnover ratio for the game.

And when Pistons head coach Don Chaney realized this double team strategy wasn’t working and the Pistons reverted back to playing traditional man-to-man defense, Robinson lit up the scoreboard by himself and was unstoppable as a scorer.

What’s truly incredible about this performance from Robinson is that it came in the middle of one of the greatest two-week stretches of his career. He averaged 33.3 points, 10.6 rebounds, 7.1 assists, 5.6 blocks and 2.3 steals. Two games after the quad, he scored 50 on the Timberwolves.

Equally as absurd is how good the Spurs were in the middle of the 1994 season. This victory over the Pistons was the 11th win of a 13-game winning streak for head coach John Lucas II’s squad and was a part of a larger 24-3 stretch from Christmas to Feb. 21.

For context, it was the third-longest winning streak of Robinson’s career, and after Robinson retired, the Gregg Popovich and Tim Duncan Spurs only had three 13-game win streaks and only ever won 24 games in a 27-game stretch twice in 13 years.

The winning streak was in large part thanks to Robinson. 1993-94 was perhaps Robinson’s best statistical season in the NBA, as he averaged career highs in points per game (29.8, which led the league that year) and assists per game (4.8), and while his rebounding took a slight hit due to playing with Dennis Rodman (more on that below), he still averaged a respectable 10.7 rebounds per game to go along with elite marks in steals (1.7) and blocks (3.3) per game – all while playing a career-high 40.5 minutes per game.

An underrated storyline from this game was that it was just the second game that Dennis Rodman and Sean Elliott played against each other and their old teams after being traded for each other the previous offseason.

Elliott had exactly 20 points in both games for the Pistons, while Rodman had a monster game this time around playing alongside Robinson for the Spurs, going off for 22 rebounds and one point on one field-goal attempt. Very Worm-like, and it makes it all that much more impressive that Robinson was able to reach double-digit rebounds that night given how glued to the glass Rodman was.

Rodman would play one more season with the Spurs before being traded to the Chicago Bulls in October 1995, while Elliott would be traded right back to the Spurs at the end of the 1994 season, where he would finish his Spurs career as the franchise’s eighth all-time leading scorer (as of 2021).

But back to Robinson – and his fellow quadruple-doublers Thurmond, Robertson, Olajuwon and one other we haven’t yet mentioned.

Hakeem “The Dream” Olajuwon had a few stat lines in his career that most players could only, well, dream of.

There’s the quadruple double on March 29, 1990, when Olajuwon dominated the Milwaukee Bucks on his way to recording 18 points, 16 rebounds, 10 assists and 11 blocks. Then there’s the game just 26 days earlier, when he finished with 29 points, 18 rebounds, nine assists and 11 blocks in a win over the Golden State Warriors. After the game, the Rockets reviewed the game tape and attempted to claim an unaccounted for assist that Olajuwon should’ve had, but the NBA denied the request.

Olajuwon is also the closest to ever come close to recording a quintuple double. On March 10, 1987 against the Seattle Supersonics, Olajuwon recorded – get ready for this – 38 points, 17 rebounds, 12 blocks, seven steals and six assists.

While the Navy product Robinson didn’t record any personal career highs in this game, he did accomplish a few other notable feats aside from the obvious quadruple double. He blocked 10 shots while only picking up one foul, which has only happened 14 times in NBA history. Robinson accounts for an NBA-record three of those games.

Thurmond, the owner of the first-ever officially recorded quadruple double, once said “the reason why [the quadruple double] is such a hard thing to accomplish is because it requires a player to be completely dominant on both ends of the court without being too selfish — so he can get the assists — and without fouling out trying to block every shot or grab every rebound. A lot of guys can get the points, rebounds and assists, but it’s the defensive stuff that messes everybody up. You have to love defense to get a quadruple double. There’s no way around it.”

That certainly applies to a current player. Outside of the NBA, this is a little more common, particularly in the women’s game. Most notably and most recently, Grambling State’s Shakyla Hill did it in consecutive seasons at for The Tigers. The first time she did it, she snuck into the club with 15 points, 10 rebounds, 10 assists and 10 steals. The second time, she made it a bit more comfortably going for 21 points, 16 rebounds, 13 assists and 10 steals in 32 minutes. Then, after going undrafted in the WNBA, she went and did it again in the Serbian league. So she’s had quadruple doubles in three straight basketball seasons.

Perhaps the craziest parts of Robinson’s performance is his coach said it could have easily been even better.

After the game, Lucas said “We didn’t even talk about the winning streak. We did talk about David’s quadruple double. He was just great. But I was mad at him. He missed seven free throws and he should have had 41 points.”

A 40-point quadruple double? Talk about something that “I don’t know if you’ll see again, folks.”

And right up there with that is how wild it is that, historically, this often isn’t the game people remember from Robinson that season – and by people, we mean Shaq.

On April 23, 1994, Shaq narrowly led Robinson in points per game for the season. On April 24, Robinson ended the regular season with a career-high 71-point performance, which allowed him to overtake Shaq for the scoring title. 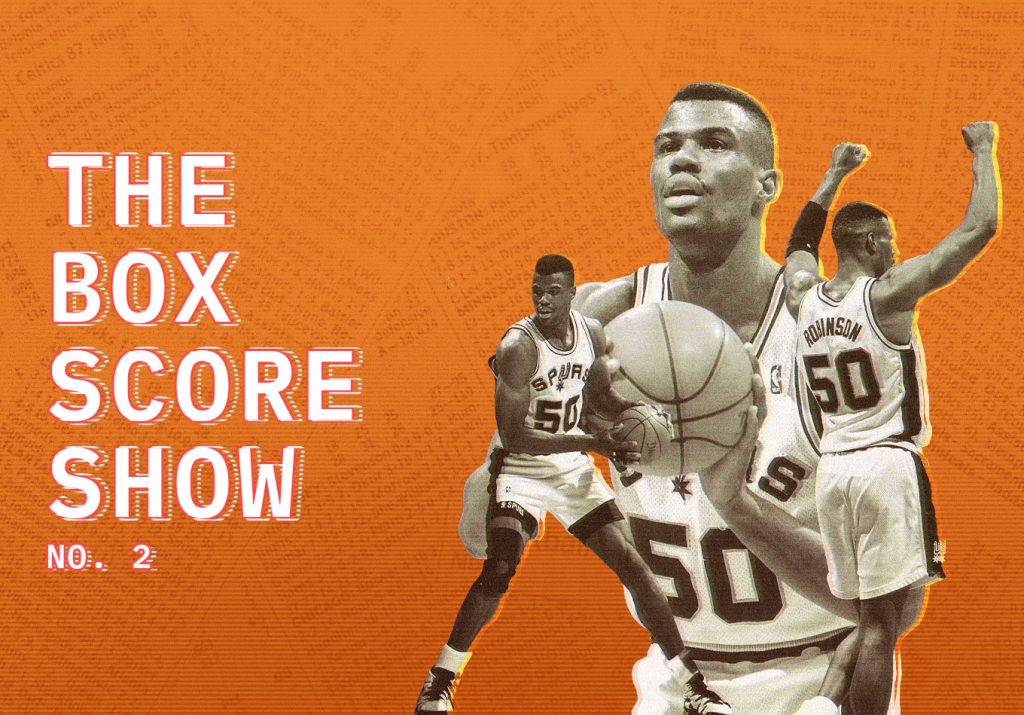 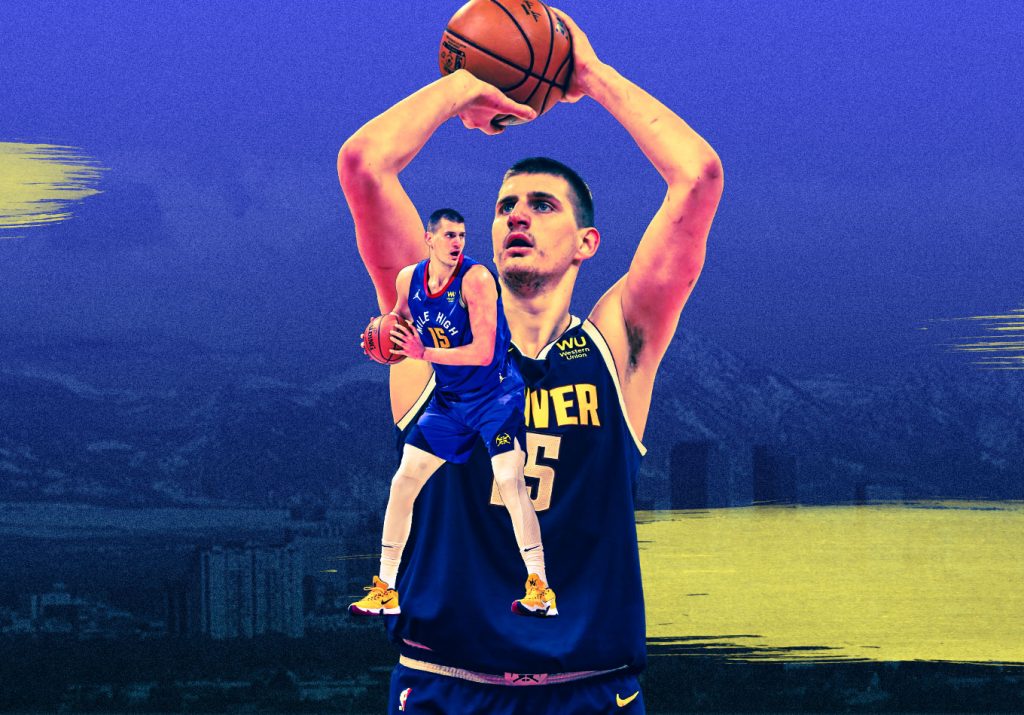 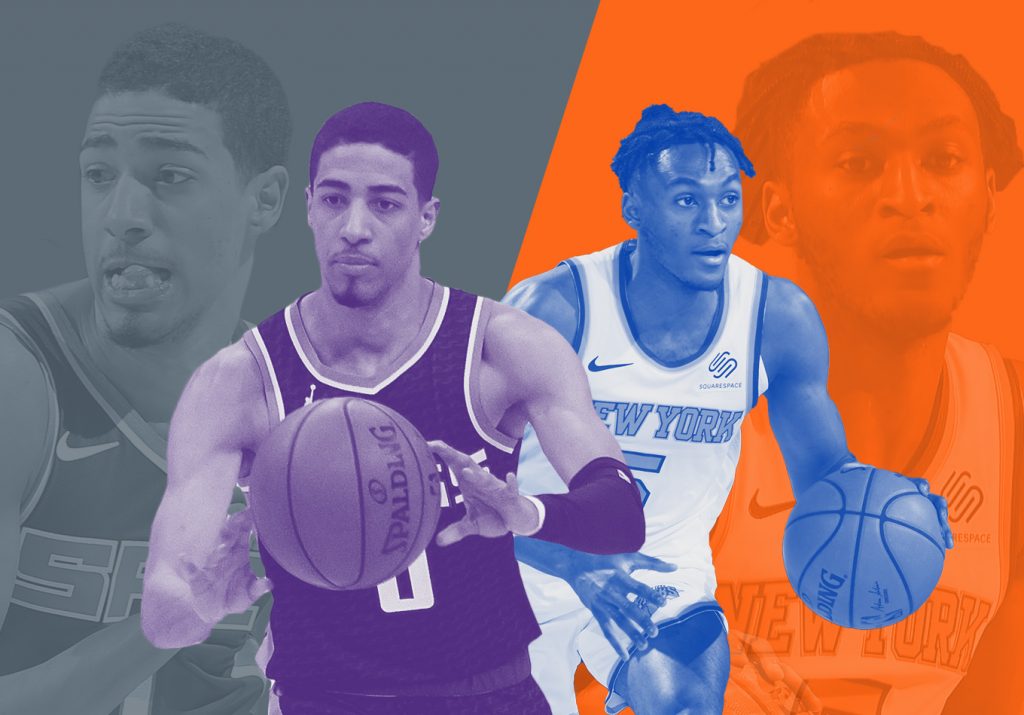 The Arrivals: Why We Should Have Seen These NBA Rookies Coming All Along 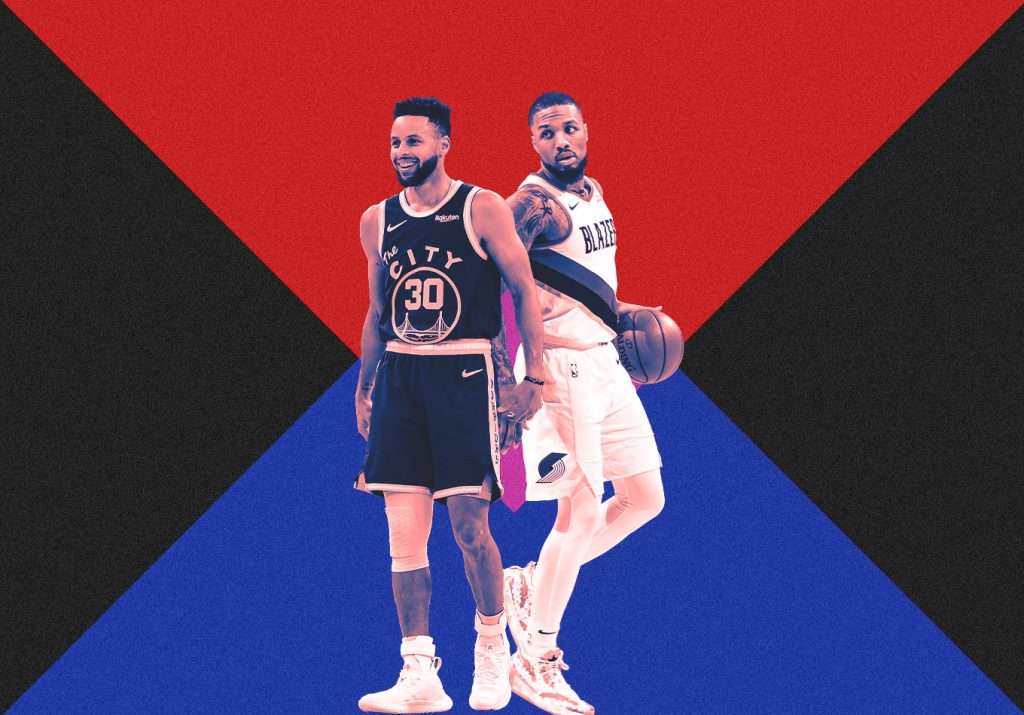