'He Had a Hell of a Week Tonight' | The Analyst 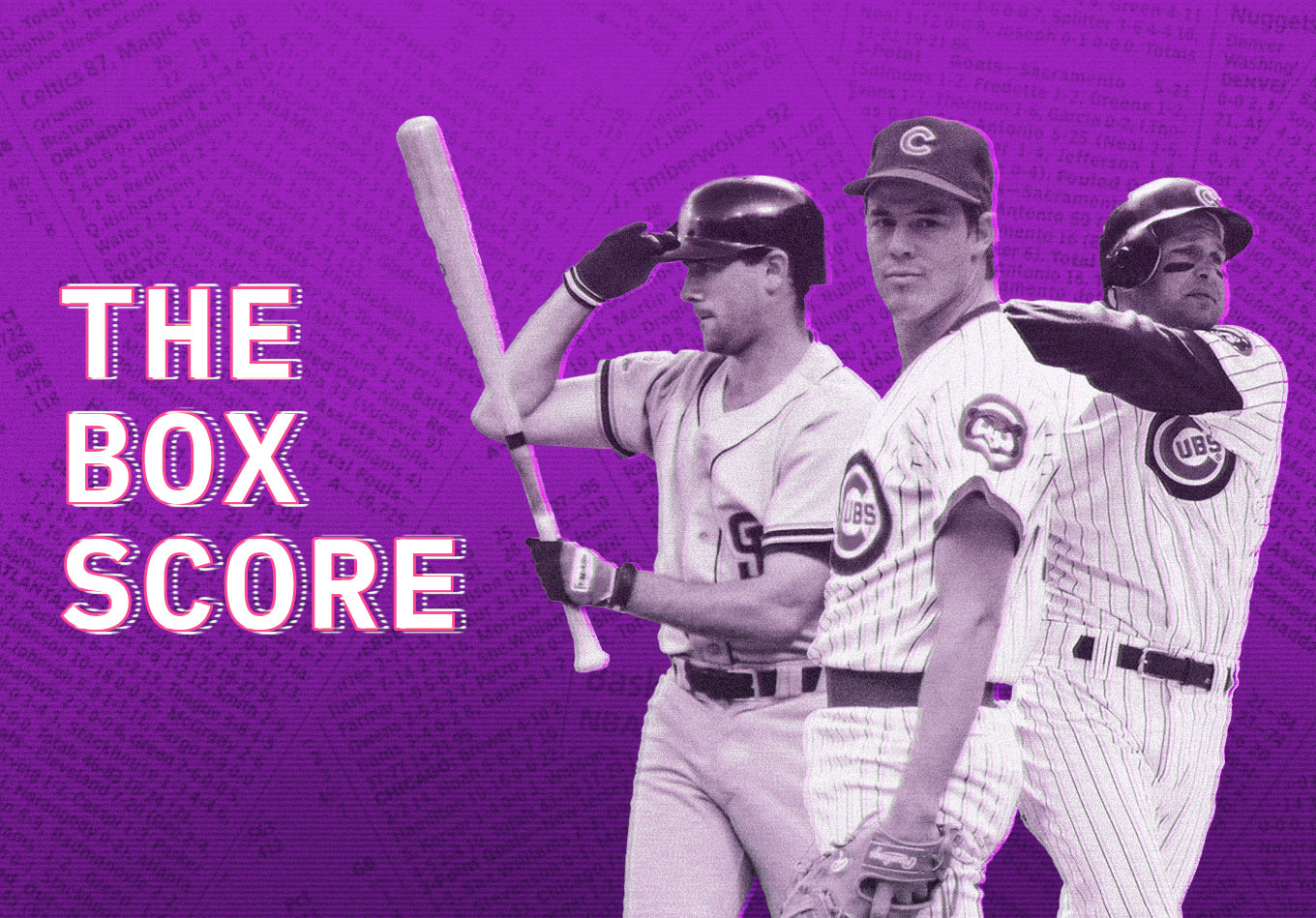 Marv Albert referred to the Cubs as the team of destiny, Tom Seaver said Will Clark and Mark Grace were two of baseball’s most promising young players, Vin Scully noted 23-year-old Greg Maddux looked out of sorts in warmups, and Mike Schmidt talked about himself.

The NBC lineup was as good as either on the field. Grace said in pregame that Clark was going to be the best hitter in baseball for some time, and that remained an accurate statement for at least six days.

It was Oct. 4, 1989 – Game 1 of the NLCS between the Chicago Cubs and San Francisco Giants – and the numbers baseball remembers were marked on Wrigley Field’s analog scoreboard and in the press box’s analog scorebooks. It remains 32 years on a box score that set up one of the more memorable hitting rivalries a postseason series has ever seen.

Thing is, it wasn’t yet the ’90s. And Will Clark wasn’t going to let the ’80s end without making his exceptionally vanilla name known even better than he had in the regular season.

The Giants won Game 1, 11-3. And in his post-game comments in The New York Times, Zimmer said, “What did I think of Clark’s performance? He had a hell of a week tonight.”

We can’t say whether John Oliver is paying the Zimmer estate royalties on that line, but we can say plenty about the individual lines from this game.

What happened was a 25-year-old Clark rocked Maddux and the Chicago bullpen. The Giants first baseman went 4 for 4 with two homers – one of which was a grand slam – a double, a walk and six RBIs. That’s pretty good even without historical context.

Clark’s ’89 season was his fourth in the majors and arguably his best. He’d broken out the previous two seasons, but in ’89 he hit .333 and finished second to baseball’s actual best hitter Tony Gwynn for the NL batting title. He also hit 23 homers with 111 RBIs and a .953 OPS to finish second in the NL MVP voting to teammate Mitchell. Also, an un-Clark-like nine triples.

The gravity of his matchup with the opposing pitcher is better appreciated in retrospect than it was that night. At this point, we’re not yet talking about the Maddux of 1992 who won the Cy Young before peacing out of Chicago or the Maddux who won the next three Cy Youngs in Atlanta, but we are talking about an established regular-season ace. He won a combined 37 games in 1988 and ‘89 with a 3.07 ERA in 487.1 innings. In ’89 alone, 19-12 with a 2.95. Third in the NL Cy Young. And you could un-embarrassingly argue he deserved to win it. San Diego closer Mark Davis won it, and Houston’s Mike Scott finished second with an ERA a shade over Maddux’s.

So. Standard playoff matchup of an ace vs. perhaps the best lineup in the NL. The Giants led the NL in slugging and only trailed the Cubs in runs scored. And Maddux had of course faced this lineup. He went 4-3 against the Giants in the ’88 and ’89 regular seasons, but it came with a 4.05 ERA. Clark had until that point in his career gone 7 for 20 with a home run off Maddux, so it’s not like Maddux was baffling him. Few right-handers did.

Clark – batting third behind Brett Butler and Robby Thompson and in front of MVP-to-be Kevin Mitchell – doubled to drive in the first run of the game in a three-run top of the first. He didn’t face Maddux in the second but hit a solo shot in the third. And in the fourth, he broke the game open with a two-out grand slam.

The LCS grand slam was the fourth since MLB introduced the league championship series in 1969 and first in seven years since Don Baylor hit one for the California Angels.

The New York Times wrote, “’Was it my best game ever?’ Clark asked. “I wouldn’t say that. But it was my most timely game ever.”

But here’s the thing: It was his best game ever. Or at least his best game at that time. He was the first player in the then-20-year history of the LCS to drive in six runs in a game. Recall he did it in four innings. Clark was only the second player in postseason history after Bobby Richardson’s six for the Yankees in Game 3 of the 1960 World Series to get to six RBIs that quickly.

OPS wasn’t a thing then, but his 3.750 single-game mark at the time matched 1985 George Brett as the best playoff mark among players with at least four at-bats. It’s since been surpassed three times and matched three more times.

Clark went on to have two five-hit games in his career, one of which came with seven RBIs two years later. But his 11 total bases in the NLCS game are tied with George Brett for 13th on the all-time single-game playoff list behind names like Babe Ruth, Reggie Jackson, Albert Pujols and some guy named Bob Robertson. Clark never surpassed that in another MLB game – regular season or playoffs.

The six RBIs also tied a single-game playoff record. That’s since been surpassed five times, but no one’s topped seven RBIs in a playoff game.

This was all a bit of a shame for Grace, who was incredible in the game and series but wasn’t quite Clark. The Cubs first baseman had something of a breakout season in 1989. It was his second in the majors. He hit .314 with a .405 on-base percentage, a Grace-like 13 homers and 79 RBIs, and an un-Grace-like 14 stolen bases.

Batting cleanup behind Jerome Walton, Ryne Sandberg and Dwight Smith, Grace went 3 for 4 with a home run. Big deal. That happens every postseason. But the homer was a two-run shot to the opposite power alley as Giants starter Scott Garrelts tried to pitch him away in one of the more interesting at-bats in postseason history. It went 12 pitches with as you can imagine, foul ball after foul ball. Pitch-by-pitch data goes back to 1988, and since then it’s one of four postseason at-bats of 12 pitches or more to result in a home run. Matt Williams did it in Game 4 of this same series, and Jayson Werth went 13 pitches in 2012 before homering off Lance Lynn.

Garrelts had gone 14-5 with an NL-best 2.28 regular-season ERA. After Game 1, Grace had improved to 10 for 13 with nine RBIs against him. In the regular season alone, Grace went 11 for 19 with a homer, two doubles and eight RBIs in his career against Garrelts, which is the best-ever average of any batter to face the right-hander nine or more times.

Grace and Sandberg combined for 13 total bases in Game 1, but no one else did anything – well – timely as Clark might say to drive them in.

Grace’s line in Game 1 is mostly relevant because it set the table for an epic showdown of left-handed first basemen born a few months apart in 1964. Neither relented much as the Giants won the series 4-1.

If there’s any silver lining in losing, it’s that Grace’s .647 average stands as the highest all-time for a single postseason in which a player has had at least 15 at-bats. Clark was higher for the series, but he went on to play four more games as Oakland swept San Francisco and his average dipped to .472 for the postseason. Second to Grace on that list is Babe Ruth, who went 10 for 16 in the 1928 World Series before the LCS became a thing. And Grace’s 1.799 OPS is third all-time among those with 15 or more at-bats behind ’28 Ruth and Juan Gonzalez in 1996.

Another way to slice it: Both Clark and Grace had 22 plate appearances. The LCS began in 1969. Among LCS players with 22 PAs or fewer in the 51-season LCS history, Clark’s 24 total bases rank first. Grace’s 19 are tied for sixth. It’s perhaps worth qualifying it this way because plenty of series go six or seven games. These two only had five in ’89, so they of course had fewer opportunities. Even if you up that to 25 PAs or fewer, Clark is second and Grace is tied for ninth, and we’re talking about a pool of 500 players through 2020 who have had between 20-25 plate appearances in LCS history.

Individuals or individual games aside, it was also just an interesting series. The Cubs only won Game 2. Yet they out-hit the Giants in the series by nine. The Cubs also had at least 10 hits in all five games. It stands as the only time a team has ever lost a multi-game playoff series despite having 10-plus hits in every game.

And they left a few on base – 43 in five games, which is tied for eighth all-time in series of five games or fewer. That really hurts because they lost the last three games by a combined four runs.

But Maddux was not a bad playoff pitcher. He made 30 playoff starts and five relief appearances with a 3.27 ERA, which is only a shade over his career 3.16 regular-season ERA. And this man’s prime overlapped with an offensive renaissance in baseball. Anyhow, he went 11-14 – don’t forget that one super impressive save in ’98 – in those playoff games, but we all remember how little run support he got with those late-90s/early 2000s Braves teams.

That’s being brought up because he had another four-inning clunker in the 2000 postseason. The Cardinals beat the Braves 7-5, and Maddux allowed seven runs – five earned – on nine hits. Batting cleanup and playing first base for the Cards was a 36-year-old Will Clark in his final season, who in a six-run first inning hit an RBI single off Maddux and came around to score.

So the man contributed to two runs in a two-run final to haunt Maddux again. The Cards beat the Braves before losing to the Mets, but Clark hit .345 with two homers in seven playoff games. The following year, 1989 San Francisco Giant Bob Brenly managed a 37-year-old Mark Grace to a World Series ring with Grace sparking an Arizona rally to famously beat Yankees closer Mariano Rivera.

Clark didn’t win one, and you could say he quit too soon. In 2000, he hit .319 in 130 games with Baltimore and the Cards. In his last four seasons, he hit .313, which among players since 1940 has only been bettered by Roberto Clemente, Ted Williams, John Kruk and Kirby Puckett.

Both Clark and Grace finished their careers with .303 regular-season averages. Grace hit .329 in the playoffs. Clark bettered that and hit .333 – because he had one more hit than Grace on Oct. 4, 1989.