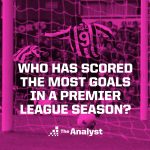 Reads from the Analyst
Who Has Scored the Most Premier League Goals in a Single Season?

Twenty league goals in a season is a solid target for any professional footballer and one that many top players, including Michael Owen, never reached in their careers. So it does beg the question: who has scored the most Premier League goals in a single season?

The 30 goal mark has been breached only 11 times in the history of the competition by nine different players, and it has been four years since any player hit the mark. So in this episode of ‘The Reads From The Analyst’, we are going to celebrate those players who have scored the most Premier League goals in a single season because it might be a while until we see the record breached.

This podcast originally appeared as an article on The Analyst in June 2022.