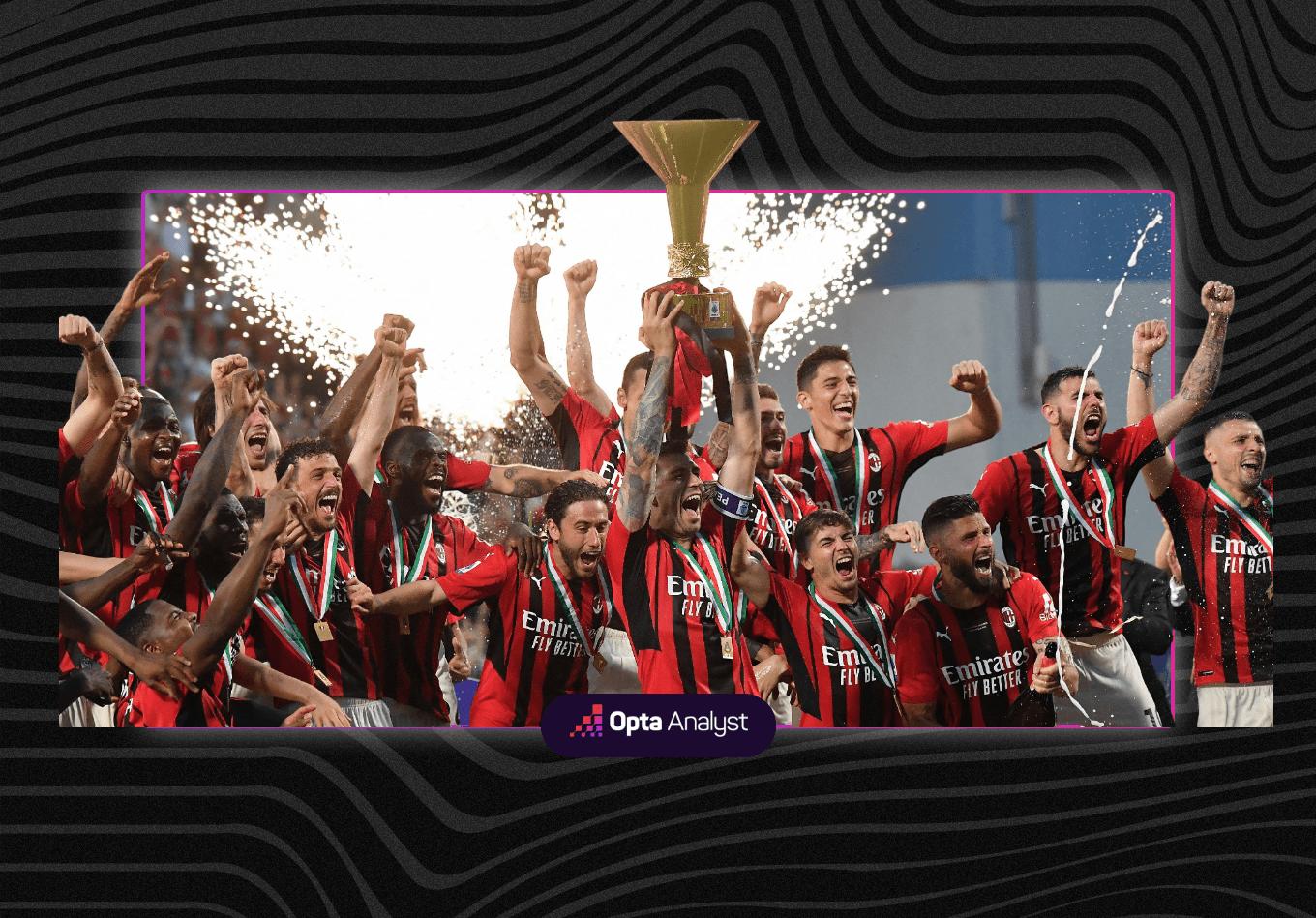 Who is the most likely to win the Serie A title race in 2022-23? Which clubs will qualify for the Champions League? Who will be scrapping for survival? Fear not, our trusty supercomputer has the answers for you.

Napoli are bossing things in Italy, right now. The Naples side are eight points clear of second-place Milan as the Italian top-flight returns to action following the 2022 World Cup in Qatar, and our supercomputer is struggling to see past a third Serie A title for them in 2022-23.

Their chances of winning their first scudetto since 1989-90 thanks to the brilliance of Diego Maradona are rated at 88.7%, while Napoli fans are almost certain to enjoy UEFA Champions League football again in 2023-34, with the supercomputer rating their chance of finishing outside the top four places in Serie A at just 0.06%.

Luciano Spalletti’s team have dropped just four points in their 15 matches (W13 D2) and are the only unbeaten team left across the top five European leagues in 2022-23.

As they return to Serie A action against Inter Milan on Wednesday, Napoli are on a ridiculous 11-game winning run in the league – their best-ever run in a single top-flight league season. This is only the fifth time that a side have won at least 13 of the opening 15 Serie A games of a season – prior to Napoli. only Juventus have recorded this, in 1949-50, 2005-06, 2013-14 and 2018-19. Juve finished top of the Serie A table in all four of those seasons, although 2005-06 saw them relegated (the less said about that, the better).

No other side is being given more than a 6% chance of winning the Italian league title this season, with Milan the next highest ahead of rivals Internazionale at 4.2% and Juventus’ 0.8%. No side outside that trio have won the Serie A title since Roma did it in 2000-01, but 22 years later it looks like that run is coming to an end this summer.

Which Serie A Clubs Will Qualify for the Champions League?

Well, Napoli are pretty much certain to be in the top four (99.94%) according to our Serie A predictions from the supercomputer, but who else is most likely to join them?

The city of Milan will most definitely have at least one of their teams in the UCL next season, and probably both if the supercomputer is correct. Milan are being given a 91.92% chance of securing a top four finish in Serie A, just ahead of their rivals Inter at 87.60%. The last season without either Milan club in the Champions League group stage was 2017-18, and it looks like being a sixth successive UCL season with Milanese participation in 2023-24.

So that’s the most likely three teams to seal at top four place, but who will be the fourth? The battle realistically comes down to just four teams, based on the supercomputer’s output.

No Italian team have reached the final of the Champions League (in its current guise) more often than Juventus, but unfortunately for them, they’ve lost five of their six final appearances since 1992.

They are being given a 60.09% chance of finishing in the top four and therefore qualify for the UCL next season. Juve are currently third in the table ahead of the return to domestic league action, with a one-point cushion over fourth-place Milan and fifth-place Inter.

Jose Mourinho’s Roma find themselves way down the table in seventh, but still just three points from the UCL qualification spots. They have more points this season (27) than at this stage last term (25) but scoring goals has been their problem – their tally of 18 goals scored is the lowest of all top eight teams in Serie A and fewer than 11th-placed Bologna (20) and 12th-placed Salernitana (19).

If you really want to place your money on an outside bet for a UCL place via Serie A in 2023-24, then Udinese (1.38%), Torino (0.22%) and Fiorentina (0.05%) are the only other clubs with any chance of finishing in the top four based on our supercomputer’s calculations.

Unfortunately for the current bottom three teams in Serie A, the supercomputer believes there is likely to be continued woe for the troubled trio.

Both Verona (five) and Sampdoria (six) have earned their fewest points ever after 15 Serie A matchdays in a single season, while bottom side Verona are currently on an awful 10-game losing streak in the competition. Only five teams in the history of the competition have recorded more consecutive defeats in a single season – Triestina in 1947 (11), Brescia in 1995 (15), Padova in 1996 (11), Benevento in 2017 (14) and Udinese in 2018 (11).

Much of Sampdoria’s problems have been in attack. Their six goals scored is the lowest among all teams in the top five European leagues, while no club across these five competitions has a lower shot conversion rate than them (4%).

Cremonese are the only Serie A side yet to win a league match this season (D7 L8), but they are still 13 games off the Italian top-flight league record of failing to win any of the opening 28 games to a season – a record shared by Varese in 1971-72 and Ancona in 2003-04.