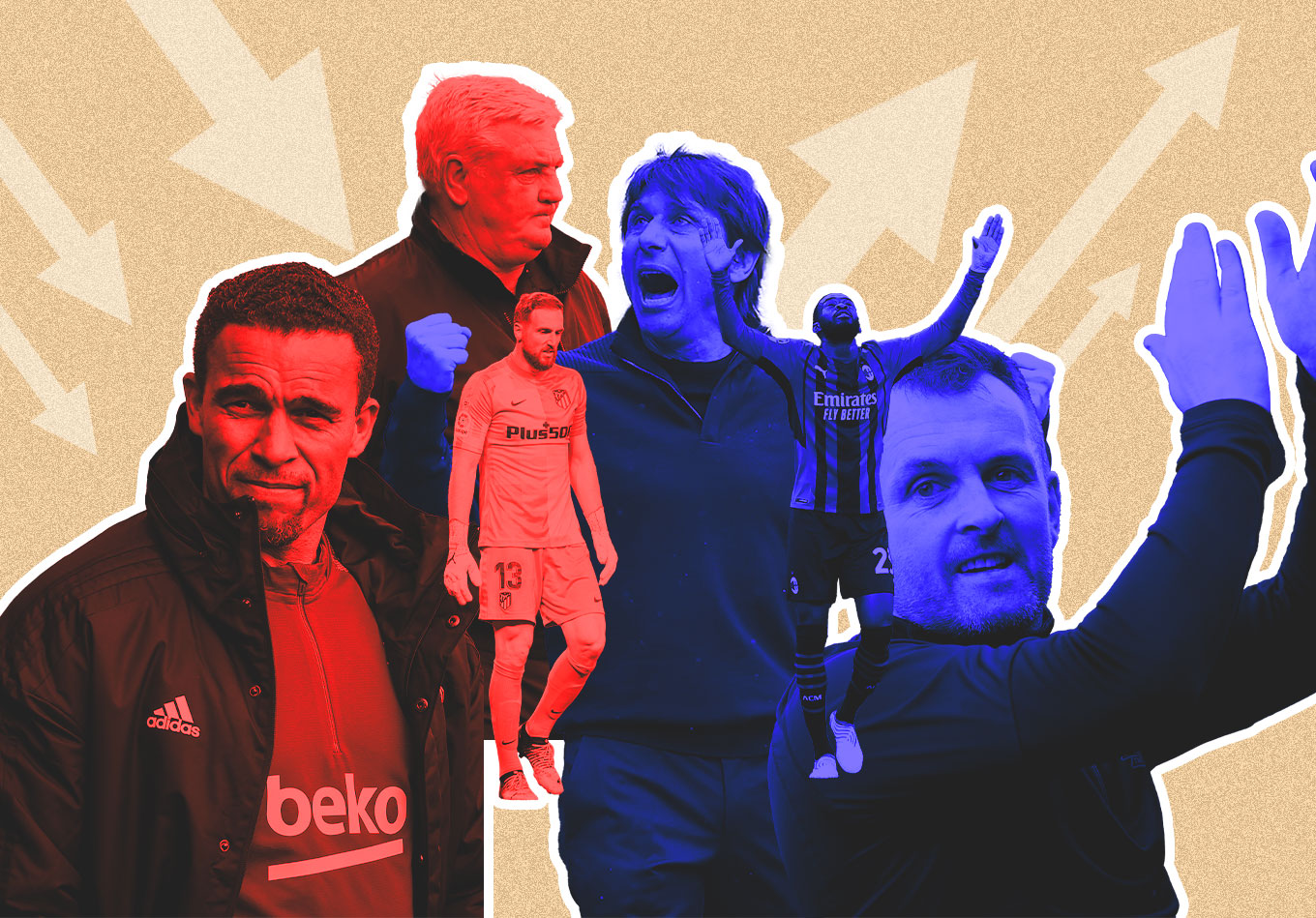 The Dust Settles: The Biggest Changes in Stats Perform’s Power Rankings Over the Course of this Season

So that’s that. Another season in the books. Lots happened, but in some ways, lots stayed the same. As tends to happen, European football’s hierarchy tightened their stranglehold on silverware. Real Madrid, the very definition of footballing heritage, won their record 35th La Liga title and a 14th European Cup/Champions League. Bayern Munich, Manchester City and Paris Saint-Germain continued their domestic league dominance.

Elsewhere, it was a renaissance season for AC Milan, who won their first Scudetto in 11 years and returned to the Champions League for the first time since 2013-14. Forty-two years after winning the UEFA Cup in 1980, Eintracht Frankfurt won the famous trophy again, beating Rangers in the Europa League final.

But aside from the infrequent treat of European competition, we don’t get to see clubs from different countries play each other all that often. Was Bayern’s Bundesliga win any more difficult than PSG’s Ligue 1 stroll? Who had it harder domestically, Real or Milan?

Stats Perform’s Power Rankings can help us answer such questions.

The rankings rate an enormous number of teams (19,008 across 391 domestic leagues) across the globe based on a system that scores the current strongest side 100 and the weakest zero. The ratings evolve each day based on the results of both an individual club and those of other teams within its own domestic league. Domestic and European fixtures are taken into account, as well as the strength of each league.

Comparing the rankings from the start of the year to the ones at the end of May essentially gives us a global league table. Who had a season to remember and who had one to forget?

Despite their season ending in Champions League final heartbreak and being pipped to the Premier League title by a solitary point, it was still an extremely positive season for Liverpool. They went deep in every competition they entered, winning two domestic trophies along the way. In a different season, they really could have won all four. The performance across all four competitions, particularly in Europe, sees them end the season in the top spot in our power rankings, jumping up five places from the start of the season.

Ironically, it is Manchester City who they knock from top position, with Pep Guardiola’s side dropping to second in the rankings. It was a fourth Premier League title in five years, but European glory still eludes the Manchester side.

For Real Madrid, another La Liga title and a historic 14th European Cup sees them move… nowhere. It’s tough being at the top.

Bayern’s 10th consecutive Bundesliga title only nets them so much credit, and a disappointing European exit at the hands of Villarreal – who are down in 17th in the rankings – contributes to a two-place slide.

After spending a horrible few months outside the top 10 towards the back end of 2021, Barcelona have stabilised under Xavi’s watch.

Ajax are the real story here. They won the Dutch Eredivisie by just two points, but were far and away the best team, and deserved to win by more. Ajax had an expected goals difference per game of +2.0. PSV were next on +1.1. Erik ten Hag’s men in 2021-22 were the first side ever to win 10 games by a 5+ goal margin in a single Eredivisie campaign.

But domestic wins will only get Ajax so far, and it’s in Europe where their performances have contributed to their continued rise up our rankings. One of three sides with a 100% record in the Champions League group this season, Ten Hag’s men scored 20 goals on their way to romping Group C. They then bizarrely fizzled out against Benfica in the last 16, but the group stage dominance – thumping the likes of Dortmund and Sporting – was enough to net them serious kudos in our model.

Atlético Madrid secured Champions League for the 10th consecutive season this term but were largely non-runners in La Liga. Diego Simeone’s men lacked their characteristic defensive solidity, conceding 43 goals in the league, the highest figure since 2011-12, while Jan Oblak’s domestic form really suffered. Excluding penalties and own goals, he conceded 33 times from an xGOT value of 24.8, meaning he conceded over eight more goals than expected. That was the second-worst figure of any keeper in the Spanish top flight, behind only Fernando Pacheco of bottom-placed Alavés. Atlético drop five places to 10th overall.

Porto are perhaps the biggest surprise in this next bracket. In Europe, they were drawn in the Group of Death with Liverpool, Atlético Madrid and AC Milan, where they finished third. After dropping down to the Europa League they overcame Lazio in the knockout round play-offs but were dumped out by Lyon. It didn’t feel like a continental season worthy of the supposed 11th-best team in the world.

But a look closer to home is revealing. Porto completed the domestic double in Portugal in some style. They lost just once on their way to winning the Primeira Liga, winning 91 points in the process, their highest points tally in 27 years. They plundered 86 goals, the highest total we have on record, while shipping just 22. Sérgio Conceição’s men were by far the best team in Portugal, registering 12 more expected goals over the course of the season than anyone else, while only Sporting managed a lower expected goals against total.

The mood in North London is aptly reflected in the rankings, with Tottenham leapfrogging Arsenal in both the Premier League table and in our standings. Spurs finished the season strongly and will crucially play Champions League football next season. Meanwhile, Arsenal will have to take solace in the fact that at least they scored more goals in total (61) than Spurs did solely under Conte (60). For a while, they were losing that race too.

AC Milan move 14 spots into 14th place after a fantastic season in Serie A. Stefano Pioli’s side secured their 19th Italian title on the last day of the season, their first since 2010-11, with a club-record points tally of 86.  With an average squad age of 26 years and 97 days old, Milan are the youngest team to win the Scudetto in the three-points-for-a-win era.

Eternal rivals Inter finished in second, which was extremely kind of them because it’s given us a nice statistical quirk. After finishing one and two last year as well, 2021-22 was the first time in history that the two Milan clubs finished in the first two positions in two consecutive league seasons.

Real Betis crack our top 20, too. Their fifth-place finish in La Liga may not immediately sound impressive, but their 65 points was their best haul since the 1996-97 season. Betis’ crowning achievement this year was winning the Copa del Rey for just the third time in their history.

Salzburg crushed in Austria, winning the domestic double. In the Bundesliga, they lead the league on every single matchday, lost just once and won by 15 points. Enough said.

Royale Union Saint-Gilloise are the biggest risers of all teams inside the top 250 this year. After an almost half-century exile from the Belgian First Division A, they finished second in their very first season back in the top flight for 48 years.

However, it was not a typical tale of the rise of a minnow. This is the renaissance of a fallen giant. With 11 league titles to their name, Union Saint-Gilloise are the third most successful club in Belgium. Les Unionistes dominated Belgian football at the turn of the 20th century, winning six straight First Division titles between 1903 and 1910. A constant presence in the top flight, Union failed to finish lower than fourth place in the top tier between 1902 and 1926. They were relegated for the very first time in 1963 and began to yo-yo between the top two divisions. Union played what would be their last game in the First Division a decade later, prompting a nearly 50-year absence from the top tier and a steep descent into the lower leagues of Belgian football. It’s good to have them back.

Strasbourg are also huge risers. Under new manager Julien Stéphan they are punching way above their weight in France, and finished sixth on a shoestring budget.  Last month, we looked at how they play under Stéphan and analysed how the Frenchman has turned the club’s fortunes around.

The uptick in Luton Town’s fortunes is remarkable. In 2013-14 they were playing National League football, and just eight years later they made the Championship play-offs despite having the sixth-lowest budget in the Championship. Luton’s achievements are made all the more remarkable when you consider that their squad cost just £4.9m to assemble. The Hatters keep exotic company in our overall rankings, sitting between FC Midtjylland and Genoa.

Just a year ago, Nantes were battling for the Ligue 1 lives. After finishing 18th in 2020-21, they beat Toulouse in the relegation play-off to maintain their Ligue 1 status. Fast forward to this year and they enjoyed a top-half finish, netting their highest top-flight points haul since 2002-03.

Millwall, well. They deserve everything after this incredible performance away at Blackburn.

The only other occasion of a side failing to register a single shot in a match across Europe’s big five leagues and the entire English pyramid? Genoa away at Juventus in December 2021. They lost 2-0.

We covered the fall of the Turkish ‘big three’ earlier this year on the site, and the rankings confirm this. Besiktas have fallen to spot number 240, Galatasaray to 262. Fenerbahçe managed to turn things around in the second half of the season, but there is definitely a changing of the guard happening in Turkey. Just to show how much these giants have fallen, Galatasaray are sandwiched between MK Dons and Coventry City in the rankings.

West Brom’s downward spiral in 2022 was something to behold. They went top of the Championship after a 4-0 away win against Cardiff on MD10, and promotion was on the cards. A mini-slump followed, but at Christmas they were still in the top four. 2022 was an unravelling though, and in the middle of a seven-game winless run, Valérien Ismaël was sacked and replaced by Steve Bruce. The change resulted in little success. The league table viewed from 1 January on shows WBA’s form was only good enough for 18th place.

Funnily enough, The Baggies are just one place ahead of fellow former Premier League team, Stoke City, while the pair sit just one spot ahead of Real Madrid’s B team.

Talk about a cold hard dose of reality.

Watford lost more league games (27) than any other side in Europe’s big five leagues this season. Turns out that cycling through three managers in one campaign is not a recipe for success.

The Power Rankings can also be used to analyse the relative difficulty of each league. By averaging the rank of each team in each league, we can arrive at an overall figure for league strength. Unsurprisingly, the Premier League is the strongest league overall, while La Liga ranks second.

Is it harder to win a title in Germany or France? The rankings suggest the former, with the average top-flight Power Ranking in Germany at 79.6 compared to 76.7 in France. At 78.1, Serie A is nestled in between those two as the fourth-most competitive league.