Cover 3: The Rams and Packers on the Brink, Joe Burrow's Latest Heater and Other Week 8 Storylines | The Analyst 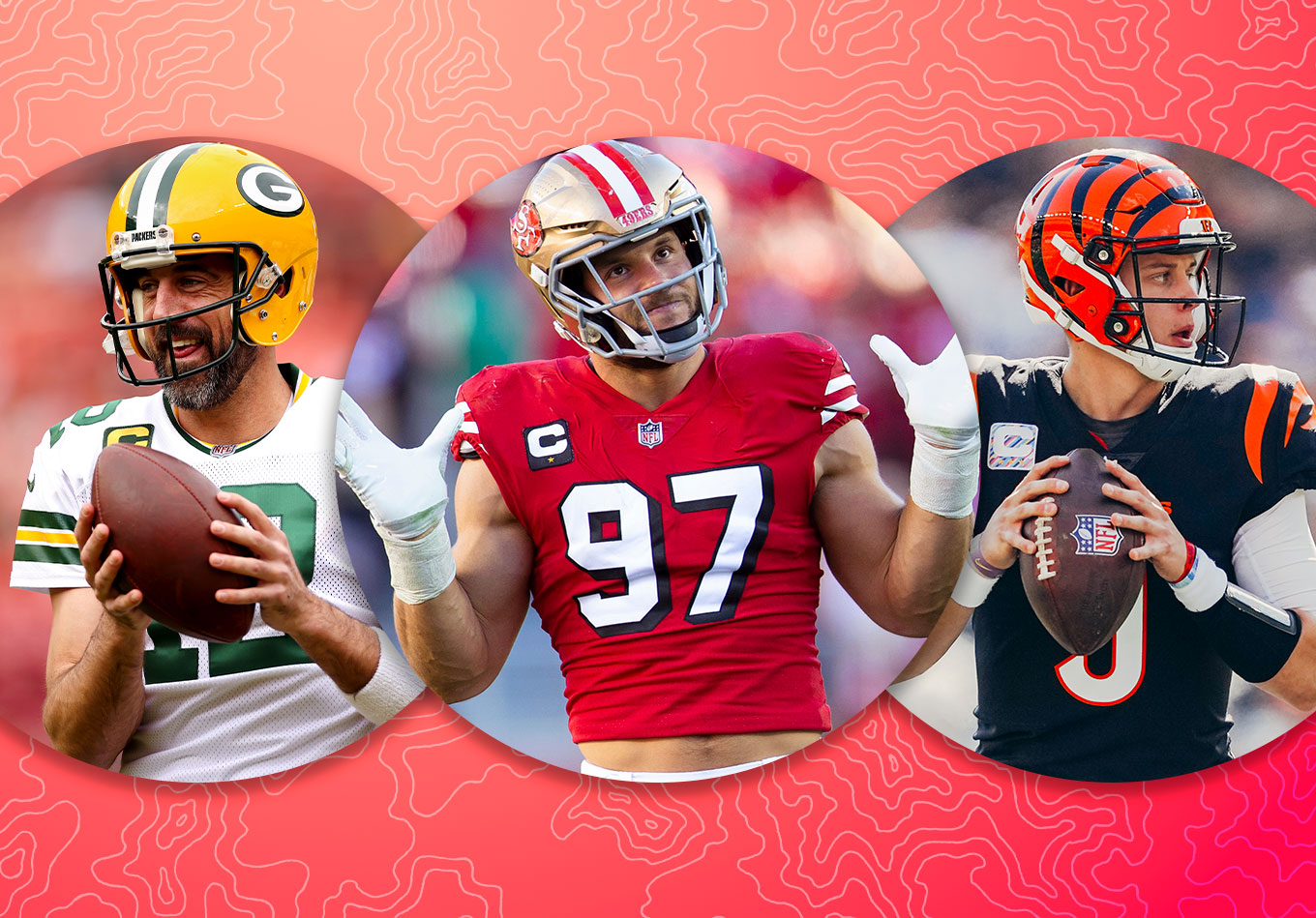 Cover 3: The Rams and Packers on the Brink, Joe Burrow’s Latest Heater and Other Week 8 Storylines

2022 hasn’t been ‘The Year of the Aging Quarterback’, or the teams that employ them.

Tom Brady is under .500 through eight games of a season for the first time in his incomparable 23-year career. Matt Ryan is getting benched in Indianapolis. Russell Wilson’s first season in Denver is shaping up as his worst as a professional.

Brady’s 3-5 Tampa Bay Buccaneers aren’t the only disappointment nearing the midway point of an upside-down NFC, where expected also-rans like the New York Giants and Seattle Seahawks have emerged as serious playoff contenders out of nowhere. The Bucs, Green Bay Packers and Los Angeles Rams – two other teams with starting quarterbacks 33 years or older – all won at least 12 games in 2021. None of them will be entering the weekend with a winning record.

Having the good fortune of residing in the talent-deficient NFC South, Tampa Bay’s odds of giving Brady another crack at the playoffs in his final (we think) campaign still look favorable, which we recently outlined in our rest-of-season projections. And despite their lackluster results and glaring issues, the reigning world champion Rams still sit with a reasonable chance of snatching a bid out of the muddled NFC West.

The outlook doesn’t appear quite as rosy for Aaron Rodgers’ Packers, who’ve lost three straight games and own the fourth-toughest remaining schedule based on current records. That difficult stretch begins with arguably the most daunting of challenges, a trip to Buffalo on Sunday night to take on the big, bad Bills.

That primetime showdown, as well as the Rams’ clash with perpetual nemesis San Francisco that figures to weigh very heavily on the ultimate outcome of the NFC West, are two of three games SmartRatings has tabbed as the most appealing on the Week 8 slate.

For all the success the Rams have enjoyed under Sean McVay, it’s almost unfathomable to believe the level of dominance the 49ers have displayed over their NFC West rivals the past few years. Sure, Los Angeles did win the most important recent matchup in last season’s conference championship game, but San Francisco owns seven straight regular-season victories in the series following its 24-9 triumph in Week 4.

The Rams do enter this clash with the benefit of a bye week to try to work out their problems, and the defending Super Bowl champions certainly have a few. There’s been virtually no running game to speak of, the pass rush has been almost non-existent outside of perennial havoc-wreaker Aaron Donald, and an offensive line that’s being rebuilt on the fly hasn’t provided Matthew Stafford with anywhere close to the level of protection it did during the 2021 title run.

Making matters worse, that shaky front wall will now be without left tackle Joe Noteboom for the rest of the season after he tore his Achilles in the Rams’ Week 6 win over the Carolina Panthers. It’s unclear what the solution will be, but with Nick Bosa and San Francisco’s punishing defense – by far the top-ranked unit in defensive EVE – coming to town, one needs to be found right away.

The 49ers relentlessly harassed Stafford in the Week 4 meeting, resulting in seven sacks and a back-breaking Pick 6 that sealed the outcome in the fourth quarter. Bosa accounted for 10 pressures and two sacks alone, while bookend Charles Omenihu totaled seven pressures and one sack.

Los Angeles tried to combat the Niners’ steady pressure with screens and short throws, a tactic that largely proved ineffective. Stafford averaged a meager 5.29 yards per pass attempt, his lowest in 27 starts (including the postseason) since being acquired by the Rams prior to last season.

Having Stafford drop back 55 times again like he did in Week 4 isn’t a great recipe for success, but the Rams may have no other choice. Los Angeles ranks 30th in EVE in rushing offense (0.681 yards under expected) and San Francisco’s defense is yielding a league-best 1.569 yards under expected.

Of course, the Rams did try to improve their lackluster ground attack by making a bid for Christian McCaffrey, a pursuit foiled when the 49ers trumped their offer to land the former Panthers star.

Chalk that up as another San Francisco win in the rivalry.

Though our model has this game rated among the most intriguing of the week, the public doesn’t appear to agree. The Bills are anywhere from 10.5 to 11.5-point favorites, which if holds would mark the first time since Rodgers became the Packers’ starting quarterback in 2008 that he’ll enter a game as a double-digit underdog.

To be honest, it’s really hard to make a compelling case for the struggling Packers here. The juggernaut Bills field the top-ranked offense and second-ranked defense, according to EVE. They’re yielding a league-low 13.5 points per game, whereas Green Bay’s sputtering offense is averaging 14.0 per game on the road.

And while the Packers limp into Orchard Park possibly without their top wide receiver (Allen Lazard, shoulder) and best pass rusher (Rashan Gary, concussion), Buffalo will be well-rested after getting Week 7 off and is 5-0 following a bye week under Sean McDermott.

With essentially every metric seemingly in the Bills’ favor, Green Bay will need to find some way to tip the scales, whether it be a momentum-shifting turnover or a splash play on offense. Unfortunately for Cheesehead Nation, the Packers don’t take the ball away (five in seven games) and will be hard-pressed to match the firepower of a Buffalo offense that leads the NFL in yards per play and has eight big-play touchdowns (scores of 20-plus yards) in six games.

Four of those scores have come courtesy of Gabe Davis, whose rate of nearly 17 burn yards per target is the best of any receiver with at least 10 catches this season. The Packers have one player with a rate above 10 yards per target, and that’s the currently injured Randall Cobb.

If there’s one matchup Green Bay could potentially win – and likely needs to exploit to its fullest – it’s in how both of these teams have performed within the red zone.

The Bills really should be undefeated coming into this one, as they dominated the Miami Dolphins in every facet but the scoreboard back in Week 3. But a late turnover on downs on the Miami 1-yard line, an earlier Josh Allen lost fumble deep in Buffalo territory and a prior red zone trip that resulted in a short field goal helped their AFC East rivals escape with a 21-19 win despite being outgained by a massive 497-212 margin in total yards.

Miami was able to take full advantage of its opportunities that afternoon by scoring touchdowns on all three of its red-zone trips, and the Packers will likely need to as well. And although Rodgers’ 2022 season has paled in comparison to his MVP campaigns of the previous two years, he’s still been one of the best in the business within an opponent’s 20-yard line.

Green Bay’s defense has been rather stingy in its own end as well, having limited the New York Jets and Washington Commanders to just one touchdown in five total red-zone forays over its last two games.

And while Allen and the Bills certainly pose a more formidable threat, Buffalo does sit in the middle of the pack in touchdown red-zone efficiency (54.5%, tied for 15th overall).

While the Rams seem to still be dealing with some lingering effects from a Super Bowl hangover, the Bengals have unquestionably awakened from their early slumber. After beginning defense of its AFC title with a pair of frustrating close losses, Cincinnati has won four times during a five-game stretch in which Joe Burrow has played like a bona fide MVP candidate.

The 2022 Bengals have proven so far to be a team that goes as Burrow goes. Their franchise quarterback has a 125.5 passer rating with an 11-to-0 touchdown-to-interception ratio and a sensational average of 9.2 yards per pass attempt over the course of the four wins. In the three losses, Burrow has thrown five picks, averaged 6.1 yards per attempt and posted a 75.8 rating.

In other words, the Bengals are very beatable when Burrow plays, say like, Jacoby Brissett.

Burrow will be coming into Northeast Ohio like a house of fire after piling up 781 yards and six touchdown passes in wins over the New Orleans Saints and Atlanta Falcons, but he’ll also be entering without his full arsenal of weapons with the news that difference-making receiver Ja’Marr Chase will miss at least four weeks with a hip injury that clearly hadn’t been negatively impacting his performance of late.

The absence of the 2021 NFL Offensive Rookie of the Year, who’s had back-to-back games with at least seven catches, 130 yards and two touchdowns, undeniably makes the task at hand easier for a Cleveland team trying to avoid a fifth straight loss. The last time the Bengals didn’t have their terrific trio of Chase, Tee Higgins and Tyler Boyd together was three weeks back in Baltimore after Higgins departed very early when aggravating a previous ankle injury. The offense wasn’t quite the same as Burrow averaged a Brissett-esque 6.20 yards per pass attempt and threw a costly interception as Cincinnati left with a 19-17 loss.

Cleveland is going to do what it always does on offense, pound away with workhorse running back Nick Chubb and get enough from the unspectacular but mostly steady Brissett in an effort to keep the chains moving and keep Cincinnati’s explosive passing machine off the field. It’s a blueprint that can work, provided the defense does its part.

The Browns have been deplorable stopping the run, ranking 29th in EVE, but that’s not a major issue here since Cincinnati is dead last in EVE in rushing offense (averaging nearly a yard under expected). Cleveland’s pass defense has had its moments, though, and the Browns have actually been the best in the league at preventing opposing receivers from consistently getting open since Week 3.

Cleveland may have an emerging star on its hands in rookie Martin Emerson, whose open-allowed rate of 45.8% since Week 3 is among the NFL’s best marks among cornerbacks. Denzel Ward is at 55.6% over that span, and the Browns are hopeful the 2021 Pro Bowler can get cleared from a concussion that’s sidelined him the past two games.

Interestingly, Chase, Boyd and Higgins all possess open rates slightly below the league norm of 72.4% for wide receivers. They’ve still been able to consistently make plays, however, largely due to Burrow’s accurate right arm. The former Heisman Trophy winner’s well-thrown rate of 84.8% ranks sixth among quarterbacks with 100 or more attempts.

The Browns’ intended plan of treading water until Deshaun Watson returns from suspension in December isn’t going all that well, but they’ve generally been competitive with five of their seven games decided by three points or less. Yeah, they’re 1-4 in such situations, but the point is they could conceivably be sitting at the top of the AFC North instead of the bottom if not for some bad breaks and a few very costly late-game blunders.