Super Bowl LVI: What to Watch for When the Rams Have the Ball | The Analyst 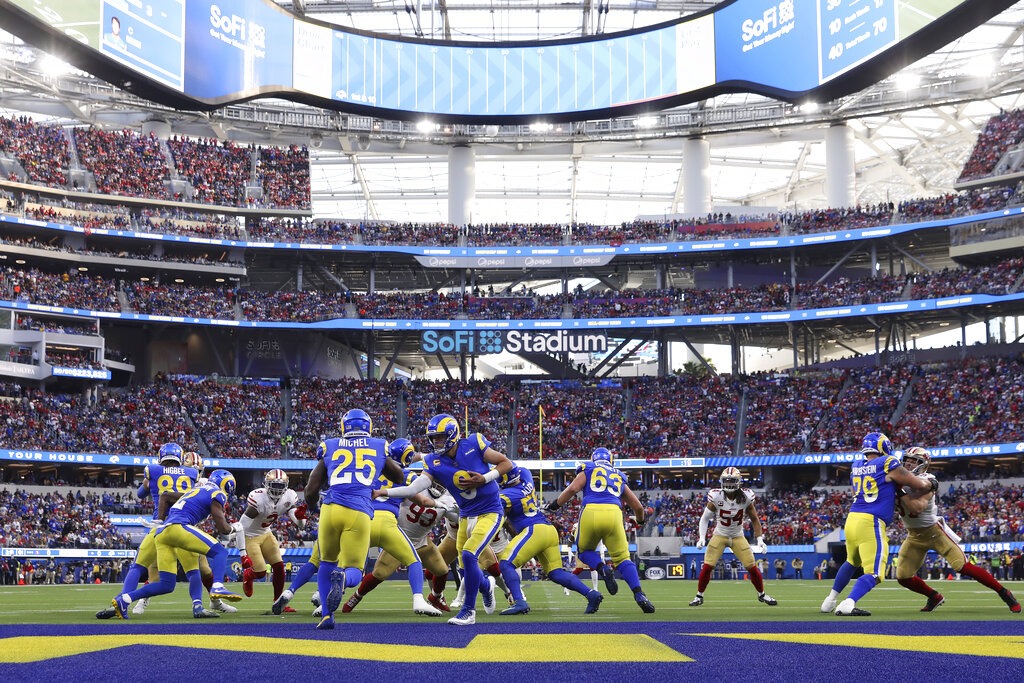 Super Bowl LVI: What to Watch for When the Rams Have the Ball

In a Super Bowl that features Matthew Stafford, Cooper Kupp and Odell Beckham Jr., why have we chosen to start out by breaking down the Los Angeles Rams running game?

Because much of their passing game is based on the success of their two running plays.

That strategy figures to put a lot of pressure on the Cincinnati Bengals defensive line. If there is no push and the Rams control the line of scrimmage, things could get overwhelming for the Bengals defensive personnel who must play both the run and the pass.

Of course, Stafford will also have to limit his mistakes for the Rams to have success offensively. This is tangentially related to the Bengals defensive line getting pressure, but ultimately it falls on Stafford to be smart with the ball.

Let’s dig into what we mean in our technical, data-driven look at what to watch for when the Rams have the ball.

The Rams running game revolves primarily around two different run concepts: inside zone and duo. Their version of inside zone is a backside zone in which the offensive line down-blocks towards the play side.

In other words, the line is shoving the defenders towards the direction of the handoff. The running back’s goal is to hit one of the backside gaps, which are the spaces between the center and guard, guard and tackle, or tackle and tight end on the opposite side of the handoff.

In the video example, the handoff is to the right, the line is creating leverage towards the back side by shoving all their defenders to the right, and the running back cuts into the backside B gap.

Duo is used to create double teams at the line of scrimmage, generally with the center and backside guard and the playside tackle and guard. The running back’s responsibility is to read the playside linebacker and pick the gap opposite of the one the linebacker picks.

In the video example below, the running back is reading No. 54 and once 54 declares into the playside B gap – the gap between guard and tackle – he immediately shoots through the C gap.

Perhaps the most important part of duo runs in the Rams offense is the blocking of the tight ends and any attached wide receivers. Only the Patriots used their receivers as blockers more than the Rams did in 2021.

To measure run blocking production for offensive linemen, we use one-on-one blocks and double teams on all running plays, and records wins and losses for each one.

So rather than measuring run blocking production across all plays in which a player is on the field, we can measure production when a player is actually involved in the play. Win rate for offensive linemen is around 74%, while receivers and tight ends average about 69%.

The Rams finished the season with the third-best win rate as run blockers. David Edwards was the best of the lot, winning 82.2% of his blocking matchups, but all except Andrew Whitworth were above average.

Even with a great offensive line, the key to the Rams’ running success is the blocking ability of their tight ends and wide receivers, specifically Tyler Higbee and Cooper Kupp. Higbee finished the year with the third-best run blocking win percentage among tight ends at 79.6% and Kupp won his matchups at a league-leading clip of 82.6%.

Higbee’s availability for the Super Bowl is in question, and while replacement Kendall Blanton has not had a big sample size this year, his win rate of 63.4% is a significant downgrade from Higbee.

The Bengals run a 4-3 defense, meaning there are four down linemen, generally two defensive tackles and two defensive ends, and three linebackers. However, they’ll usually play with an extra defensive back instead of a third linebacker called a ‘nickel.’

Hubbard will likely see a lot of action in this game as the Rams duo plays are most frequently run to the right side. We will see Hubbard take on the Rams TEs, which is a potential mismatch favoring the Bengals if Higbee doesn’t play. The Rams could instead opt to run more of their backside zone, which would match up Reader with their best run blocker in Edwards.

But if the Rams can get past this initial line of defense, there isn’t much on the back end to prevent those 4-yard runs from turning into runs of 8 yards or more. Germaine Pratt (19.5%) wins slightly more than average for an inside linebacker (17.1%), but Logan Wilson (10.1%) is well below average.

The Bengals have had to shuffle their line a bit recently with the loss of defensive tackle Larry Ogunjobi and the defensive front will see rotational players Tyler Shelvin, Damion Square, Zach Kerr, Wyatt Ray and Khalid Kareem play a few snaps.

Though their usage of bootlegs and play action has dropped since their acquisition of Stafford, the Rams still employ them almost 20% of the time.

If we compare this video to the duo video we broke down earlier, we can see why this works. While the offensive line is blocking as if the play is inside zone, the key to this play is Kupp (No. 10) and 49ers slot corner K’Waun Williams (No. 24).

In the duo example, Kupp blocks Williams and seals a nice lane for the running back. In this video, Kupp sells the play by releasing inside the tight end as if he is blocking. Williams thinks run and puts himself way out of position. Kupp and the tight end both release to the same side, Kupp occupies the cornerback, and there is a huge chunk of field open for the tight end – the area Williams is responsible for. On this play, the Rams’ usage of Kupp in the running game creates a big play in the passing game.

In addition to boots and play action to complement the run game, the Rams most commonly use deep drop-back passing plays (43.8%) in their true pass offense. On these plays, they average 9.01 yards per play – 2 yards more than league average.

These plays rely on the ability of every member of the offense, starting with the offensive line.

Additionally, matchups end 1.5 seconds after the QB reaches his launch point. So if a defender “wins” after being blocked for 3 seconds, it’s recorded as a win for the offensive player. To put it simply, we’re looking for situations in which the defender is trying to get to the quarterback, and the context of the play dictates enough time for a matchup to occur.

It sounds complicated, but it allows us to better answer the opportunities portion of pressure rates. For instance, ESPN’s pass rush win rate measures how often a defender gets within a certain distance to the QB within 2.5 seconds, but it looks at all plays the same and doesn’t account for double teams, free rushes and cross-ups.

Myles Garrett was the leader in ESPN’s pass rush win rate at 28%, but if we’re looking at his win rate on one-on-ones, when he actually had an opportunity to rush the passer, he won 54.8% of the time. That’s a massive difference.

The strength of the Rams offensive line is the left side, where Whitworth and Edwards have been excellent. The right side is slightly patchier, but each player has been average or a little better.

The Bengals pass rush doesn’t have any real weakness, but neither does it have a real strength. Hendrickson is the best of the lot, but while his total wins number is seventh among edge rushers, his total opportunities was also third highest. So his win rate is not in the upper-echelon of pass rushers.

The Bengals brought an extra rusher only 17% of the time this year (the fourth-lowest average in the league), so their defensive philosophy is to rush four or fewer and play good coverage on the back end.

While the Rams boot and play-action scheme is a great way to get defenders into the wrong places, the drop-back game is where receivers are more simply asked to win routes.

The Rams were the best team at winning one-on-one matchups offensively in 2021. These are measured against both man and zone coverage. Against man, it’s all about how a player creates separation. Against a zone, it’s slightly more complicated, as it relies on a combination of creating space but also finding space where you can catch and make a move.

Against man coverage, here’s how the Rams’ top route runners fared. On average, WRs win 33% of the time and TEs win 24% of the time.

Perhaps it’s no surprise that Kupp finished first overall among WRs when it came to beating man coverage, while Beckham finished in the top 20 as well. Having one route winner is fine, but when there are multiple players on the field who can win against man coverage, it really limits what defenses can do.

The Bengals could be in trouble if they rely on their defensive backs to go man-to-man against the Rams receivers. Los Angeles runs a lot of four-man routes, which would put Eli Apple, Chidobe Awuzie, Mike Hilton and Vonn Bell in man.

Awuzie is the Bengals’ best corner, but none are the shutdown defenders that are needed to hold up against the Rams receiving corp.

The Bengals will likely spend most of their time in zone coverage, and they have a penchant to mix and match zone coverage types from play to play. Their most successful zone coverage types are all middle-of-the-field-closed (MOFC) types, which means there’s a deep safety in the middle of the field. In the Bengals’ case, it’s almost always Jessie Bates III.

These MOFC coverage types are traditional Cover 3 or Cover 1 coverages. These also allow for an extra defender in the box against run plays, but they also put a lot of stress on the outside cornerbacks to cover receivers one on one. The alternative is split safety coverages, which are Cover 2, Cover 4 and Cover 6 variations.

During the regular season, the Rams were held to under 250 passing yards four times: the San Francisco 49ers twice, Seattle Seahawks and Minnesota Vikings. These three teams all play split safety coverages much more than MOFC coverages. That might come as a shock to Seattle fans, but the Seahawks deviated from their traditional Cover 3 defense this year.

The counter is that the Bengals played their worst defense in split safety coverages. They were more than 2 yards worse on a per play basis than NFL average when playing either Cover 4 or Cover 6.