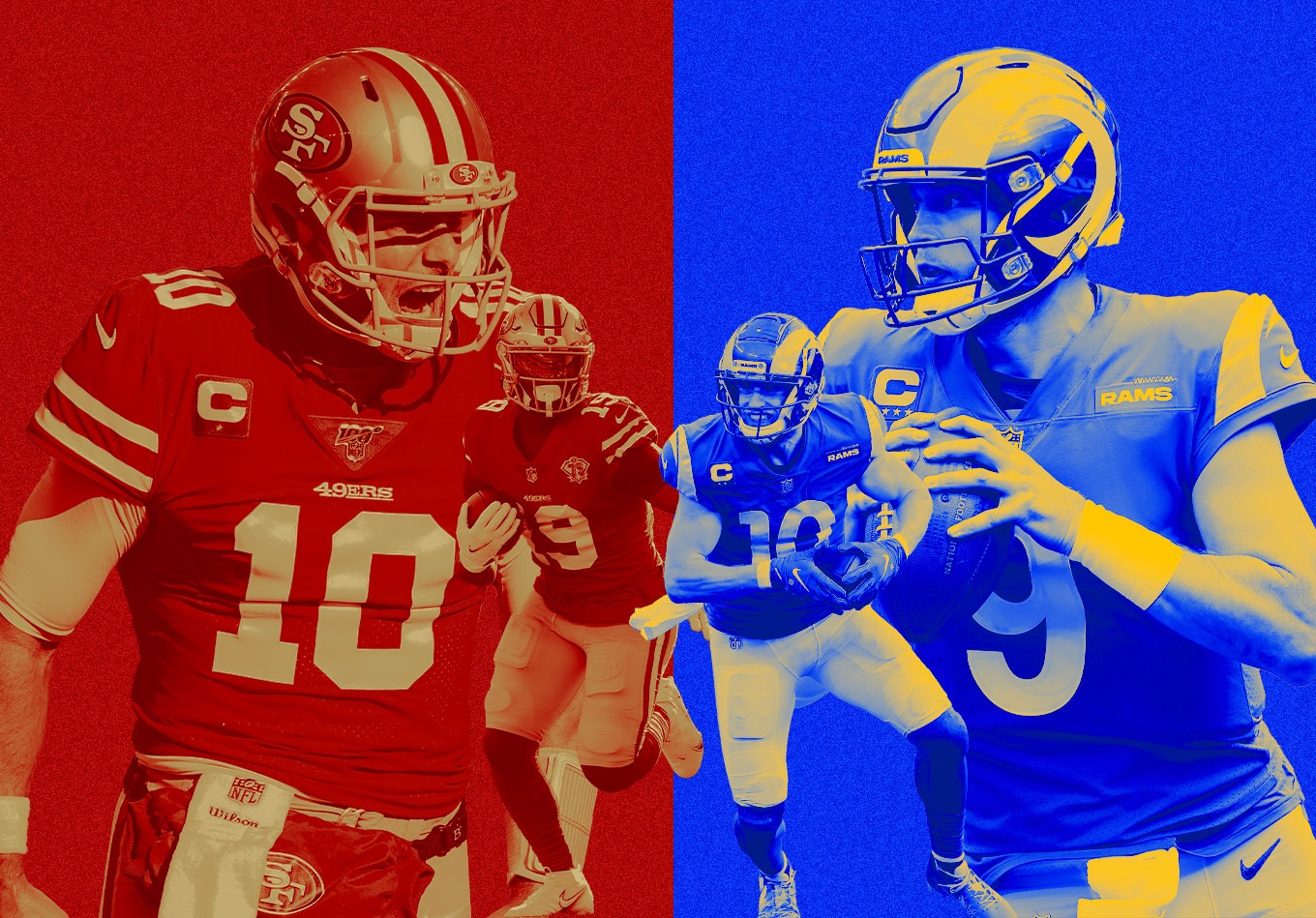 OK, so maybe it wasn’t ancient Greek philosophy that bore the quote that invariably pops up during certain NFL playoff cycles, countless high school basketball state tournaments, and the long-awaited sequel to Little Giants that remains in progress on my Google Drive.

You can bet it was a hot topic on the New York radio airwaves before the 1983 AFC championship game, when the Jets tried to avoid a third loss against the Miami Dolphins (they didn’t), and again four years later when the Giants attempted to finish off a three-game sweep of Washington in the NFC title game (they did).

As those two instances might tell you, our football cliche in question is a football myth. Since the 1970 AFL-NFL merger, there have been 22 playoff rematches between teams where one team won both regular season meetings. The team that did the sweeping has won 14.

Sean McVay has a bit of a Kyle Shanahan problem. McVay spent four seasons as an offensive assistant working under offensive coordinator Shanahan in Washington in the early 2010s, and the two buddies have been reunited twice a year since they took over half of the NFC West in 2017.

McVay’s Rams won three of the first four meetings, putting up 128 points in those victories and only losing a meaningless Week 17 game in 2017. Since then, Shanahan’s 49ers are 6-0. The Rams’ 31 wins over the last three seasons are tied for the most of any team to ever get swept by a division rival throughout that same span.

There’s a bit of recent encouragement on that list for the Rams, a 3.5-point favorite in Sunday’s NFC championship game, of course. The Buccaneers are 0-6 against the Saints over the last three regular seasons, but took them down in New Orleans when it mattered most – in last season’s divisional round en route to Tom Brady’s seventh Super Bowl title.

The team that swept the regular season series has been favored in eight out of the last 10 rematches since 1999, and the sweeper is 7-3 in those contests.

The lone underdog sweeper of the 2000s in that format was the 2004 Rams, who beat the Seahawks twice but were four-point underdogs at Seattle in the wild-card round (they also won that one 27-20).

The previous underdog sweeper before those Rams? The 1999 Tennessee Titans, who were 15-3 by the time they met the 15-2 Jacksonville Jaguars in the AFC championship game. That’s right, the two-loss Jags were perfect except for when they faced Steve McNair and the Titans. They had a plus-179 point differential, while Tennessee’s was just plus-68.

The whole “hard to beat someone a third time” maxim may have added a little extra oomph to the spread, which saw Jacksonville favored by seven. The Jags turned it over six times in a 33-14 loss as the Titans continued their dominance of their AFC South rivals. Jacksonville had 26 turnovers in 18 games that season – 13 of which came in their three contests against Tennessee. The Jags, who still haven’t made it to a Super Bowl, certainly remember those Titans.

So what can the Rams do to turn the tide against the 49ers on Sunday, aside from trying to keep San Francisco fans out of SoFi Stadium?

The 49ers have used their offensive versatility to keep the powerful Los Angeles offense off the field. San Francisco has run 47 more plays than the Rams over this six-game winning streak, holding the ball for an average of nearly 10 minutes longer per game.

Shanahan’s team kept it for a season-high 39:03 in a 31-10 home win over L.A. in Week 10. That included an 18-play, 93-yard drive on the 49ers’ first possession that culminated in an 8-yard Jimmy Garoppolo-to-George Kittle touchdown pass.

There was an 11-play, 91-yard TD drive later, but despite loving a good, old-fashioned quarter-eating drive, San Francisco is also one of the league’s most explosive offenses. The average 49ers scoring drive in 2021 took 7.65 plays – only the Cincinnati Bengals (7.53) and Seahawks (6.91) needed fewer snaps to finish off successful possessions.

The Rams know what’s coming with a San Francisco offense that uses pre-snap motion more than any team in the league – but that doesn’t make it any easier to stop.

Up 17-0 late in the second quarter on the 49ers in Week 18, the Rams pinned San Francisco at their own 15-yard line with 38 seconds left in the half. Four Garoppolo completions later and the 49ers got in position for a Robbie Gould 42-yard field goal to get on the board.

It took the Niners seven plays to really get back in the game on the opening possession of the second half, rolling down the field before Deebo Samuel’s 16-yard TD run made it 17-10. One Rams three-and-out later and San Francisco let Garoppolo basically put his feet up on the drive that tied it. Ten consecutive runs to start that possession looked like it would turn into 11, but instead what appeared from the snap to be a Samuel sweep turned into the 49ers’ electric skeleton key throwing a 24-yard touchdown pass to Jauan Jennings.

Even after digging itself out of that 17-point hole, it looked like San Francisco was going to be kept out of the playoffs thanks to New Orleans beating Atlanta 2,000 miles away. The Rams led 24-17 at the two-minute warning, and on fourth-and-18 from his own 17, Shanahan decided to punt the ball back to Matthew Stafford and Co. with three timeouts in his pocket. Three Sony Michel runs totaling five yards later, the 49ers would get one more chance to go 88 yards in 1:27.

Turns out they only need 56 seconds. Garoppolo took San Francisco right down the field, with Samuel’s 43-yard catch and run opening the door for Jimmy G to find Jennings for the tying score with 31 seconds to play. The 49ers locked up their playoff spot in OT, and now they’re back at SoFi because the Rams couldn’t finish them off when they first had the chance.

San Francisco had seven big plays, defined as a gain of 20-plus yards, from the last 20 seconds of the first half through overtime. The Rams allowed one QB all season to go above 9.0 yards per attempt in a game – Garoppolo, who did it twice.

No team had more of those big gainers over the last half of the season.

Those explosive plays have been missing so far in the playoffs, with San Francisco notching just three 20-plus yard gains from scrimmage in its wins over the Cowboys and Packers. Was a little bit of regression coming, or was that more likely a result of playing less aggressively while holding a lead in Dallas and, um, that balmy winter weather in Green Bay?

The Rams were third in the league with 65 big pass plays (15 more than they had in the final season of the Jared Goff era), but they were 30th in explosive run plays with just three. They fell behind too quickly in Week 10 to make a concerted effort on the ground, then had 27 carries for just 64 total yards in the Week 18 loss.

It’s not just that Los Angeles could use some more consistency in the running game, but McVay’s team may have learned a lesson in Week 18 about going too conservative. From the time the Rams took their 17-0 lead in the second quarter until the end of regulation, they had 12 plays on first down. They ran the ball on nine of those, netting three yards or fewer on six of them. Their lone scoring drive began with a run, but it was something more creative – a jet sweep to Cooper Kupp that gained 18.

Fast forward to last week’s divisional round win in Tampa that nearly became one of those Tom Brady comebacks that you read about on the tombstones of mere mortals (28-3*! Sorry, Falcons fans. … *paces nervously* … Kyle Pitts is good!).

Fortunately for the Rams, 27-3 won’t live in infamy, but it easily could have. In the second half, Los Angeles ran it on 10 of 14 first downs before the Bucs’ tying touchdown with 46 seconds left. The net total gained was 11 yards. Sure, it never gets truly hairy without those three second-half fumbles, but going into an offensive shell didn’t help.

Both L.A. (4.73) and San Francisco (4.71) ranked in the top 10 in yards per carry on first down during the regular season, but that number plummeted for the Rams in the head-to-head matchups (see below).

Overall, these were incredibly efficient offenses during the regular season. The 49ers and Rams ranked first and second, respectively, in offensive EVE, our team efficiency metric that compares success on every single play to a league average based on situation and opponent.

Blitz either passer at your own peril, as both teams are well aware.

Stafford had the highest passer rating against the blitz (129.6) of anyone this season, throwing 14 TDs against just one interception. Garoppolo was second (128.7), with seven TDs and one pick while averaging 10.6 yards per attempt. The Rams bring pressure at the ninth-highest rate in the NFL, while the 49ers send extra help at a bottom-five rate.

This isn’t just the Rams’ third attempt in a season to solve San Francisco. It’s Try No. 7 in a stretch of futility that included Nick Mullens walking away in victory at SoFi in November 2020.

They could have laid the beast to rest with one stop or one first down three weeks ago at their new state-of-the-art home, and now the setting is the same with the stakes much higher: The winner gets to return to SoFi for the Super Bowl in two weeks, while the loser will be free to offer 72 hours of unpaid dancing services to the world’s most profitable annual sporting event.

In other interesting tidbits that don’t mean much, the Rams are the third team since the league expanded to six playoff teams in 1990 to host a conference championship game after winning on the road in the divisional round. The previous two (the 2006 Indianapolis Colts and 2008 Arizona Cardinals) took care of business at home.

Third try’s a charm, lucky No. 7 – however you want to frame it, the Rams aren’t going to beat the 49ers because they’re due.

If it happens, it’ll likely be because they disguised some dropbacks to limit Garoppolo and the 49ers’ offense from attacking the middle of the field as they do so well. Or because the offensive line held up against Nick Bosa and San Francisco’s formidable front, forcing DeMeco Ryans to blitz more and allowing Stafford time to find Kupp, Van Jefferson and Odell Beckham Jr. down the sidelines. Or because a fresh Cam Akers put his multiple-fumble game in Tampa behind him and found some holes that helped Los Angeles keep the 49ers from dominating the possession game once again.

If it happens, it’ll be because McVay finally outschemed his former boss.

According to various motivational quotes across the internet and the overlords at Pinterest, Buddha (possibly via Wayne Gretzky by way of Michael Scott) once said, “Your worst enemy is your best teacher.”

On Sunday, we’ll get a good idea of how much McVay has learned.