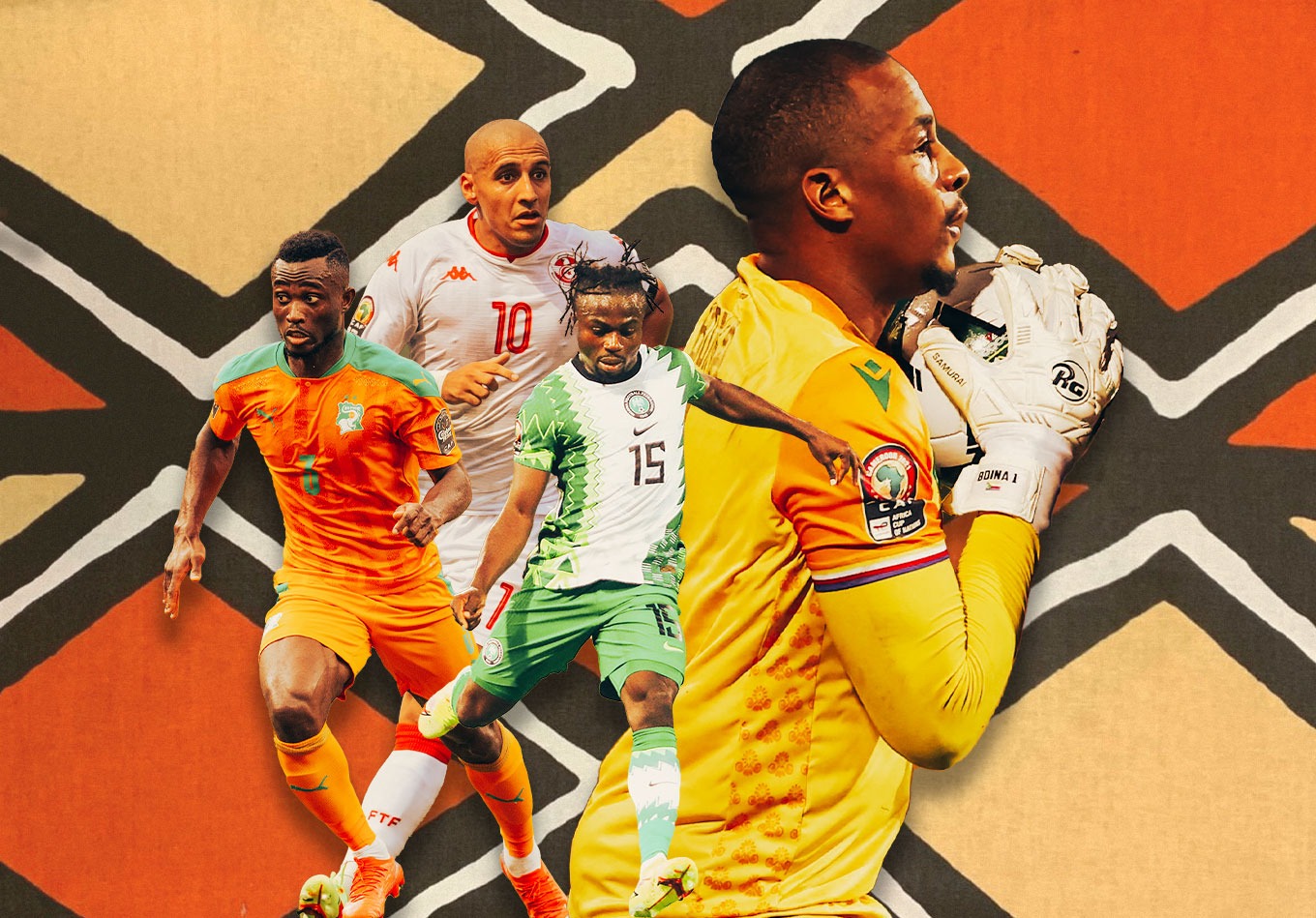 You’ve already read the first number twice in the headline, but good things come in threes and this time it refers to Nigeria’s shots on target from inside the box. Nigeria’s 16 are more than any other team, and it’s more than the total shots on target of any team not named Ivory Coast. The Super Eagles haven’t messed around much from range with their 15 shots attempted from outside the box ranking joint 10th.

The result is quality scoring chances with an average value of 0.15 xG per shot, which is third (Morocco lead with 0.18). Cameroon scored a goal more than Nigeria in group play, but the Indomitable Lions also outperformed their xG considerably (seven goals, 4.81 xG), whereas Nigeria are yet to really finish all that well (six goals, 7.18 xG). If the Super Eagles do that, they’re surely going to win a shiny object on February 6.

Senegal are the only team at the tournament yet to concede, in part because they’ve had the ball more than any team in the Last 16 (63.6% possession). They’ve faced three shots on target – none successful – so it seems bad things can also come in threes. But the problem is Senegal have…

… goal scored, and that came via a Sadio Mané penalty back on Matchday 1. That came deep into stoppage time, so Les Lions de la Téranga have only led for 1% of the tournament:

In summary, we’re 270 minutes into the tournament, and we’re yet to see a non-penalty goal in the games involving one of the tournament favourites, which, let’s face it, is pretty boring to even those of us who aren’t quite as turned off by football binaries.

It’s just that we don’t know how much more we can endure. In three matches, the combined xG for and against for Senegal is 5.51, the second-lowest figure in the tournament. They’ll play Cape Verde on Tuesday. The combined xG and xG against for Cape Verde is 5.68, or fifth lowest, so we might be starved for goals yet again here. Someone tell Senegal the 1-0 AFCON era ended like two weeks ago.

The highest chance of advancing to the quarter-finals belongs to Morocco. Nigeria were our pre-tournament favourites and remain our tournament favourites (17.0% now, down from 20.3% before the last fixtures of Matchday 3), but Morocco’s Last 16 fixture with Malawi is not one to complain about. Nigeria were supposed to get a great draw for the last 16 against a third-place team, but the dramatic ending to Group F with Gambia’s stoppage-time goal made that third-place team Tunisia. That complicates Nigeria’s path with a 61.2% chance of reaching the quarters. It’s one of those Round of 16 matches with a semi-final feel – assuming Tunisia get some players back from Covid-19.

Morocco have been active without the ball, which we see in the passes per defensive action of their opponents. The 6.7 average is the lowest at AFCON 2021. High up the pitch, it’s resulted in 24 high turnovers, which ranks third:

Five have resulted in shots (joint third), and they’ve scored one of the two goals off a high turnover at AFCON 2021. They’ve had the second-most pressed sequences (48), and as a result, their sequence start distance of 45.9 metres from their own goal is the farthest advanced up the pitch in the tournament. Visual experts will have noted that more of that pressure is happening on the right, and that could be a problem for Round of 16 opponents Malawi, whose opponents have generally won the ball back from them on – you guessed it – the right:

Tunisia’s Wahbi Khazri has been involved in three goal-ending sequences, which is the joint tournament lead despite playing 170 minutes. The xG amassed from the sequences he’s been involved in totals 2.32, which among players still in the tournament trails only Taiwo Awoniyi (2.55). This is particularly important because the Saint-Etienne attacker missed Tunisia’s third match due to Covid-19, and without him they lost to Gambia and slipped to third in Group F. If they’re without him again, Nigeria’s seemingly difficult last 16 draw gets a bit easier, unless this next guy falls ill…

Moses Simon has 15 successful take-ons at the tournament, which is more than five entire teams that ideally play with 10 outfield players at once. To put this in perspective, next-best Bouna Sarr has 10 and noted footballer Sadio Mané has eight. We featured Simon in our pre-tournament players to watch, and if you haven’t taken Matt Furniss’ advice, you’ve missed out on perhaps the tournament’s most exciting player to date. At Euro 2020, only one player had more than 12 successful take-ons. It was Raheem Sterling, and it took him 641 minutes to get his 20.

Those who claimed Nigeria were a team of forwards before the tournament and weren’t serious contenders because of it need look no further than the midfield pairing of Wilfred Ndidi and Joe Aribo. Ndidi leads the tournament with 32 recoveries. Next best is Steeve Yago (27) of Burkina Faso.

Ndidi’s nine successful tackles are also the tournament lead. In the Premier League, Ndidi ranks fifth per 90 in recoveries (9.15) and is tied for 11th in tackles won (2.00) this season – a down season for Leicester, that is. It’s just what he does, and he’s doing it for Nigeria quite well.

Equatorial Guinea have seven players with multiple chances created from open play. That’s joint most with Ivory Coast and Cameroon, two teams that have had a lot more of the ball than the National Thunder. It hasn’t resulted in much scoring yet (two goals), but their xG (4.02) is better than average and twice their actual output, so there’s reason to believe more production is coming. José Machín and Pablo Ganet finished the group stage with five open-play chances created each, and if you merge the locations of their bodies of work like you’re recreating Pangea, you’ve got some pretty thorough pitch coverage in the attacking half:

As mentioned, Equatorial Guinea have managed to spread this chance creation out without having much of the ball (42.8% possession). It figures they won’t have much of the ball against their next opponent either…

We posited Mali as dark horses before the tournament. Turns out they might just be horses. Mali have the best passing accuracy at the tournament (86.2%) and the fourth-highest possession among remaining teams (59.9%), but the terms “passing accuracy” and “possession” can for certain sides be nice-talk for “inconsequential lateral passes.” There’s a difference between having the ball and being good at having the ball, so this probably deserves a closer look at their sequence details: Mali have the second-most sequences of 10 or more passes (30), their 3.98 passes per sequence are the most at the AFCON, and the starting point of their sequences is the fourth most advanced (42.7 metres from their own goal).

The average distance gained of their sequences is 17.4 metres, which is nearly 1 1/2 metres more than the next-best team in the last 16 (Ivory Coast, 16.1). So, these sequences are comparatively progressive. Let’s not make the mistake of tossing Mali in the inconsequential possession bucket the way we may be inclined to with Algeria (time’s up), Senegal (time to show up) and Egypt (time to counter?) so far. Mali’s 5.95 xG is higher than all of them, and Les Aigles have the second-most shots (47) at the tournament behind Nigeria (48). Oh, and Mali’s sequences are lasting 11.18 seconds on average, which is second to Cameroon (11.22) by a fraction of a second. If you think that last sentence didn’t add much to the overall point, you’re right but you’re not thinking about data-driven writing transitions: Speaking of Cameroon…

Talk about a great knockout draw so far. The hosts’ Round of 16 opponents are 132nd in the latest FIFA rankings. As it’s playing out, Cameroon’s path to the semis isn’t too bad either with the Guinea-Gambia winner in the quarters, so their chances of being one of the last four teams is now 40.4%. That’s third behind Senegal (50.9) and Nigeria (44.2). At the start of the tournament, the Indomitable Lions had a 19.6% chance of reaching that stage, but the road to Stade Ahmadou Ahidjo is clearing in front of them and their chances of winning the tournament have doubled.

Comoros have the worst xG difference (-4.00) not only of the last 16 but of all 24 teams in the tournament. You can complain, or you can embrace this as the beauty of the 24-team format. No other team advanced with even half that (Malawi next worst at -1.86). Comoros have four shots on target in the tournament with three goals, a ratio that Algeria (15 to one) will either: a.) smile politely at, or b.) need a head doctor for. So how does a team progress with that kind of xG difference? Quality goalkeeping is a start…

Salim Ben Boina has saved Comoros two non-penalty goals for the highest goals prevented mark in the tournament. Only Babacar Diop of Mauritania and Sierra Leone’s Mohamed Kamara have faced more expected goals on target. The below graphic excludes penalties, and we all know Ben Boina stopped one of those as well.

To give this some context, no keeper at Euro 2020 prevented more than 2.5 – Czech Republic’s Tomás Vaclik in 450 minutes.

If you’re interested in how Ivory Coast have progressed the ball up the pitch, have we got a number for you. Reims left back Ghislain Konan is frequently a big part of it. His 20 carries of 10+ metres are the most in the tournament, ahead of Nigeria duo William Troost-Ekong (19) and, of course, Moses Simon (18), and Guinea -Bissau’s Opa Sanganté (18).

Egypt knew they were likely in for a tough Round of 16 draw if they were unable to win their group because they would be matched against the winners of Group E. Had you told them that would actually entail Algeria finishing last, they probably would have felt better about it. But that still left Ivory Coast, and Ivory Coast have had stretches of play in which they look like a team that could win the tournament. That said, Ivory Coast’s 4.68 xG against is seventh worst in the entire field and only better than Comoros (5.85) and Malawi (5.37) among last 16 qualifiers. That gives a bit of hope to an Egyptian side that has played it rather tight with limited chances. Their 2.82 xG is fourth lowest among Round of 16 teams ahead of Comoros (1.85), Gabon (1.99) and Gambia (2.02). Egypt do, however, have perhaps the best finisher in the competition (world?), and Mohamed Salah already showed against Guinea-Bissau it only takes him one decent chance to win a game. Speaking of limited chances…

Seventeen is a prime number, 24 is anything but a prime number, and when you divide one by the other you get 0.70833333333and so on forever. Will Gambia go on forever as well? Likely not. Here’s why. That 24 is their total number of shots – second to last among remaining teams. That 17 is their number of shots from outside the box – way too many given they have only attempted 24 shots. So 70.8% of their shots are coming from range, which is of course the highest mark at the tournament. If you don’t believe us, we’ve unearthed a map to support the claim:

Compare that^^^ to Nigeria’s graphic all the way back at the top, and you’ve got on-pitch representations of the difference between a side with a 17.0% chance of winning the tournament and one with 0.5%.

Relatively few shots, and most of them coming from outside the area: winning should not be sustainable under such conditions, but that’s what 120 minutes of 0-0 followed by penalties is for, right? And if it comes to that, every neutral fan will be pulling for the 150th-ranked team in the world. Again, your options are to complain or embrace the beauty of the cup. Surely there’s more of it to come in the knockout stages. We can’t wait. 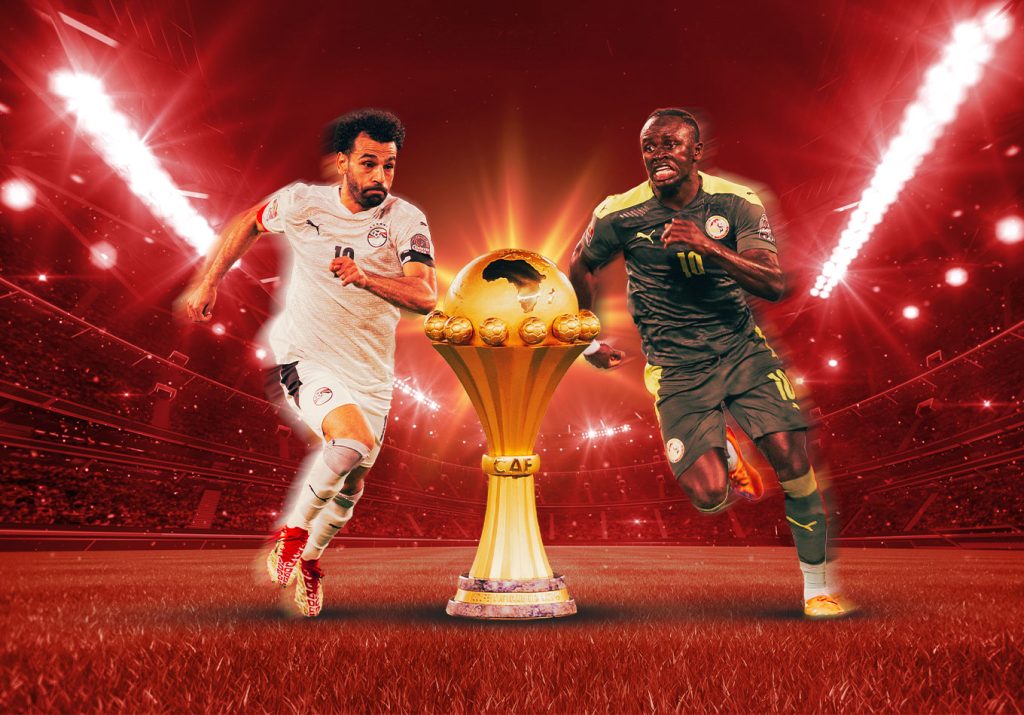 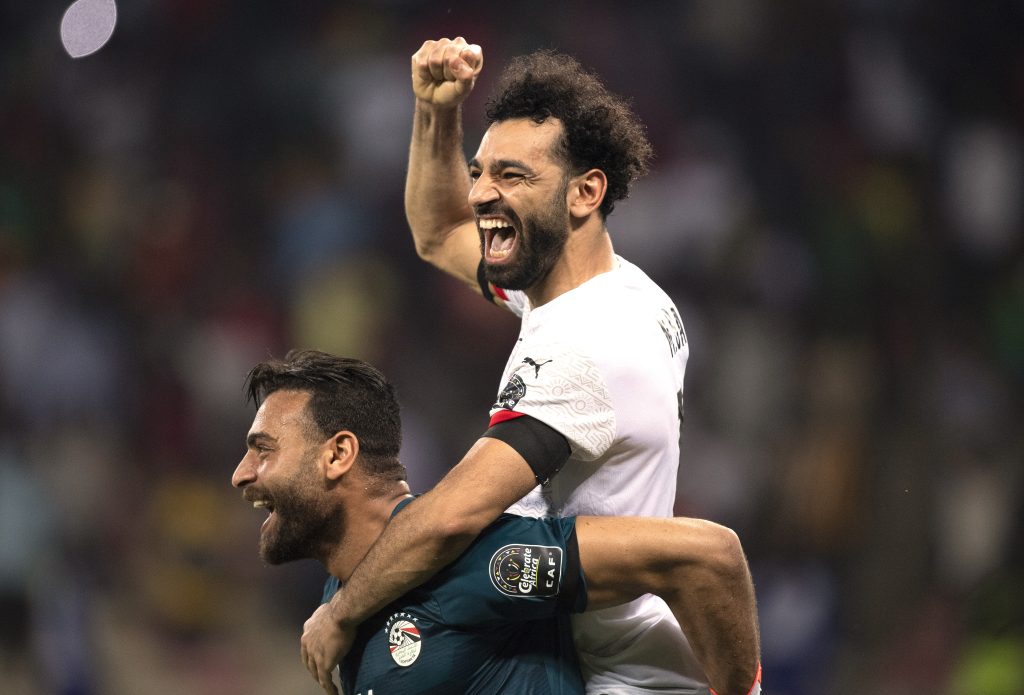 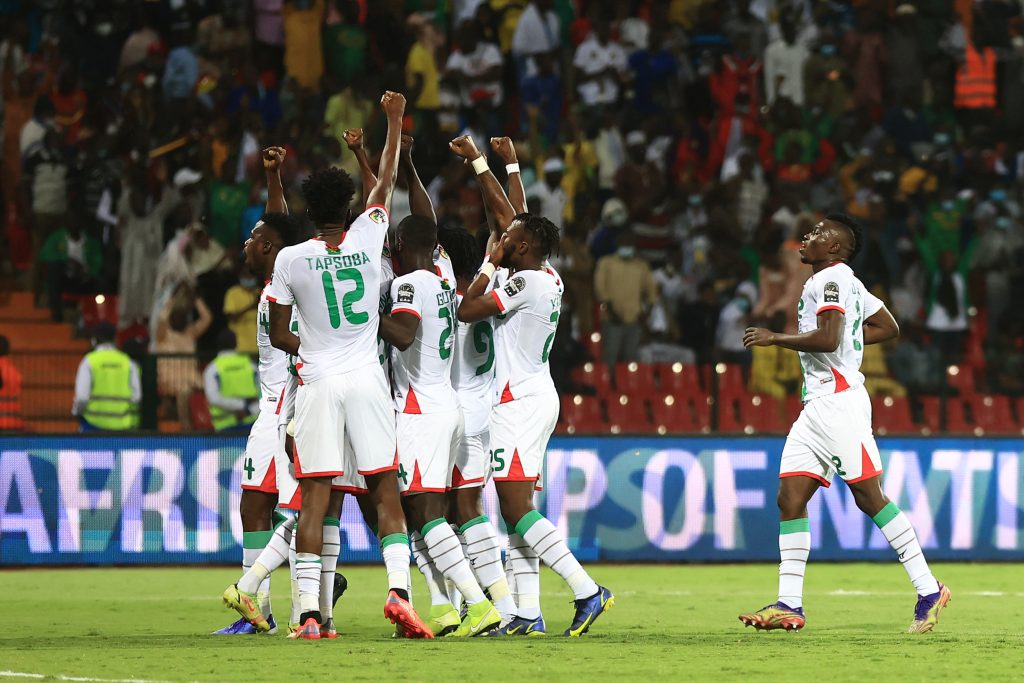