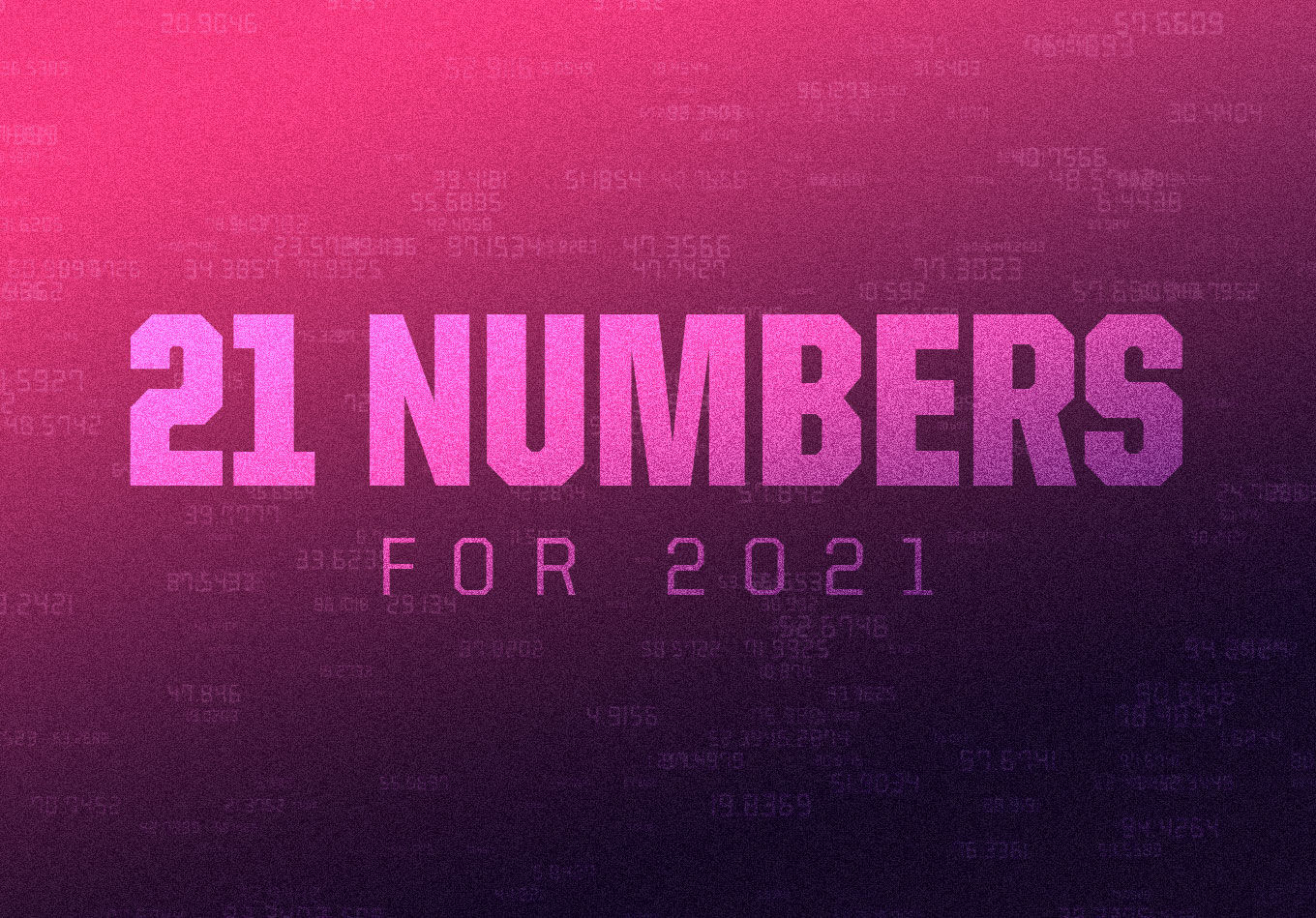 The year 2021 was a chance for the world to return to normality.

There were some familiar things as an old G.O.A.T. led a pirate charge to treasure as light blue ruled in England but dark blue stormed across Europe. But there were also some long-forgotten sights, with a Brave 26-season wait for success coming to an end after the Hammer sounded for one last time.

And how about something new as the Greek Freak proved there’s life without super teams before a new 3-point king was later crowned. A qualifying star was also born in the Ashe and The Analyst showed you how to take delight in the detail.

The big events of 2021 – there were plentiful. But here’s some of the numbers and data you may have missed along the way, chosen by your leaders in data-driven storytelling.

(All numbers updated through Dec. 29)

HOCKEY/AMERICAN FOOTBALL: Championships between the Tampa Bay Lightning and Buccaneers in 283 days after the Lightning wrapped up a 4-1 series win over the Montreal Canadiens in the Stanley Cup Final on July 7. It marked the shortest time span for a metro area to win three titles in MLB/NBA/NFL/NHL since Detroit won three (Tigers, Lions, Red Wings) in a span of 188 days in 1935-36. Tampa also ended up with the 10th-best average win percentage of all time over a one-year span.

RUGBY: French players to be named the Men’s 15s Rugby Player of Year after Antoine Dupont joined Fabien Galthié and Thierry Dusautoir. Dupont also helped Toulouse win the TOP 14 and Champions Cup double, the first time the club had managed this since the inaugural Heineken Cup season back in 1995-96.

BASKETBALL: Draymond Green’s NBA ranking in defensive DRIP (D-DRIP), our player rating system. The Warriors are tied for the league’s best record, anchored by early MVP frontrunner Steph Curry’s otherworldly offense. While the Warriors’ impressive 109.9 offensive rating is doing a lot of the work, their far-and-away league-best 99.6 defensive rating has come as a shock to some.

BASEBALL: No-hitters in Major League Baseball in 2021, breaking the previous record of eight set in 1884. There were seven no-nos within the first eight weeks of the season if you include Madison Bumgarner’s seven-inning gem on April 25 (an official no-hitter must go at least nine innings). Even the six “official” no-hitters were the most we had seen before June in a single season.

GOLF: Strokes gained over PGA average by Bryson DeChambeau in the second round of the 2021 BMW Championship. It was the best single-round performance of 2021, as DeChambeau shot a bogey-free round of 12-under highlighted by a pair of eagles. He would end up second in the tournament, losing to Patrick Cantlay in the sixth hole of a playoff.

AMERICAN COLLEGE FOOTBALL: Consecutive completions to start the Big 12 championship game for Baylor quarterback Blake Shapen against Oklahoma State on Dec. 4. He became the first Power-5 QB to start any game with such a streak in the past 10 seasons.

RUGBY: Consecutive wins for England’s Red Roses, their best run since winning 21 on the bounce between 1992-97. This run includes two wins against New Zealand and seven against France, the second- and third-ranked sides in the world, respectively. They’ve averaged 42 points scored and just nine conceded in this run, which started in November 2019.

CRICKET: Wickets for Tash Farrant, the most of any player in either the women’s or men’s edition of the inaugural season of The Hundred. Farrant helped the Oval Invincibles win the women’s edition of the tournament. She not only took the most wickets but also induced a ‘False Shot’ from 37% of the deliveries she bowled. Only teammate Marizanne Kapp managed a better rate than this (42%).

TENNIS: Grand Slam titles for Novak Djokovic, who won three in 2021 (Australian Open, Roland Garros and Wimbledon) to move even with Rafael Nadal and Roger Federer for the most in tennis history. He also reached his 31st Grand Slam final, equaling Roger Federer’s record in men’s tennis.

AMERICAN FOOTBALL: Consecutive wins in the month of November or later for Kansas City Chiefs quarterback Patrick Mahomes after he threw three touchdown passes for the second consecutive game in a 36-10 drubbing of the Pittsburgh Steelers on Dec. 26. It’s the longest such streak by any QB in NFL history.

AMERICAN COLLEGE FOOTBALL: The record number of games South Dakota State played in 2021 due to the 2020 FCS season mostly being delayed by the pandemic to the spring semester earlier this year. Like many FCS programs, the Jackrabbits had two schedules in the same calendar year.

CRICKET: Balls needed to score a half century in the final of the men’s 2021 T20 World Cup for Mitchell Marsh. It was the fastest 50 in a final of the tournament – surpassing the record set by Kane Williamson (32) in the first innings of the same match. Marsh went on to score 77* as he led Australia to their first men’s T20 title.

FOOTBALL: Wins for Manchester City in the 2021 calendar year, setting a record for the most in top-flight history. It goes three clear of Liverpool’s all-time English top-flight record set in 1982 and surpasses Chelsea’s previous Premier League record of 32 from 2005 under Jose Mourinho.

COLLEGE BASKETBALL: The number of games in which a team ranked in the AP Top 25 has lost to an unranked team so far in the 2021-22 season. Though it’s really not ahead of the norm due to COVID-19 cancellations and a weak December schedule, some of those games have ended in dramatic fashion. Perhaps none more memorable than Rutgers swingman Ron Harper Jr.’s shot from half court to beat No. 1 Purdue at the buzzer on Dec. 9. Creighton, Iowa State, Ohio State and Oklahoma are the only teams to have multiple such wins.

COLLEGE BASKETBALL: Houston’s TRACR rating, the best in the nation. A rating of 38.7 indicates that a team would beat an average team in Division I by about 0.39 points per possession. Given that there are about 70 possessions per game, that team would outscore the average opponent by about 27 points per game.

FOOTBALL: Goals in the Bundesliga in 2021 for Robert Lewandowski, beating Gerd Muller’s long-standing record (42) for the most goals in a calendar year.

AMERICAN FOOTBALL: Consecutive losses for teams when scoring in single digits against a starting quarterback with multiple MVPs (regular and postseason) before the New Orleans Saints put an end to that lengthy streak with a 9-0 win over Tom Brady and the Tampa Bay Buccaneers on Dec. 19.

TENNIS: Places risen in the WTA rankings, from No. 345 at the start of the year to No. 19, for Emma Raducanu. Amongst the current top 50 players, no one rose higher in the rankings this year than the young Brit. Her victory at the US Open saw her become the first qualifier to win a Grand Slam tournament in the Open Era, and the first British woman to win the US Open since Virginia Wade in 1968.

AMERICAN FOOTBALL: Career receiving yards for Jakobi Meyers of the New England Patriots prior to his first receiving touchdown on Nov. 14 against the Cleveland Browns. The only player with more receiving yards before his first career TD catch was running back Thomas Jones with 1,578.

BASEBALL: Games without a no-hitter in San Diego Padres history before right-hander Joe Musgrove finally broke through with his no-no on April 9. It was the second-longest run without a no-hitter in Major League Baseball history next to the Philadelphia Phillies, whose streak lasted from 1906-64 and 8,944 games.

AMERICAN COLLEGE FOOTBALL: The average attendance at Jackson State’s six home games this fall, a single-season record for an FCS school. The SWAC championship program is currently one of the most visible in the FCS due to NFL Hall of Famer Deion Sanders being the head coach.