Is Darius Garland Quietly Rising to Stardom in Cleveland? | The Analyst 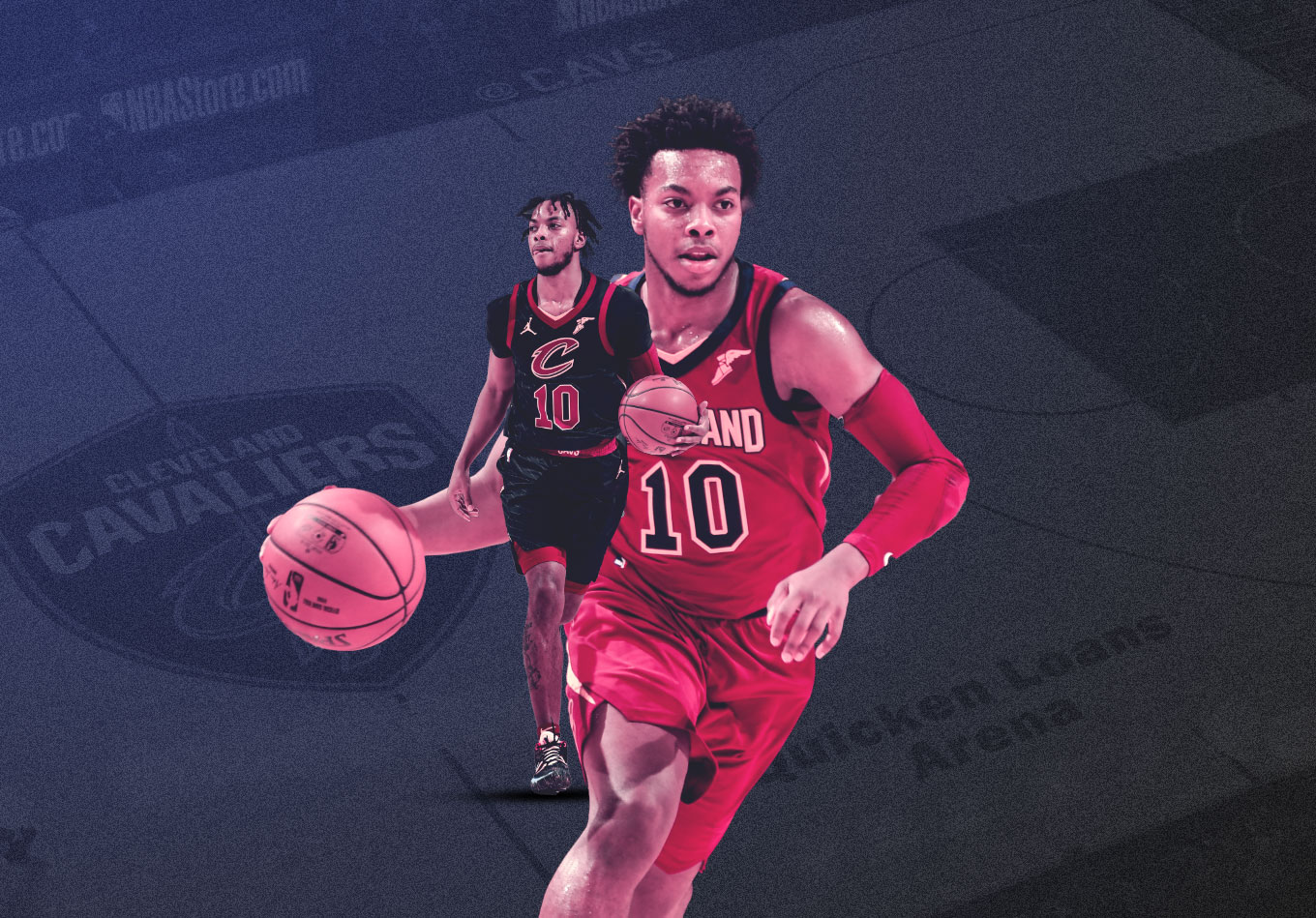 Is Darius Garland Quietly Rising to Stardom in Cleveland?

Believe it or not, we don’t yet know who’ll be the best point guard from the 2019 NBA draft.

It should be Ja Morant, riding his intrepid rim attacks, ball-screen sorcery and acrobatic passing to stardom. But Darius Garland assuming the label is entirely possible. He’s that good, showcasing the requisite skill-set to rival his contemporary. The summits are captivating, albeit often buried in the depths of NBA League Pass for a sluggish Cleveland Cavaliers squad.

These are not simply minor advancements expected of a young player as he familiarizes himself with the NBA. Garland, piece by piece, is beginning to tie together the splayed ends of an arsenal worthy of commandeering a high-level offense. Already, he’s one of the league’s preeminent passers – particularly to the interior – equipped with live dribble ambidexterity, manipulation and instantaneous processing.

The transition from dribble to pass is seamless for him. Lasers to cutters or diving rollers as he probes or drives, precise lobs to bigs, boomeranging it back to shooters on pick-and-pops – each style is within his comfort zone. Angles materialize, and boom, the pass is executed. He forces defensive rotations, eyes always scanning the floor for slivers of space, and proceeds, holstering deft touch and varying arm slots/speeds of delivery.

Interior passing is Garland’s expertise. Despite ranking 23rd in total assists, he’s 11th in assists at the rim. In fact, 55.4% of his assists occur at the rim. That’s the second-highest mark among the league’s top-30 dimers, behind only Stephen Curry (57.0). Garland’s slender frame, shiftiness and burst permit him to navigate cramped quarters inside the key, where he’s adept at generating paint points, the most valuable type of shots. They aren’t learned reads that tend to arise with reps and development. These are decisions that convey remarkable vision and skill for a 21-year-old lead guard in his second season.

While his undersized stature is a boon for interior playmaking, it can often be a constraint for his inside-out passing routes. He’s only assisted on 89 3s this season (64th in the NBA), regularly struggling in traffic or around size to thread the ball to shooters on the perimeter.

The Cavaliers rank 27th in 3-point rate and 29th in 3-point percentage, so their lack of emphasis and proclivity for floor-spacing contributes to Garland’s mark. Yet he’s less proficient in that realm because of his size, an unavoidable impediment that permeates throughout many parts of his game (more on this later). Although he’s still capable of live dribble skip passes in space, the inability to see over the top amid the trees or have the length to wrap passes around guys is evident. It prevents him, at least for now, from being an elite distributor rather than a very good one.

Just as Garland’s passing functionality does not align with his brief NBA tenure, his savvy in ball screens follows a similar theme. The dude is a virtuoso setting up picks and maximizing their utility against defenders. Footwork, change of pace, speed and deceptive handling prowess all enrich his craft. He brandishes the quickness and dexterity to reject screens when opponents overplay, can prime screens with his handle and mixes up the tempo to keep defenses guessing. Guys his age who carry such a sizable creation load are not typically as sophisticated as him in their understanding of how to blend skill and physical tools for advantages.

At this stage, the issue for Garland is not in how he fashions advantages off the dribble or with screens. It is how he capitalizes on them. The process, generally speaking, is sharp. Benefiting from that process, as well as some tweaks in decision-making, are how he becomes an actual pick-and-roll savant.

The most prevalent hurdles are contact aversion – though, he’s improving this one – and inadequate vertical explosion. He’s slim and a (somewhat) generously listed 6-foot-1. Traditional finishes are not the available, go-to option. Often, he either has to resort to gymnastics around the rim to convert or he’ll settle for floaters, avoiding any confrontation with long-limbed defenders.

Floaters are a novel component to keep in the back pocket, but Garland is known to treat them like a fastball instead of a curveball. Even if two or three of his rim attempts are swatted to the heavens each game, shots around the cup are going to be a more consistent source of offense inside the paint. Living with these possessions….

…. and trimming down these floaters is vital in achieving his scoring ceiling.

Torrid long-range shooting helps facilitate this jump, but Garland is making a concerted effort to prioritize shots conducive to increased scoring efficiency. Before the All-Star break, 42.5% of his shots were more than one foot from the basket while 26.8% were at the rim. Since the All-Star Break, just 33.2% of his shots are from the former region, while 31.4% are at the rim.

Newfound aggression and a willingness to seek out or embrace contact on drives is helping him frequent the foul line more, too. His post-All-Star break free-throw rate is .202, well above his pre-All-Star break clip of .130. He’s not seeking out the first shot inside the key that comes to him. Instead, he is probing, maintaining a live dribble and focusing on the rim, applying wits or physicality for profits. Efficient shots in the paint, not just shots in the paint, are his goal, and that is meaningful progress.

Garland is shooting better at the rim during this span – 59.5% vs. 54.4% – but the frequency is the more salient difference. Recognizing those shots will usually be the most optimal inside the arc and targeting them instead of challenging floaters or trying to spring free for mid-range pull-ups is important cognizance.

The reason paths to the paint are consistently available to him is because of his threatening jumper. He entered the league as a coveted shooter and knocked down 35.5% of shots from beyond the arc in Year 1. He’s hit 39.4% of his 3s during his sophomore campaign and is exhibiting aptitude off the catch and the bounce, hitting 43.5% of his spot-up looks and 35.7% of his pull-ups.

Blending his dribble-drive game and 3-point proficiency is crucial. Currently, despite his exploits from deep, he’s a bit gun shy at times, bypassing open looks off the ball or trying to penetrate instead of leveraging his burst and shiftiness for space creation. He cleverly leverages his shooting gravity for driving lanes. Now, it’s time to actually let it fly.

As a small-ish guard with strength deficiencies, opting to drive and draw help/size his way, rather than launching beyond the arc invokes the preference for a play-style tweak to upgrade his scoring efficiency. Displays of pull-up flair so early in his NBA career bode well for his developmental arc. But each instance feels as though it’s offset by an example in which he should be much more confident in the jumper and less confident in his 2-point success.

Striking the balance between pressuring the defense as a primary creator and tapping into his shot-making gene is a fine line, though. As he continues to download the nuances of his job title, it’s justifiable he’ll discover the proper balance of each responsibility and skill, highlighting more of this:

And less of this:

The onus of offensive growth can’t and shouldn’t rest solely on internal improvement from Garland. Cleveland’s infrastructure does not lend him much help, between a lack of capable secondary decision-makers/ball-handlers and schematic counters. Too often, a single action opens the possession and that’s that. There are few follow-ups or second-side sets in case the defense neutralizes Plan A. As a result, Garland is tasked with creating something from nothing, an expectation too lofty for him at the moment, which negatively impacts his scoring efficiency.

Acquiring another decision-maker, someone who offense can flow through in one form or another, is necessary to maximize Garland and Collin Sexton. Guys like Kevin Love and Larry Nance Jr. provide that dynamic but their timelines are not concordant with Garland and Sexton, nor have they proven to stay healthy for long stretches.

These young guards are quite skillful maneuvering off the ball. Garland is a viable off-movement shooter and empowering him to function downhill with a preconceived advantage maximizes the threat of his burst and jitterbug bounce. Acquiring a complementary playmaker with size would help amplify his offensive versatility.

Garland’s road to offensive stardom rapidly crystalizes when all of his abilities are linked together. The passing is already borderline elite, oriented toward a high volume of easy, close-in finishes. Pull-up shooting from 3 and gaudy rim frequency must be the bedrock of his scoring foundation. Personnel enhancements could ease the burden of his on-ball load. The vision is simple: a dribble-pass-shoot guard with standout burst, handling and cadence who approaches elite status as a facilitator and pull-up maestro. His size and length are suboptimal but can be mitigated by everything else he wields in his tool-kit.

The defense, however, is where the physical shortcomings can’t be overcome to similar degrees. Garland knows how to play defense and tends to do so, aside from ball-watching bouts of which most are guilty. He’s quick laterally and has been more physical this year, which helps him stay attached on the ball against like-sized assignments, and consistently fulfills off-ball duties on the weak side or at the nail. His instincts and quick hands allow him to frequent the passing lanes and yield 1.3 steals per 36 minutes. There are clear strengths on this part of the floor.

But simply, he doesn’t have the build to excel. He’s overpowered on the ball and concedes paint pressure, even when he stays in front. Whether it’s stunt-and-recover scenarios, closing out on shooters or zoning up between two guys on the weak side, he can’t efficiently cover ground or crowd guys to forge an impact.

Garland lacks length and strength, a recipe for defensive struggles. Many of his most damaging breakdowns are independent of his control, but they transpire nonetheless and don’t look easily correctable. Size matters.

Garland’s limitations will cap his defensive ceiling, serving as a hurdle between casting a positive influence with his lateral quickness and off-ball understanding. He has shown enough, though, to avoid the label of possession-crumbling bad, establishing a baseline level of competency. The metrics and impact will likely be notably poor. They will not be bottom-barrel.

When he plays for a team better equipped to spotlight his strengths and mask his flaws, he will certainly be tenable on that end. Plant him off the ball, encourage him to inhabit the passing lanes and avoid on-ball requirements. That is how he separates himself as bad, not very bad. These distinctions are relevant, particularly in conjunction with his vast offensive potential.

The pull-up shooting is blossoming. He’s a grandiose passer. His interior scoring approach is evolving for the better. A bevy of valuable facets are tangibly connecting that should make him a premier lead guard. Perhaps, it’s not good enough to garner the label of best point guard from the 2019 NBA draft, but it will render him an excellent, All-Star-caliber player nonetheless. And that time is soon coming.