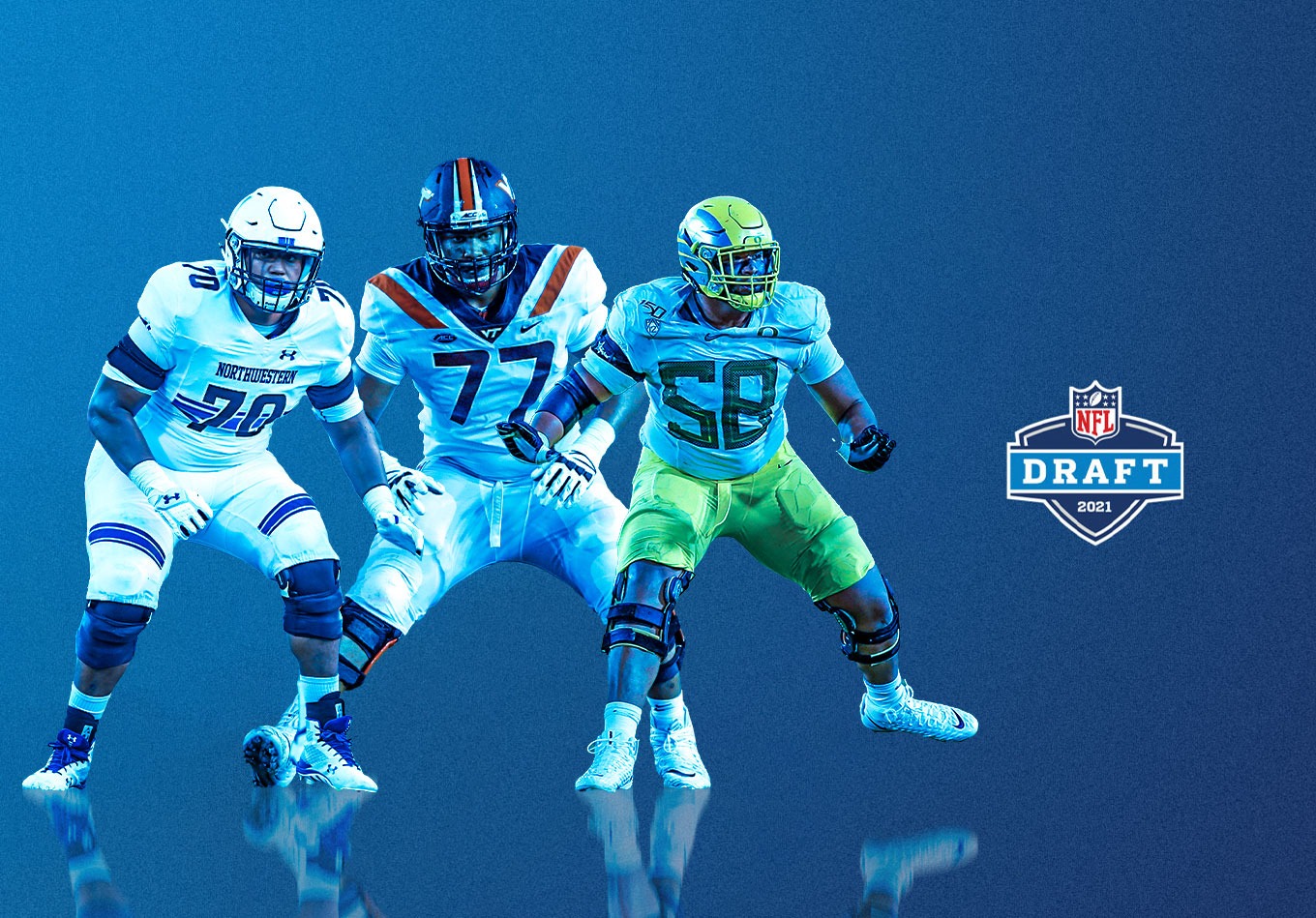 Battle in the Trenches: How the O-Line Prospects Size up With the Highly Touted 2020 Class

We’re just over a week away from a highly anticipated NFL draft. Leading up to the event, we’ll take a look at the most interesting players at each position. Today, we take a closer look at what could be an underrated group up front.

After the top-end offensive linemen of the draft class were celebrated in 2020, there just hasn’t been nearly the same hype surrounding this year’s bunch.

Four offensive linemen were snagged in the first 13 picks a year ago: Andrew Thomas by the New York Giants, Jedrick Wills Jr. by the Cleveland Browns, Mekhi Becton by the New York Jets, and Tristan Wirfs by the Tampa Bay Buccaneers.

Even though that isn’t likely to be the case again next week, there are four or more linemen who could be selected in the first round. Let’s see how they compare to their counterparts and see if the 2020 class was all that much better at the top:

In last year’s draft, Tristan Wirfs fell to Tampa Bay at No. 13, but there’s no question through Year 1 what offensive tackle made the biggest impact in his rookie year. A year after being the best OT in the Big Ten, Wirfs was one of the best right tackles in all of the NFL, specifically in pass protection with pressures allowed on just 5.3% of his pass snaps.

There’s little question the second best offensive tackle in 2019 was Northwestern’s Rashawn Slater. Slater was a stone wall, getting beat in conference play just three times on 171 pass protection snaps, and only 12 times in 252 run blocking snaps. He opted out of the 2020 season due to COVID-19 concerns, but based on his improvement as a starter his first three years in Evanston, there’s no reason to think he hasn’t progressed.

Much like Wirfs, there had been some speculation that Slater could be a better fit at guard. However, that seems to have passed and he should get a chance at tackle wherever he ends up. He isn’t quite as big or athletic as Wirfs was at this point last year and Wirfs out-performed him in the same conference in 2019, but that’s more a testament to how special Wirfs is and not a knock at all on Slater.

Mekhi Becton was a popular talking point before the 2020 draft. There was plenty of discussion over whether Louisville’s behemoth left tackle was a little too raw or if his size and skills would turn him into an elite blocker in the NFL. The Jets scooped him up at 11 and have to be very happy after one season. Becton immediately jumped into the top 20th percentile of NFL left tackles with a 5.5 pressure-allowed rate with above-average run blocking. He appears to be on his way toward becoming an elite left tackle for the next decade.

While somehow still giving up 2 inches and 30 pounds to Becton at draft time, Penei Sewell is a large human himself at 6-foot-5, 330 pounds. He was a terrific blocker at Oregon, allowing pressures on under 4% of his pass sets in 2019 Pac-12 play. His run blocking numbers weren’t quite as elite as one may expect. He was beaten on 6.8% of run plays in Pac-12 action, which was better than the 8.9% league average but not as dominant as one might expect for a projected franchise OL. His profile is very similar to Becton’s was in terms of impressive size and strength, and while they may have allowed more disruptions than their scouting profiles would indicate, the positives and highlight blocks show how high the upside really is.

As unique a prospect as Becton was and even with the success he has had so far, Sewell was even more impressive against better competition in 2019, and he did it at a younger age. Both players may be battling it out for All-Pro selections year after year, but we’re giving the slight lean to Sewell.

Jedrick Wills Jr., who went 10th overall to the Browns last year, made the transition from being a two-year starter at right tackle to Cleveland’s left tackle in his rookie season. The switch went quite well, as Wills ended up being in the top half of NFL pass blocking LTs despite struggling a bit in the run blocking game. Still, for a rookie moving to a new position on the line, there’s plenty of reason to be hopeful for Wills’ career as a quality protector for Baker Mayfield.

Teven Jenkins doesn’t come with the same hype that Wills did, but his performance on the field speaks for itself. For two years running, the Oklahoma State Cowboy has been the top tackle in the Big 12 – both in pass protection and run blocking. After leading the conference in pressure rate-allowed and finishing second in disruption rate-allowed in 2019, Jenkins paced the Big 12 in both categories in 2020. He also has experience playing on the left side of the line, so a move there doesn’t seem far fetched either.

Stacking these two players up is trickier than it may have seemed at first. Wills has the advantage of a solid year under his belt and lived up to his top 10 billing by most accounts, but there were still some shortcomings that will need to be improved. Jenkins almost certainly isn’t going in the top 10, but his college career has been incredibly impressive in terms of on-field performance, albeit against slightly lower competition than Wills had at Alabama.

Ultimately, based on Wills’ run-blocking prowess in college, we tend to think he can shore up that part of his game. He gets the edge, but it’s way closer than we expected.

Somewhat unexpectedly, the Giants made Andrew Thomas the first offensive line pick in the 2020 draft. He had a terrific college career, thriving in both facets of the game. But Thomas’ rookie year didn’t bring that same success. He held up fairly well in the run game, but his 13.7 pressure rate-allowed was fifth worst among NFL left tackles and his 14 pressures that directly led to sacks were the most in the league.

Christian Darrisaw was very successful as a three-year starter for Virginia Tech in the ACC. In his junior year this past season, he was the top pass protector among all tackles with eight pressures allowed in 154 opportunities. His 5.4% disruption rate against was good for third in the conference, which is also where he finished in 2019.

There’s no question that Thomas had a rookie year he’d like to forget, but the skill set that made him the fourth pick in the draft is still there. That said, Darrisaw’s abilities and consistency have us excited about his potential to be a quality NFL-caliber lineman.

It’s highly unlikely that the 2021 draft will see four offensive linemen go in the top 13 picks like last year, especially with at least three of those picks likely being locked into quarterbacks. But based on our metrics, it seems like this 2021 class might not be too far behind in terms of quality offensive tackle play.

Has Trevor Lawrence Ascended to the NFL’s Elite After Outplaying Justin Herbert?