Rising Sun: How Deandre Ayton Has Emerged as the X-Factor in Phoenix | The Analyst 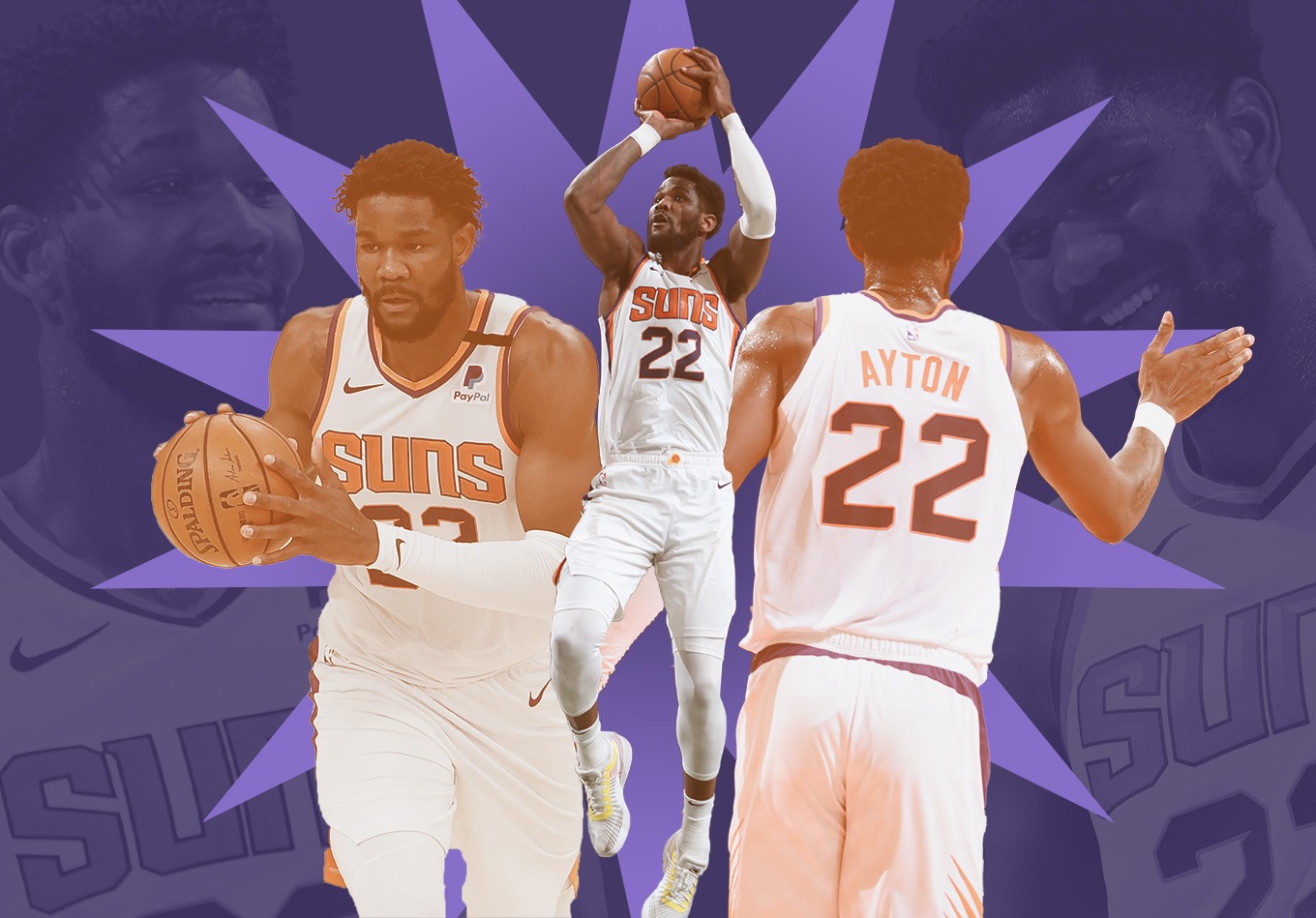 Rising Sun: How Deandre Ayton Has Emerged as the X-Factor in Phoenix

For long stretches of his career, the Deandre Ayton Experience has been maddening.

His peaks inspire confidence a breakout is imminent, actualizing the hoopla surrounding him as a former No. 1 pick. His valleys are bewildering, leaving one to wonder how there exists such a wide gulf between those endpoints and whether he’ll reach the level necessary to flourish amid the Phoenix Suns’ revival.

But then it sets in: Ayton is a 22-year-old big man, just now in his third season, who, through no fault of his own, was selected ahead of All-Star guards Luka Doncic and Trae Young. His performance is, intentionally or otherwise, juxtaposed with theirs, forgetful of the inconsistencies young guys almost always offer. These peaks and valleys are usual pit stops along the way.

The expectations for immediate contributions are higher for first overall picks than they are for others. Ayton hasn’t yet distinguished himself from some of his draft class contemporaries to the degree you’d prefer. His motor and decision-making can waver in confusing manners because when he meticulously approaches his responsibilities, he overwhelms opponents to turn games. He is, undoubtedly, that factor which can tip the scales between second-round exit and possible Finals berth for Phoenix.

Its success does not hinge on him – Chris Paul and Devin Booker are those guys – but the degree to what exactly success means for this team may be most prominently within his control. As of late, Ayton has skewed much closer toward those peaks, suggesting a breakout is percolating. He is aptly assuming his role as a complementary play finisher and defensive anchor for the 41-16 Suns, owners of the league’s second-best record and third-best net rating (plus-6.6).

Over his past 17 games, he is averaging 17.5 points, 10.5 rebounds, 1.2 blocks and 0.8 steals with a 70.7 true-shooting percentage, helping guide Phoenix to a 14-3 record during that span. A simplified offensive role, encouraging him to trim the fat off his shot profile and focus on maximizing his physical tools as a scorer and however else required, is laying the groundwork for a midseason progression.

Playing alongside two All-Star ball-handlers, each of whom manipulate defenses with pace, craft and scoring, Ayton provides a mammoth lob threat. He’s timing his rolls properly, floats off the ground seamlessly and corrals passes with his 7-foot-6 wingspan and a wide catch radius. Both Paul and Book can just toss the ball near his zip code and quite often, Ayton delivers. And because both are among the league’s most potent mid-range threats (each shooting north of 48% from mid-range this season), defenses are likely to creep up to deter those looks, abandoning the backline and opening Ayton for lobs.

Beyond the advantages and stress those two initiators present for opponents, the Suns’ offensive scheme is also well-designed to gain a step against defenses, heavy on ball movement, motion and screening. Paul and Booker are the cruces of that because they’re properly suited to capitalize upon those advantages, but an imposing release valve like Ayton is the suitable complement. His finishing acumen is critical in an offense that steers its lead guards to paint touches.

That lob threat is not where Ayton is turning the corner, even though it remains a sizable portion of his duties. Rather, it’s when his path toward a basket is confronted with a roadblock, mandating he power through, over or around defenses to score. For someone of his tools and physical dimensions, those instances have led him to wilt or caused a sputtered decision-making process in which defenders recover to swarm him. He’d shy away from contact and burp up hurried hook shots or ill-advised fadeaways. The outcome wasn’t optimal as frequently as it should be.

He is 7 feet, 250 pounds. Few guys should stymie him on the roll or deep catches in the post. Upon this blossoming, he’s embracing contact, acting promptly with the ball in his hands and stepping through post touches rather than stepping back. A mentality shift is occurring, which is empowering Ayton in this role as a play finisher where his time of possession comes in short spurts and the Suns rely on him to maximize those opportunities.

Success around the rim has been a staple of his interior excellence each year. He shot 70.6% at the rim as a rookie, 66.0% last season and is up to 71.1% this season – 13th in the league among those who have played at least 40 games. The tweak is a refusal to settle, boosting his percentage of field-goal attempts in the restricted area to a career-high 54.4%. He has almost entirely eliminated mid-range jumpers, which are down to 16.1% of his field-goal attempts after sitting at 28.6 and 25.4 in his first two seasons – shots of which he’s never connected on better than 38%.

Ayton is learning that operating promptly doesn’t have to mean settling against overmatched defenders by flipping up questionable shots. Long an elite finisher, he’s swapping inefficient mid-range face-ups for rim attempts and authoring the best scoring campaign of his career. His 65.2% true shooting is a career-high 8.1 points above the NBA average, comfortably eclipsing his previous best of 4.8 points above league average. Paul’s arrival and brilliance threading passes into narrow windows contribute to this surge; but lately, Ayton is more consistently seizing chances the Point God (and others) spark for him.

This development is vital for the Suns as they approach the playoffs. Two of the West’s other title contenders, the Los Angeles Lakers and Los Angeles Clippers, employ the personnel for switch-heavy defensive schemes and practice as much. They will aim to mitigate the advantages Phoenix’s screening can forge and slow the Paul-Booker duo with rangy, mobile, stout perimeter defenders. Small-ball lineups, particularly for the Clippers, will likely see time, too. Trapping pick-and-rolls, like the Clippers did in their most recent game against the Suns, could become a mainstay. All of this thrusts Ayton into the spotlight.

He will be confronted with mismatches. He must punish them, force defenses to reconsider their strategy and be that third scorer from which the starting lineup would benefit by efficiently producing on the roll, in the post or on putbacks. He has to add a wrinkle to the half-court attack that must factor into opposing game plans, burn them on the offensive glass by plucking boards over guys or beating them to the spot with a revved-up motor. Early in the season, expecting him to do so would’ve required optimism, perhaps some of it unwarranted.

Months later, specifically amid this three-week stretch of bonkers scoring efficiency and thunderous play finishing, there’s genuine belief he can and will do so. He’s a serious threat, battling through contact as a roller and post scorer, and is crushing teams on the glass. The effort on this offensive rebounding barrage is the sort of fire and attentiveness that’s igniting his collective burgeoning.

Phoenix has, more or less, boasted a top-five defense the entire season. Individual talent, with guys like Mikal Bridges, Jae Crowder, Cameron Payne, Jevon Carter, Paul and Ayton, are the foundation and the sum of those skills is best reflected in ball-screen coverage. Bridges, Payne and Paul set the tone at the point of attack by snaking around screens to stay attached. Crowder and Paul are pests at the nail. Still, Ayton is the exclamation point of this elite pick-and-roll defense.

The tone-setters do not isolate him in 2-on-1 scenarios, backpedaling against fiery downhill drives. He typically stations at the free-throw line, equipped to deter mid-range pull-ups with perimeter defenders dissuading off-the-bounce triples. Ayton smoothly covers ground laterally, vertically contests shots and mucks up pocket passes, floaters and lobs with lively hands. Anthony Davis and Rudy Gobert are the modern gold standard for mobility, activity and wide-ranging ground coverage for pick-and-roll big men, but Ayton is showing he could possibly approximate that level down the line. He’s already flustered a litany of All-Star ball-handlers, big and small, in his third year.

Each of those clips involves an All-Star running the show. Their playmaking and scoring identities aren’t carbon copies. Ayton combats all of them because he is malleable in impact. Generally, that compilation is an apt reflection of his performance. There remain, however, head-scratching instances in which his hands are statically glued to his sides and his attention wanders, negating necessary help rotations. Offense looks easy and he’s responsible.

When the Suns opt to switch instead of drop against pick-and-rolls – or teams prioritize coaxing the switch – his abilities suffice and he can frustrate guys by playing light on his feet, and applying a broad shot contest and body control to avoid fouls. But similar to the seemingly perplexing pick-and-roll breakdowns, he’s prone to slip-ups. Games against the Brooklyn Nets and Charlotte Hornets this season come to mind. LaMelo Ball and James Harden repeatedly drew him to the perimeter and targeted his stiff positioning. Ball had 20 points and eight assists in a 124-121 road win on Feb. 24, a week after Harden finished with 38 and 11 in a 128-124 victory in Phoenix.

There will come series, games and stretches of the postseason when Ayton’s aptitude in drop coverage and as a switch big assume principal importance. The periodic inconsistencies, albeit less frequent this season, cannot rear their head. The margin for error in the Western Conference slugfest is too thin.

But right now, this version of Ayton, while not the floor-spacing, playmaking 5 with ball skills that some imagined pre-draft, is absolutely starring in his role.

That matters. He is contributing to a stratum of basketball that few other teams are replicating this year. It’s a winning archetype. The peaks are elevated and those confounding valleys are fading into the distance, a relic of who Ayton once was, not the player he is becoming.