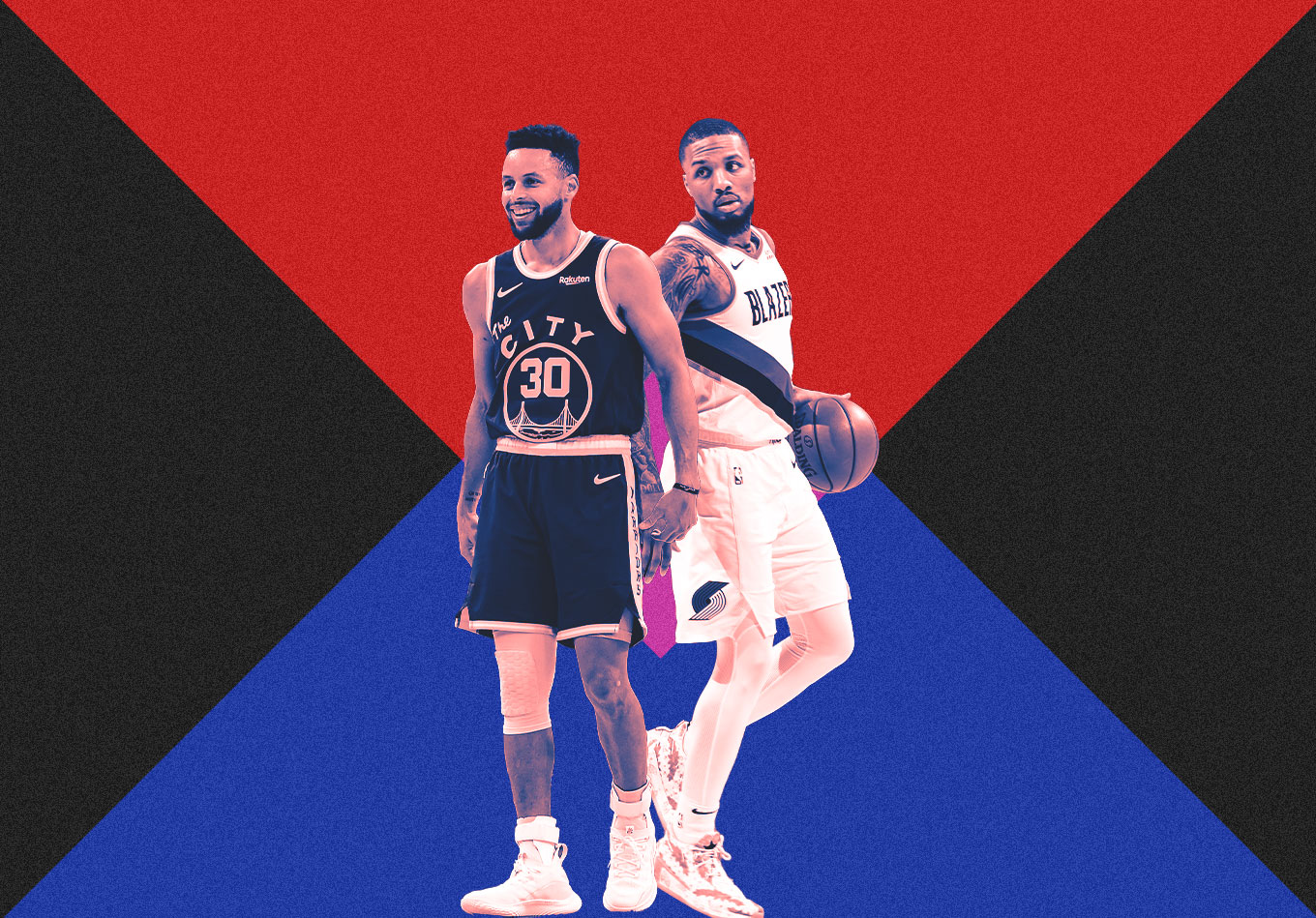 The small-ball era in the NBA isn’t actually about how tall your center is. What’s it actually about? Here’s an update on where the league’s offensive revolution stands in 2021.

From George Mikan to Wilt Chamberlain to Bill Russell to Kareem Abdul-Jabbar to Hakeem Olajuwon to Shaquille O’Neal, the NBA was a big man’s league for many years.

From 1950-2009, 51% of MVP winners were centers and 33% of top-three picks were centers. That’s not to say we didn’t have smaller superstars like Julius Erving, Magic Johnson, Michael Jordan and Kobe Bryant emerge during this time.

But seemingly everything changed starting in the 2010s.

The Golden State Warriors popularized the term with their “death lineup” in the middle of the decade, playing 6-foot-6 Draymond Green at center and stretching opposing defenses with perhaps the two greatest 3-point shooters in NBA history in Stephen Curry and Klay Thompson. Small ball became known as playing without a traditional center and shooting a lot of 3s.

But is that really all there is to it? Why does it work? Is it the present and future of the NBA or just a cultural fad like crocs and avocado toast? Let’s break it down.

1. 3-Point Shooting from All Positions

The most obvious modern basketball trend has been the rise of the 3-pointer.

The reason for the increased volume is definitely influenced by analytics. In fact, it’s really a simple math problem: Why shoot a midrange jumper worth two points when you can shoot a “similarly difficult” 3-point jumper worth one point more? It all comes down to expected points per shot. A league-average 36% 3-point shooter would have to shoot 54% from midrange to justify taking a long 2-pointer.

Fascinatingly enough, players aren’t shooting a much higher percentage from deep compared to 20 or 30 years ago. They’re just shooting more. The league average 3-point percentage in 2005 was 35.8, and in 2020 it was…35.8. Now, don’t mistakenly claim that NBA players aren’t better shooters. The increased volume and the increased difficulty that many players shoot with, especially off the dribble (think of that Steph dribble combo step back 3 against the Clippers and Damian Lillard’s logo 3s), are factors that definitely count toward increased shooting ability.

However, zooming in reveals that one type of player has, in fact, gotten substantially better at shooting 3s: big men. Again, this isn’t necessarily a revelation. Some days, it’s Nikola Jokić’s world and the rest of us are just living in it. But it’s interesting to – well – step back and quantify it.

The prototype “old-school” NBA frontcourt was a la the New York Knicks of the late 1990s: a scoring small forward (Allan Houston), a bruising power forward that plays in the mid-post (Charles Oakley) and a tall defensive center (Patrick Ewing, although Ewing was obviously great offensively too). The “grit and grind” Memphis Grizzlies of the early 2010s also fit this prototype, with Rudy Gay, Zach Randolph and Marc Gasol.

But in 2021, the classic Oakley/Randolph/Elton Brand/Karl Malone-type power forward has mostly disappeared and has been replaced by an extra wing, while centers are stretching the floor and shooting more 3s than ever.

On the flip side, having a wing or guard that can’t shoot 3s can be even more of a negative for an offense than a good shooter is a positive.

Take Andre Roberson for example. Roberson, a 6-foot-7 wing that was one of the best perimeter defenders in the NBA in the mid-2010s for the Oklahoma City Thunder, is a career 25.3% 3-point shooter – and that might be overstating his ability. In the infamous 2016 Western Conference finals against the Golden State Warriors, the Thunder blew a 3-1 lead and lost in seven games, and a large reason was a key defensive adjustment the Warriors made against the Thunder.

The Warriors defender “guarding” Roberson would do the exact opposite, leaving Roberson open and daring him to shoot 3s in order to load the strong side against Kevin Durant and/or Russell Westbrook, which led to horrible shooting performances for both KD and Russ in games 5, 6 and 7.

Having a center like Lopez, Jokic, Kristaps Porzingis or Karl-Anthony Towns who can shoot 3s does a few positive things for the offense. One, it opens up the pick-and-pop game as a variation of the pick and roll, therefore making offense less predictable. Two, it spaces the floor and de-clogs the paint, which is great when you have an elite, heliocentric (aka ball-dominant/ “do-it-all”) offensive initiator. Which brings us to Part 2…

There are a few benefits to having a tall conductor of your offense’s train. In the high pick and roll, which is the predominant offense of the modern NBA, having a bigger ball handler that can see over the top of the defense to make cross-court skip passes is a huge plus, in addition to being able to bully smaller guards one-on-one.

The Pelicans are embracing this concept in 2021, playing traditional point guard Lonzo Ball more off the ball and letting 6-foot-7, 284-pound Zion Williamson bring the ball up the court and run pick and rolls as the ball handler with 6-foot-4 JJ Redick setting the screen. Yes, it’s as amazing as it sounds.

Perhaps the sexiest skill for any NBA nerd is defensive switchability – the ability to switch defenders on screens rather than play less effective but “safer” defensive coverages like drop coverage or the high hedge/early weakside rotation coverage.

In the 2020 NBA Finals, Anthony Davis and Bam Adebayo, two of the best defensive big men in the NBA, were on display. Compared to most big men in the NBA who are too slow to stay in front of NBA guards, Davis and Adebayo are both athletic and nimble enough to switch the pick and roll and disable any potential positional mismatches.

The king of hunting these mismatches is Davis’ teammate, LeBron James. Especially in the playoffs, when any weakness will be attacked, LeBron will call for a high screen, force the defenders to switch, and then isolate against the weaker defender. This was a common technique in those NBA Finals battles against the Warriors, when LBJ would prefer to isolate against Stephen Curry rather than Andre Iguodala.

However, if you have an entire five-man lineup capable of switching every pick and roll and every off-ball screen, you can avoid any potential “mismatches” – both on the perimeter and in the paint.

This is why we’ve seen the decrease of “traditional” centers. Post-up offense is relatively inefficient unless you’re Joel Embiid-good, and most 7-footers get exposed playing pick-and-roll defense (think about Jahlil Okafor, the No. 3 overall pick in the 2015 draft and one of the best post players in basketball, who is now barely in an NBA rotation due to defensive liabilities).

One of the potential downfalls of small ball is of course rebounding. In the Lakers playoff series against the small ball-system Houston Rockets in 2020, the Lakers, featuring a frontcourt rotation of James, Davis, JaVale McGee and Dwight Howard, outrebounded the James Harden Rockets in every game by an average of 3.6 rebounds and by 58 total boards in Games 3-5 to close out the series.

The perfect small-ball lineup would combat this by having traditionally tall centers who can rebound at a high level while also being athletic enough to switch on the perimeter. After trading away Clint Capella, the 2019-20 Rockets would often play 6-foot-5 P.J. Tucker at center. That’s just not going to cut it for 30-plus minutes a game.

Defensive switchability is also one of the reasons why tall two-way wings are so valuable. Wings that can create their own shot and play lockdown perimeter defense against multiple positions combine the best of both worlds. Players like LeBron James, Kawhi Leonard, Jayson Tatum, Jaylen Brown and Paul George all fit this mold.

To a lesser extent, this is also where the “3-and-D” wing concept comes from. Wings that can play high-level, switchable defense while bringing the most valuable “role player” offensive skill – 3-point shooting – to the table are the ultimate companion to a superstar player at any position.

Imagine a future where every player is between 6-foot-6 and 6-foot-10, has the ability to shoot from the perimeter, handle the ball and switch on every screen. For some, that’s a version of basketball heaven.

So now, the questions that remain are: What does this all mean? Is this it for basketball innovation? Have we “solved” the puzzle and created the most efficient offense possible, and all that matters now is how good players can get in this system? Or is this just another era of hoops and in 20-30 years we’ll go through another revolution of NBA offenses?

The answer is, well, both. Sort of.

Predicting the future of basketball is almost impossible (can just about guarantee no one in the ’90s predicted that 30 years later the average NBA score would be 115-110 and that 7-footers would be launching shots from 30-feet out).

Unless the NBA adopts a new crazy gimmick like the 4-point shot from Ice Cube’s Big3 league, 3s aren’t ever going away – they’re too valuable and efficient. However, the overall usage of the 3-pointer will likely stabilize. It’s hard to imagine teams will be jacking up 90% of their shots from downtown in 10 years.

There’s a strong argument that the biggest changes the current offensive revolution we’re seeing will bring will be to the point guard position and scouting.

Because of how dynamic taller guards and wings are with the ball, it takes something extraordinary for a smaller point guard like Trae Young, Kemba Walker or, looking ahead to the 2021 NBA Draft, Sharife Cooper, to be anything better than a net zero defensively. And if the goal of team building is to win an NBA championship, that’s a massive problem.

On the other side of the coin, the early-career success of taller offensive initiators like Doncic and LaMelo Ball and the value that elite two-way wings like Leonard and Tatum have for all of the reasons described above are going to push scouting/draft decision-making in that direction.

The “best player available” draft strategy will progressively become “the best player available given the current style of the NBA,” and therefore a 3-and-D wing like Devin Vassell or a tall guard that can shoot 3s and play both on and off the ball like Tyrese Haliburton will be seen as more valuable than a more traditional center like James Wiseman.

The future of the NBA is tall small ball. Or maybe it’s small tall ball? Whatever. Either way it’s exciting, and the NBA offensive revolution hasn’t quite reached – well – peak small.