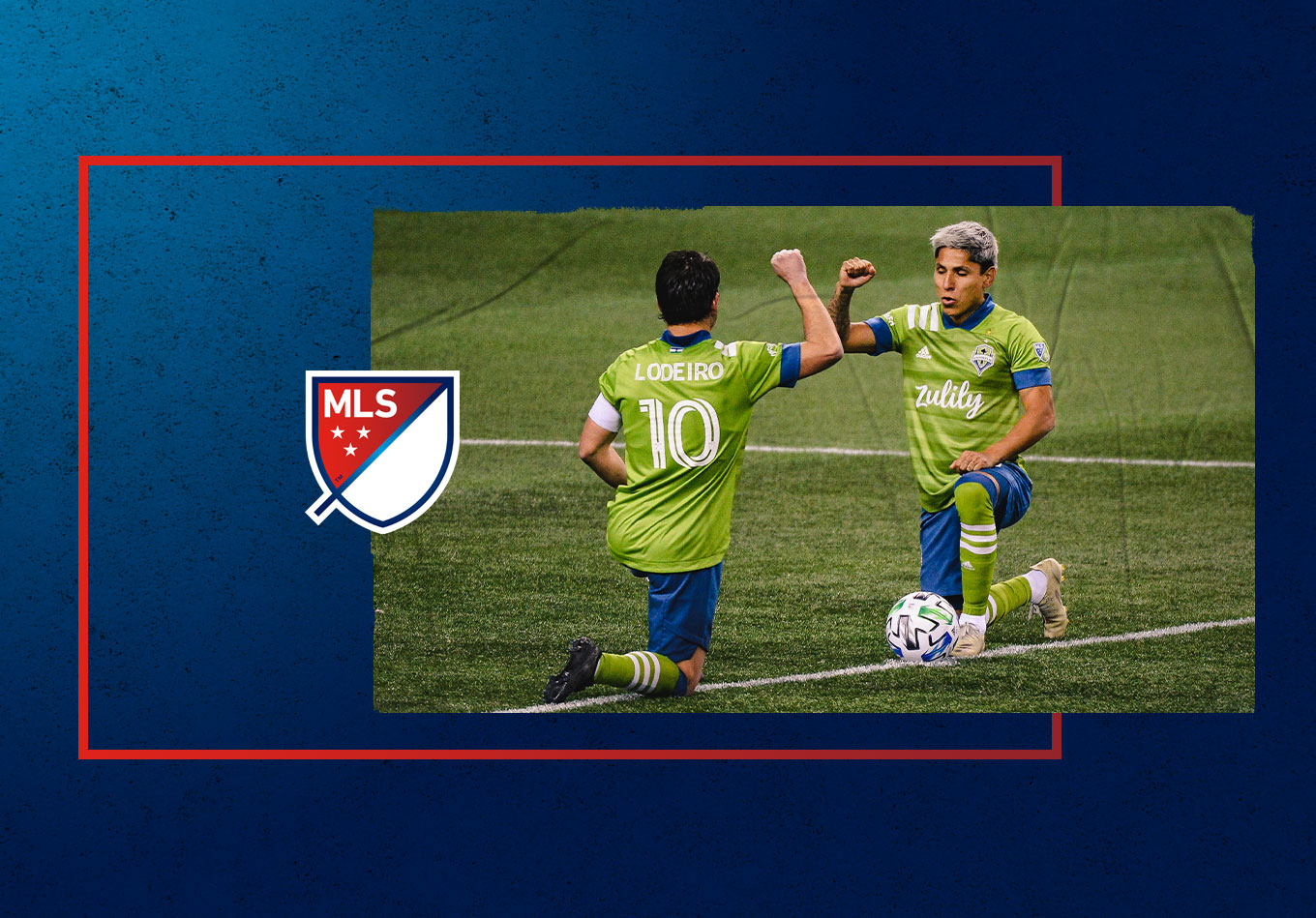 MLS is set to start 2021 on Friday night with two Western Conference clashes, including a different version of the Seattle Sounders hosting Minnesota United. How much will they miss Jordan Morris? Ben Baer looks at this and other storylines out of the West.

The only Western Conference team to pick up a trophy in 2020 was the Portland Timbers, who won the MLS is Back Tournament off the back of sterling performances from Sebastian Blanco. That was a bit surprising as LAFC were coming off the best regular season in MLS history and the Seattle Sounders returned the majority of their squad after winning MLS Cup.

LAFC mostly faltered in 2020, save for a run to the Concacaf Champions League final after the MLS season was completed, and the Sounders cruised through the regular season – finishing second behind Sporting Kansas City. Brian Schmetzer’s team returned to MLS Cup yet again – but were thoroughly outclassed by Columbus Crew SC in the final to the tune of a 3-0 loss.

So in the West, it’s another preseason of questioning whether the Sounders can continue to conquer the rest of the conference.

Seattle has been the dominant team in the West ever since Schmetzer took over for legendary coach Sigi Schmid in the middle of the 2016 season. The change sparked a run to MLS Cup as the Sounders finally broke through in the playoffs and lifted the Philip F. Anschutz trophy. They returned the following year, losing to Toronto FC after beating them the year before, and got back a third time in 2019 – beating Toronto yet again to win their second MLS Cup.

2020 was a wonky year for every team due to the pandemic, but Seattle was mostly able to escape any major disruptions aside from their star striker Raul Ruidiaz contracting COVID-19 while away on international duty. Despite not finishing atop the Western Conference, it was clear that the Sounders were a top team.

Taking a look at their expected goal figures, there was no MLS team that even came close to them:

Only one other team had an xGD greater than 10 and that team was almost nine behind them in the figure. Their actual goal difference almost identically matched that number (+21), though the Philadelphia Union (+24) beat that number thanks to some incredible finishing and top-notch goalkeeping.

Much of their attack was fueled by a Best XI season from playmaker Nicolas Lodeiro. The Uruguayan had seven goals and six assists in under 2,000 minutes and was second in MLS with 0.38 expected assists per 90 minutes (min. 800 minutes played).

The player he mostly fed was again Ruidiaz, who was second in MLS with 12 goals. His 0.76 goals per 90 minutes led MLS, and when the Peruvian was on the field, the Sounders scored two goals per 90 – besting their average of 1.5 goals per 90 when he was not.

But one major reason the Sounders were so dominant during much of the 2020 season was the play of Jordan Morris. The homegrown product came into MLS nominally as a striker and initially struggled when pushed out to the wing. Over the years, he slowly gained confidence in a new position, and 2020 saw him breakout in a way that we hadn’t seen before, despite previously being a key player on championship teams.

Morris started his MLS career by leading the Sounders to the championship in 2016. After a down 2017, he missed the entire 2018 season due to a torn ACL suffered in the Concacaf Champions League. He used the time on the sideline to study how he could become a better player at his adopted position. It was a slow start to 2019, but he came on strong late – scoring three goals in the playoffs – and entered 2020 with renewed confidence.

What made Morris so good last season was not his goalscoring — though he did put in 10 — but rather that he made himself into a true playmaking winger. In 2017, Morris averaged just 0.12 expected assists per 90 minutes. That number jumped all the way to 0.25 last season, good for 20th across the entire league. In the more traditional stat of chances created, Morris had never averaged more than 1.1 per 90 in a season. He pushed that to 1.5 in 2020. The Seattle native also significantly improved in the number of times he was beating defenders, with his rate of 1.7 completed dribbles per 90 in 2020 his best in a single season.

The problem for Seattle is that Morris won’t get the chance to build off that strong season in 2021. While on loan with Swansea City in February, Morris again tore his ACL, meaning he will most likely miss the entire of the 2021 season.

Depending on your particular view of certain players, it gets worse. He won’t be the only player Seattle will be without. After three and a half seasons at the club, starting right back Kelvin Leerdam was not re-signed. Sweden international Gustav Svensson was also not brought back after a 2020 season that saw him become only a part-time starter. Joevin Jones and Roman Torres also departed this offseason, meaning there will be just five starters from the 2019 MLS Cup active for the Sounders this season.

But may we refer you back to Lodeiro and Ruidiaz. Seattle will always have a chance with them on the pitch,though they and star midfielder Joao Paulo have all hit age 30. Add in the fact that GM Garth Lagerwey has not added any definite starters during the offseason and there are plenty of questions heading into 2021. Schmetzer has been experimenting with a two-forward formation, as Ruidiaz could pair alongside Will Bruin or Fredy Montero up top, due to the lack of depth on the wing without Morris or Jones.

Lagerwey will likely be looking to make big additions over the summer, as he’s done before, but the question has to be asked: Is this finally the year we see a dip in Seattle?

LAFC enter the season as the favorites due to their run in CCL and the fact that Carlos Vela is healthy entering the year. The Mexican star played just 422 minutes in 2020 but will join with Diego Rossi and new arrival Corey Baird to again make a formidable attack. Center back Jesus David Murillo joined up late in the year in 2020, and when he started the Black & Gold allowed just 1.2 goals per game. That number was 1.9 when he didn’t start.

Granted, even the better of those numbers is elite, and their overall mark of 1.76 allowed per match ranked 21st. Optimists may argue that was an unlucky number by pointing out a 1.53 xG against, but that still ranked 16th.

Across town, Chicharito will be hoping he can have a much better season in 2021 than he did in 2020. He struggled with injuries and ineffectiveness in his first year with the Galaxy, leading to just two goals on opportunities producing a 4.17 xG. With Cristian Pavon not returning, the Galaxy have invested in two new wingers from Europe (Samuel Grandsir and Kevin Cabral) in hopes they can have a better connection with the former Manchester United and Real Madrid striker.

Anyone arguing they don’t need the help is taking the contrarian’s stance. Pavon scored 10 of the team’s 26 goals, which ranked 17th at 1.23 per game. Their xG also ranked 17th at 1.37. That’s not a hideous number if you’re exceptional defensively, but the Galaxy were anything but with 2.09 actual goals against (25th) and 1.68 expected goals against (19th). The good news is that was an improvement over 2019 (1.95 xG against). The bad is it’s about twice their xG against from their last MLS Cup in 2014 (0.87) and the Galaxy have had an xG against of 1.65 or higher for four straight years.

Austin FC are the lone expansion team this season, and they come in with plenty of firepower. Josh Wolff helms a squad that scored 10 goals in three preseason matches and promises to be a team that will be looking to be on the ball and create chances. If Cecilio Dominguez, Rodney Redes and Tomas Pochettino can perform at a high level – all having come in from South America – the first-year club should compete for a playoff spot.

Want more MLS? Right this way to Atlanta United and the Eastern Conference.