The Analyst's Six Nations Players to Watch | The Analyst 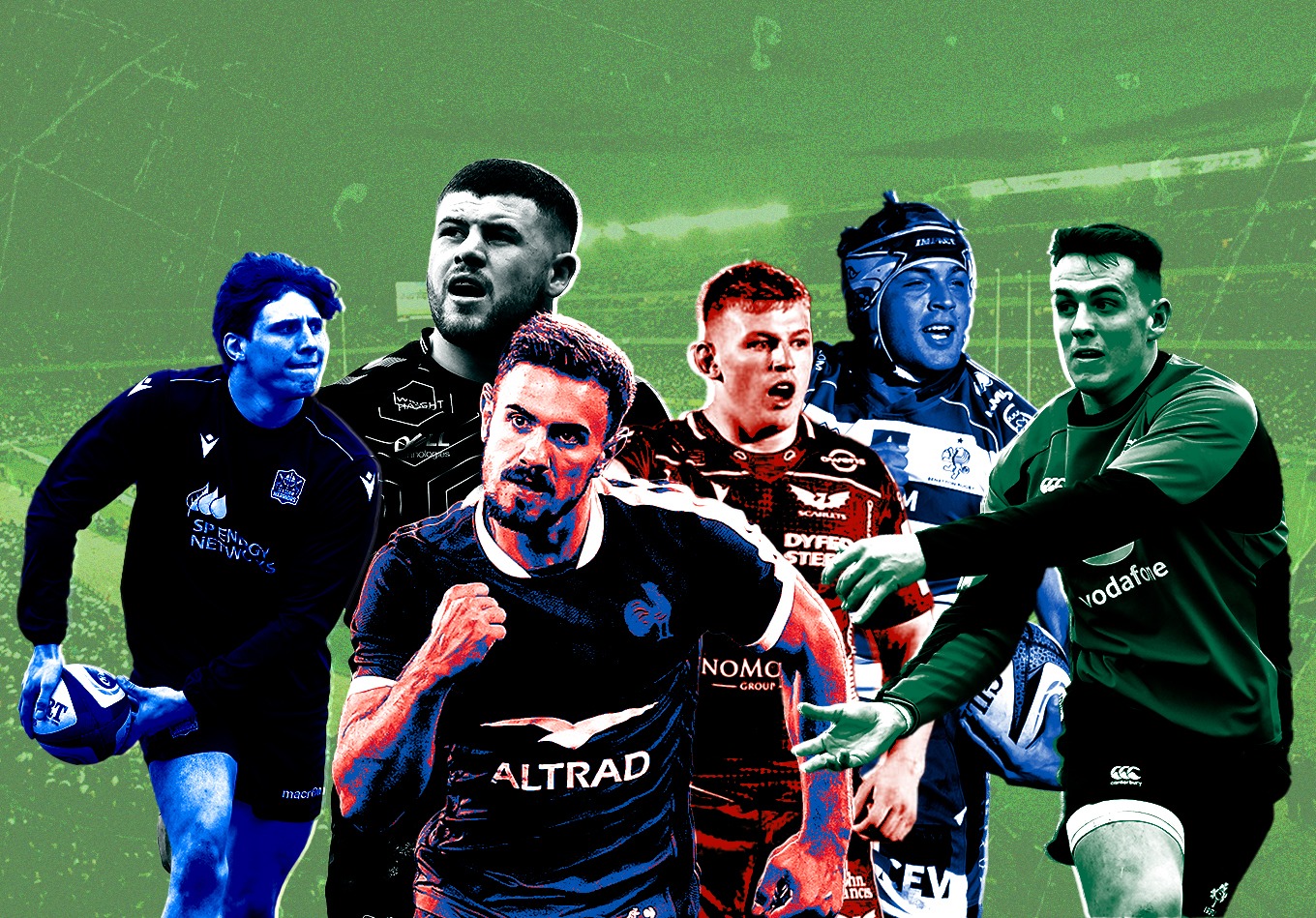 As we approach the start of the 2022 Six Nations Championship, we harnessed the expertise of our esteemed Rugby data editors to profile one player from each side who could make a massive impact this year.

The Bloxham Basher or the Banbury Bulldozer, his nickname is still TBC, but the young Wasps star has already made quite a name for himself. Having captained England U18s and featured for the U20s, a call up to the senior squad was seemingly inevitable. Settling on a position has been half the challenge of Barbeary’s progress so far. The dream of playing in the centres faded at age-group level, then there was the toss-up between a more technical development at hooker or a freer role in the back row. Eventually, his performances in the back row for Wasps have dictated his future and it is there that Eddie Jones will likely unleash him. Jones is blessed with plenty of headache decisions in the back row already but could his power at No. 8 allow Tom Curry to slot back into his preferred role on the flank? Sam Simmonds and Alex Dombrandt may have other ideas…

One of Barbeary’s obvious talents is his ball carrying. Since his Wasps debut, Simmonds and Daniel du Preez are the only forwards to have a better gainline success rate than him in the Premiership/Europe (min. 200+ carries), whilst his rate of 6.4 defenders beaten per 80 minutes is way ahead of any other player to accrue 500 mins in those competitions in that time frame.

A formidable try-scoring rate and tenacious talent in defence at both the tackle and breakdown mean he is a real threat to his rivals for a spot in the back row. The 2022 Guinness Six Nations may come slightly early in his development for a full starring role, but it is surely just a matter of time.

Centre may be one of Ireland’s strongest areas when it comes to top class talent, with Robbie Henshaw, Garry Ringrose and Bundee Aki all vying for the two positions for the last few years. But this year’s Guinness Six Nations may see the emergence of a new man in the Irish midfield, Ulster’s James Hume.

The 23-year-old made his provincial debut back in September 2018, coming off the bench in a 64-7 hammering away to Munster. Fortunately for Hume, bench minutes weren’t a sign of things to come, and he’s now firmly established himself as one of the first names on the team sheet in an Ulster side that’s coming off the back of a successful Heineken Champions Cup pool stage. It is in that competition that Hume has shown he’s got what it takes to mix it with the best in Europe.

Hume has made the joint-most successful offloads in the competition this season, along with Grégory Alldritt, but the Irishman has found a team-mate with each of his offloads this season – a 100% success rate – while the La Rochelle flanker’s tally of seven came from 10 attempts in total (70% success rate). The Ulster centre also ranks second for defenders beaten and third for carry metres in the Champions Cup this season, while only three players have tallied more than his 45 carries overall.

In fact, of those carries, nine have seen Hume commit three or more tacklers – more than any other player. His ability to draw in defenders and offload out of contact is a skill that could cause havoc on the international stage where gaps in defences are at a minimum. Will he get his opportunity over the next six weeks?

France’s gameplay has evolved a lot since Fabien Galthié took the reins of the team in 2020. The most recent example of this evolution was his decision to stop the tradition of using a No. 9 or 10 as the main kicker and place the full back in that role instead. As was the case for Leigh Halfpenny for Wales or more recently Jordie Barrett with New Zealand, Melvyn Jaminet has had the responsibility of kicking for France in five of his six appearances with Les Bleus in 2021. Nobody can deny it was a success.

Jaminet had just finished a season playing in Pro D2 when Fabien Galthié called on him for France’s tour in Australia during the summer of 2021 in a Les Bleus team missing several regulars. Jaminet was one of the two uncapped players to start the first game Down Under, alongside hooker Gaëtan Barlot, in a frustrating game in which France lost in additional time (23-21). For the second Test, Galthié decided to let Jaminet kick, which he did perfectly, slotting his eight attempts and helping France to a first win against the Wallabies in Australia since 1990 (26-28).

The USAP full back went on to become France’s first-choice kicker for their remaining four games in 2021, ending the year with 89 points and an impressive 92% accuracy from his place kicks (34/37). The last French player to score as many points in a single calendar year was Morgan Parra in 2011, who scored 98 points across a total of eight games. In fact, Jaminet’s 92% success rate was the best of any of the 19 players to attempt 20+ kicks for a Tier 1 nation in 2021.

In his first season in the TOP 14, Melvyn Jaminet has slotted 78% of his kicks at goal, falling from his exceptionally high standards at Test level. However, he has shown that his kicking from hand can also be a weapon, having gained 2461 metres from his 64 kicks in play. His average of 38 metres gained per kick is the highest in the French top flight this season (min 50 kicks).

France head into the 2022 Six Nations with high expectations, but they will need a reliable kicker to help them lift the trophy for the first time since 2010, after a 2021 campaign in which Les Bleus recorded the worst place kick success rate of any team (75%). A problem which will go away if Jaminet can maintain his form from 2021.

Wales’ distinguished production line of back rows could see a new graduate in this year’s Six Nations, with Jac Morgan vying for his first international cap having just turned 22 years old. Morgan has plenty of experience with Wales’ underage teams, representing them at U18 level and captaining the U20’s in the 2020 U20 Six Nations, which included an away win against eternal rivals England.

Having joined the Ospreys from neighbours Scarlets in the summer, Morgan has quickly established himself as a key component of Toby Booth’s side.

A constant thorn in opponent’s sides, no player in this season’s URC has come close to matching the tackling numbers of young Morgan. A total of 144 completed tackles puts him 32 ahead of Ulster’s Nick Timoney in second place. Seven of these have also been dominant, once again a league-high.

Morgan has also proven himself to be a menace come ruck-time, finding himself tied top for breakdown steals and second in terms of attacking rucks hit amongst flankers.

Wales will certainly be hoping that he can carry his form from the United Rugby Championship over to the senior international stage given the absences of Josh Navidi and Justin Tipuric due to injury. Will this year’s Six Nations be one that sees the Ospreys flanker announce himself on the world stage?

There is much promise and excitement levelled at this current Scotland team, not least with the young contingent looking to make their mark on the squad.

One of five uncapped players in Gregor Townsend’s side, Rory Darge has set tartan tongues wagging and will look to make it third time lucky in gaining a maiden cap after two previous false starts.

The 21-year-old Glasgow flanker would have certainly played in the cancelled Summer Tour, before an untimely ankle injury also ruled him out of the Autumn Series. A former Scotland U20s captain, amassing 13 caps at that level, this year’s Six Nations should finally see him debut for the senior side.

That call up has been earmarked for some time now, despite Darge only making his senior debut for Edinburgh in July 2020 after graduating through the academy system, his sole appearance for the capital club before a move across to Glasgow where he has gone from strength to strength, muscling his way into a formidable starting back row, a feat which he will look to repeat on the international stage.

Despite crashing out of the Champions Cup in the pool stages, Glasgow are well positioned in 4th in the United Rugby Championship and it’s there where Darge is really showcasing his all-round talents.

A menace on both sides of the ball, at the time of writing he tops the charts for line breaks (6) and defenders beaten (22) by a forward across the URC, displaying attacking prowess which makes the possibility of pairing him with Hamish Watson on the Scottish flanks a tantalising prospect.

Equally skilled in securing possession, Darge has won eight turnovers for his side with only four players managing more, whilst also sitting top for attacking rucks hit by any flanker in the competition.

Should he carry this form onto the Test stage it is very difficult to see it being much longer that he is known only as an uncapped prospect.

Italy have selected a fairly inexperienced hooker contingent for this year’s competition, with just nine caps between the three players named in the position. Azzurri fans should have little cause for concern though, given the rise of Gianmarco Lucchesi in recent times, who will be looking to expand his international repertoire in the absence of Luca Bigi.

A key player as Benetton shocked everyone by winning the Rainbow Cup at the tail end of last season – beating South African heavyweights the Bulls in the final – Lucchesi’s stock has risen even further in this year’s newly formed United Rugby Championship.

Whilst his lineout throwing numbers are certainly eye-catching, landing him in second spot for accuracy amongst players with at least 30 attempts – only fractionally behind Rob Herring – what truly sets Lucchesi apart is his expertise at carrying the ball, having beaten more defenders than any other hooker in the URC thus far.

This innate ability to drive his side forward has also seen Lucchesi joint-top of the try-scoring chart amongst hookers, alongside Leinster’s Dan Sheehan.

Should the 21-year-old Lucchesi maintain his exponential growth and translate it to the international stage, Italy could well be looking at Bigi’s long-term successor.