The Las Vegas Raiders vs. Kansas City Chiefs Through Time | The Analyst 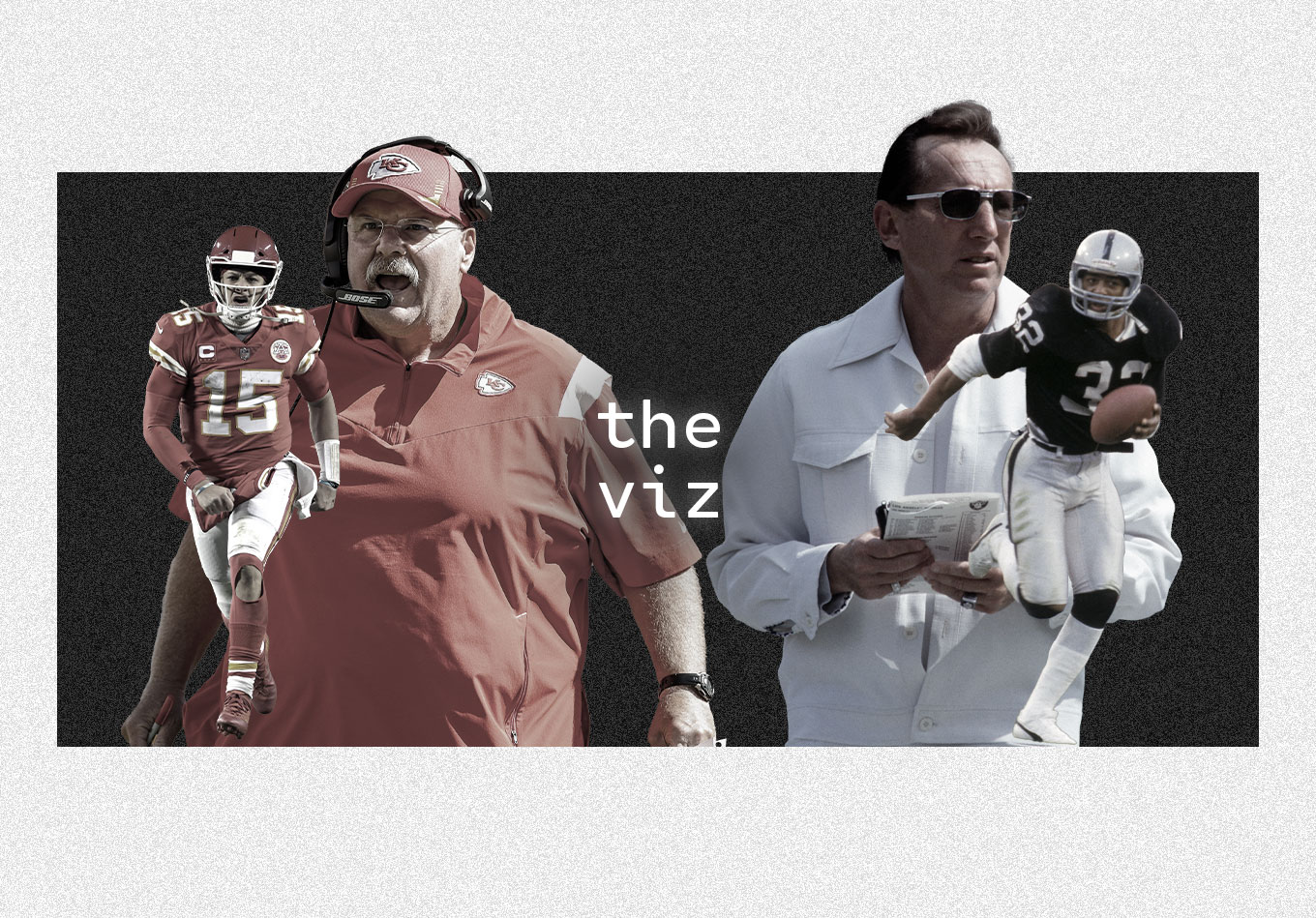 The Las Vegas Raiders vs. Kansas City Chiefs Through Time

One of the most celebrated rivalries in the NFL is adding another chapter this season. Telling the story comprehensively would take volumes, so we took a crack at showing it with fewer words and more data viz ahead of another meeting in this historic rivalry.

The Capulets and Montagues. The Hatfields and the McCoys. And the Raiders and the Chiefs.

Like all multi-generational rivalries, the Raiders and Chiefs started with a bitter feud. This one was between team owners. And while not everyone involved may know the whole story anymore, the teams know that they’re not supposed to like each other.

The rivalry was close in the first 10 years of its existence, but the momentum has shifted drastically twice in the ensuing decades.

We’ve taken “The Viz,” a series that lets data visualizations and tables do much of the talking, over to the National Football League. After exploring the Dallas Cowboys-Washington Commanders and Chicago Bears-Green Bay Packers feuds, we head to the AFC West to show why the Chiefs-Raiders rivalry means more than typical divisional matchups.

The rivalry started before the teams even played an NFL game. Al Davis was the commissioner of the American Football League (AFL), which was a league started by Lamar Hunt after his failed bid for an NFL expansion franchise.

Davis took umbrage at the fact that Hunt negotiated the NFL-AFL merger without him and agreed on Pete Rozelle becoming the commissioner of the newly merged league. The tension between the two heightened the rivalry between the teams from the very start.

The Chiefs opened the rivalry with a big advantage, although not as the Chiefs. The franchise was originally the Dallas Texans, who dominated the Oakland Raiders 34-16 in their first matchup. The Texans would win five of the six games between the two teams while based in Dallas.

The tide started to shift when the Texans moved to Kansas City and became the Chiefs. The Raiders managed to take nine of the next 14 regular-season games to even up the first decade of competition.

The Raiders managed to hold a significant edge throughout the next two decades, winning 12 of 18 games in the 1970s and 12 of 19 in the ‘80s. But the advantage came to a screeching halt in the ‘90s when the Chiefs turned the rivalry into a one-sided affair and haven’t looked back since.

The Chiefs went 17-3 against the Raiders in the ‘90s, which was impressive because the Raiders weren’t that bad during that era. The Raiders finished below .500 just three times in the decade and below 7-9 just once (they went 4-12 in 1997).

But the Chiefs were one of the premier franchises of the ‘90s. The team had six 10-plus win seasons and only one with a losing record (they went 7-9 in 1998). And even in that year, they beat the Raiders twice.

And Kansas City won three of the four meetings in 2020 and 2021, although the Raiders are hardly alone in losing division games to the Chiefs. Patrick Mahomes was a combined 21-3 against AFC West teams heading into 2022.

Believe it or not, Hall-of-Fame coach John Madden isn’t the Raiders’ all-time leader by winning percentage. Johnny Rauch, who coached the team for three seasons prior to Madden, amassed a franchise-best 33-8-1 (.805) record. Madden had the longevity to go along with massive success, securing a .759 winning percentage over a decade of coaching.

The Raiders have had far more head coaches than the Chiefs, with 21 over 52 seasons heading into 2022. Of the 21, only eight have winning records.

While most of the stats to this point have been in favor of the Chiefs, playoff success points to the Raiders as the more successful franchise.

The Raiders have 25 playoff wins, which ranks seventh among all NFL franchises and third among AFC teams. The Chiefs have 17, which ties them for the 18th in the NFL and tied for seventh in the AFC.

This may come as a shock to younger NFL fans, as the Raiders don’t have a playoff win (and only have two appearances) since winning the AFC championship in 2002. Derek Carr and the Raiders lost a heartbreaker to the eventual AFC champion Cincinnati Bengals in the 2021 playoffs and were down to third-string quarterback Connor Cook in the 2016 wild-card round when they lost to the Houston Texans 27-14.

But from the late ‘60s to the early ‘80s, the Raiders were a playoff juggernaut. From 1967-83, the Raiders tallied a remarkable 19 playoff wins. The team has just six playoff wins since then.

The Chiefs’ playoff success contains a long drought as well. After winning the league championship in 1962 and the Super Bowl at the end of the ’69 season, the team went 0-3 in playoff games from 1971-90. Despite great regular seasons in the 1990s, the team added just three more playoff wins to the total in that decade. Marty Schottenheimer went just 3-7 in the playoffs as Kansas City’s head coach.

The Chiefs had another long playoff drought from 1994-2015, going 0-7 in the playoffs during these seasons before finally getting a playoff victory in 2015 when they forced four Brian Hoyer interceptions in a 30-0 win over the Houston Texans.

Then in 2018, the team ushered in the Patrick Mahomes era, and with it, an age of playoff success. Mahomes is 8-3 in the postseason and seems poised to keep the Chiefs moving up the leaderboard for years to come.

The Raiders are holding on to a narrow lead in Super Bowl wins, with three compared to Kansas City’s two.

The Raiders, coached by Madden, won their first Super Bowl in 1977 with a 32-14 over the Minnesota Vikings. They were led by Clarence Davis’s 137 rushing yards as Ken Stabler threw for only 180 yards. Minnesota quarterback Fran Tarkenton threw two interceptions, including a Pick 6 to cornerback Willie Brown.

The team won it all again in 1981 when they were led by Tom Flores. Cliff Branch caught two of Jim Plunkett’s three touchdown passes in a 27-10 victory against the Philadelphia Eagles. Philadelphia QB Ron Jaworski threw three interceptions, and the game was never really close.

Flores led the team to its third Super Bowl win as well, 38-9 over Washington in 1984. Marcus Allen rushed for a then-record 191 yards and two touchdowns. The Raiders have just one Super Bowl appearance since, a 48-21 loss at the hands of ex-coach Jon Gruden and the Tampa Bay Buccaneers in 2003.

The first was in 1969 when Kansas City beat Minnesota 23-7. It was a defensive struggle, as neither quarterback threw for 200 yards and no running back amassed more than 40 rushing yards. But the Chiefs defense forced four turnovers to win the game going away.

The Chiefs finally made it back to the Super Bowl in the 2019 season, beating the San Francisco 49ers 31-20. Mahomes threw for 286 yards and two touchdowns on the way to MVP honors, and Damien Williams ran for 104 yards and had two TDs in the last three minutes in a comeback win.

Kansas City made the Super Bowl again the next year, but it couldn’t overcome several offensive line injuries and fell 31-9 to Tom Brady and the Tampa Bay Buccaneers.

Mahomes and the Chiefs seem to be in the Super Bowl conversation every year, and one more win would tie them with the Raiders with three titles apiece. But entering the 2022 season, the Raiders could claim more playoff success in their history – a fact their fans likely relish.