The Dallas Cowboys-Washington Commanders Rivalry Through Time: The Viz | The Analyst 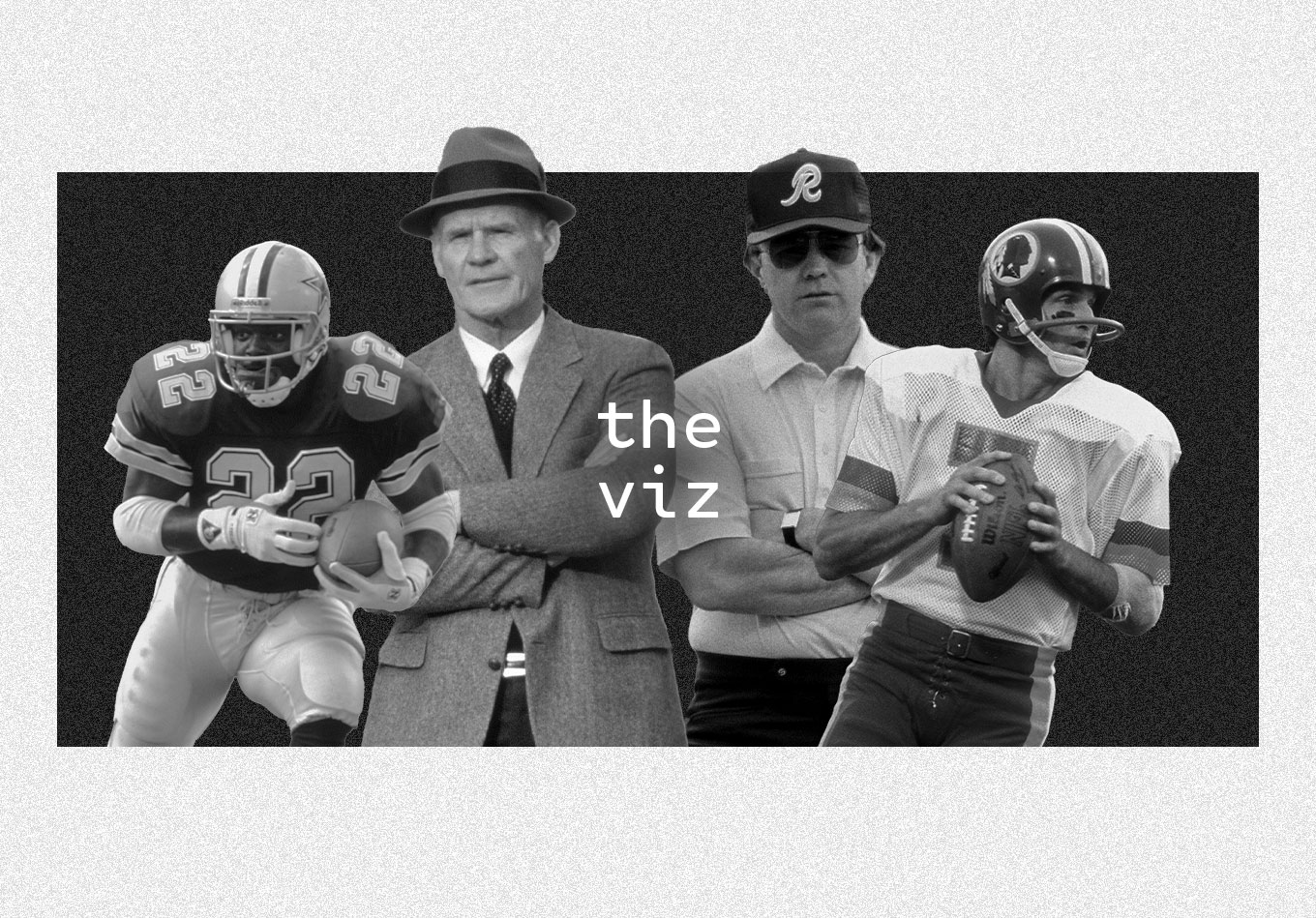 The Dallas Cowboys-Washington Commanders Rivalry Through Time: The Viz

The Cowboys-Commanders rivalry is in its 62nd year. Telling the story comprehensively would take volumes, so we took a crack at showing it with fewer words and more data viz.

The Washington-Dallas rivalry goes back a long way and it was tense and personal from the start.

Washington laid claim to being the southern-most team in the U.S. until oil tycoon Clint Murchison Jr. decided he wanted to buy it. George Preston Marshall, the team’s owner at the time, changed the terms of the deal at the 11th hour and left Murchison infuriated.

When Murchison tried to create a team in Dallas with the help of the NFL’s expansion committee chairman, George Halas, every single owner except one voted in favor. It was Marshall, of course, who didn’t want any competition for his fanbase’s allegiance.

Given the NFL’s unanimous rule on expansion teams, Murchison needed a way to change Marshall’s mind. Murchison had purchased the rights to the Washington fight song after Marshall fell out with the writer of the song and Murchison sold Marshall back the rights for his vote.

These two teams had a history even before the Dallas Cowboys existed.

Dallas has been the best team over the course of the rivalry, winning more games in every decade since the rivalry began.

The Cowboys boast a 75-45 record and hold an advantage in playoff wins, Super Bowls and most of the other categories both within the rivalry and in the NFL in general.

Despite the Cowboys dominance in the rivalry, it would take them four tries before they could get a W against Washington. The first four games saw two Washington victories and a pair of ties. Washington took the historic first meeting, 26-14 at Griffith Stadium. The team was quarterbacked by Ralph Guglielmi, who Washington had drafted in the first round in 1955 out of Notre Dame.

When Dallas finally got its first victory in the series, it came on Nov. 4, 1962 in Washington. Eddie LeBaron and Don Meredith shared snaps at quarterback and both had a couple of touchdowns as the Cowboys ran out 38-10 winners. As an expansion team in 1960, Dallas was able to choose players from different teams and took LeBaron, Washington’s former No. 1 draft pick, as the first QB in the team’s history. The QB had retired in 1959 to focus on his law practice but he came out of retirement to hand Washington its first loss in the series.

Fast forward more than half a century and it’s Dallas who dominates the series.

The Cowboys have won more games in every decade since the beginning of the rivalry. They won 10 to Washington’s seven in the 60s. They won 12, 11 and 12 in the 70s, 80s and 90s and have turned the screw further in the 00s and 10s, winning 14 games to Washington’s six in those two decades.

The Cowboys have won nine of the last 12 games and the most recent meeting was the most significant trouncing in the history of the rivalry. Dak Prescott threw for 330 yards and four touchdowns and his backup, Cooper Rush, came in late in the game and threw for another in a 56-14 win. Not since 1993 have we seen a beating of such proportions between these two teams. That game finished 38-3 with Emmitt Smith rushing for 153 yards and Troy Aikman throwing for 193.

You could say the Cowboys are consistently on the precipice of being elite, but the Commanders are far more volatile, careening wildly from mediocre to terrible to competitive, sometimes all in the one season. Sometimes, all in one game.

The Commanders have only won 10 games or more in a season twice since 2000. The Cowboys, on the other hand, have won 10 games or more seven times since then and have won as many as 13 on two occasions — 2007 and 2016. You would have to go back as far as 1991 to find a season as successful as that for Washington.

It was the 11th season under head coach Joe Gibbs and Washington would ultimately win the Super Bowl with Mark Rypien at QB. He finished the season with 3,564 passing yards and 28 touchdowns. Earnest Byner finished with another 1,048 yards on the ground as Washington finished the regular season 14-2 (Dallas handed it one of those losses).

As explained earlier, Washington’s history goes back a long time before Dallas. Its most successful coach in terms of winning percentage was Dudley DeGroot, who led the team to a 14-5-1 record in 1944. He moved to the Los Angeles Dons after his time in Washington before returning to college football.

The franchise has had some other legendary coaches, including the aforementioned Gibbs, who was considered “the most popular man in Washington,” according to the Washington Post. His 63.1% winning record isn’t the best in franchise history. But his 70.1% winning record in the playoffs (17-7) is. The team would win three of its five Super Bowls with Gibbs on the sideline and he won the NFL Coach of the Year twice (1982 and ’83).

Mike Nixon holds the dubious honor of the coach with the worst winning record in franchise history. In 1959, one year before the Dallas Cowboys were founded, his Washington team went 4-18-2.

The Cowboys have had just seven coaches in their history whereas Washington has had 30. Terry Robiskie had Washington’s shortest tenure in 2000 when he coached for just three games. It was only on an interim basis after Norv Turner was sacked after a 9-7 loss to the New York Giants in December.

Around the same time, Dallas was serving up some of its most tepid football in the franchise’s history. Dave Campo went 15-33 from 2000-02, ending up with the lowest winning percentage in team history. Bill Parcells, the man know as ‘The Big Tuna,’ replaced him and only fared slightly better, leaving in 2006 after three years with a 34-30 record. He did, however, lead them to a 10-6 record and a playoff appearance in his first season.

The Cowboys’ longest-serving coach was Tom Landry from 1960-88. He would leave with a 250-162-6 record and was to Dallas what Gibbs was to Washington. Landry is considered the inventor of the “4-3” defense with coaches like Mike Ditka and Dan Reeves learning under his watch before going on to launch their own successful coaching careers.

During his time, Landry won the NFL Coach of the Year in 1966, led the Cowboys to two Super Bowl titles and to the NFC championship game 10 times in 13 years from 1970-82. The Cowboys dominated the 1970s, reaching the Super Bowl five times. But one day after Jerry Jones bought the team, he fired Landry to usher in a new era in Dallas.

The Cowboys dominance in the ’70s included some impressive streaks against their rival in Washington. On Thanksgiving Day in 1974, Dallas dealt Washington what coach George Allen considered the team’s ‘toughest loss.’ Allen’s team was ready to secure a place in the playoffs with a victory and led 16-3 at the end of the fourth quarter. Clint Longley was in at QB for Dallas after Roger Staubach had been knocked out of the game. In his first NFL game, he threw for 203 yards and two TDs as the Cowboys rallied to win.

The Cowboys beat Washington six consecutive times between 1968-70 and again between 1979-82 before winning 10 in a row from Nov. 16, 1997-Nov. 28, 2002. The streak was snapped when Steve Spurrier’s team beat Dave Campo’s Cowboys 20-14. Campo’s Cowboys would finish the season 5-11 and he would become the only coach not to post a winning season with the franchise.

Tony Romo has accumulated the most passing yards against Washington in Cowboys history with 3,997 and 27 touchdowns in 20 meetings. Troy Aikman is second and Roger Staubach is third on the list.

Emmitt Smith particularly enjoyed playing against Washington. No Cowboy has scored more rushing touchdowns against their rival since 1960. He had 23 scores – far ahead of Ezekiel Elliott’s nine. Smith also holds the record for most rushing yards against Washington with 2,440 in 24 games.

Jason Witten has caught the most receptions against Washington with 137 and he also leads with 1,495 receiving yards following by Michael Irvin’s 1,427. As for touchdowns, Irvin tops that list with 13, followed by Frank Clarke (12) and then Witten (10).

Washington’s Sonny Jurgensen threw for 3,761 yards and 27 touchdowns in 19 meetings with Dallas. Joe Theismann is second on the list with 3,194 yards and 20 touchdowns in 23 games, followed by Kirk Cousins’ 1,919 yards in just seven games.

John Riggins ran for 1,059 yards against the Cowboys – the most in franchise history against their rival – with Clinton Portis second on the list with 766 in 10 games. Riggins has the most rushing touchdowns as well with nine, followed by Stephen Davis with eight.

This is where the two teams diverge most acutely and where the Cowboys superiority really comes into play. Washington has only been to the playoffs six times since 1993 — that’s almost 30 years with relatively zero success. In that time span, the Cowboys have been there 13 times, adding a Super Bowl win in 1995.

The Cowboys are only behind New England (37), Green Bay (36) and Pittsburgh (36) with 35 playoff wins. However, they’ve only won twice in the last 10 years – against the Seattle Seahawks in 2018 in the wild-card round and against the Detroit Lions in the 2014 wild-card round. Washington has won 23 times in the playoffs.

Despite Dallas’ dominance in almost every other category, they have never beaten Washington in the playoffs. They have played each other twice in the postseason – the 1972 and 1983 conference championship games. On both occasions, Washington came out on top. That 1982 meeting was Landry’s last trip to the NFC title game.

It was Gibbs who oversaw the win in 1983, while Allen masterminded the victory in 1972.

The Cowboys have won the Super Bowl five times. Only two teams have more: the New England Patriots and Pittsburgh Steelers with six.

The Commanders have won the Super Bowl on three occasions.

Neither team has won a Super Bowl since 1996 when the Cowboys beat the Steelers 27-17 at Sun Devil Stadium in Tempe, Arizona. They won three of their five in the 1990s, beating the Buffalo Bills in 1993 and 1994 to claim their third and fourth rings.

Washington was also the Bills’ kryptonite in the Super Bowl in 1992, which was the Commanders’ last title.

Aikman holds the record for most yards thrown in a Super Bowl for the Cowboys, throwing for 273 and four touchdowns against the Bills in 1993. Mark Rypien’s 292 yards for Washington in the 1991 victory is second only to Doug Williams’ 340 yards in 1987.

The best thing about a good rivalry is that every game offers a chance for redemption, a chance to write your name in the history books. Despite the Cowboys’ dominance over the last six decades, the Commanders are 2-2 since 2020.

A new season offers fresh hope, a new opportunity and blank pages with history ready to be written by the winners.