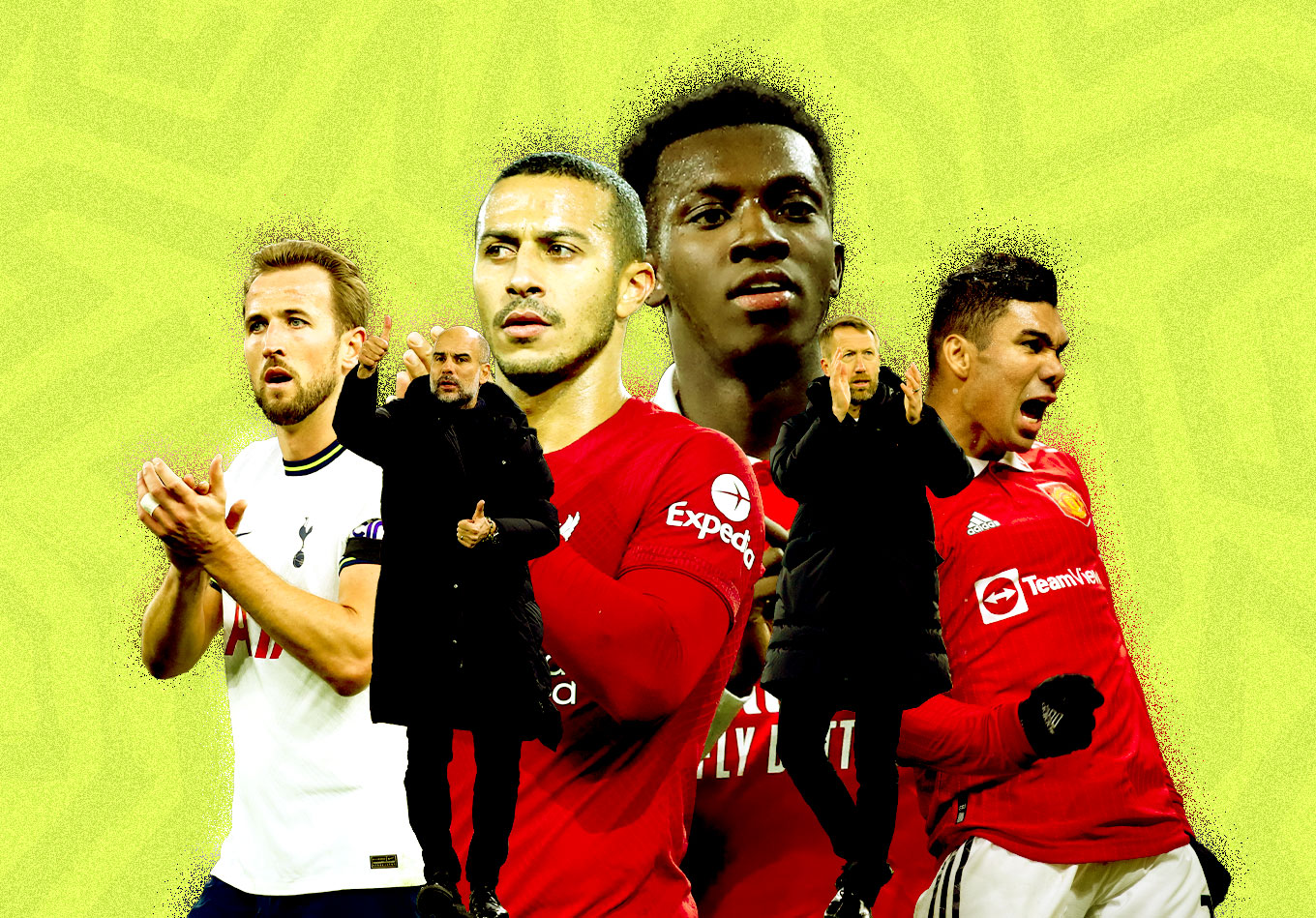 The January Transfer Wishlist for Each Big Six Premier League Side

The January transfer window is upon us, and with it comes the annual mix of desperation and disappointment for supporters everywhere. It is rarely a productive time of discovering missing links, but that won’t stop us pouring over the data and deciding how the ‘Big Six’ should spend all their money this month.

And, to be fair, January 2023 is a bit different. The winter World Cup is likely to cause havoc in the second half of the campaign, providing a rare opportunity to non-Manchester City clubs to put up a title challenge – giving the window a now-or-never urgency for Arsenal and Manchester United in particular.

Here’s a look at where the Big Six have been going wrong in 2022-23 (insofar as some of them have gone ‘wrong’ at all) and what they need to do this month to fix it:

Eddie Nketiah is deputising admirably but he is nowhere near the profile of Gabriel Jesus, a snake-hipped striker whose tireless movement outside the box gave Arsenal their forward thrust. Jesus ranks fourth in the Premier League for progressive passes received per 90 with 7.9 and fifth in the division for attempted dribbles with 4.9. Nketiah actually scores higher on progressive passes received at the moment but this is skewed by a small sample size, and he performs worse per 90 on dribbles attempted, passes made in open play, tackles, and interceptions.

Finding an adequate replacement – a forward able to lead the press and consistently bring Arsenal’s wide forwards into the game – won’t be easy, although Roberto Firmino’s recent links with West Ham suggest he might be available on a short-term deal. Firmino is the perfect fit.

The most important player in the Arsenal team is Thomas Partey, whose press-resistant passing and defensive sweeping gives Mikel Arteta a Rodri-like metronome. He was absent in their only defeat of the season, a 3-1 loss against Manchester United in which Arsenal recorded their highest PPDA of the campaign (17.7) as Albert Lokonga made positional errors for two United goals.

Finally, Arsenal’s pursuit of Mykhailo Mudryk makes sense. As a subtler winger than Gabriel Martinelli he can give Arteta’s side an extra dimension from the left; attacks become a little head-down and one-dimensional once they get to Martinelli, partially explaining why Arsenal rank fourth bottom for switches of play in the league (43).

Graham Potter requires patience. It takes a very long time for such fine-tuned tactical ideas to become muscle memory, hence why his Brighton team won just one of their first nine Premier League matches – and that came after a summer of training and signing players, luxuries Potter has not had at Chelsea. The sheer detail in the positional structure and the attacking automatisms requires hundreds of hours of coaching, and a specific profile of player.

It is a profile Chelsea are short of in key areas. The biggest problem is clearly at the top end of the pitch where Pierre-Emerick Aubameyang’s non-pressing and uber-direct running style has no place in a Potter side, and yet his polar opposite Kai Havertz – a man forever coming short to play backwards passes between the lines – is just as ill-suited.

A lack of penetration in the forward line sees Chelsea endlessly recycle the ball, with a lack of verticality up front and in midfield creating a sluggish system that cannot move the opposition around. This is highlighted most plainly by Chelsea sitting tenth in the table for total progressive passes, with 491.

In attack, they quite simply need quality; at least one forward approaching Eden Hazard levels of fear-inducing creativity and a striker who can fulfil what Romelu Lukaku was signed for. João Félix, Marcus Thuram and Christopher Nkunku have been mooted.

In midfield, they need to invest in more line-breaking and press-resistant midfielders, with Denis Zakaria’s performance against Man City the template to follow. Moises Caicedo from Brighton would be a good addition should Enzo Fernández prove too expensive.

Jürgen Klopp’s system has completely fallen apart, but Liverpool fans need not fear. The sheer complexity and specificity of his gung-ho pressing game means it takes only the slightest change to collapse – and the slightest change to surge back again. It is blindingly obvious that what Liverpool need is one or two new central midfielders to replace what Georginio Wijnaldum brought to the club.

Liverpool’s pressing has fallen off significantly. Last season they had the Premier League’s lowest PPDA with 9.9 whereas this season they have the seventh-lowest of 12.2, while, shockingly, their number of tackles made in the attacking third has dropped from being the division’s best last year (107) to the fourth-worst in 2022-23 (33).

This has had a direct impact on their defending, because without a successful press their high line is exposed and enormous gaps through midfield open up for opponents to counter-attack into. This is captured best by their post-shot xG against, which stands at 30.0, the third worst behind Nottingham Forest and Bournemouth. Even looking at their pre-shot expected goals against total (24.2 overall, the ninth worst in the league), comes with its own story: on average, each shot Liverpool concede is worth 0.14 expected goals, the worst figure in the entire division. It is a combination of good luck and Alisson Becker’s brilliance that has saved Liverpool from disaster. The Brazilian goalkeeper is having another remarkable season, having prevented more than eight goals in the league thus far, a full three goals more than next-best Kepa (5.3).

The cumulative effect of poor pressing and constant opposition counter-attacks is the stretched, disordered, and clumsy matches we are witnessing, best shown in their average progressive pass distance numbers. They are second in the table, behind Everton with 18.9 (by contrast, Man City and Arsenal are both in the bottom three). Liverpool shouldn’t be hitting such long and vertical balls, but the tactical system has disintegrated.

The fix is simple. If Liverpool can find a midfielder capable of sweeping up loose balls, while also holding onto possession under pressure and calmly recycling the ball, they could pin teams back, in turn compressing their own formation into a shape that makes high-pressing easier, closes off midfield gaps, and leads to the waves of attacks we are used to seeing. Jude Bellingham and Caicedo would restore Liverpool.

Despite scoring 21 Premier League goals from just 15 starts, accommodating Erling Haaland has required a complete tactical overhaul at Manchester City. The system is now required to accommodate a player who is barely involved in the build-up play (his 24.8 touches per 90 is the fourth lowest among all Premier League players to have started five or more matches, which is remarkable considering City average 65.9% possession).

Pep Guardiola has been forced to sit his number eights closer to Haaland, in turn leaving Rodri either isolated or requiring interior full-backs to hold the middle, which has decreased City’s urgency and capacity to build through an over-crowded middle. In fact, with Haaland static up front, opponents are finding it increasingly easy to blunt Man City by sitting very deep and narrow. That’s how Brentford and Aston Villa took points against them, how Crystal Palace and Newcastle went two goals up, and how Fulham came within a 94th-minute penalty of drawing.

The biggest knock-on effect of signing Haaland is losing penetrative and direct wingers, with City having dispensed of the Raheem Sterling or Leroy Sane type – always essential to breaking deep blocks for Guardiola. Without one, Man City are a more ponderous team who lack the maverick dribbling needed to go against the grain and break a stubborn back line. They rank fourth bottom for total sprints (2110), and aside from Haaland they have only two other players in the top 50 for total runs made: Phil Foden is 22nd and Kevin de Bruyne is 29th.

Most telling of all, Man City were top last season for shot-creating actions (actions on the pitch that lead to a shot like passes, dribbles or drawing fouls) from a dribble (70) but currently sit all the way down in eighth (17). City’s league position suggests Guardiola’s tactical shift isn’t quite working, and with tiredness likely to be a big factor in the second half of the campaign (nobody came close to their 4633 minutes of World Cup action) more slow performances are on the horizon.

Rafael Leão (who completed the third most dribbles, 98, across the big five leagues last season) or Bukayo Saka would fit the bill, although if Guardiola is committed to his current wingers, then he could look for penetration via an overlapping full-back – something Jack Grealish always needed at Aston Villa. Raphaël Guerreiro is a viable option.

Erik ten Hag’s team is finally starting to look like an Erik ten Hag team. The revolution has been slow, but with Christian Eriksen and Casemiro holding down central midfield we are beginning to see more of the possession dominance and sharp progressive passing we associate with the Dutch manager’s Ajax. That being said, United’s off-the-ball work feels some way short.

Man Utd are tenth for total high turnovers with 135, and yet they sit fourth, with 26, for high turnovers that lead to a shot. That would suggest that United are becoming very efficient in the Ten Hag counter-press but just aren’t doing it often enough. Similarly, they are top for total number of direct attacks, with 41, but 15th for average ‘direct speed’ at 1.32. Again, when they are able to be direct it works well – they just need to do it more often.

Most of this is simply a case of Ten Hag needing more time to get his ideas across, although a hard-pressing centre-forward would be a big help. Marcus Rashford’s 120 pressures applied in the attacking third puts him 13th among strikers and behind even Aleksandr Mitrovic and Odsonne Edouard. Perhaps United are another team who could get a second act out of Firmino.

The other notably weak areas are at right-back (as the below zones of control image indicates), where Antony’s difficulty settling has something to do with the absence of a creative overlapping full-back to draw attention away from him, and in goal, with David de Gea lacking the sweeping or passing ability needed to play in the Ten Hag way. De Gea ranks 16th in the Premier League for total number of goalkeeping actions outside the area, with 15.

Antonio Conte’s tactical preference to sit in a mid-block and, without pressing high, draw the opponent forward before countering behind may simply be unsuitable for a Big Six side. The vast majority of Premier League teams will force Spurs to win the possession and territorial battle, yet Conte’s team rank 18th for pressures in the final third (599) and fifth for pressures in their own third (810). This neatly captures how deeply they engage.

And it explains why Spurs so often seem limp on the ball, with the entire creative side of things depending on Rodrigo Bentancur and Dejan Kulusevski to play neat passes between the lines. Dragging a low-block Spurs up the pitch is a big challenge for these two, and it simply isn’t good enough that a team built for transitional speed should rank 10th for total through balls played (24).

Just 22% of Spurs’ successful passes have ended in the final third of the pitch in the Premier League this season – that’s only higher than Leicester City (20%). Spurs need another central midfielder who can wriggle through midfield or play line-splitting passes. Caicedo would be perfect.

With things so clogged up in the middle, much rests on the crossing ability of Conte’s flying wing-backs and there is a huge disparity between left and right. Spurs top the charts for crosses from open play (280) yet while Ivan Perisic ranks third in the league (65) Emerson Royal is all the way down in 29th (34). Denzel Dumfries is the sort of attacking wing-back Conte would love.