How Good is Enzo Fernandez? | The Analyst 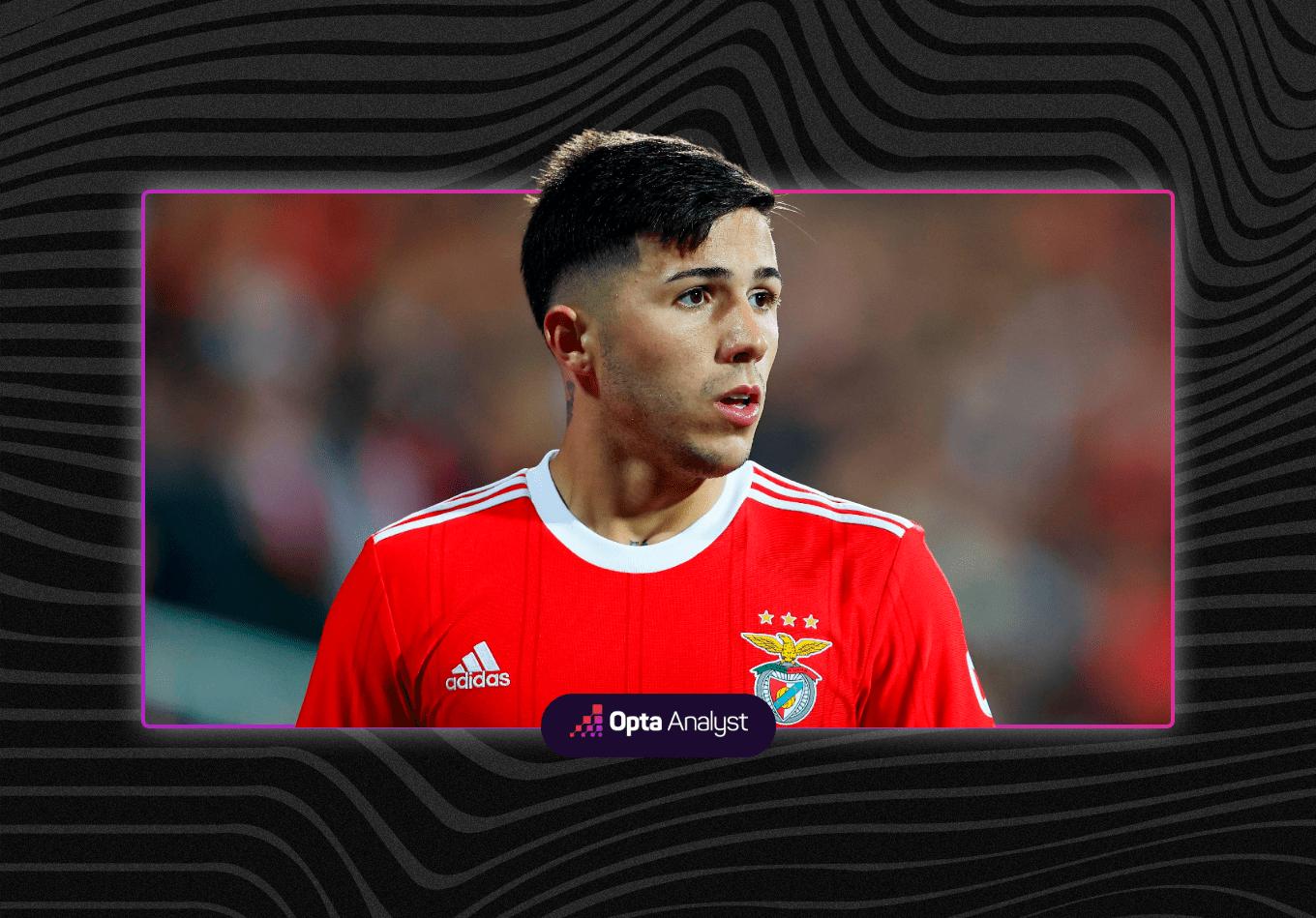 How Good is Enzo Fernandez?

On 2 August 2022, 21-year-old Enzo Fernández made his Benfica debut in a UEFA Champions League third-round qualifier against FC Midtjylland. He was uncapped at senior international level for Argentina and his move to Portugal was his first foray into European football.

138 days later, the young midfield maestro is a world champion with Argentina, was named the FIFA Young Player of the Tournament in Qatar, is an integral part of a Benfica side that is top of the Primeira Liga, has gained passage into the UEFA Champions League knockout stages helping As Águias top their group ahead of Paris Saint-Germain and Juventus, and he has yet to lose a single match for his new club. It’s fair to say that Enzo Fernández’s rise has been nothing short of meteoric.

The 2022 World Cup was the stage where many around the world will have first caught a glimpse of this all-action midfielder, but fans of the Primeira Liga will have known just how special the man from San Martín is from the moment he arrived in Lisbon.

As we head towards the January transfer window, Fernández is one of the most sought-after midfielders in Europe and his remarkable form for Benfica has led many to believe he is the best player in Portugal. This is the story behind his ascent and why multiple clubs are seemingly prepared to break the bank to acquire his services.

Let’s rewind to June. How things could have been so very different for Fernández. After impressing for River Plate, Premier League club Wolves quickly emerged as favourites to acquire the young talent, so much so that the Midlands club reportedly sent sporting director and former chief scout Matthew Hobbs to Argentina to finalise the deal. AC Milan and Benfica were also very interested in securing Fernandez’s signature but at this point in time, it seemed Wolves were in pole position.

A day later, Fernandez confirmed his intentions in a post-match press conference, confirming that he would be joining Benfica but he wouldn’t be leaving River until December, staying instead to fight for the Copa Libertadores title.

This didn’t quite go to plan for Fernández (or River) in that tournament though. Just two weeks after agreeing a deal with Benfica, River were dumped out in shock fashion in the first knockout round by Vélez Sarsfield. Despite Benfica bracing themselves for their new midfielder to arrive at the back end of 2022, they had their man in July.

Enzo Fernández can quite literally do it all and that’s one of the key reasons he’s become such an integral part of this unbeaten Benfica side.

A pass master, a box-to-box midfielder, a deep-lying playmaker, a tough-tackling ball-winner. Those are just some of the descriptions that have been used to describe Fernández since his arrival at Benfica, and such is his versatility, each description holds merit. South America to Portugal is a path that is well trodden but not every player can adapt instantly. In the case of Fernández however, he has acclimatised to Portuguese football seamlessly, putting in virtuoso performances with remarkable consistency.

Fernández is deployed as part of a double-pivot in midfield, usually playing alongside Florentino Luís in Roger Schmidt’s 4-2-3-1 formation. He is somewhat of a footballing chameleon; without the ball, he possesses great defensive attributes and instincts and can often be found using his intensity and aggression to win the ball back for his side. However, his superb quality on the ball means that he is also a real threat in possession and is a midfielder who can bring Benfica up the pitch and into the attacking third through the use of his expansive passing range.

He is a player who is seemingly always on the ball, always moving, always dictating and his effervescence in possession is, unsurprisingly, reflected in the data.

He is currently averaging 96.4 successful passes per 90 minutes, 20 passes more than any other Primeira Liga midfielder to play 800+ minutes this season (Florentino next on 76.3).

It’s not just the sheer volume of passes Fernández makes, but more crucially it’s his ability to pick the right pass at the right time. He uses his short passing range to dictate proceedings and keep Benfica moving whilst they patiently wait for an opening against what is often a stubborn, deep opposition defence, particularly in the Primeira Liga. Should the opportunity present itself, the World Cup winner will opt to go more direct and switch the ball from one side of the pitch to the other, in an attempt to change it up and catch the opposition out.

Fernández has one particular pass in his locker which has become almost a trademark of his game. A perfectly struck long switch from the left-hand side of midfield to the right-wing, usually for David Neres to run on to. It’s a tool which Benfica utilise time and time again to get Neres in behind stubborn defences allowing the Brazilian winger the space to either cut back a pass across goal or to provide a cross. Of the 22 switches Fernández has made so far, 18 have been successful, giving him a very healthy 82% pass accuracy for what can be a tough pass to execute. The pass map below shows that trademark left-to-right switch.

No performance has encapsulated Fernández’s passing ability and supreme quality on the ball more than his display against Rio Ave in the Primeira Liga back in October. For starters, the Benfica man played 72 passes without misplacing a single one.

But what defined the performance was that the passes weren’t just safe, side-to-side ones, but they were progressive and incisive. Fernandez created six chances, four big chances, completed seven long passes and provided an assist, all without losing the ball. It was an incredible midfield performance from a player in total control of the game.

Due to his deep starting position on the pitch, he doesn’t provide bundles of assists (just two from open play this season) but he is still very much heavily involved in the build-up to goals, often providing a killer pass to progress Benfica up the pitch, finding the likes of Rafa Silva, David Neres or João Mário in areas where they can create a chance. The fact that Fernández’s open-play expected assists rate of 0.32 per 90 minutes is good enough for second in the entire league, suggests he may be unfortunate to only have two assists to his name so far.

But even more tellingly, Fernández ranks first in the entire league for most attacking sequence involvements per 90 minutes and ranks third in the league for secondary chances created with 16, bettered only by team-mates João Mário (18) and Rafa Silva (17).

We know what Enzo Fernández can do with the ball, but without the ball, he is more than capable of performing at the highest level. In the UEFA Champions League, we see this midfield chameleon operating in almost a completely different role, bringing his defensive skillset to the table. In Europe’s elite footballing competition, Benfica come up against much stronger opposition than in the Primeira Liga, facing off against sides such as Paris Saint-Germain where Benfica have to concede possession for longer periods in the match and have to remain switched on against more potent attacks.

His versatility and confidence in both the defensive and attacking areas of the pitch are part of why he is so highly rated. It’s especially rare to see a midfielder have so much technical quality on the ball but be so aggressive and defensively astute without it.

His performance away against European heavyweights Paris Saint-Germain was a testament to his defensive capabilities. Fernández operated in a slightly deeper role, shuttling side to side in front of the back four, remaining vigilant throughout the periods of Paris possession. He made three interceptions, three tackles and won three of his duels – with the majority of his actions coming in his own half. Benfica had just 38% possession so when they did have it, it was vitally important that they used it efficiently. Fernández did just that, completing six of his seven long pass attempts and ending the match with a 91% pass accuracy as Benfica earned a valuable point at the Parc des Princes.

His intelligence when out of possession means that he rarely steps out to make an interception or a tackle at the wrong time. When he does go hunting for the ball, his tenacity and aggression make him a nightmare for opponents to try and play around. In the 2-1 win against Juventus in Turin, he put in another all-action display, bounding all over the pitch for Benfica and affecting the game at both ends. He finished the match having completed the most tackles with seven, completed the most passes with 71, had the best pass accuracy of any player to start the match with 95.7% and had the most touches with 92.

In what was his first real test at this level against a side with European pedigree, he passed with flying colours.

To get a sense of just how quickly Fernández has risen to prominence, he didn’t make his Argentina debut until late September. Since then, he has gone from strength to strength for La Albiceleste, forcing his way into Lionel Scaloni’s plans midway through the 2022 World Cup. In the match against Mexico, he came off the bench to score his first international goal, and from that point on he started every single game as Argentina marched towards their first World Cup triumph in 36 years.

In the World Cup final against France, Fernández put in a barnstorming performance in the middle of a midfield three, with Rodrigo de Paul and Alexis Mac Allister either side of him. Fernández was metronomic, switching the play from side to side and helping Argentina maintain a steady rhythm. The 21-year-old completed the match with the most touches (118), the most completed passes (91), made the most tackles (10) and was second for accurate long balls (5).

To perform at such a high level, in a game of such magnitude, despite being a relative newcomer to the international scene simply epitomises how comfortable and confident Fernández is when playing at the very highest level.

What Next For Enzo?

Fernández came into the FIFA World Cup being closely monitored by several European giants. The ease at which he has adapted to European football, both domestically in Portugal and in the Champions League will have reassured any potential suitors. His performances in Qatar will have simply exacerbated the interest in him from the many clubs sniffing around. Real Madrid, Liverpool, Chelsea and Manchester United are just some of the latest names being strongly linked with the Benfica man, with the Blues reportedly the closest to sealing his signature.

Benfica president Manuel Rui Costa spoke recently in an interview given to BTV, offering partial reassurance to the legion of Benfiquistas that Fernández is staying put, at least until the summer. The former Portugal international claimed that “this is a sporting project, not a financial one. Fortunately, we are not experiencing financial problems and we don’t need to sell players to cope with anything in financial terms”. He went on to add that the only way a fundamental player in Roger Schmidt’s team would leave in January is if their release clause is triggered.

According to reports, Fernández has a release clause of €120 million. With Benfica in pole position to win their first Primeira Liga since 2018-19 and into the knockout stages of the UEFA Champions League, it comes as no surprise that they do not want to prematurely offload someone as pivotal to the team’s success as Enzo Fernández. Roger Schmidt’s side could very well go on to have a special season and they will need the likes of Fernández to stick around if they are to make it happen.