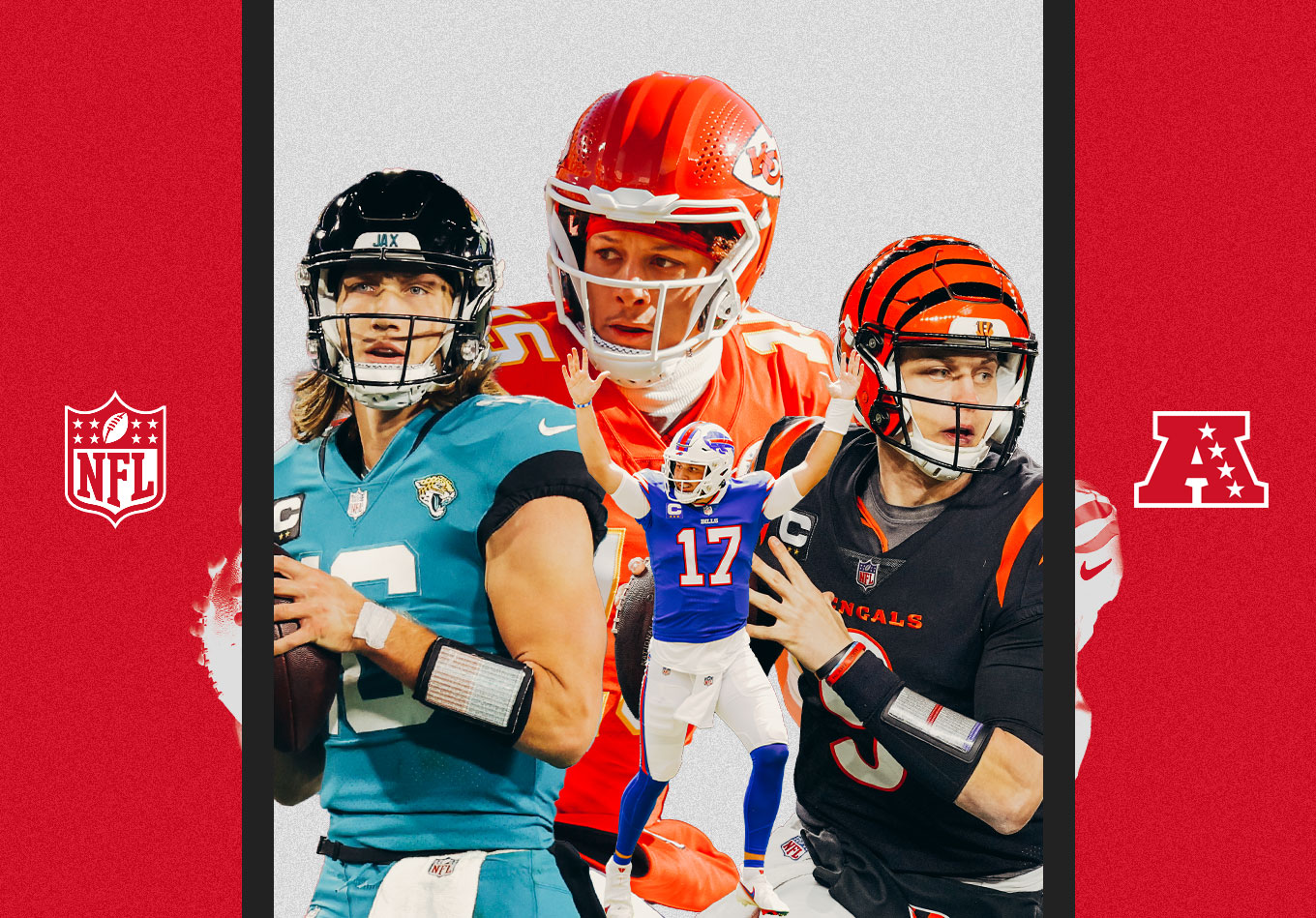 And just like that, we’re down to seven games left in the 2022 NFL playoffs.

While the Super Wild Card Weekend had plenty of drama, this is when the real fun begins.

The best four teams from each conference are on display. Say goodbye to some of the pretenders who really had little shot of reaching the Super Bowl (the seventh-seeded Miami Dolphins and Seattle Seahawks) and hello to the real championship contenders (the top-seeded Kansas City Chiefs and Philadelphia Eagles).

In fact, since the calendar flipped to November, the eight teams still alive in the playoff picture have a combined .791 winning percentage (including the wild-card round). Since the league expanded the playoffs in 1990, never before have the eight teams playing in the divisional round had a combined winning percentage this high since the start of November.

There’s no shortage of storylines among the final four AFC teams still standing.

The surprising Jacksonville Jaguars face a Chiefs team seeking a fifth straight berth in the AFC championships game, while the Bengals and Bills square off again less than three weeks after their game was canceled after Bills safety Damar Hamlin went into cardiac arrest and needed to be resuscitated on the field.

We’ll take a look at these two divisional playoff games and break down some of the key matchups that could go a long way in determining which teams will advance to the AFC championship game and one step closer to Super Bowl LVII.

Given that the Chiefs have the league’s top-ranked scoring offense, a quarterback in Patrick Mahomes who is the front-runner to capture his second NFL MVP and a target who is on the Mount Rushmore of tight ends in NFL history, it’s understandable that Kansas City’s defense gets overshadowed. The defense, however, is no slouch.

It’s obviously not at the same level as the 49ers or Eagles, but it’s plenty capable of giving opponents fits, ranking ninth in defensive EVE (Efficiency Versus Expected) and allowing 0.361 yards fewer than expected on all defensive plays.

Much of the defensive success starts up front with KC’s propensity for putting pressure on the quarterback. The Chiefs’ 55 sacks trailed only the Eagles for the most in the league during the regular season and they finished ninth in the NFL with a 41.2 pressure rate.

Kansas City racked up five of those sacks in a 27-17 win over Jacksonville in Week 10 at Arrowhead Stadium while pressuring Trevor Lawrence on 13 occasions. Chris Jones was credited with 1.5 sacks of Lawrence, and has been the motor of Kansas City’s pass rush all season.

In the regular season, Jones ranked second in QB hurries (55.5) and third in QB hits (29) while his 15.5 sacks tied the New England Patriots’ Matthew Judon for fourth in the NFL. He’s been a nightmare inside, recording a 20.7 pressure rate – third highest among 75 defensive tackles with a minimum of 100 pass rushes – while he was also sixth among qualified defensive tackles with a 58.0 matchup win rate.

The good news for the Jaguars is Lawrence has been sacked a grand total of six times during Jacksonville’s current six-game winning streak. Since the win streak began in Week 14, Lawrence has the fourth lowest sack rate (2.7 per 100 pass plays) among the 35 QBs with a minimum of 60 attempts.

The bad news for the Jags, though, is beginning the week after their loss at Arrowhead, Kansas City has registered an NFL-best pressure rate of 46.9.

More bad news for the Jags is right guard Brandon Scherff has been shaky in pass protection during Jacksonville’s winning streak.

In the Week 10 matchup, Jones beat Scherff with a swim move to sack Lawrence, and Scherff will likely have his hands full again in keeping Jones off his QB.

Since the Jags’ win streak began in Week 14, Scherff’s pressure-allowed rate of 13.1 ranks 53rd among the 55 guards with a minimum of 75 plays in pass protection. He’s been responsible for two of the sacks on Lawrence during the win streak and was also beaten by Khalen Saunders for a sack on Lawrence in the first matchup.

One positive for the Jaguars up front is that Jawaan Taylor, the tackle who lines up next to Scherff, has been solid over the last six weeks. Although he was also beaten by Jones when he lined up on the outside and sacked Lawrence on a third-and-goal in the Week 10 matchup, Taylor has surrendered just one sack in the last seven games – that marks the only time his man knocked down Lawrence since Week 14. No offensive tackle with as many plays in pass protection as Taylor’s 155 since Week 14 has surrendered one or fewer quarterback knockdowns.

The Jags are also hopeful the tackle on the opposite side of the line, Walker Little, can replicate his performance from last week. Little took over at left tackle after Cam Robinson suffered a serious knee injury in Jacksonville’s Week 16 win over the Dallas Cowboys and things got off to a rocky start. In the final three weeks of the season, Little’s 15.5 pressure-allowed rate was the third worst among the 27 left tackles with a minimum of 50 plays in pass protection. In Jacksonville’s stunning 31-30 comeback victory over the Los Angeles Chargers in its postseason opener, however, Little won all 41 of his plays in pass protection.

The tackles will likely see Jones lining up on the outside at times, with defensive end George Karlaftis being their primary concern. Karlaftis’ six sacks on the season were the second most by a Chief and his adjusted sack rate of 6.7 over the final five weeks of the season ranked ninth among the 66 edge rushers with a minimum of 50 pass rushers.

For the Jaguars to keep up with the high-powered Chiefs and pull off the upset, they can’t afford to have a repeat of what happened last time at Arrowhead with their offensive linemen picking Lawrence off the turf after being sacked. Jacksonville is 8-2 this season when Lawrence is sacked zero or one time compared to going 2-6 when he’s sacked at least twice.

An entire passing game against the pass defense is quite broad for a key matchup, but there are several reasons why Cincinnati’s offense is both dangerous and vulnerable right now.

We’ll start up front seeing as that is the biggest concern at the moment for the Bengals and will obviously impact the contributions of their skill position players.

In the span of three games, Cincinnati has lost three starting offensive linemen. First, right tackle La’el Collins suffered a torn ACL and MCL on Christmas Eve, then right guard Alex Cappa injured his ankle in the season finale, and finally, left tackle Jonah Williams sustained a knee injury in the 24-17 first-round victory over the Baltimore Ravens on Sunday night.

Prior to the unlucky parade of injuries, Collins had appeared in 97.3% of Cincinnati’s offensive plays through Week 15, while Cappa took part in 99.3%, and Williams in 99.4% of offensive snaps. These three were essentially on the field for every play the Bengals ran through mid-December and now Cincinnati is forced to rely on backups at 60% of its offensive line positions due to injuries.

While Andeniji has helped shore up the void at right tackle, backup Jackson Carman struggled in limited work at left tackle after Williams went down in the wild-card game. In 28 offensive plays, Carmen posted a pressure-allowed rate of 18.2 and an adjusted sack-allowed percentage of 9.1. He permitted a sack and was called for one holding penalty.

Max Scharping has taken over at right guard since Cappa’s injury, and like his neighbor to the right in Andeniji, has also found success, producing a pressure-allowed rate of 3.2 – fifth best by among the 30 right guards that have appeared in at least 20 pass plays in the last two weeks.

The Bills’ defensive front would seem to have a significant advantage going up against the Bengals’ patchwork offensive line, but Buffalo has struggled to generate consistent pressure on the quarterback since Von Miller suffered a torn ACL on Thanksgiving.

Defensive tackle Ed Oliver has seen a dip in his ability to get in the quarterback’s face since Miller was lost for the season, producing a pressure rate of 11.4 since December after generating a clip of 14.2 through the season’s first 12 weeks.

There is some reason for optimism, though, as edge rusher Greg Rousseau, who initially struggled to carry the mantle in the wake of Miller’s injury, has routinely been in the opponents’ backfield the last two weeks.

In the first four games after Miller’s injury, Rousseau recorded a pressure rate of 16.7 – down from 22.6 when he was lining up opposite Miller and opposing offenses were game planning to thwart the pass rush of the eight-time Pro Bowler. In Buffalo’s 35-23 win over New England in the season finale and 34-31 wild-card victory over Miami, however, Rousseau had a combined pressure rate of 27.9.

While Cincinnati’s offensive line will undoubtedly be under the microscope, the fact that the Bengals have a steady quarterback and perhaps the best wide receiver trio in the NFL certainly helps take some of the burdens off the reworked o-line.

Joe Burrow and his elite pass-catchers already have proven they can step up. Since Week 16 when Collins was injured, Ja’Marr Chase, Tee Higgins and Tyler Boyd have all been getting open at a higher rate – Chase has an 83.3 open percentage compared to 69.1% through Week 15, Higgins is at 77.3% compared to 68.8% and Boyd 92.9% compared to 67.6%.

The ability to beat the opposing defensive back, obviously makes things easier on Burrow, and Joe Cool has shrugged off the pressure behind the makeshift offensive line in recent weeks. Although the time for him to throw the ball after receiving the snap has been exactly the same while under pressure in the last four weeks compared to the first 15 weeks of the season, he’s throwing a better ball and averaging more yards on his passes.

While Chase, Higgins and Boyd all have shown an increased proficiency at getting open in recent weeks, finding open space in the Buffalo secondary is easier said than done, as Taron Johnson and Tre’Davious White have been two of the best shutdown cornerbacks in recent weeks.

Despite the drop in pass rush since Miller’s injury, pass coverage by Johnson and White hasn’t been an issue. Among the 50 cornerbacks who have been targeted a minimum of 25 times since Week 13, Johnson’s burn-allowed percentage of 31.6 is the fourth lowest. White has registered a 42.1, while the NFL average for these 50 corners sits at 48.7.

Dane Jackson hasn’t been as reliable as Johnson and White, but has seen an improvement in burn-allowed percentage since Week 13, dropping to 50.0 from 63.5, which was the fourth-worst rate among the 60 corners targeted at least 40 times through Week 12.

So while there will no doubt be plenty of scrutiny on a Cincinnati offensive line that is using its fourth alteration in as many weeks, Buffalo’s defensive front and secondary faces similar pressure in this divisional-round matchup as the team looks to advance in the NFL playoff bracket.

The Bills’ inconsistent line tries to take advantage of a seemingly overmatched opponent, while the defensive backs are tasked with containing one of the most talented wide receiver trios in the NFL.