Stealing Victory From the Jaws of Defeat: The Biggest Comebacks in NFL History | The Analyst 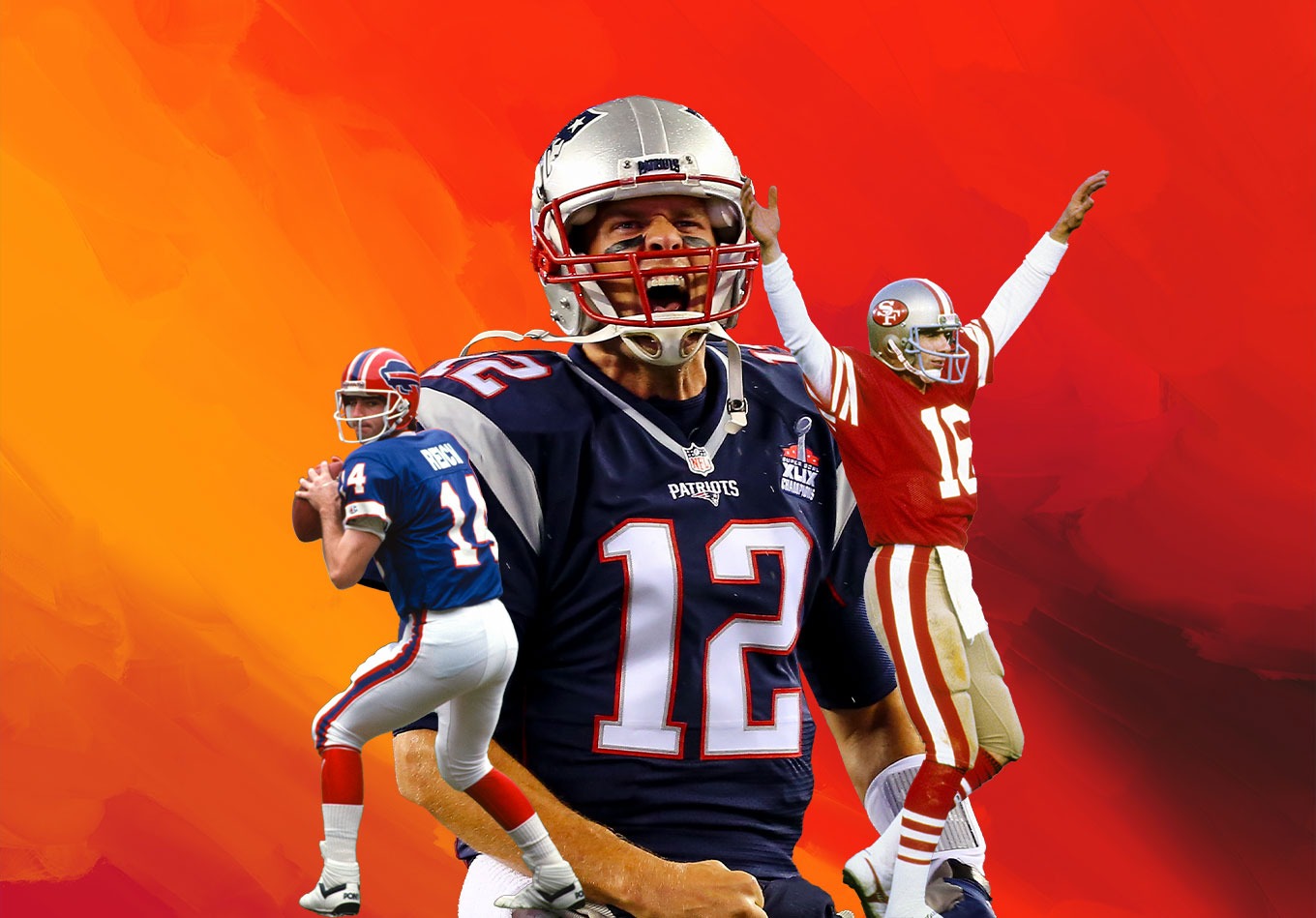 Stealing Victory From the Jaws of Defeat: The Biggest Comebacks in NFL History

When we witness the greatest comebacks of all time, they’re so memorable largely because they’re so dramatic and rare.

In fact, the New England Patriots had the best record of any current franchise when trailing by 21 points at any point in the game at 7-106 heading into the 2022 season. That’s a minuscule .062 winning percentage that serves as the NFL standard for best comeback clubs.

If we look at all franchises going back to 1925, the Patriots’ seven such rallies have been the most of any team. The Denver Broncos, Baltimore/Indianapolis Colts, Oakland/Los Angeles/Las Vegas Raiders, St. Louis/Los Angeles Rams and Philadelphia Eagles each had five.

The worst franchises when down big? It might be hard to believe given their long history in the league, but entering 2022, the Chicago Bears had never won a game in which they trailed by at least 21 points at 0-175.

The Carolina Panthers had gone 0-63 in those situations, while the Cleveland Browns were 1-143, the Tampa Bay Buccaneers were 1-122, the Seattle Seahawks had gone 1-101 and the Kansas City Chiefs were 1-100.

But when it does happen, it’s such a momentous, thrilling event that the game becomes known by given names like “The Comeback” or “The Monday Night Miracle.”

The following are the biggest comebacks in NFL history, with regular-season historical data going back to 1925 and postseason information since 1933.

It was the week before Christmas and the Minnesota Vikings were cruising to an NFC North title at 10-3. The Indianapolis Colts (4-8-1) had endured a difficult season having fired Frank Reich and replaced him with Jeff Saturday, former offensive lineman turned consultant turned head coach. But the Vikings trailed 33-0 at halftime and 36-7 with 4:59 remaining in the third quarter before momentum shifted. C.J. Ham rushed for a touchdown and Justin Jefferson caught another. Even when Adam Thielen caught one in the end zone with 5:34 left in the game, the Vikes still trailed 36-28. But then Dalvin Cook took a pass from Kirk Cousins to the house from 64 yards out and T.J Hockenson caught the two-point conversion to push the game to overtime. Greg Joseph completed the biggest comeback in NFL history with a 40-yard field goal with three seconds left in OT. Cousins, who was sleepwalking through the first half, ended up with a career-high 460 yards passing and four TDs.

It’s known as the game that started the legend of Joe Montana. The 49ers trailed by 28 points in the third quarter before the eventual Hall-of-Fame quarterback took over this NFC matchup. After he had a one-yard TD run, Montana hit Dwight Clark on a 71-yard pass and Freddie Solomon from 14 yards out to cut the deficit to 35-28. Lenvil Elliott’s 7-yard run tied the game with 1:50 left before Ray Wersching’s field goal won it in overtime. Bill Walsh called it one of two games that produced “absolute euphoria” over his lengthy coaching career.

After four Cary Blanchard field goals in the second quarter, the Bills had fallen behind the Colts 26-0 at halftime. But Todd Collins and Antowain Smith led Buffalo to one of the biggest comebacks in NFL history. Collins, who was in his first season taking over for Bills legend Jim Kelly, threw two touchdown passes, while Smith’s third second-half score gave Buffalo a 37-29 lead. The Bills, however, had to survive a late rally by Jim Harbaugh, who became known as “Captain Comeback” himself. ”I knew we were capable of coming back,” Collins told reporters.

In front of just 22,449 fans – the Cardinals’ lowest attendance in four years – Neil Lomax threw three touchdown passes as St. Louis rallied from a 28-3 deficit to pull off the biggest fourth-quarter comeback in league history. Detectives had reportedly been assigned to owner Bill Bidwill due to death threats after the team announced it planned to move out of St. Louis. The Buccaneers had a chance to send the game to overtime, but kicker Donald Igwebuike’s 53-yard field goal attempt bounced off the crossbar as time expired.

In a thriller that became referred to as “The Monday Night Miracle,” the Jets stormed back from a 30-7 hole in the fourth quarter to stun coach Dave Wannstedt’s Dolphins in overtime. Vinny Testaverde had five TD passes. John Hall’s 40-yard field goal won it in overtime. Testaverde, Sage Rosenfels (Oct. 21, 2007) and Tua Tagovailoa (Sept. 18, 2022) are the only players to throw for four fourth-quarter scores in the past 30 years.

OK, try to follow along. Backup Wade Wilson started because Tommy Kramer was banged up, struggled, was benched, and then returned to lead the Vikes to an unlikely victory after trailing 23-0 in the fourth quarter. Wilson re-entered the contest after rookie Steve Bono went 1 for 10 for 5 yards in the third quarter, completing 7 of 13 passes for 143 yards and three touchdowns – including the go-ahead 42-yard score to Anthony Carter with 1:11 left.

At Maryland, Frank Reich had replaced starter Stan Gelbaugh and led the Terrapins back from a 31-point deficit to beat Miami 42-40 on Nov. 10, 1984. With Jim Kelly out due to a knee injury, Reich was in a position to engineer another epic rally when Buffalo fell behind 35-3 in the third quarter of the 1993 AFC wild-card game. It didn’t help that star running back Thurman Thomas was also knocked out with a hip injury, but Reich threw four touchdown passes in the second half – three to wideout Andre Reed – and Steve Christie’s game-winning field goal made history in overtime. It’s known as “The Comeback” in Buffalo and “The Choke” in Houston.

Facing a seemingly insurmountable 38-10 hole in the third quarter, Andrew Luck awoke from his first-half slumber to throw three of his four touchdown passes over the final two quarters. He also picked up a Donald Brown fumble and pushed it into the end zone to cut the deficit to 41-38. After a Kansas City field goal, Luck found wide receiver T.Y. Hilton on a 64-yard pass to give the Colts the dramatic AFC wild-card victory.

It was a tale of two halves. In his first playoff appearance, Trevor Lawrence threw four interceptions over the team’s first six drives as the Jaguars fell behind 27-0 with 4:25 left in the second quarter of this wild-card game. Lawrence, however, threw four touchdown passes over the team’s next six drives to become the first quarterback in NFL history to have four consecutive picks without a TD pass and then four straight TD passes without an interceptions in the same game (regular season or postseason).

It didn’t look good for Tom Brady’s legacy when the Patriots trailed 28-3 in the third quarter of Super Bowl LI, but then the greatest ever captained the greatest comeback win in the game’s 51-year history. The 39-year-old QB set Super Bowl records with 446 passing yards, 62 passing attempts and 43 completions as the Pats reeled off 31 unanswered points. “Tom has had a lot of great ones. Tonight was one of them,” New England head coach Bill Belichick told reporters.