National Championship Prediction: What to Watch for in the TCU-Georgia CFP Title Game | The Analyst 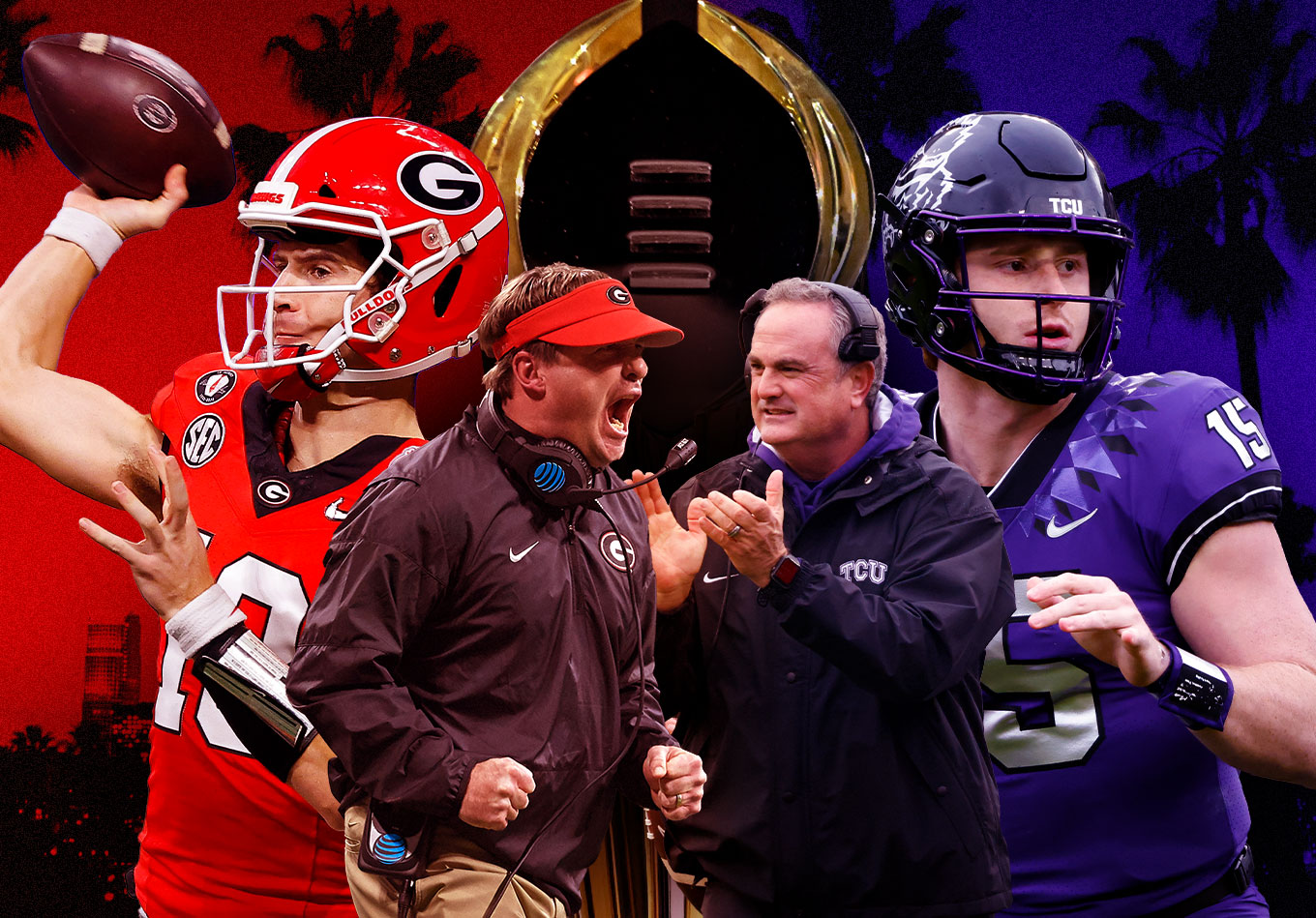 From back-and-forth touchdowns by Michigan and TCU to Georgia making an epic comeback and advancing when Ohio State missed a last-second field-goal attempt, we saw two of the best bowl games in recent memory.

Now it comes down to this at SoFi Stadium in Inglewood, California. The Georgia Bulldogs versus the TCU Horned Frogs in the national title game. Both Big Ten teams are out. Will Georgia win back-to-back CFP national championship games, or will TCU find yet another way to win?

TRACR, our college football team metric, will help us break it down. TRACR (Team Rating Adjusted for Conference and Roster) is a net efficiency metric that evaluates how well a team performs based on who it plays. The model, which is trained on over 10 years of college football data, rewards big wins over good teams and punishes losses to bad ones or even wins that are closer than expected.

It is interesting to note that, despite playing for the championship, TRACR does not rate Georgia or TCU as the top teams statistically. The defending national champion ranks third, while TCU ranks sixth. Alabama is TRACR’s top team in the country, but the Tide failed to make the playoff because of their two (close) losses.

Despite the loss, Ohio State still ranks higher than Georgia, but only slightly. Hey, the Buckeyes were leading late and a kick away from winning. If those two teams were to play 1,000 times at a neutral site (like a playoff game), TRACR would expect the Buckeyes to win slightly more often.

Can TCU once again pull off the upset? The Horned Frogs were the underdog against the Wolverines but led the entire game. It was not just the explosive offense that led the way as two Pick 6s ended up deciding the outcome. Everything went well for them, from a 76-yard pass (but mostly run!) play to Quentin Johnston to Max Duggan’s two touchdown runs.

Going into the game, it felt as though Duggan needed to have a perfect game to beat Michigan. He did not, completing only 48.3% of his passes and throwing two interceptions. It turned out to be the running game that was key as Emari Demercado averaged an astounding 8.8 yards per rush, including a 69-yard run that set up TCU at the goal line. TCU was the only team this season to outgain Michigan on the ground.

Sure, luck played a part. Michigan had costly turnovers, including the Pick 6s and a fumble at the goal line (right after a play that could have easily been ruled a touchdown). Credit to TCU, however, for capitalizing on mistakes and making big plays throughout the entire game.

The Horned Frogs can do exactly what they did against Michigan to beat Georgia. Ohio State had four different receivers with 25-yard completions. TCU did the same with Johnston and has a better running game than the Buckeyes. While Duggan might not be as talented as CJ Stroud, he has shown time and time again this season that he can make big plays to win games. He can throw two interceptions like he did against Michigan and they can still win.

Georgia will need to convert on third down and make stops on third down. The Bulldogs went 2 for 10 on third down against Ohio State, which also scored on five of its first eight possessions. Credit to them for stopping the Buckeyes late in the game and outscoring them 18-3 in the fourth quarter.

But will it be enough? If TCU gets out to a fast start like in the Fiesta Bowl, it will be just as hard to come back as it was against Ohio State. But hey, they did come back.

We talk so much about Duggan finding ways to win, but fellow Heisman Trophy finalist Stetson Bennett did just that against Ohio State. He did throw an interception that led to a Buckeye TD, but was near perfect for the rest of the game, throwing for 398 yards and three TDs, as well as rushing for a score that tied the game on the extra point.

Bennett will need to rely on Brock Bowers more in order to get by TCU. Bowers had just one completion entering the fourth quarter of the Peach Bowl, but was able to catch three more passes in the fourth to key the comeback.

The star tight end led the Bulldogs in receiving yards (790) and TDs (six). Darnell Washington, Georgia’s other star tight end, is questionable after injuring his leg against Ohio State. The 6-foot-7, 270-pound junior is also a huge part of Georgia’s blocking schemes.

TRACR gives Georgia the slight edge with a 57.1% chance to win with an average margin of 2.7 points. After two stellar semifinal games, it will be difficult for this one to match that level of excitement, but TRACR projects another thriller that could come down to yet another field goal.