College Football Predictions: Our New TRACR Model's Teams and Units to Watch in 2022 | The Analyst 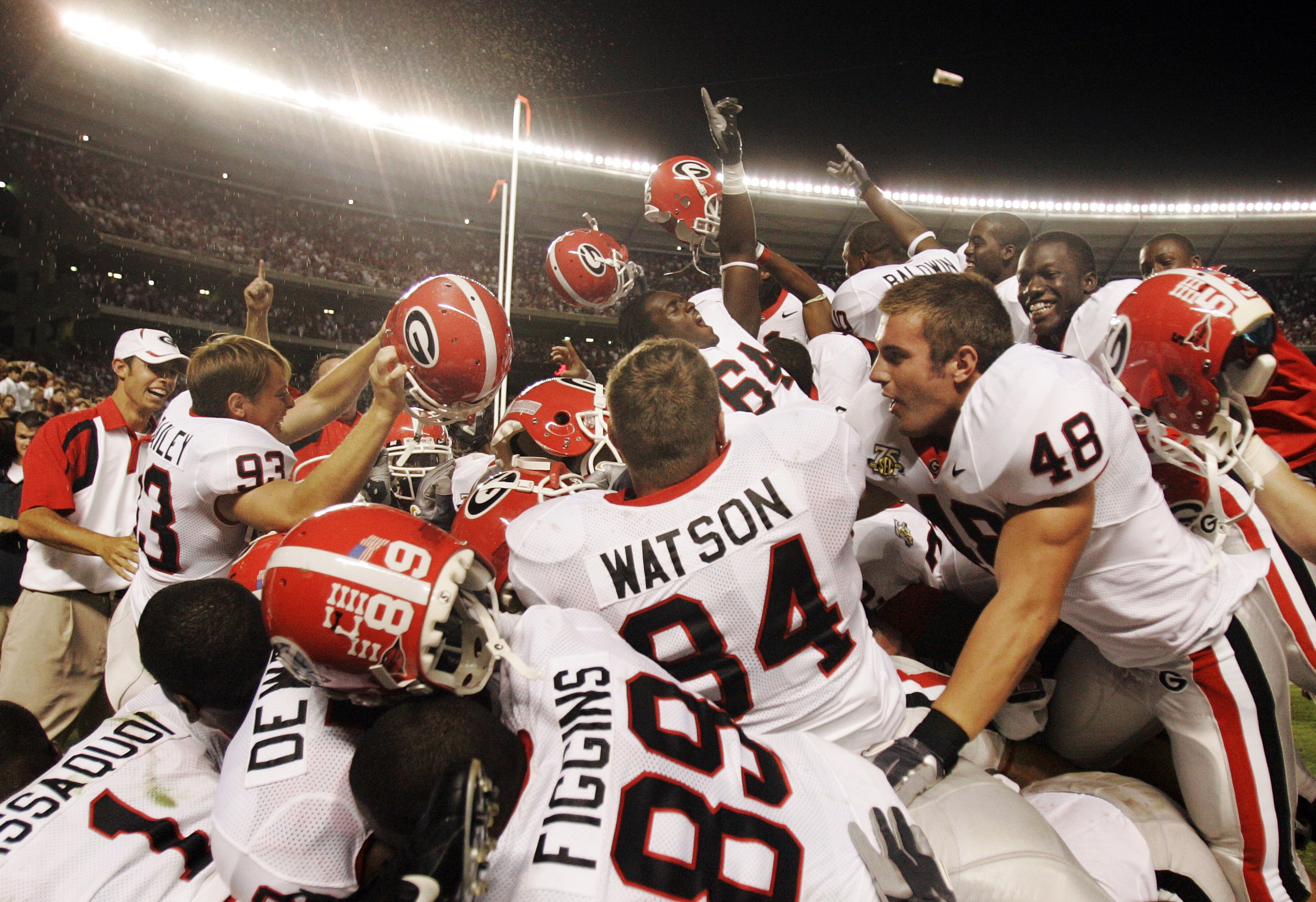 College Football Predictions: Our New TRACR Model’s Teams and Units to Watch in 2022

Oh, how sweet it is to be back.

Only a few days remain until we no longer have to suffer without college football. There will be games on Saturdays from now until the end of the year. If that does not excite you, then I do not know what will.

Which teams look dominant heading into the season? Who will be a surprise? All of this can be answered with our new college football TRACR.

Much like the college basketball version, this TRACR (Team Rating Adjusted for Conference and Roster) is a net efficiency metric that evaluates how well a team performs based on who they play. The model, which is trained on over 10 years of college football data, rewards big wins over good teams and punishes losses to bad ones or even wins that were closer than expected.

Since no games have been played so far, TRACR is currently relying on past performance, percentage of returning players on both offense and defense, as well as incoming recruitment rankings for every FBS team. This creates an offensive and defensive rating for every team – calculating the difference between those two numbers gives an overall rating.

Utah, for example, is 10th in the FBS with a TRACR of 13.4. If the Utes and Roadrunners played each other at a neutral site, the most likely outcome would be Utah winning by about 13 points.

Below is the model’s first top 25, along with projected win-loss records. The rankings will also be updated throughout the season in our FBS Stats Zone.

The SEC will once again be the best conference in college football. Of the 14 SEC teams, three are in TRACR’s top five, eight are in the top 25 and 12 are in the top 50 (with the exceptions being South Carolina at 54 and Vanderbilt at 89).

There is a high chance of the conference getting two bids in the college football playoff and for the conference to win the playoff for the fourth year in a row.

Alabama is ranked No. 1 in the AP preseason poll, but TRACR likes Georgia going into the season. The Bulldogs bested Alabama for the national title last year, but the Tide did get the SEC crown. These two will be neck and neck.

If these teams played at a neutral site, TRACR would have Georgia as only slight favorites, winning by about a field goal.

Georgia’s schedule is quite easy this year. A neutral-site game against Oregon (19th in TRACR) might be its toughest meeting, as it avoids Alabama, Texas A&M (No. 4), LSU (14th) and Ole Miss (15th). A road trip to Kentucky (28th) might be the only thing to set them back.

Georgia has a 92.4% chance to win its division, a 57.6% chance to win the conference title and a 40.0% chance to win out heading into bowl season. All three are the highest percentages for any team in the FBS. The combination of their easy schedule and projected talent has the Bulldogs as a big favorite for a playoff spot.

The Crimson Tide still has all the talent in the world to jump ahead of Georgia yet again. Bryce Young will be a Heisman favorite yet again – only one player has ever won the Heisman twice (Ohio State’s Archie Griffin). On the other side, Will Anderson Jr. is arguably the best defensive player in the country and could be the top overall pick in the 2023 NFL Draft.

Alabama could finish as a top 10 team on both offense and defense this year.

If anybody can dethrone Georgia or Alabama for the SEC title, it’s Texas A&M. The Aggies were tremendous defensively last year, holding opponents to 15.9 points per game. That was third lowest in the FBS, behind only Georgia (10.2) and Clemson (14.8).

They also come in with the best recruiting class with eight five-star recruits and 20 four-star players. The only issue might be at quarterback – Zach Calzada transferred to Auburn, leaving Haynes King with the job. King, a junior, has thrown 39 passes in his career with three touchdowns and four interceptions.

Ohio State Looks for a Title

After years of frustration in The Game, Michigan (No. 9) finally took the Big Ten from Ohio State (No. 3) en route to its first playoff appearance. Though the stars aligned for the Wolverines last year, TRACR finds it unlikely that any Big Ten team will pass the Buckeyes this year.

Ohio State lost first-round receivers Garrett Wilson and Chris Olave while returning C.J. Stroud at the helm with Jaxon Smith-Njigba as the No. 1 route runner. The Stroud to Smith-Njigba combination will likely be the best in the FBS, and both are favorites for Big Ten Player of the Year and the Heisman.

The Buckeyes also return TreVeyon Henderson, who ran for 1,248 yards last year. Nearly everybody in the starting lineup on offense is a future NFL player. They could put up cartoonish numbers. Their 14.4 offensive TRACR ranks first.

The defense was the issue last season, but the Buckeyes still held opponents to 22.8 points per game. That was the fifth lowest in a season in school history. They ranked 34th in sacks last season after finishing 49th in sacks in 2020. That can improve with veterans like Tyler Friday, who missed last season with a torn ACL. Any issues that were faced on defense last season seem to have a solution this season.

The Big Ten West might be a mess. TRACR has Wisconsin (13th) as the favorite with a 29.0% chance to make it back to Indianapolis. The Badgers have plenty of questions, though. Can Graham Mertz finally live up to standards? Will the defense still be dominant after losing eight starters?

Braelon Allen had a tremendous freshman season with 1,268 rushing yards and 12 TDs. Can he continue that and be another Jonathan Taylor, Melvin Gordon, or Ron Dayne?

Though the Badgers are favorites to win the division, TRACR expects them to go either 9-3 or 8-4 in the regular season. There’s a strong chance that the team coming out of the Big Ten West will enter with three losses.

This is Ohio State’s year, with a possibility of finishing the season as national champions.

Clemson Back on Track

Clemson (No. 6) seemed to have an “off year” in 2021 after beginning the season 4-3, but it closed the year on a six-game winning streak to secure the program’s 11th-straight 10-win campaign.

The defense was the reason – the Tigers were second in the FBS in scoring defense, seventh in both opponent pass yards per attempt and opponent rush yards per attempt. Not much was lost in the offseason, so the defense is primed to be even better in 2022.

TRACR projects Clemson to be the second-best defensive team in the nation behind only Georgia.

The offense might still need to prove itself. DJ Uiagalelei showed what he was capable of back in 2020 against Notre Dame, but his 6.01 yards per attempt last season ranked last in the ACC among qualified quarterbacks.

If he does not work out, the Tigers have five-star freshman Cade Klubnik on the sideline waiting for the call. This gives them a second option that they did not have last season. On the ground, Clemson returns top running backs in Will Shipley and Kobe Pace, but some preseason injuries may give room for Phil Mafah. Just like the quarterback situation, the running game has options.

It will not be an easy road – the ACC is getting better. A September game at Wake Forest (35th) could spell trouble. Another road game against Florida State (36th) smells like an upset. If the Tigers survive those games, then it could be an epic showdown when they go on the road to face Notre Dame (No. 7) in November.