Morocco vs Portugal Prediction and Preview | The Analyst 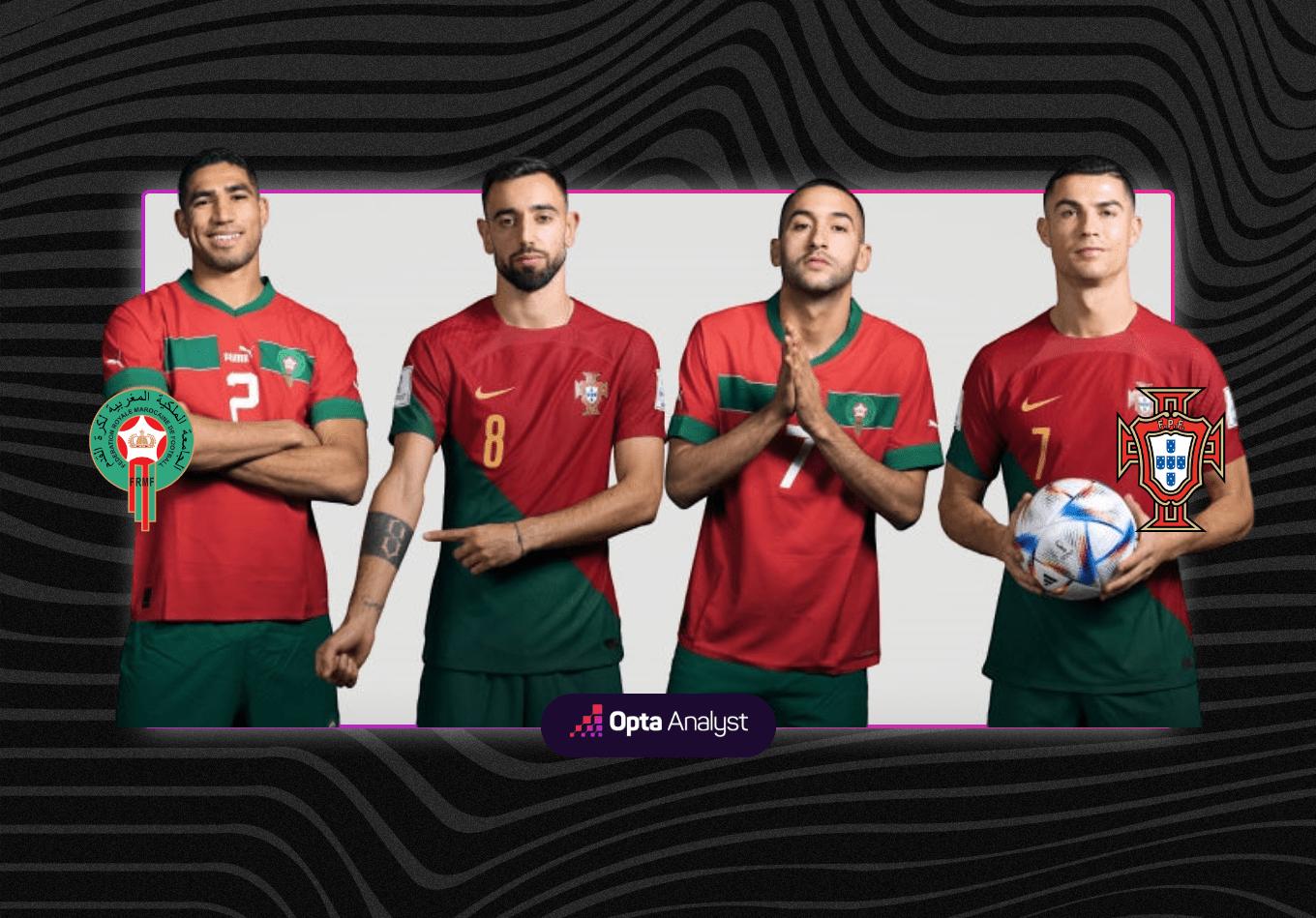 After defeating Spain on penalties in the last 16, Morocco face Portugal in the quarter-finals at Qatar 2022. We preview the game ahead of kick-off at the Al Thumama Stadium in Doha on Saturday, with added insight from our supercomputer model.

Bruno Fernandes and Portugal are alert to the threat of an upset posed by Morocco in their World Cup quarter-final after the Atlas Lions stunned Spain and now eye tournament history.

Walid Regragui’s side held La Roja to a 0-0 draw before beating them 3-0 on penalties, owing much to the saves of goalkeeper Yassine Bounou.

Portugal had been effective if unspectacular in the group stage, but they released the handbrake in the last 16, demolishing Switzerland 6-1 in one of the finest performances by any team at Qatar 2022 after Goncalo Ramos came in for the benched Cristiano Ronaldo and scored a hat-trick.

With the out-of-form and maligned Ronaldo out of the team, there was a perception of Portugal suddenly realising their potential without the 37-year-old holding them back, and Ramos’ performance – as he became the first player since 2002 to net a World Cup treble on his first start – was evidence of that.

But Fernandes – involved in more goals (five) than any of his team-mates in this tournament – insists Portugal will not be taking anything for granted.

Make four predictions on Morocco vs Portugal to win $500

“It’s a difficult game,” he told reporters. “Morocco are a really good team.

“They came first in the group, beat Spain, so we are aware of their qualities. We want to do the best game, as always, but we have to focus on ourselves and understand what we need to do to win our game.

“That’s the most important thing: that we do our game, do our job to get through. We know it will be a really difficult game.”

That is backed up by the fact Morocco have kept three clean sheets in four games at this World Cup, which is the most ever by an African side in a single edition of the tournament.

But the task facing Morocco is monumental.

If they do see off Portugal, Morocco will become the first African nation to reach the semi-finals of a World Cup.

Each of the previous three African teams to reach a quarter-final were all eliminated in the last eight, with Cameroon (1990), Senegal (2002) and Ghana (2010) falling at this hurdle.

Additionally, only two of the previous 11 knockout meetings between European and African teams at the World Cup have seen CAF sides progress, and one of those was Morocco’s shoot-out win over Spain.

Morocco have been one of the best-supported nations in Qatar, and Regragui is calling on the support of the rest of the Arab world to help bridge the gap in quality to Portugal.

“We cannot achieve anything without the Moroccan public,” he said. “Four days ago, they came to the hotel to ask for tickets, and many of them came from all over to encourage us.

“We tell our supporters that we need them, especially in the quarter-finals, to write history. We also need Arab supporters; Algerians, Tunisians and Africans, and we know that many countries are behind us.”

He was the Atlas Lions’ hero in the last 16, saving two penalties in the shoot-out – the other hit the post, but he seemed to have it covered anyway.

But even outside of penalty shoot-outs, Bounou is a key man for Morocco as a dependable goalkeeper who was even nominated for FIFA’s Yashin Trophy – the prize given to the world’s best keeper – earlier this year.

Will Fernando Santos stick to his guns and keep Ronaldo on the bench? Judging by the team’s performance against Switzerland, he should.

Ramos had a hand in four goals against the Swiss and his hat-trick in 74 minutes was more knockout goals than Ronaldo has ever managed in the knockout stages of the World Cup (none in 531 minutes).

With 3 goals and 1 assist, Gonçalo Ramos is the first person to register 4+ goal involvements in a single WC game since Oleg Salenko (6 vs. Cameroon in 1994).

We highly doubt that will be the case for Gonçalo Ramos #FIFAWorldCup pic.twitter.com/wy6WpAusnu

Portugal are firm favourites here, with Santos’ side having a 55.8% chance of progressing to the semi-finals in the 90 minutes.

Morocco have an 18.8% likelihood of winning in normal time, with the draw and extra time, possibly followed by the dreaded penalty shootout is rated at 25.4%.

Clearly then, while the Atlas Lions are the underdogs, they have a good opportunity of at least forcing extra-time, which did not work out too badly for them last time.