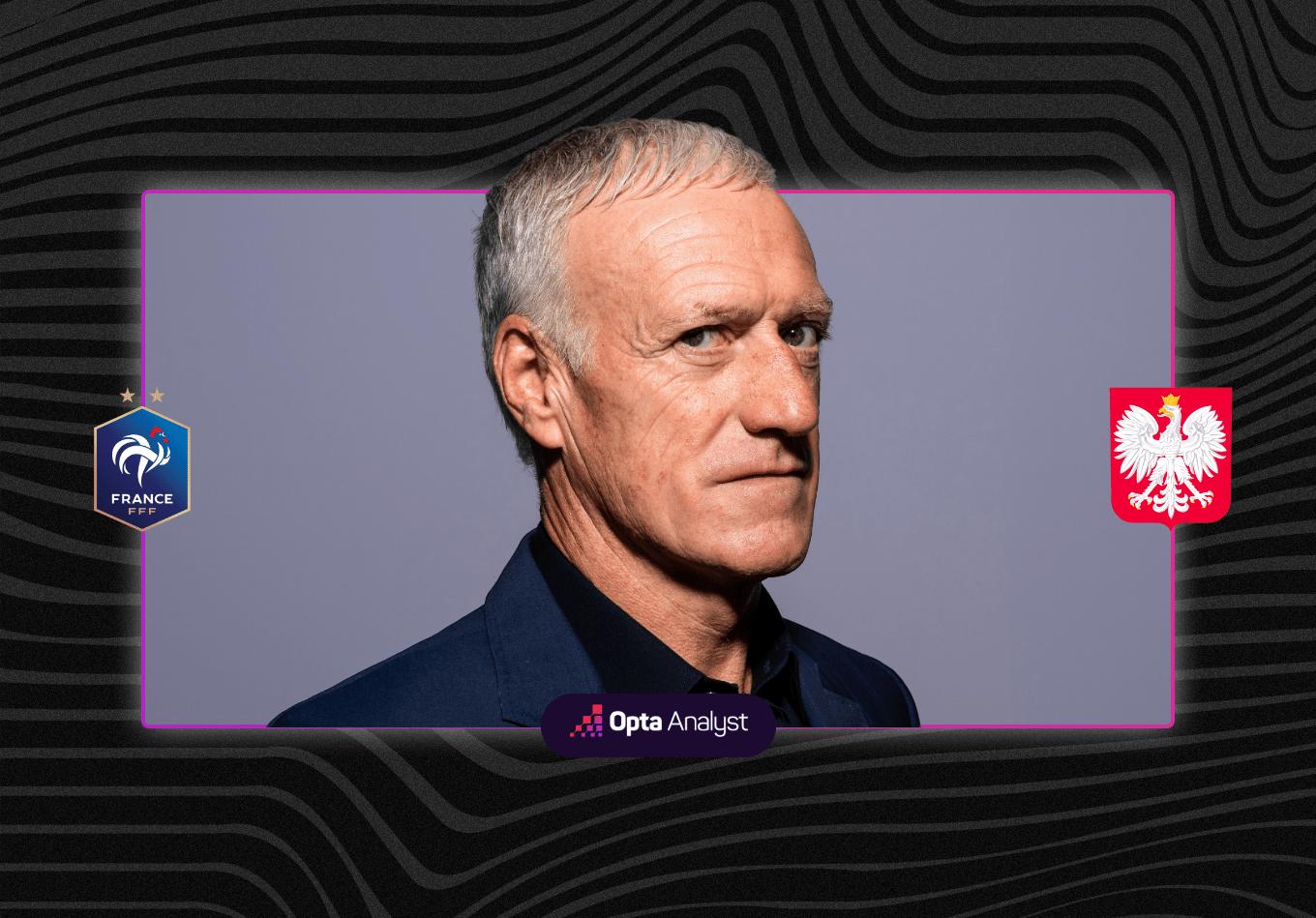 After winning Group D, France face Group C runners-up Poland in the round of 16 at Qatar 2022. We preview the knockout stage World Cup match ahead of kick-off at the Al Thumama Stadium, Doha on Sunday.

Didier Deschamps warned France must not underestimate Poland when they meet in the World Cup round of 16 on Sunday.

Les Bleus have won all five last-16 matches since the stage was introduced to the tournament back in 1986.

The holders are strong favourites to knock the Eagles out at Al Thumama Stadium this weekend in what will be the underdogs’ first World Cup knockout game for 36 years.

France are unbeaten in their past seven meetings with Poland, but Deschamps says there can be no complacency from his side in Doha.

“It’s not a team we’re used to meeting,” he told FFF TV. “They have experienced players. Obviously, if there is one name to stand out, it’s [Robert] Lewandowski, he’s one of the best strikers in the world.

“But it’s not just him, it’s a team that has good organisation, a good athletic presence. We have three observers here who are following them closely, we will have all the details. Don’t underestimate this team.”

Deschamps rung the changes for France’s final Group D match on Wednesday, which they surprisingly lost 1-0 to Tunisia.

Kylian Mbappé, Olivier Giroud, Hugo Lloris, Ousmane Dembélé and Antoine Griezmann were among the players who dropped to the bench for that loss.

Poland will need to find a way of containing Mbappé, the joint-leading scorer in the tournament with three goals, while Giroud is one shy of becoming his country’s all-time leading goalscorer as he currently stands level with Thierry Henry on 51.

The Polish were beaten 2-0 by Argentina in their last Group C game on Wednesday but took second place after a draw against Mexico and a victory over Saudi Arabia. Poland finished level on four points in the Group C standings, but a late Saudi Arabia goal in their game versus the Mexicans sent Poland through with a better goal difference.

A quarter-final showdown with England or Senegal will be the reward for whoever comes out on top.

Griezmann continues to deliver for France time and time again. No player has created more chances than the 11 he has produced for Les Blues in this tournament, and his 2.34 expected assist mark is easily the best in Qatar with the majority of that coming from open play:

The Atlético Madrid forward is the only player to create at least 10 chances in both this World Cup and Russia 2018 for France.

Goalkeeper Szczęsny has played a key role for Poland in Qatar, achieving a save percentage of 90. He had kept out each of his first 16 shots on target faced in the tournament prior to Alexis Mac Allister’s goal for Argentina.

Szczesny saved a Lionel Messi penalty in midweek, ensuring he has stopped a spot-kick in each of his past two World Cup games. Unsurprisingly, his goals prevented mark leads the tournament heading into Friday’s final group-stage matches:

He could be in for a busy game, given France’s quality going forward.

While there have been shock results aplenty in this tournament, France will not be expected to slip up when they attempt to seal a place in the last eight.

Our model gives the defending champions a 74.8% chance of going through, with Poland at only 8.1% to produce an upset. That leaves a 17.1% chance for penalties.