France vs Morocco Prediction and Preview | The Analyst 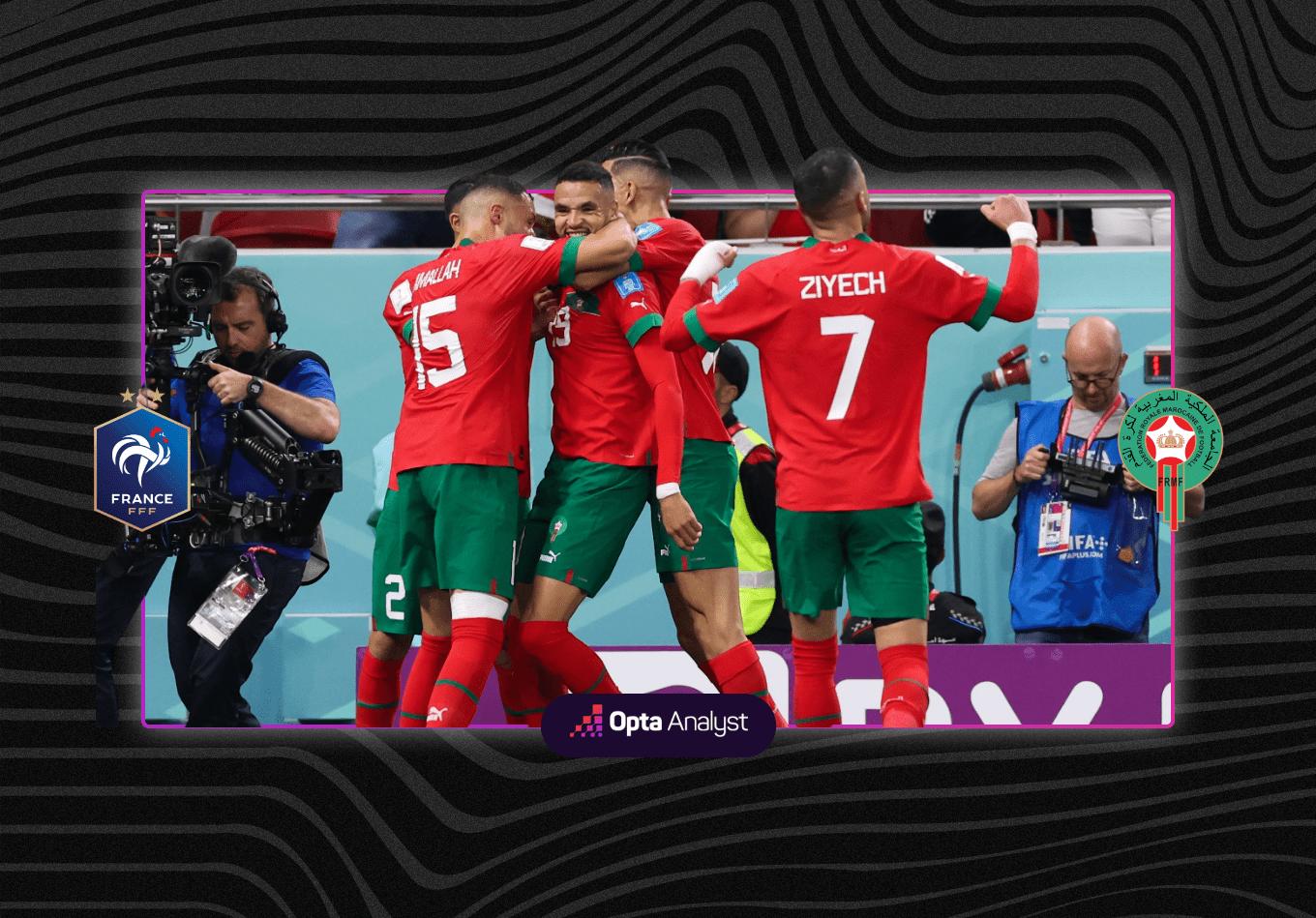 Morocco have become the first ever African nation to reach a FIFA World Cup semi-final following their victory against Portugal. They come up against reigning world champions France in this final four match at the Al Bayt Stadium in Al Khor, Qatar.

France’s build-up to the World Cup was dominated by talk of the so-called “holders’ curse” and Didier Deschamps’ uncertain future.

A few weeks later Les Bleus are on the verge of becoming the first reigning champions to reach the World Cup final since Brazil in 1998 – you have to go back a further 50 years to the last time a European nation achieved such a feat when Italy did so in 1938.

Deschamps’ preparations were not helped by injuries to important players, but France’s ruthlessness going forward has inspired another deep run into the tournament after seeing off England in the quarter-finals despite arguably being second best.

Goals from Aurélien Tchouaméni and Olivier Giroud saw France beat the Three Lions 2-1, but it could have been much different had Harry Kane’s late penalty not sailed over Hugo Lloris’ bar.

It will be the defending champions’ seventh World Cup semi-final. After losing their first three, each one they have contested since – in 1998, 2006 and 2018 – has ended in French celebrations.

Given the previous three holders before France crashed out in the group stage (Italy in 2010, Spain in 2014 and Germany in 2018), Deschamps is pleased to have avoided humiliation – but they still have ambitions to satisfy.

“We’ve got to the semis, closer to the final, and this was an important achievement, so we can believe in ourselves, but we have a big game on Wednesday,” he said.

“We can be satisfied with what we’ve done so far, even though we want to go further. In the past, the world champions haven’t always done well in World Cups and we’ve overcome that challenge, but we have an important game on Wednesday.”

Make four predictions on France vs Morocco to win $500

While France have the weight of big expectations on their shoulders, Morocco will be fearless after seeing off both Spain and Portugal with two clean sheets en route to becoming Africa’s first World Cup semi-finalists.

Deschamps is wary of the threat posed by the Atlas Lions.

“It’s fantastic what [coach Walid Regragui] has achieved,” he added. “Morocco have played and beaten some of the best teams in the world, and that’s down to the players, the coach, the staff.

“It’s a historic achievement. It’s not a surprise now because we’ve seen them put in a number of top performances. They haven’t stolen the victories; they’ve deserved them.”

Regragui has been lauded for Morocco’s run, partly because his leadership qualities are underpinned by an articulate and wise demeanour.

Under his guidance, Morocco have extended their World Cup unbeaten run to six matches, a record for an African nation.

Throughout the tournament, Regragui has spoken of his desire to unite the Arab world; now he is relishing Morocco’s chance to represent Africa.

“We advanced with our qualities. We lost a lot of players before the World Cup. We lost Amine [Harit], [Imran] Louza, [Adam] Masina… but we held on,” he said.

“We created a state of mind. You have to fight for these people, to make them happy.

“Today, Africa has returned to centre stage. Each time, [African teams] were asked: ‘when are you going to pass the [quarter-final] stage?’ It’s done.

Youssef En-Nesyri’s fantastic header against the Portuguese saw Morocco reach this stage, with the Sevilla striker one of many Moroccan players with tonnes of experience within the major European club leagues, alongside stars like Hakim Ziyech, Achraf Hakimi and Sofiane Boufal.

With Kylian Mbappe and Giroud hogging most of the headlines for France, Griezmann has made a big impact and Morocco must find a way of keeping him quiet.

The Atletico Madrid man has performed a vital playmaking role for Les Bleus and set up both goals in their quarter-final win over England, taking his goal-involvement tally to eight in his past eight World Cup starts.

Overall at the 2022 FIFA World Cup, the French star has the highest expected assists total (2.94) and has created a tournament-high 17 chances for team-mates.

Once again, Morocco are unlikely to have most of the ball, so the combativeness of players like Azzedine Ounahi and Amrabat in midfield could be key, particularly with Griezmann so influential in his new midfield position.

Ounahi probably trumps Amrabat in the elegance stakes, but the latter’s eight successful tackles is the fourth-highest among midfielders at the World Cup, while his tournament-leading 41 recoveries demonstrates the Fiorentina star’s fine understanding of how to read the game. He’s a big asset.

It won’t come as a huge shock to learn Les Bleus are the clear favourites with the Opta match prediction model ahead of kick-off.

Deschamps’ men have a 64.3% chance of winning this world cup match in normal time, the supercomputer reckons.

Morocco, of course, already defied the odds to get this far, though their 13% likelihood of victory is reduction from 18.8 per cent ahead of the Portugal game.

The draw and extra time is rated at 22.7%, and the Atlas Lions would presumably take that in a heartbeat.

Of course, there is another tie to be played in the semi-final round of the 2022 FIFA World Cup. You can play our Opta Challenge game for a chance to win $500. Click on the links below to play (t&cs apply).