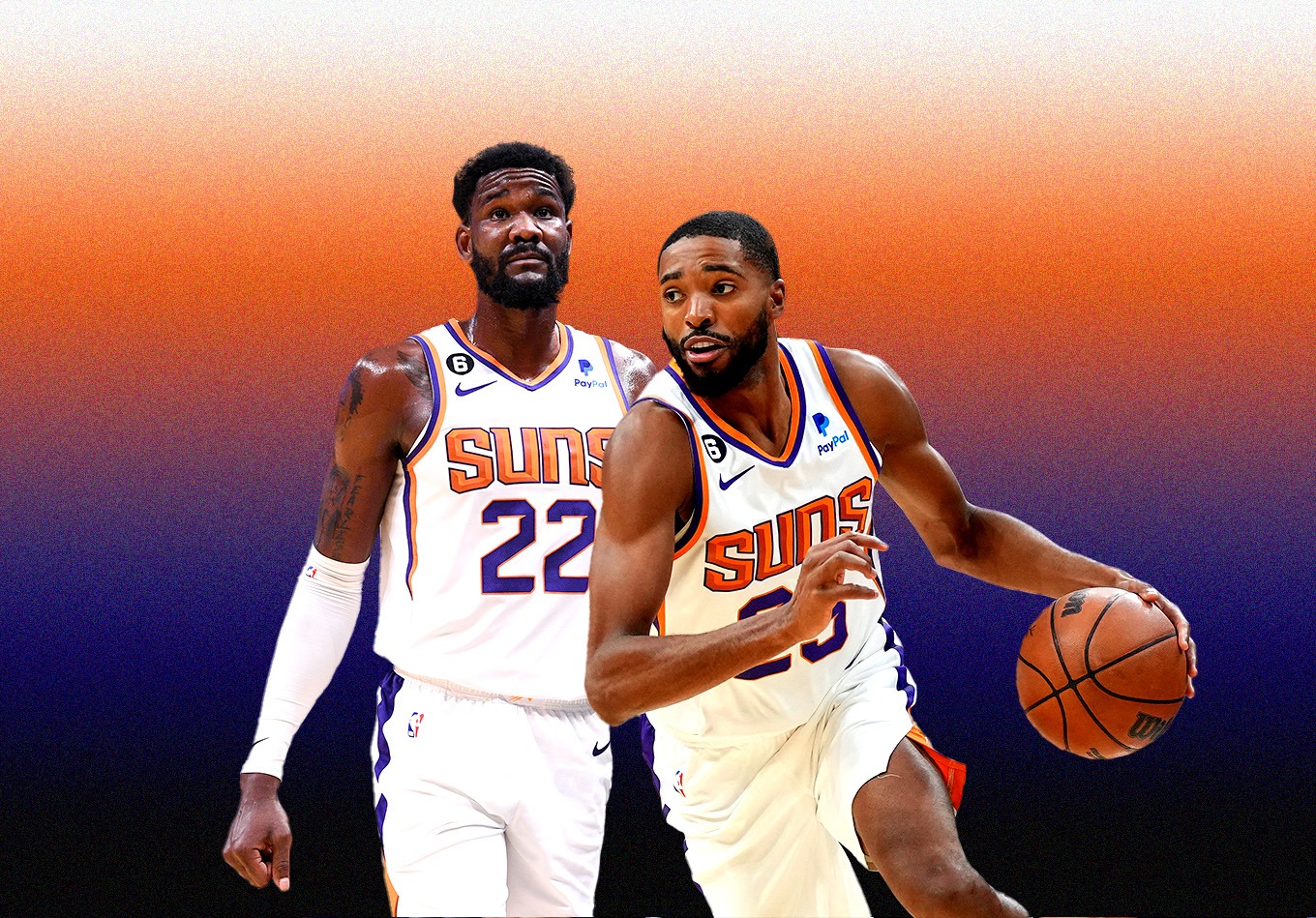 Last week, in our quarterly check-up on contenders, the Phoenix Suns emerged as one of the teams with statistical indicators befitting of a conference finals team.

This seems peculiar when you account for two variables. One, future Hall-of-Famer Chris Paul and emerging youngster Cam Johnson have missed a combined 33 games this year (and counting in Johnson’s case).

And two, the team already seemed like a likely candidate for regression after having its flaws magnified against the Dallas Mavericks (more on this a bit) and doing little to improve those areas last offseason.

But yet, here we are with the Suns sitting at 16-11 and touting the seventh-best adjusted team rating (ATR) in the association.

Their ability to remain potent through adversity has a great deal to do with the tantalizing young duo of Deandre Ayton and Mikal Bridges.

Their development has not only been paramount to achieving their current success, but is also essential to their chances at a deep playoff run this spring.

Finishing at Every Angle

Here are some nuggets: Phoenix has the second-best offense in the league based on our adjusted offensive rating (AOR) metric. The Suns have managed this despite injuries and a slow start from Cameron Payne (whose true shooting percentage is minus-6.2 points below league average).

With this in mind, the Suns have the sixth-lowest turnover percentage (TOV%), which signifies the fluidity with which they run their offensive actions. However, no matter how well you run these sets, you need players who can capitalize on the advantages they create (i.e., finish the plays), and Phoenix has just that in Ayton and Bridges.

On the interior, Ayton uses his vacuum hands, pristine footwork, and gentle touch in a way that induces Suns fans to recall their fond memories of Amar’e Stoudemire.

These attributes make him a commendable roller, lob threat, release valve to drivers, pick and pop artist (typically in the short midrange), and a menace on the offensive glass.

Many of the clips above feature Ayton as the punctuating force in pick and roll, only furthering the notion of his similarities to Stoudemire.

Over the years, Ayton has morphed himself into the quintessential pick-and-roll partner, which enhances his value on this Suns team that has three ball handlers who relish operating in pick-and-roll. According to NBA.com play-type data, Devin Booker, Payne, and Paul all average over 5.5 pick-and-roll ball-handler possessions per game. This means that having a suitable ball-screen playmate is an integral part of this offense’s success.

As for his counterpart Bridges, he’s a master of off-ball movement. Not in the sense that he’s a jitterbug running aimlessly around the court (although he definitely has the motor to do it if he pleased). No, his technique is far more refined than that.

He has a great understanding of time and space. He knows when to drift down from the wing to the corner to make himself more available for a potential kickout, when to backdoor cut an assuming defender on the baseline, and when to slip a screen to sneak in for a layup.

His knack for sensing scoring opportunities without the basketball has led to him averaging more points (15.8) and field goal attempts per game (12.3) than he has in his entire career.

This has been a major revelation for a Phoenix team that has largely been bereft of high-end on-ball creation outside of Booker and needs someone who can find high-percentage shots in the half court.

What Happened Against Dallas

After falling behind 0-2, the Mavericks stormed back to take four of the next five and upset the No. 1-seeded Suns en route to a Western Conference finals berth.

And while many factors deserve credit for the Mavericks’ turnaround, arguably chief among them was their decision to blitz and pressure the Suns All-Star backcourt tandem. By doing this, Dallas forced the ball out of the hands of Phoenix’s superstars and placed the onus of creating offense on the supporting cast.

Normally, when a team blitzes the ball handler, they are putting themselves at a temporary 4-on-3 disadvantage. But the Suns could not make Dallas pay for their transgressions because no one outside of Paul and Booker was capable of manufacturing their own offense.

Here is a perfect example of what we’re talking about:

Dallas blitzes Booker in pick-and-roll, which puts their defense in scramble mode, leaving the slow-footed Dwight Powell on the quicker Bridges and the equally lethargic Davis Bertans protecting the paint.

Unfortunately for Phoenix, Bridges was ill-equipped to exploit this advantage. And the possession ended in a contested fallaway jumper (which would be a good possession… if it was Michael Jordan shooting the jumper).

Learning From the Experience

To avoid these same issues rearing their ugly heads this postseason, the Suns have made it a point to give Ayton and Bridges more on-ball duties this season.

This trend can be understood when you compare the increase in their percentage of unassisted 2-pointers (an indicator of a higher creation burden) from this season to last season.

For Ayton, his increased offensive load comes by way of post-ups. His 3.9 post-up possessions per game currently put him 94th percentile in post-up volume.

Once viewed as outdated, the post-up has started to come back in vogue as the play type can still be efficient when it is executed quickly, with deep post position, and with the intention of attacking mismatches on the interior.

In the playoffs, when the defense is in scramble mode after blitzing the Suns’ guards, there will be times when the chaos leads to Ayton being matched up against a smaller opponent. Using these quick post-ups give him an avenue for making the defense pay for overreacting.

And if he can poke this hole enough, he starts to become more of a focal point in the defense’s game plan, giving his star guards more room to maneuver.

As for Bridges, his growth is about being able to convert on opportunities like the clip we highlighted in the last section. He needs to be the third guy (after Paul and Booker) who can attack defenses as the ball handler in pick-and-roll sequences.

It needs to be him and not someone like Payne because Payne is too frail to hold up on defense in a playoff setting. Meanwhile, Bridges is one of the best perimeter defenders in the league, so getting him to provide on-ball offensive value on top of that would be a massive plus for the Suns in any given matchup.

He’s shown great aptitude in this role up to this point (here’s a nice example), placing in the 98th percentile in pick-and-roll ball-handling efficiency (albeit on a little under one possession per game).

In a stacked Western Conference, the team that comes out on top will need its ancillary guys to produce when its stars get slowed down. For Phoenix, those players that need to rise to the occasion are Ayton and Bridges. That’s a lot to put on the two young players’ plates, but so far, they have proven to be up to the challenge.