The Viz: The Chicago Bears vs. Green Bay Packers Through Time | The Analyst 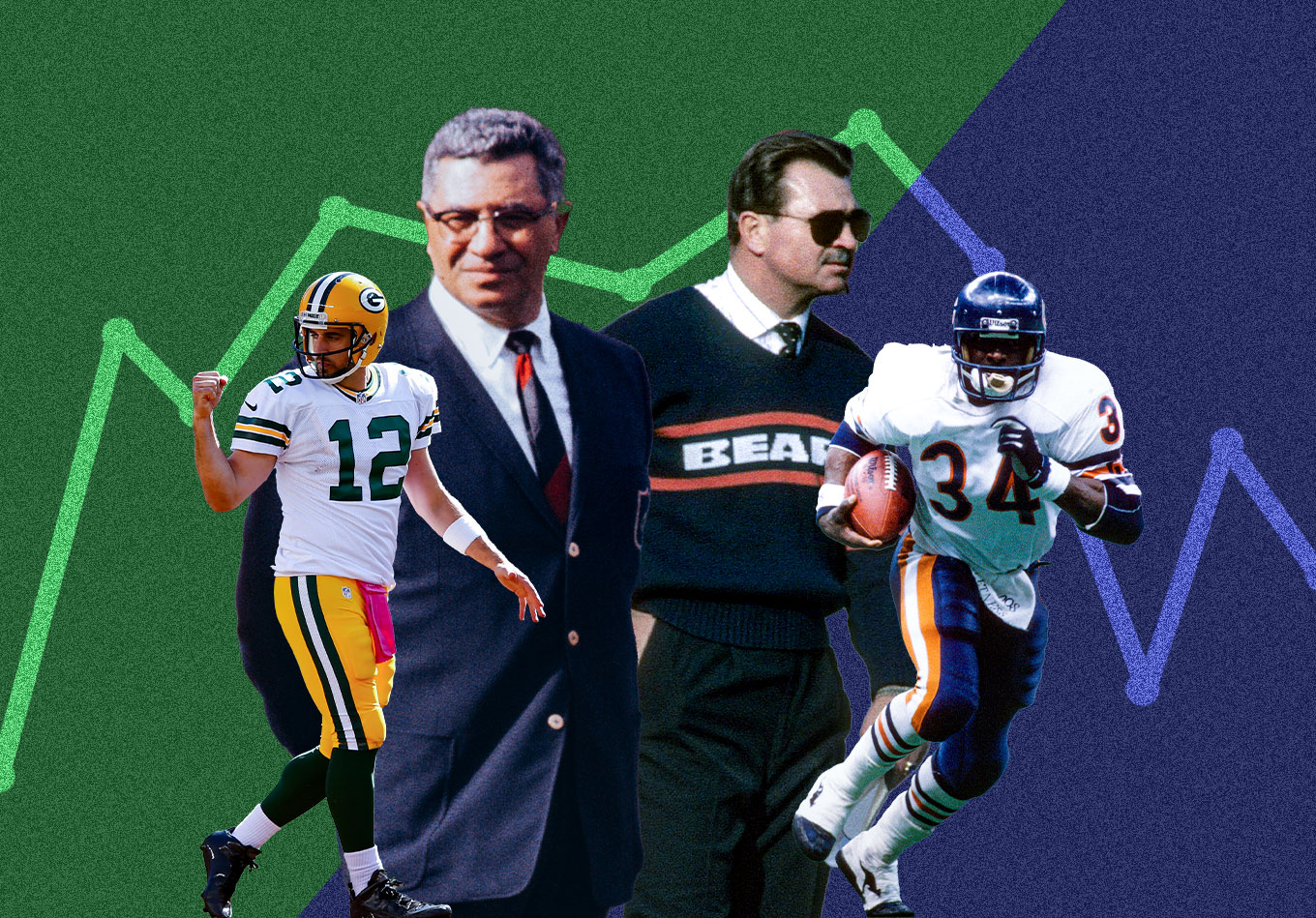 One of the most celebrated rivalries in American sports history has turned 101 years old this season. Telling the story comprehensively would take volumes, so we took a crack at showing it with fewer words and more data viz ahead of another meeting in this historic rivalry.

Isn’t that how every great sports rivalry is? This was what Chicago Bears head coach Mike Ditka told the Chicago Tribune about the Green Bay Packers, but it could have been uttered by any player or coach over the last century.

The best sports rivalries have a lot of history, which serves as baggage every time the two teams play each other. And 100 years is a long time to accumulate baggage.

There has been dominance both ways, a host of legendary quarterbacks vs. a slew of legendary defenders, an on-field knockout punch, a potential dynasty-shattering late hit, the running up of the score out of pure spite, the coldest game in Bears history, and a quarterback who once claimed ownership of the other franchise.

We’ve taken “The Viz,” a series that lets data visualizations and tables do much of the talking, over to the National Football League. After exploring the Dallas Cowboys-Washington Commanders rivalry in September, we’re continuing with the two franchises that have the most wins in NFL history.

It may be surprising to some, given the recent dominance of the Packers over the Bears, but the all-time record between the two franchises is close, with the Packers maintaining a 102-94 advantage heading into the 2022 season series.

Break down the stats, though, and the Packers do have the edge in most categories.

Note that there were six ties as well between the two teams, with four of those ties occurring in Green Bay.

The rivalry started off evenly between the teams, with the Bears owning a slight 19-17 advantage from 1921-39. The two decades were highlighted by a game in 1936 in which a Packers fan ran onto the field and punched Bears player Ted Rosequist, knocking him out of the game.

Then came two decades of Bears dominance, with Chicago winning 29 of 38 games from 1940-59. The highest-scoring game of the series came in 1955 when the Bears beat the Packers 52-31 despite 28 points in the fourth quarter from Green Bay.

The 1960s belonged to the Packers, as Green Bay won 15 of 20 matchups, but the Bears bested their rivals in both the 1970s and 1980s. The bad blood was taken to a new level in 1980, when the Bears beat the Packers 61-7 on Dec. 7. The Packers were furious that the Bears ran up the score and kept blitzing in the fourth quarter, and the Bears didn’t show any remorse, with Dan Hampton saying the team wanted to score 100 points.

In 1985, the legend of “The Fridge” was born, as defensive end/giant running back William “The Refrigerator” Perry took a handoff and plunged into the end zone for a touchdown en route to a 23-7 Bears win at Solder Field.

The following year, the Bears’ quest for a repeat title was shattered against Green Bay, when Packers defensive tackle Charles Martin slammed Jim McMahon to the ground after an interception, separating McMahon’s shoulder and sidelining him for the rest of the season. The Bears weren’t able to win another Super Bowl that year and haven’t done so since.

The Bears’ dominance in the rivalry came to an end after the 1980 season, as anyone following the teams recently would know. The Packers have won every decade since the 1990s and have managed to overtake the Bears in the all-time matchup with the recent lopsided decades.

Hall-of-Fame quarterback Brett Favre, the biggest reason for the Packers’ success in the 1990s, had several highlights during the decade, but perhaps none more memorable than when he rushed for a 36-yard touchdown to help blow out the Bears 33-6 on Oct. 31, 1994.

Favre was still slinging it in the 2000s, and he threw an 85-yard touchdown pass to Donald Driver to help the Packers roll to a 34-21 win on Monday Night Football in 2002. Quarterback Aaron Rodgers introduced himself to the Bears on Nov. 16, 2008, with a resounding 37-3 victory. However, the Bears would have their revenge later in the season in what was the coldest game in Bears history. With a wind chill of minus-13 at game time, Robbie Gould kicked a field goal in overtime to give the Bears a 20-17 victory.

Since then, Rodgers hasn’t lost much to the Bears. Needing a win in the last game to get into the playoffs in 2011, the Packers pulled off a 10-3 win, with Rodgers throwing for the only touchdown of the game with 2:50 remaining. Entering the 2022 season, Rodgers has gone 23-5 in the Bears-Packers rivalry (including the playoffs) while throwing 61 touchdowns – his most versus any opponent – and just 12 interceptions.

The Bears, though, would get a rare win against Rodgers to clinch the NFC North title in 2018. Eddie Jackson ended Rodgers’ record streak of 402 passes without an interception with a late pick to essentially seal the 24-17 win.

And the most recent Packers highlight and Bears lowlight in the series came on Oct. 17, 2021, when Rodgers ran for the game-sealing touchdown in a 24-14 win and taunted the crowd by screaming: “I still own you!”

The biggest difference that has helped the Packers dominate the last three decades? The quarterbacks.

Since 1993, the Packers have started a grand total of two quarterbacks in their season openers: Favre and Rodgers. Meanwhile, the Bears started 14 different QBs over that span heading into the 2022 season. They can only hope that Justin Fields gives them the stability the Packers have had at the position for a long time.

The Packers and Bears each have one of the most legendary NFL coaches of all time in Vince Lombardi and George Halas, respectively, but neither leads their franchise in winning percentage since 1921.

For the Packers, that honor belongs to current head coach Matt LaFleur, who has the best winning percentage of any coach in NFL history with at least 40 games coached entering the 2022 season. Lombardi is second on that list, and he also has the second-most wins for the franchise.

Third in wins and percentage is Mike Holmgren, who presided over a successful reign for most of the 1990s.

Fourth on the list in winning percentage is the founder of the Packers. Curly Lambeau has the most wins of any Packers coach and is the namesake of Lambeau Field, which changed its name from New City Stadium following Lambeau’s death in 1965. Rounding out the top five for the Packers in winning percentage is Mike McCarthy, who won 125 games with the franchise and a Super Bowl in 2011.

The Bears’ top coach in terms of winning percentage was Ralph Jones, who took the reigns for three seasons when George Halas stepped away from coaching in 1930. Halas, of course, came back to coaching, and he has the most wins and second-best winning percentage of any coach in Bears history. He has the second-most coaching wins in NFL history.

After Halas comes two more Halas proteges in Hunk Anderson and Luke Johnsos, who amassed a 23-11-2 record as co-coaches for three seasons. The two were forced to coach when Halas joined the Marines for World War II.

Finally, fifth in winning percentage is the man simply known as “Da Coach” in Chicago. Mike Ditka was obviously a beloved figure during his tenure with the Bears and is the only coach to lead them to a Super Bowl win.

The playoffs have been a separator between the two franchises, as the Packers have had plenty of success while the Bears have not.

The Packers trail the New England Patriots by one game for the most playoff wins since 1932 and are tied with the Pittsburgh Steelers with 36.

Green Bay’s last Super Bowl appearance was following the 2010 season, and it was extra rewarding because it came at the hands of the Bears in the NFC championship game.

The Bears were the top seed in the NFC, but the Packers came in winners of four straight, including the last game of the regular season against Chicago. Rodgers led the Packers on a touchdown drive to start the game, and the Packers never trailed after that. Caleb Hanie, the second reserve quarterback to come in following starter Jay Cutler’s injury, did make it interesting down the stretch, but an interception by Sam Shields with 47 seconds left clinched the 21-14 win for the Packers.

It was only the second playoff matchup ever in the series. The Bears had won the first 33-14 in the 1941 divisional round. It was the first divisional playoff game in NFL history and was necessitated by the two teams having identical 10-1 records. The Bears would go on to win the championship against the New York Giants. It was the third of their six championships while calling Wrigley Field home, which is a reminder that the curse of the Billy Goat only applied to the baseball team there.

Following the Super Bowl win in the 2010 season, the Packers haven’t been back to the Big Game, but have managed seven more playoff wins. The Bears, on the other hand, haven’t had a postseason victory since the week prior to their loss to the Packers in those playoffs and have only made the playoffs twice in that span.

The Packers are tied with the Giants for fifth in Super Bowl wins with four. Half of those wins came from winning the first two Super Bowls in league history. Super Bowl I was a 35-10 victory over the Kansas City Chiefs that saw the Packers pull away in the second half by scoring the last 21 points of the game. In Super Bowl II, the Packers defeated the Oakland Raiders 33-14 as Bart Starr threw for over 200 yards in his second straight Super Bowl.

Despite the decades of excellence from Favre and Rodgers since, each quarterback has only won one Super Bowl.

Brett Favre won his Super Bowl at the end of the 1996 season, throwing for 246 yards and two touchdowns to beat the New England Patriots 35-21. The Packers defense chipped in with four interceptions of Patriots quarterback Drew Bledsoe. And the special teams kicked in when Desmond Howard returned a kickoff 99 yards for a touchdown for the final score of the game, earning him Super Bowl MVP honors.

Green Bay won its most recent Super Bowl in the aforementioned 2010 season, with Rodgers leading the way. The team got off to a fast start against the Pittsburgh Steelers, with Rodgers throwing a touchdown pass to Jordy Nelson and Nick Collins returning an interception of Ben Roethlisberger for a TD in the first quarter. When Rodgers found Greg Jennings for a score in the second quarter, the Packers had a commanding 21-3 lead over the Steelers.

Pittsburgh battled back, with Roethlisberger finding Mike Wallace for a touchdown with 7:40 left to make it 28-25. But Rodgers led the Packers on a drive that took 5:24 off the clock and ended with a Mason Crosby field goal to put the Packers up 31-25. On the ensuing drive, the Steelers turned it over on downs, preserving the Green Bay win.

At halftime, the Bears led 23-3 and the Patriots offense had managed minus-19 total yards. The last score of the game was, fittingly, a safety, as the Bears collapsed on Patriots quarterback Steve Grogan in the end zone.

The Bears have only been back to the Super Bowl once since then – a loss to the Indianapolis Colts in the 2005 season. But who knows what will come next?

If this rivalry has taught us anything, it’s that decades of dominance don’t last forever, and anything can change in the span of a few years. Except for the baggage. That will never go away.