Can Eddie Nketiah Replace Gabriel Jesus for Arsenal? | The Analyst 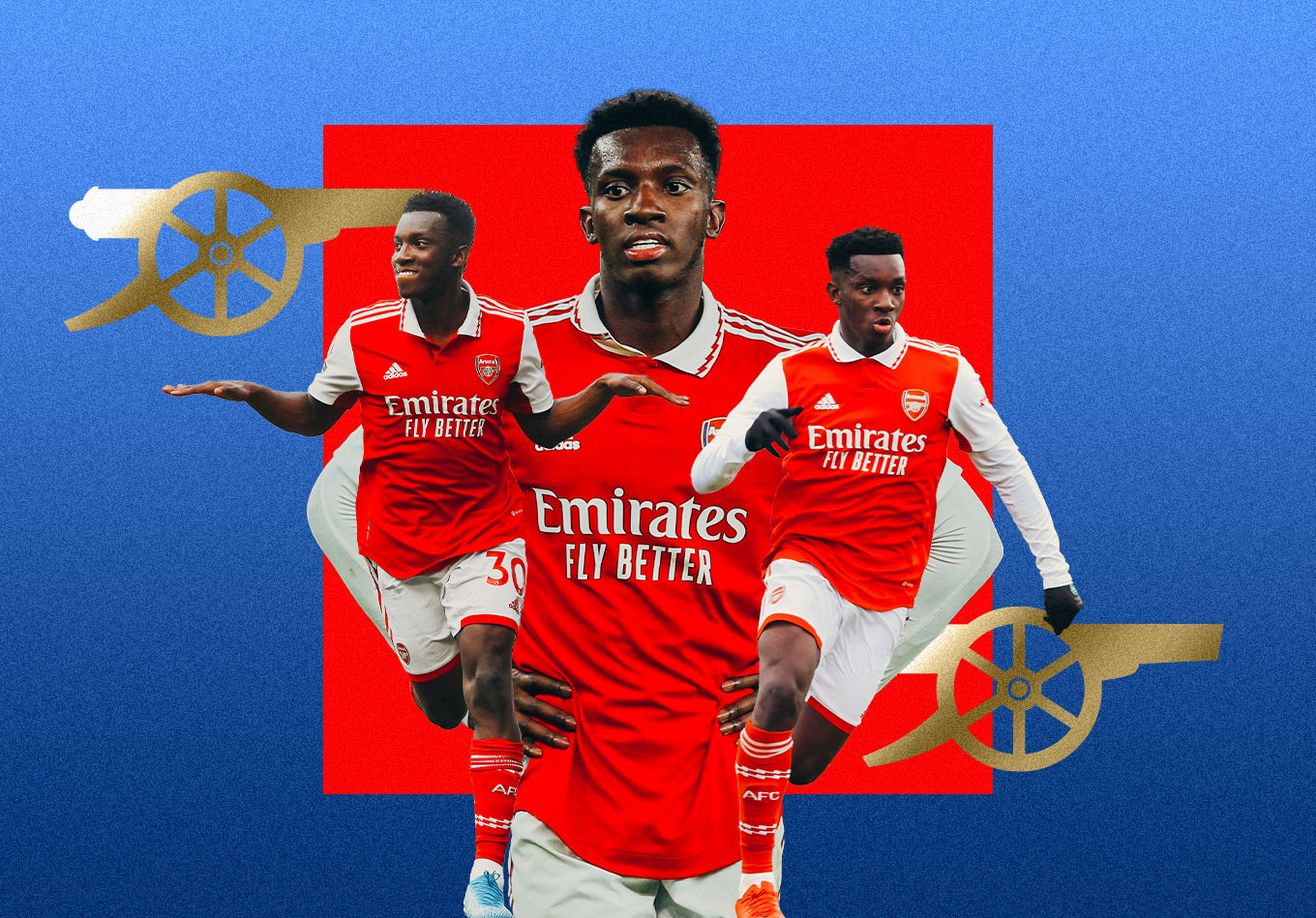 The Premier League returns on Boxing Day with Arsenal not just top of the table but five points clear. We are not yet halfway through the season but it seems Mikel Arteta’s team are the only side with a shot at challenging reigning champions Manchester City this season. They’re certainly the most likely.

But can they still pull it off with Gabriel Jesus now injured? A knee issue picked up at the World Cup has left the Gunners in title race limbo, even if the Brazilian does have just five goals in 14 Premier League appearances since his summer move from the Etihad Stadium. In fact, Jesus left for the World Cup having failed to score in his last six Premier League matches and his last 11 Arsenal appearances (including eight starts) across all competitions. But his all-round play has been so impressive that nobody seemed to really mind and the near-unanimous consensus is that his injury could all but end Arsenal’s slim title hopes.

So far this season, no player in the league has had as many touches in the opposition area with his tally of 141 comfortably clear of the next-highest Mohamed Salah on 118. Additionally, only three players have taken more shots than Jesus, only Erling Haaland has a better xG per shot, just two players have completed more dribbles, only seven players (none from Arsenal) have created more chances from open play, and no Arsenal player has won as many tackles.

Gabriel Jesus is doing just about everything as he leads the line. But to what extent are Arsenal where they are because Jesus has played the way he has, and to what extent has he impressed because of the platform given to him by Mikel Arteta’s system? And can Eddie Nketiah replace him up front well enough to keep Arsenal’s superb start going?

Nketiah actually ended the 2021-22 season as Arsenal’s first-choice striker, replacing Alexandre Lacazette as the team chased a top-four spot, before signing a new deal in the summer. Since then, though, thanks to the arrival and form of Jesus, Nketiah is yet to start a Premier League game this season.

But he is well-suited to replace what Jesus offers Arsenal, even if he may not do so at quite the same level. When Arteta arrived at Arsenal – Boxing Day marks three years since his first match in charge – Nketiah was considered a poacher. A very good one with potential to make it at the top, but a poacher nonetheless, a striker who would not offer much outside the penalty area.

He is the all-time top scorer for England U21s, where his first strike saw him beat defenders out wide before finishing from distance, was an outlier. Nketiah has always played on the shoulder of defenders and popped up in the right place at the right time. His goals almost exclusively come from close range.

Look back beyond 12 months and Nketiah was willing to stretch defences and he had a nose for goals – one every 167 minutes in half a season in the Championship with Leeds and a respectable return in limited minutes for Arsenal too – but he has become so much more under Arteta. He has been moulded into something of a Gabriel Jesus lite but with those poaching instincts still strong.

The biggest weakness in the Brazilian’s game is his ability to finish chances, an issue Nketiah doesn’t share. Rather, he has 10 goals in his last 10 starts at the Emirates Stadium across all competitions.

The question, of course, is what’s the trade-off? The rest of Jesus’ game is superb. If Arsenal gain a better finisher, what do they lose?

While he can’t do the rest as well as Jesus does, Nketiah is now much more than the penalty-box poacher he emerged as. Arsenal will not be replacing their first-choice striker with a player unwilling or unable to do any of the work outside of the penalty area. He may do it with a less quality, or less consistency, but he can play Jesus’ role. He already did it last season, before Jesus even became an Arsenal player.

A willingness to drop deep, link play and to peel wide has been clear in recent friendlies against Lyon, Milan and Juventus, but it isn’t anything new. Nketiah came into the Arsenal team down the home stretch last season and did exactly the same. It was enough to earn him a hefty new contract at the club, plus the iconic No. 14 shirt, and now Arsenal need him to start paying them back.

A glance at the numbers, and some footage from the spring, suggests he is more capable of doing the things Arteta asks of his strikers outside the box. There is some drop-off but there would be with anyone – nobody in the league this season has offered quite everything Jesus has.

As far as replacements go, Nketiah has shown he can handle the expectations, while playing in the same role with the same team-mates last season. Here’s a per-90 comparison of the two:

There’s a drop-off in touches, but perhaps most encouragingly, Nketiah showed his ability to do the non-goalscoring stuff that makes Jesus so great in games against three of the Premier League’s top sides earlier this year.

Against West Ham back in May, Arsenal struggled to get going until Nketiah dropped and offered to feet with his back to goal, as the Gunners were building up in their half. With Arsenal’s Martin Ødegaard and Gabriel Martinelli playing in the channels, there was a huge space between West Ham midfielders Declan Rice and Mark Noble. Nketiah found it repeatedly, and Arsenal, in turn, found him, where he was either free to turn in space or had dragged centre-back Aaron Cresswell out of the backline.

And that wasn’t all that was impressive about Nketiah’s game that day.

Unfortunate not to score, the striker took an impressive four shots, all created by his own running with the ball approaching the penalty area:

The fourth of those shots came from superb reading of play and hard running as Nketiah pounced on a loose pass around the halfway line, just as he had done to score at Chelsea less than two weeks earlier.

Jesus puts in an incredible amount of work defensively, winning more tackles than any other Arsenal player so far this season, but Nketiah has the energy and desire to run too and the nose for a chance when he does press. He won the ball to earn his goals against Chelsea and Leeds last season, just as he did behind closed doors at Southampton in 2020.

And his work from the front helped keep Manchester United pinned back between those Chelsea and West Ham games less than a year ago. Like Jesus does on a weekly basis, Nketiah joined Ødegaard at the front of Arsenal’s press. The Gunners like to force the ball back to the goalkeeper or to the left of the opposition defence, blocking any route through the middle, covering a long switch with Gabriel Martinelli on the left flank, and pushing up with Bukayo Saka and either Ben White or Takehiro Tomiyasu from right-back.

Jesus and Ødegaard are sensational at shutting sides down, blocking the deepest midfielder, charging when teams play square passes to force them further back, force an error, or force a long ball forward. Nketiah, along with his captain, did just that against United last time they visited north London. Depending on which side the ball was on, one would block the ball into midfield, the other would press to force the ball either wide or back.

As it went backward, one would follow it at pace. In this instance, David De Gea has no choice but to play the ball long, and Arsenal won it back.

With a pass into midfield blocked by United wary of going wide, where Alex Telles is isolated against the touchline, the pass goes from one centre-back to the other, where Nketiah leapt into action, and in combination with Ødegaard once again blocked a ball into the middle of the pitch.

When Arsenal were on the ball, Nketiah looked threatening as more of a poacher. One big chance was saved by De Gea, another saw the striker calmly find the bottom corner as the ball fell to him in the box, though that was pulled back for a tight offside.

Arsenal will, of course, miss Jesus. He has been integral to their form so far this season, with some profligacy the only complaint that can be thrown his way. The Brazilian’s energy and ability to win the ball, combined with his ability to hold onto and carry it, makes him the ideal modern striker. And there must be a temptation to see what can be done in the January transfer market, especially as the alternative is relying entirely on Nketiah for the remainder of the season.

But the young Englishman is a more than capable deputy, in terms of style and in terms of ability. For now, Arsenal need to hope he can put performances together consistently and that the four players behind him and the season’s standout performers so far – Ødegaard, Granit Xhaka, Martinelli and Saka – can continue to both create and take chances to relieve Nketiah of as much of the burden as possible.